Sergeant Verity and the Blood Royal 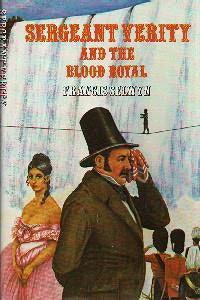 SERGEANT VERITY AND THE BLOOD ROYAL

SERGEANT VERITY AND THE IMPERIAL DIAMOND

FROM :
Inspector of Constabulary, Private-Clothes Detail, 'A' Division

Previous employment
Page and footman to the Dowager Countess Linacre, Royal Crescent, Bath, 1844-49; private, 23rd regiment of foot, 1849; corporal, 1852; sergeant, 1854; present at battles of the Alma, Inkerman, and the Redan: invalided to England and discharged, 1855

Current Duties
Assigned to bodyguard of HRH the Prince of Wales during tour of Canada and the United States, by request of HRH the Prince Consort. Inspector Croaker's obedient and humble reservations as to the officer's fitness for this duty are herewith appended.

Not to be taken from the file

(3)Inflicting grievous bodily harm with a horse-switch on the naked person of a young woman known professionally as 'Miss Jolly', 24 July 1857 (medical report under ref.
Jolly)

Remarks
Lieutenant Dacre remains the most dangerous and determined criminal with whom the Private-Clothes Detail has dealt. Contemptuous of his own safety and that of others, he combined scientific ingenuity and moral ruthlessness. His unique skill with locks and safes led to the removal of five cwt of gold from a sealed bullion van and double-locked safe with no indication of the method used. His delight in cruelty is shown by the manner of drowning his accomplice Cazamian and by the evident amusement afforded him by the whipping of Miss Jolly.

The English Lieutenant lit a long El Sol cigar and stared broodingly across the dark river gorge to the Loudoun heights of Virginia on the far side. At some distance behind him one of his servants held the reins of a pair of sleek geldings, their hides the colour of dark smoke. The animals stood between the shafts of an open carriage, a swan's-neck Pilentum in olive green, the most elegant four-wheeler that Clapps of Boston had ever built. In his cream suiting and dark silk hat, his gold-topped cane under his arm, the Lieutenant seemed as much out of his element as the freshly-painted carriage. The Pilentum and its owner summoned up images of the procession of fashion in Pall Mall, the first day's racing at Royal Ascot, the shimmering brilliance of the Marine Parade at Brighton.

Down to the tips of his white, fine-boned fingers, the Lieutenant appeared as a man born to command others. Even when murder was necessary to his schemes it was carried out, as a rule, by other men. He brooded now on the destruction of a creature who was no more admirable than himself. Under the circumstances, each would have rated the other's life cheaply enough. The young officer's lips moved in a thin quiver of distaste, blowing the first mouthful of acrid smoke into the autumn dusk. On either side of him the woods of the Maryland height were already stripped to black skeletons of their summer glory.

Tall and narrow as a clock-case, he stood with his back against the trunk of a holm-oak, crossing one foot over the other in a manner which instantly conveyed the leisured boredom of a Hussar dandy. He smoked with a petulant impatience, his free hand brushing compulsively over the limp blonde whiskers which adorned his spoilt face. That face was a study in arrogant self-possession. It’s one physical flaw was betrayed by the manner in which the Lieutenant from time to time touched a silk handkerchief to the corners of his pale blue eyes, which seemed to water gently but without respite. The complaint was trivial but incurable. Certainly there was no softness in the tears. The pale blue eyes had watched men die and women scream without reflecting the least emotion beyond an occasional brightening of satisfaction.

The bare cliffs fell away before him to form a magnificent river gorge, where two streams joined as they emerged from their mountain courses and began to cross the broad tidewater plain. Between them, as they converged, an ugly little town stood on a tongue of land. In the late autumn twilight, the two principal streets were easily picked out by the yellow glimmer of regularly spaced oil lamps. Equally distinct were the lights burning on the great iron span of the covered bridge, raised on stone piers, which carried the Baltimore and Ohio railroad across the Potomac, on its way to Washington.

The Lieutenant raised a pair of small field-glasses to his eyes and scanned the shabby conglomeration of railroad offices, hotels, stores and eating-houses which made up the main street of the little town below him. He turned slowly, taking in the drab sequence of warehouses and machine-shops, the tall brick chimney, the terrain of railroad tracks, puddles and mounds of iron pipes. At last his gaze came to rest on the iron span of the bridge, and then he slid the glasses back into their case. From the deep pocket of his long coat he took a small bag of wash-leather. Its weight moved to the metallic shuffle of coins as he shifted his grip. The Lieutenant patted it impatiently, his eyes still watching the railroad bridge.

'Dammit, Charley Temple,' he said softly to the man he could not yet see, 'a fellow that don't care for five thousand chinkers ain't to be trusted with a fourpenny bit in the china dog kennel!'

His drawl and intonation would have sounded almost as odd in London as on the Maryland height. It was the voice of 1809 rather than 1859, echoing the slangy supercilious tone of a Regency buck rather than the conscientious precision of a sober Victorian gentleman. With his way of saying 'goold' for 'gold', 'vartue' for 'virtue', or Taller' for 'fellow', the Lieutenant hinted at long acquaintance with the stubbornly preserved exclusiveness of mess-rooms in fashionable cavalry regiments, select club-rooms in St James's or Piccadilly, and the hunting aristocracy of the Pytchley or the Quorn.

The mimic thunder of hooves on leaf-mould reached him from the lower slope of the woods. A bridle path led upward from the river bank, at the nearer end of the Baltimore and Ohio bridge, almost to the spot where he stood. The Lieutenant pitched away his cigar and stepped back into the shadow of the holm oak.

'Well now, Charley Temple!' he said to himself with a soft satisfaction. 'Well now!'

He never doubted that Charley was moving as quickly as the need for silence allowed. Stealing another man's slave, a fancy-girl at that, was not in itself a hanging matter. But selling her across the state-line to a new master in a free territory was a bad business for an old rascal of Temple's reputation. Always provided, of course, that he was brought to justice for it.

The Lieutenant heard the crackle of brushwood under a man's tread and then saw through the twilight the figure of Temple leading two horses behind him. Bearded and grizzled, the old trader's face combined the sanctimoniousness of a gospel-preacher and the cunning of a horse-thief. Of the two girls mounted on the horses, Jennifer's Asian or Indian beauty made her a slave by colour as much as by descent. Her sheen of black hair lay in a pretty tangle between her shoulder blades, her high-boned olive-skinned face and almond eyes warm with a challenging sexuality. She straddled the horse in tight denim breeches, the slight fullness of her hips and seat suggestively displayed.

It crossed the Lieutenant's mind that the owner of the Richmond whorehouse would have more reason to pursue Temple with a posse of ruffians for the theft of the second girl. Maggie was a slave in practice, but not in theory. She was a pale-skinned, hazel-eyed young woman, the curtains of her blonde hair sweeping loose to her shoulders. She had, of course, been broken to the bondage of the brothel as completely as Jennifer. The limit of her ambition to be free was merely that she should be traded with the Asian girl, to whom she owed her only attachment in the world.

The Lieutenant stepped out of the shadow and greeted these arrivals. Temple helped the two young women to dismount.

'Dammit, Charley,' said the young officer genially, 'ain't you got a way for keepin' a fellow at a stand by the hour together? May I be cursed if it's short of nine o'clock now!'

Temple twisted his mouth and spat accurately to one side.

'You know a quicker way across that river, mister, you're sure as hell welcome to try it.'

Asimov's Science Fiction by Penny Publications
In The Cut by Brathwaite, Arlene
Lyfe Changing by Desirae Williams
Parrot in the Pepper Tree by Chris Stewart
Natural Law by Joey W. Hill
The Sons by Franz Kafka
A Basket Brigade Christmas by Judith Mccoy Miller
The Fling by Rebekah Weatherspoon
The Curse of Salamander Street by G.P. Taylor
Laguna Nights by Kaira Rouda