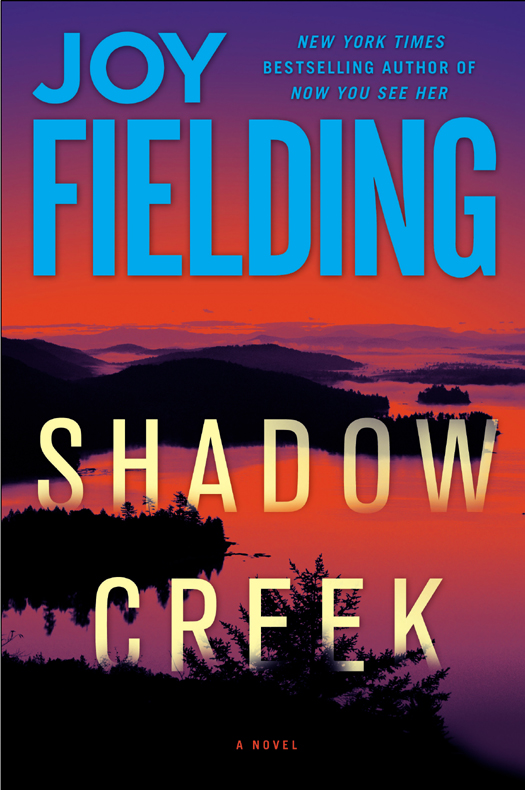 Now You See Her

Tell Me No Secrets

The Best of Friends

Home Invasion
(for Good Reads, a project designed to encourage adult literacy by creating short novels for adult readers about adult stories and themes, but written at a very simple level)

All rights reserved. The use of any part of this publication, reproduced, transmitted in any form or by any means electronic, mechanical, photocopying, recording or otherwise, or stored in a retrieval system without the prior written consent of the publisher—or in the case of photocopying or other reprographic copying, license from the Canadian Copyright Licensing Agency—is an infringement of the copyright law.

Published in Canada by Doubleday Canada, a division of Random House of Canada Limited

As always, my sincere thanks to Larry Mirkin and Beverley Slopen, great friends and wonderful critics who graciously read my manuscripts during various stages of completion, and offer invaluable advice and encouragement. Thanks also to my terrific agent, Tracy Fisher, at WME Entertainment for her continuing guidance, hard work, enthusiasm, and wisdom. To my editor, Emily Bestler, her assistant Kate Cetrulo, copyeditor Tom Pitoniak, and everyone at Atria, thanks for all your assistance. A special thank-you as well to Kristin Cochrane, Nita Pronovost, Adria Iwasutiak, Val Gow, and everyone at Doubleday Canada, as well as to my many foreign publishers and translators. I may not always understand you, but you’re clearly doing something right.

And a big virtual hug to all my readers, especially those who e-mail their appreciation of my efforts, those who show up at my various
speaking engagements and public appearances, and those who read my monthly newsletters and follow me on both Facebook and Twitter. In what has been an occasionally difficult year—those who read my monthly newsletter and follow me on Facebook and Twitter will understand what I’m talking about—your support was, to borrow a much used and abused word, awesome.

And lastly, some words of thanks and, above all, love to my husband, Warren, and our daughters, Shannon and Annie. (An extra-extra-special thank-you to those who purchased Shannon’s CD,
No More Cinderella
, through her website, Amazon, or iTunes. Those of you who haven’t as yet, please go to her website at
shannonmicol.com
and do so immediately. Sorry—what can I say? I’m a mother!)

And a grandmother! So, thank you, Courtney, for being such a great dad to my gorgeous grandson, Hayden, and to Hayden, for being the sweetest little boy who ever lived.

I
T WAS A DARK and stormy night,’ ” Ellen said, reciting the infamous opening line of some long-forgotten novel. The sentence had the dubious honor of having once been voted the worst opening line of a book ever, although Ellen didn’t think it all that bad. If pressed, she was fairly certain she could come up with worse, although admittedly, her once-prodigious memory was no longer what it was. But then again, she decided with a laugh, what was?

Her laugh was surprisingly youthful for a woman her age, more like the giggle of a teenage girl than that of a woman who had recently celebrated her seventieth birthday.

“It certainly is that,” her husband of almost fifty years agreed. Stuart Laufer embraced his wife with unusually muscular arms for a man closing in on seventy-five, and together they
stared out the window of their old log cottage at the surrounding trees, whose branches were being whipped into a veritable frenzy by the formidable winds.

It had been raining for almost five hours, the downpour having started at just past three o’clock that afternoon. A series of dark, menacing clouds had appeared out of nowhere, crowding the sky and quickly overwhelming the weak sun. Large, heavy pellets of rain followed almost immediately, bullets from a celestial machine gun. Then came the wind, accompanied by loud bursts of thunder and wild streaks of lightning, then more wind, more lightning, more bullets. Beautiful, Ellen had marveled. Terrifying, too, as beauty often was.

I was beautiful once, she thought.

“This is way too violent to last very long,” Stuart had said earlier, as if to assure them both. “Guess I was wrong,” he’d later admitted as the afternoon stretched into the evening and was swallowed by the ever-darkening sky. The lights in the small cottage began flickering on and off, casting vague, animal-like shadows on the white walls. “I better light a fire in case we lose power,” he said now.

“ ‘I’ll huff and I’ll puff and I’ll blow your house down,’ ” Ellen whispered to herself, recalling the fairy tale of the three little pigs and the big bad wolf, which her mother used to read to her when she was little. Unexpected tears suddenly filled her deep-set blue eyes. Amazing, she thought. Here she was, seventy years old and still crying for the mother she’d lost almost twenty years earlier. As if she were still that little girl curled up in her mother’s lap, wrapped in her protective arms. How much she still missed her—her mother’s absence almost as strong as her presence had once been. Ellen could still feel the softness of her mother’s lips against her forehead, still see the pride in her eyes whenever she looked her way, still hear the drama in
her voice as she read aloud from the Brothers Grimm. Ellen had always assumed she’d read those stories to her own children one day, and after that to the grandchildren who would surely follow. But neither of her sons had ever shown much interest in fairy tales and they rarely sat still long enough for her to get out more than the obligatory “Once upon a time.” They’d squirreled out of her lap whenever she’d tried to corral them, preferring toy airplanes to books, and later, girls to just about anything else. Both boys, now grown men of forty-three and forty—was it really possible?—had married women they’d met while away at college—Berkeley for Todd, Stanford for Ben—and moved to the opposite side of the country. Neither marriage had lasted more than a couple of years, and both men had married again, Ben several times, the latest to a pole dancer from Russia. The various marriages had produced five children, three boys and two girls—Mason, Peyton, Carter, Willow and Saffron—where did they get these names?—all of whom were now young adults and none of whom had any connection to their paternal grandparents back east. Ellen couldn’t remember the last time she’d spent significant time with any of them. For years she’d sent money at Christmas and at birthdays. Sometimes she received a thank-you note. More often than not, she didn’t. She’d complained to her sons, but they claimed to be powerless. “Ex-wives,” Ben had said with a shrug, as if this explained everything. Ellen had recently tried communicating with her grandchildren via e-mail, but her brief inquiries into their health and well-being had gone unacknowledged. She doubted that any of them would bother showing up for the fiftieth-anniversary party she and Stuart were planning for the fall. Whatever happened to “happily ever after”? she wondered now.

Ellen heard Stuart grunt and his knees crack as he bent
down to arrange the logs in the old stone fireplace. She studied his weathered but still handsome face, his soft brown eyes narrowed in concentration, his wide brow furrowed, as his fingers, their knuckles swollen with arthritis, struggled to light a long match. Despite the years, the man was still a sight for sore eyes. Even after all this time, he still made her heart flutter. Amazing, Ellen thought, wondering at her good fortune, and feeling guilty she hadn’t been able to pass that same luck on to her sons.

Except that marriage was as much about hard work as it was about luck, she understood. And it hadn’t all been wine and roses, peaches and cream. There had been days, sometimes even weeks at a stretch, when the thought of Stuart disappearing under the wheels of a bus had been more than casually appealing. There had been times when she’d considered leaving him, once when she’d actually had her hand on the telephone, the phone directory on the kitchen counter open to the listing of prominent New York divorce attorneys.

But then she’d remembered a piece of advice her own mother had given her, about when times got tough to remember the reasons she’d married Stuart in the first place, and she’d thought of his sweet smile and his sly sense of humor, and the way his gold-flecked brown eyes lit up whenever she walked into the room. Soon she was recalling various random acts of kindness, thoughtful gestures, and the gentle way he always touched her, how she loved his keen mind and his open heart. And soon, the yellow pages would be back in the drawer, and she’d be cooking him his favorite dinner of macaroni and cheese. Which was something else she loved about him—that he was so easy to please.

It didn’t hurt that their sex life had always been active and fulfilling. Even now, at their advanced age, they still made love
often and enthusiastically. While the acrobatics of their youth may have disappeared, their ability to please one another had not. “You know what the most common form of sex is among senior citizens?” Stuart had once asked, looking up from the morning paper he was reading. “Oral sex,” he’d continued with a wink. “Are you saying they just talk about it?” Ellen had quickly countered. How they’d laughed.

She laughed again now, marveling that so many of their friends had all but abandoned lovemaking in the latter years of their marriages, some seemingly without regret. Not that she and Stuart had very many close friends anymore, other than Wayne and Fran McQuaker, she realized sadly, having lost several friends to cancer and others to the simple vagaries of time. The laugh quickly died in her throat.