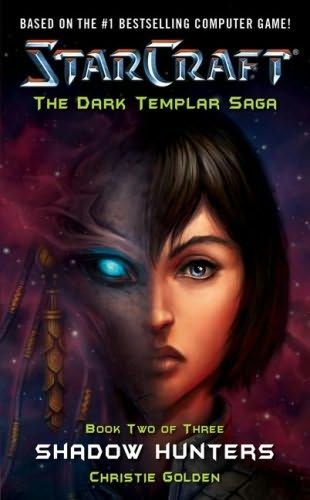 This book is a work of fiction. Names, characters, places, and incidents either are products of the author’s imagination or are used fictitiously. Any resemblance to actual events or locales or persons, living or dead, is entirely coincidental.
www.SimonandSchuster.com

All rights reserved, including the right to reproduce this book or portions thereof in any form whatsoever. For information address Pocket Books Subsidiary Rights Department, 1230 Avenue of the Americas, New York, NY 10020
www.SimonandSchuster.com

This book is dedicated to Chris Metzen, Evelyn Frederickson, and Andy Chambers, with deep appreciation for their support, enthusiasm for my work, and their abiding passion for the game of StarCraft.

IN THE DARKNESS, THERE WAS TERROR.

The news had come three days ago from Artanis, the youthful new leader. The unthinkable was happening. Their world was about to be destroyed. Aiur, beautiful, beloved Aiur, which had seen and survived so much, would soon become unrecognizable.

Come to the warp gate,
they had been told.

At first, everyone had tried to gather too much, of course. Evacuation is never a leisurely business and there was much to choose from, beautiful homes filled with beautiful things. Cherished family heirlooms? Precious khaydarin crystals? Clothing for the journey? All this and more eventually was discarded as of no value at all as the true urgency of the situation became starkly clear. Heavily armored shuttles and small atmospheric vessels were crammed with too many people, or departed without enough, all heading for the single functional warp gate left on the entire planet. Scouts flew escort when they could, firing at the waves of maddened, disoriented zerg that covered the once-lush earth like a sickening living carpet. Reavers trundled into the worst of it, the automatons saving lives while dragoons and zealots slaughtered zerg by the hundreds. The best they could hope for was to clear enough space so that the shuttles could disgorge their precious living cargo within reach of the gate.

The gate was large and wide, but not sufficiently large or wide to accommodate the terrified crowds that surged toward it. A long line of stalwart high templar stood, the last bastion of defense between the fleeing crowds and the monsters who had nothing but the urge to kill driving them.

Ladranix stood among their number. His once-gleaming gold armor was covered with ichor, melted in spots where acid had splashed on it. Beside him stood Fenix, an old friend from many battles, and the terran Jim Raynor, a new friend who had proved himself but recently. It was all happening so quickly—the courageous death of the noble Executor Tassadar, the revelation of the existence of the dark templar and word of reunion with their once-shunned brethren, the descent of the zerg.

Now they were fleeing to Shakuras, those who could make it. Those who had transportation, who could still walk or run or crawl through the portal. Smoke filled the air, and the sounds of battle, and the horrific chittering of the zerg as they came in wave
after wave to slay and be slain, by the protoss or their own kind, it mattered not to them.

But the protoss themselves uttered no sound. Briefly Ladranix permitted himself to wonder what the terran thought of it all. If only he could “hear” in his mind what Ladranix heard—the fear, the resolve, the rage; Raynor would not think the protoss a silent race as he likely did now.

And then the gate flickered. The emotions that were already buffeting Ladranix like something physical increased, and even he, mentally disciplined as he was, staggered briefly under the telepathic bombardment.

“What the hell’s happening?” Raynor shouted, habit, even though the terran knew that all he needed to do was think the words and they would be heard.

The response came back at once, from whom Ladranix was not certain. His focus was on rending to pulp the four zerglings who were scrabbling and tearing at him.
We are disabling the gate. We must. Several zerg have already gotten through. We cannot risk more. Shakuras must survive. Our people must survive. I only hope we are not too late.

A psychic wail went up and Ladranix actually stumbled for a dangerous moment. Horror. Anguish. Loss—aching, wrenching loss. What would they do? How could they go on? Alone, alone, so alone …

There was nothing to be done but fight.
Flee!
Ladranix sent with all the energy that was in him. The
shocked protoss recovered, and scattered every which way.

Grimly, Ladranix and the others kept killing, hoping to buy the few seconds or moments that would mean life to others. He knew their own lives were already lost.

IN THE DARKNESS, THERE WAS ORDER.

Her haven was inviolable. She was queen of all she surveyed, and her vision was vast.

What those who served her unquestioningly knew, was her knowledge. What they saw, was her sight. What they felt, were her feelings. Unity, complete and utter, shivering along her nerves, racing in her blood. A unity that began with the lowest and most base of her creations and ended with her.

“All roads lead to Rome” was a saying she remembered from when she was weak and fragile, her mighty spirit encased in human flesh, when her heart could be softened by such things as loyalty, devotion, friendship, or love. It meant that all paths led to the center, to the most important thing in the world.

She, Kerrigan, the Queen of Blades, was the most important thing in the world of every zerg who flew, crept, slithered, or ran. Each breath, each thought, each movement of the zerg, from the doglike beasts to the mighty overlords, lived but by her whim. Lived to service her whim.

All roads led to Rome.

All roads led to her.

She shifted in the damp, dark place, flexing wings that were sharp and bony and devoid of membrane as she might have rolled her neck to ease tension when she was a human woman. The walls pulsated, oozing a thick, viscous substance, and she was as aware of that as she was of the larvae hatching in the pods, as she was of an overlord on a distant planet assimilating a new strain into the whole. As she was of her own discontent.

Kerrigan rose and paced. She was beginning to grow impatient. Before her arrival as their queen, she knew, the zerg had had a mission. To grow, to absorb, to become perfect, as their creators had wanted them to be. Their creators, whom they had turned on without so much as a breath of conscience. Sarah Kerrigan understood the idea of “conscience.” There had been moments, even in this glorious new incarnation, where she had had twinges of it. She did not see such a thing as a weakness, but as an advantage. If one thought like one’s enemies, one could defeat them.

The zerg were still on that mission under her guidance. But she had brought something new into the mix: the pleasure of revenge and victory. And for too long now, she had been forced to rest and recover, lick wounds, and fall back on the original mission.
Certainly, she had not been idle over the last four years. She had rested here on Char, had found new worlds for her zerg to explore and exploit. The zerg had thrived under her leadership, had grown and advanced and improved.

But she hungered. And that hunger was not sated by moving from planet to planet and simply re-creating and improving zerg genetics. She hungered for action, for revenge, for pitting her mind—keen even as a human’s, awesome in its ability now—against her adversaries.

Arcturus Mengsk, self-styled “emperor” of the Terran Dominion. She’d enjoyed playing with him before and would again. It was why she had let him survive their last encounter, why she’d even tossed him a few crumbs, just to ensure he’d make it.

Prelate Zeratul, the dark templar protoss. Clever, that one. Admirable. And dangerous.

Unease fluttered inside her, quickly quelled. Once, before her transformation, she had cared for the easygoing marshal. Perhaps she had even loved him. She would never know now. It was enough that thoughts of him were still able to unsettle her. He, too, was dangerous, although in quite another way than Zeratul. He was dangerous for his ability to make her … regret.

Four years of waiting, gathering strength, resting. She had been sick of slaughter, but no more. Now that she—

Kerrigan blinked. Her mind, processing at light speed, sensed something and latched onto it. A psionic disturbance, far, far distant. Of great magnitude—it would have to be for her to have picked up on it from so far away. But then again, she herself had been able to telepathically contact Mengsk and Raynor when she was undergoing her transformation—touch their minds and cry out for aid. Aid which had not come in time, and for that, she was grateful, of course. But what was this, that sent ripples out as if from a stone tossed into a lake?