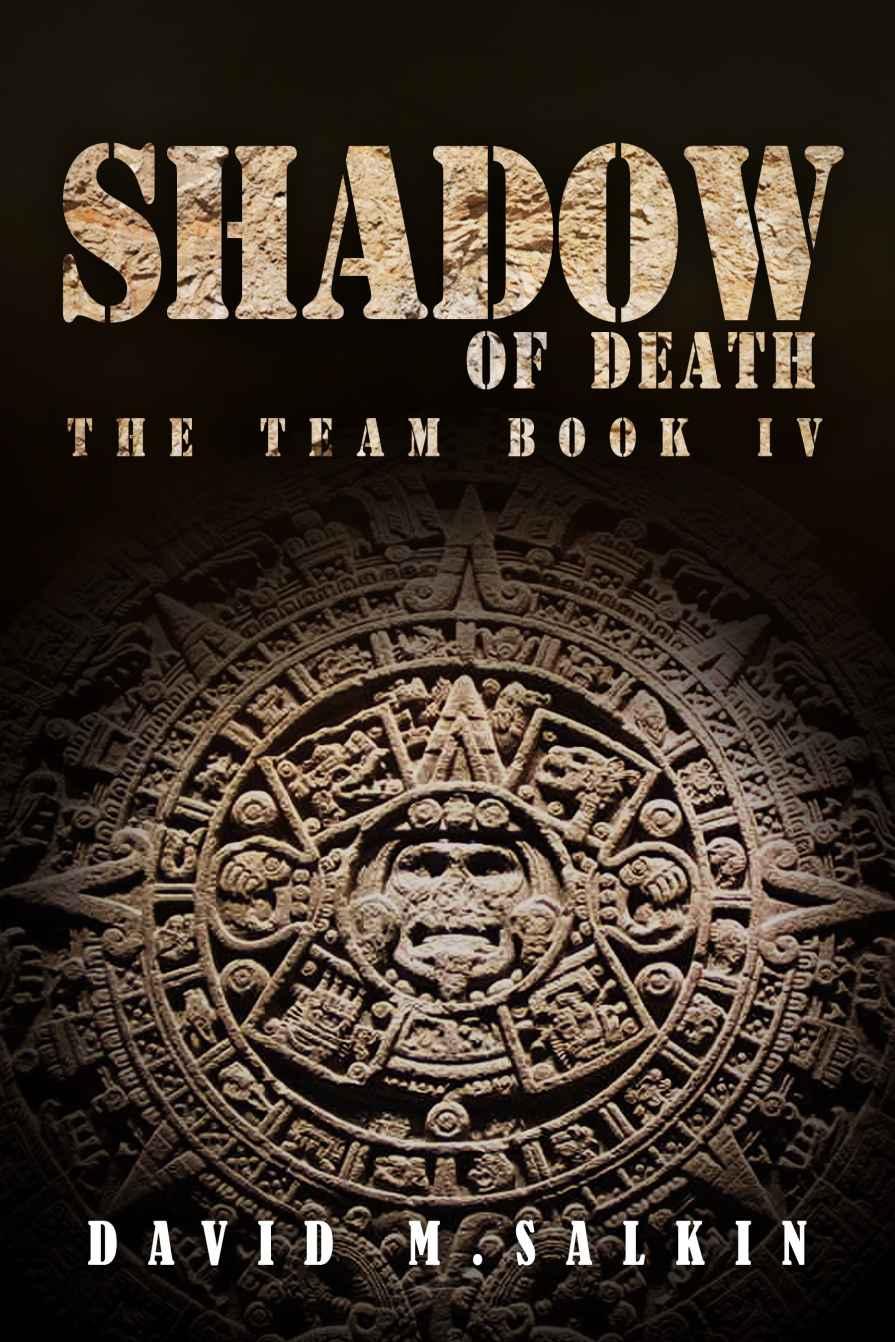 Book One: The Team

Book Two: Into the Jungle

No part of this book may be reproduced, stored in a retrieval system, or transmitted by any means without the written permission of the author and publisher.

Writing
The Team
series continues to be a labor of love. I feel like I know these imaginary friends, and often meet servicemen and women who emulate some of the finer traits of my fictitious team. While researching for the book, and then having discussions after I finished writing it, I realized that some of what I
thought
was fiction turns out not to be so. Apparently, some of my imaginary special operations teams and toys actually
do
exist, which I think is pretty darn awesome.

The world continues to be a dangerous place and appears to grow more violent and hateful every day. While I choose to live my personal life focused on the positive and maintain my optimism, I know I’m only able to do that because so many men and women serving in uniform, or plain clothes, are out doing what needs to be done in dangerous conditions all over the world. As always, I salute those who serve, or have served, this great nation. If nothing else, America continues to prove her resiliency.

To the men and women at SOUTHCOM who run special operations in everything from the war on drugs to counterterrorism, thanks for what you do!

My thanks to friends in uniform who have offered technical assistance in the writing of this book: Cols. Bill Peace, Jeff Cantor, and Kevin White (call sign TK); S/Sgt. Nicole Rosga (call sign Roz); and Cpl. Conor Hamill, USMC. Any mistakes are mine, I can assure you. I just make stuff up . . . these peeps actually DO it.
Respect
~

As usual, my books contain the names of many friends, always used without their permission or consent . . . which is why you should always be nice to me. My buds for life, Chris Cascaes, Jon Cohen, and Apo Yessayan, all make appearances. Poor Apo . . . his character looks nothing like my handsome friend. Apo’s Armenian history, while not
his
exact story, does reflect an almost unknown piece of ugly history, and the slaughter of perhaps a million human beings. On behalf of Apo and his family, I bring light to the Armenian genocide out of love and respect for my friend.

My thanks to the folks at Post Hill Press—Anthony Ziccardi, Michael L. Wilson, and all the peeps behind the scenes—who help me live the dream of being a full-time author. One of these days, we’ll all sit together and watch these on the big screen somewhere! And to Jon Ford, an outstanding editor, thank you for your attention to detail and help in making this book better.

Finally, thanks to Big Brother Eric for suggestions and feedback to make this a better book.

This book, as always, is dedicated to family and friends, both here and departed.

For Patty, Rachael, Alex—you’re MY team.

And, I want you all to remember the number 22.

That’s the average number of veteran suicides in the United States
every day
. If you see a friend in need, reach out. There are
so many
phone numbers available. Please, vets, know you’re loved and never alone.

This book is for number 23—the veteran so close to quitting, but recognizing the need for help, and having the strength not to give up. Your family and friends are glad you’re still here. Suicide doesn’t end pain. It just passes it to someone else.

It was almost midnight. The small group of men smoked Iranian cigarettes and drank strong black coffee. The wood stove kept the room comfortable in the cold night air. The leader of the group, a tall, thin man they all simply referred to as Qassim, stood by the doorway of the remote farmhouse. He had been watching the trucks’ headlights approaching for twenty minutes across the barren, dark desert. The headlights were the only source of light outside the farmhouse for almost a hundred kilometers.

North, up in Al-Raqqah, the ground was fertile and a river ran through the city. Here, further south, the land was a flat, desert wasteland. The trucks they were waiting for were the first vehicles in four hours. With ISIS patrols murdering civilians as they pleased, remote areas like this one were largely off-limits.

Qassim grunted and the men at the table rose and picked up their AK-47 assault rifles. The five of them walked outside the warmth of the cabin and spread out around the small compound. A moment later, the three trucks rolled in. Two pickup trucks, one with an unmanned machine gun mounted in the back, escorted the larger box truck.

Qassim stood and waited for the men to get out of the vehicles. The leader of their group gave Qassim a formal greeting and then introduced one of the men he was transporting. The man extended his hand and said hello in Spanish, introducing himself as Antonio Reynosa. Qassim and the man spoke Spanish for quite a while, surprising the men around them. Qassim’s own people didn’t know he spoke Spanish, and they certainly didn’t understand the conversation—except for
one
man, who spoke seven languages, the first of which was English.
That
man, who had been using the name Hussam for the purposes of this mission, was equally surprised at the conversation. A deep-cover CIA operative, Hussam was there to gather intelligence on ISIS. He hadn’t anticipated this turn of events.

Hussam feigned disinterest, like his cohorts who didn’t understand what was being said. But Hussam hung on every word. To hear the two men discussing “the deal” between ISIS and Las Zetas had made Hussam’s head spin. He kept his breathing and expression normal, even though the conversation he was eavesdropping on was a game changer.

Qassim ordered his men to guard the trucks, and the visitors were brought into the house to be fed and allowed to sleep for a few hours. Hussam maneuvered himself to guard the door of the house, where he hoped to listen further. The others were happy to sit inside the trucks where it might be a bit warmer. When one of them walked to the rear of the box truck, Qassim barked at him to stay away. He was to guard it—not look inside. Hussam wondered if he’d get the chance to look later if the others fell asleep.

The team had spent almost two months away from HQ and, for the most part, each other. After returning from their mission in the Democratic Republic of the Congo, it was time for funerals, doctor visits, and soul searching. The mission in Africa had been costly. Ernie and Smitty had died together while fighting a delaying action to allow their team to escape. Jones died in the shantytown firefight. Cory had been double-crossed and set up at a meeting that cost him his life. Lance Woods, Jake Koches, and Eric Hodges had all been wounded seriously enough to require extended hospital stays—whether or not they’d be medically retired remained to be seen. When it was all said and done, the team had been cut in half.

Chris Mackey had said his goodbyes after the last of the funerals and disappeared. Chris Cascaes knew he’d eventually hear from his old friend, but it would most likely take some time. Mack was “headed south to buy a boat.” Whether that meant the Florida Keys, Mexico, or the Caribbean, Cascaes had no idea. Wherever it was, it would be some place quiet with a well-stocked bar. His days in the Company were over, and he’d be missed.

Julia and Cascaes continued their romance after they returned home, but as much as they were in love, they knew their relationship was doomed if things remained as they were. Julia had been CIA and was used to a “quieter” type of operational reality. Cascaes was a SEAL Team leader turned black ops leader and would be traveling with his men in continued combat capacities. There was no way a romance between the two of them could continue if they worked together in the field, and it didn’t look much more promising if they worked separately. Neither of them spoke about it much. Instead, they tried to enjoy perfect days together and ignored the elephant in the room. When it finally came up between them, Cascaes paid Dex a visit.

Dex was seated at his oversized desk behind two computer monitors, with three televisions running silently on the far wall. Fox, CNN, and Al Jazeera news all had crawls running beneath their latest stories. He was reading a briefing when Cascaes was led into the office.

Dex stood up and greeted Chris Cascaes with a firm handshake followed by a big hug. The two of them sat down in chairs near a coffee table.

“Of course.” Dex poured two black coffees that were strong enough to wake up a corpse. They each took a sip and settled back into their chairs, waiting for one of them to start. They hadn’t seen each other since the last funeral and had spoken only briefly when Chris had asked Dex for a meeting.

“Thanks for meeting with me, Dex. I know you’re swamped. Listen—there’s no easy way for me to say it other than to just spit it out. I’m done, boss.”

Dex scowled. Although not shocked, it made him sick to hear it. “Chris—I get it. You’re burnt out. I’ve had you all over the globe. The last mission was too costly. It gets personal, I understand. But you have to understand my position. Mack is out. One of my top operators for decades—
gone
. If I lose you now, it really jams me up. How about you just take some time off? As much as you need. A leave of absence. Call it whatever you want. Just take some time—but don’t
quit
. Not now.”

Chris half-smiled. “Yeah. I guess you would.”

Dex leaned forward on his knees, closer to Chris. “Look, Chris—we both know field agents can’t have romances for a million reasons. We also know it happens all the time. We’ll figure something out. We’ll find a work-around. But I can’t have you just quit. Wait—Julia? Is she quitting, too?”

“Leave of absence.
With
pay. As long as you need. Check in with me in one month. I won’t call, I promise. One month. Julia doesn’t need to come in—you just tell her. Then we’ll talk again, okay?”

“One month with pay for both of you. That’s decent money. We owe you that much anyway. If you walk, you keep the money, no harm, no foul. Meeting’s over. We talk in a month.” Dex stood up. The men shook hands and stared at each other for a second, then Chris turned and left.

“I’ll call you in a month—from someplace sunny.”

“You going to tell the team?”

Cascaes sighed again and stared at the ceiling. “I’ll call you from someplace sunny—after I tell my guys.”

Celtic Magic by Amber LaShell
Heaven Sent by E. van Lowe
The City Son by Samrat Upadhyay
The Chessman by Jeffrey B. Burton
Fathers & Sons & Sports by Mike Lupica
Fugly by K Z Snow
Beyond Ransom (The Ransom Series) by Douglas, A.T.
The Ranch by Danielle Steel
Beautiful by Ella Bordeaux
The Testament by Elie Wiesel