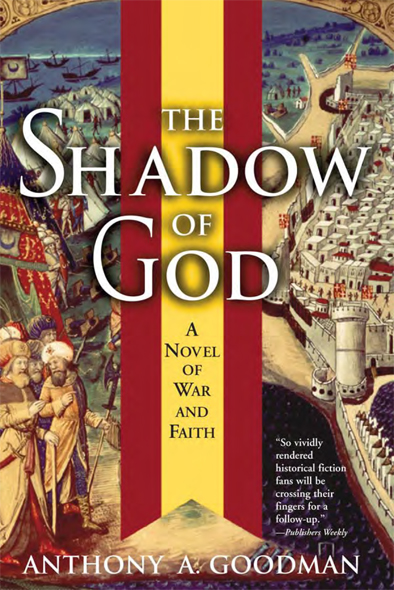 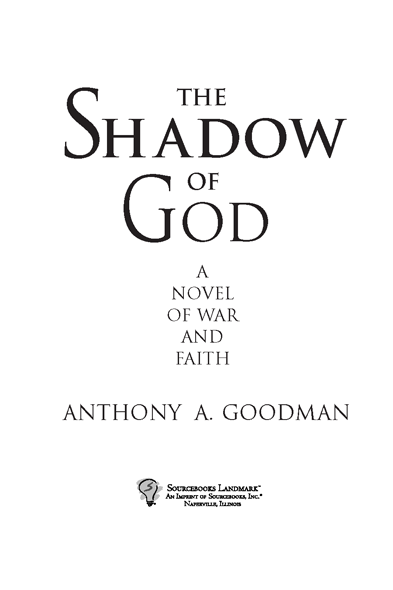 This novel is a work of fiction based on historical events. Any historical names, characters, and incidents used fictitiously are done under the understanding that such representations are not meant to accurately portray actual people or events.

All rights reserved. No part of this publication may be reproduced in any form or by any electronic or mechanical means including information storage and retrieval systems—except in the case of brief quotations embodied in critical articles or reviews—without permission in writing from its publisher, Sourcebooks, Inc.

The shadow of God: a novel of war and faith / by Anthony A. Goodman.

This book could not have been written without
the love and support of my wife, Maribeth, and
my children, Katie and Cameron.

Men never do evil so completely and cheerfully as
when they do it from religious conviction.

Book One: Never the Twain Shall Meet

2. The Shadow of God

4. The Palace of the Cannon Gate

10. The End of the Beginning

19. The Beginning of the End

22. From the Ends of the Earth

Epilogue: “Nothing So Well Lost.”

In the fifty years surrounding the turn of the sixteenth century, the world witnessed changes that surpassed almost any previous era in human history. East and West collided on a scale that spanned thousands of geographic miles, at a cost of hundreds of thousands of human lives.

In the Middle East, five centuries of Christian Crusades were coming to an end. The waves of European armies sent forth to protect Christians traveling to Jerusalem and to slaughter the Muslim Infidels were in retreat. The uses of gunpowder were expanded and refined. New cannons were forged with huge cannonballs, and remarkable accuracy. Muskets and rifles were used alongside the crossbow and lance. Fortifications were massively strengthened to meet the increase in firepower.

In the Holy Lands, the fortresses of Jerusalem, St. Jean d’Acre, and Krak de Chevaliers successively fell before the Muslim armies, driving the Christian Crusaders to still another far-off fortress and still another confrontation with Islam in
Outremer
. Ottoman Sultans of Turkey, who had conquered the lands of the Arabian Peninsula, embraced the fast-growing religion of Islam. At the dawn of the sixteenth century, Muslim and Christian, East and West, were about to meet in the final battles for dominion.

This is the story of those final days.

Though this book is a work of fiction, almost all of the characters in it are based on historical figures. Today, we are fortunate to have access to the writings of many contemporary observers who
were on the scene at the time. There were ambassadors and envoys who spent decades at the inner court of the sultans. And there were soldier-writers who participated in the battles, who kept voluminous diaries and wrote detailed letters home, many of which have survived to this day. Though each observer may have been biased by his or her particular position in society, we can still get a well balanced and detailed picture of the period.

I believe that historical fiction can serve the dual, and not contradictory, purposes of entertaining as well as educating. History has too often been left to the writers of textbooks, and has been overburdened with dates and minutiae. The peoples of the era are often placed in a position secondary to the events. I hope that the story of
The Shadow of God
will allow an understanding of the hearts of the people as well as the events in which they participated.

Nearly five hundred years after the era of this story, much has changed in our world, and much has remained the same. Unfortunately, many followers and true believers of the great religions of the world have little tolerance for those who do not share their own specific beliefs. This intolerance seems to have intensified over the centuries. On many fronts, religion has severed its ties to spirituality; compassion is losing the battle against prejudice. There have been moments in time when some of the believers made room in their hearts for those with different beliefs. We can only hope that such a time might yet come again.

Suleiman. The Magnificent. Kanuni.
The Lawgiver. Son of Selim, the Grim.

Piri Pasha.
Grand Vizier of Selim and of Suleiman. Descendent of Abu Bakr, Companion to the Prophet, Mohammed.

Ali Bey.
Agha of the Azabs.

Bali Agha.
Agha of the Janissaries. “The Raging Lion.”

Achmed Agha.
Third Vizier. Albanian, promoted to
Beylerbey
of Rumelia after the capture of Belgrade.

Qasim Pasha.
Son of a slave of Bayazid II. First in the ranks of heroes of Anatolia. Commands forces opposite Post of England.

Cortoglu.
A Corsair, Naval Chief-of-Staff under Pilaq. But, in reality, in charge of the entire naval fighting force at Rhodes.

Gülbehar. “
Flower of Spring.” Suleiman’s First Woman of the harem, and mother of his first child, Mustapha.

Khürrem.
Suleiman’s Second Woman of the harem. “The Laughing One.” Later to be named La Ruselanna, (the Russian) and finally known to history as Roxelanna.

Dr. Moshe Hamon.
Physician to the Sultan. Son of Joseph Hamon, first of the dynasty of Sephardic Jewish doctors who were physicians to the Ottoman Sultans.

Knights and Their Langues

John Buck.
England. Lieutenant to the Grand Master. Turcopilier (Commander of the Cavalry).

Just One Golden Kiss by M. A. Thomas
The Art of French Kissing by Kristin Harmel
Mr. Darcy Goes Overboard by Belinda Roberts
1954 - Mission to Venice by James Hadley Chase
Through The Pieces by Bobbi Jo Bentz
Glass Heart by Amy Garvey
Wild Bride by Jill Sanders
The Lingering by Brown, Ben
Did Not Finish by Simon Wood
The Cheating Heart by Carolyn Keene