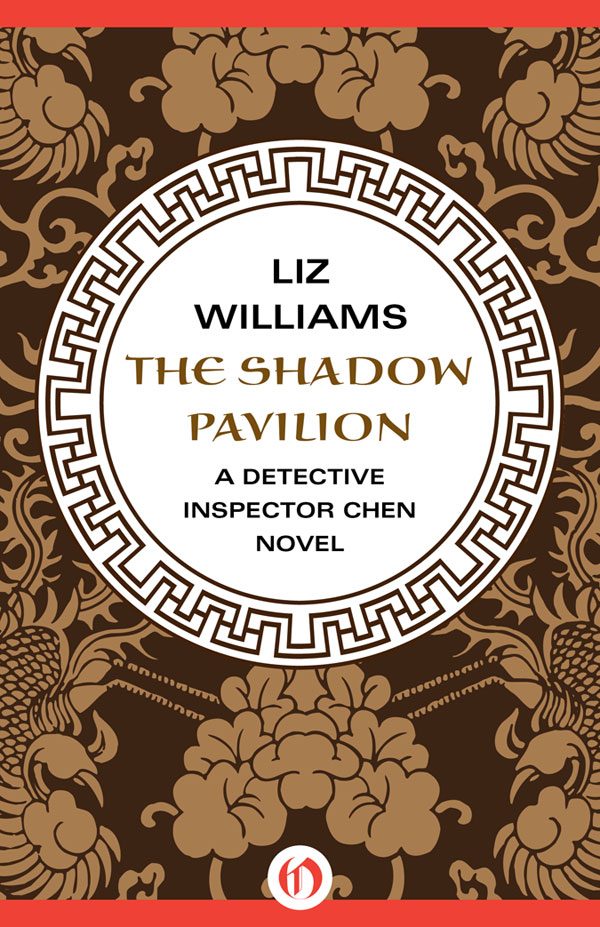 PRAISE FOR THE WRITING OF LIZ WILLIAMS

“
Williams has an astonishing ability to create strange worlds and complex characters with only a few words. She finds new tangents with standard myths â¦ and uses non-Western concepts â¦ to great effect.” â
Publishers Weekly

“
This exotic amalgam of police procedural, SF, comic fantasy, and horror is a delight from start to finish.” â
Locus

“
Williams joins A. A. Attanasio and China MiÃ©ville as one of the best contemporary practitioners of a kind of imaginative literature that fuses the intellect of SF with the heart of fantasy.” âSciFi.com

“
Williams's language is lyrical and elegantâ¦ . The dialogue has a patina of Britishness about it that adds to the feeling of other that permeates the book. The first in a series,
Snake Agent
set the pace for what will no doubt be an exciting and worthwhile series. I am looking forward to the next â¦ Inspector Chen novel.” âBookslut

The Demon and the City

“
Like all of Williams's work, this is a smooth, sharp read. She turns the conventions of good and evil on their ear and gives them a good sharp boot in the rear.” âJay Lake, author of
Mainspring

P
auleng go ducked
as the whisky bottle hurtled toward his head and smashed on the opposite wall. He cried out in anguish.

“Lara! Sweetheart! Darling! That was a twenty-five-year-old malt!”

She knew it, too, the bitch. He'd seen her hand pause over an indifferent bottle of Tokyo Gold, before clamping firmly around the neck of the Lagavulin.

“You can afford it!” Lara shouted, at window-rattling volume. “Take it from the money you've cheated me of, why don't you?”

“Lara, look. I sorted all this out with Beni, you know I did and I know he told you about the new studio rates. Things are hard, even in Bollywood: you know about the tax thing, Beni
explained
. Don't you remember?”

Of course she didn't. He'd be amazed if she could remember what she'd had for dinner last night.

“Lara
â¦
put the Chateau d'Yquem
down,
there's a love.”

Sixty dollars a bottle and no doubt that would soon be joining the whisky-sodden wallpaper. It wasn't the money. It was almost a crime against God. To Go's surprise, however, Lara did as he asked her. She set the bottle carefully down on the table, turned on her kitten heel, and left, with a glowering ebony glance over her silken shoulder. Go could hear the deathwatch tapping of those heels all the way down the marble hall. With a sigh of mingled exasperation and relief, he picked up his cellphone and put a call through to Beni.

“The thing is
â¦
” Beni was saying, twenty minutes later, for the third time. “The thing is, we can't get rid of her. Audiences love her and you know why, it's all due to herâ”

“Yes, sure, I know,” Go replied. There were some things he didn't want discussed over the phone, even though it was supposed to be a secure connection. “I know, I know all that stuff. But she's seriously nuts, Beni.”

“You're saying it's our fault?”

“We got her the gig. And the one before that. And theâ”

“âone before that,” Go finished for him. “You're right. I suppose now we've just got to deal with the consequences.”

That evening, he sat down in front of
The Wild and the Blessed
. The first gig
â¦
It had been the first time he and Beni and Lara had worked together, before he'd really understood about Lara. He knew what the deal was, of course: he'd been there from the start. But he hadn't really got his head round all the ramifications. And
Wild
had been, well, wild. How could you not fall in love with Lara Chowdijharee? Stunning girls were as common as beetles in Bollywood, but Lara was
â¦
well, Lara was something else.

Being nearly brained by a full bottle of your best malt tended to put the dampeners on starry-eyed romance, however. It wasn't the first time it had happened. The rot had started to set in toward the end of the second movie,
The Wild and the Damned
. Lara had been playing the same characterâsweet, selfless Ranee Purâbut somewhere along the line she'd started asking for script changes, and getting them. Character changes, too. Big ones. Goâwho had after all been responsible for the initial scriptâhad never really envisaged Ranee as the AK-47-toting kind of girl, somehow. Audiences seemed to have taken it in their stride, however, and Go couldn't deny that it had seemed to speak to the modern Indian woman. There were Ranee car fresheners and fridge magnets, Ranee underwear and mouse mats. Lara was under round-the-clock protection, though whether they were protecting Lara from the crazier fringes of her devoted fans, or the crazier fringes from Lara, Go did not really care to consider too closely. Given how she'd begun to treat her producer and her agent, God alone knew how she'd deal with some poor benighted stalker.

Go had been in the industry too long, however, not to recognize the feeling of being held facedown over a barrel, with legs firmly spread. When the last credits of
The Wild and the Blessed
had rolled over a close-up of Lara's exquisite face, he dialed her private number.

“Darling girl? Beni and I have been having a little talk
â¦
”

H
eaven hadn't changed much, Chen thoughtâat least, not on the surface. As he stepped out of the little skiff sent to him by the Celestial Emperor, all the way across the Sea of Night, onto those by-now-familiar shores, redolent of peach blossom and lined with flowering apricots, he could have been stepping back in time, to when he had come here with a demon by his side. He found himself missing Zhu Irzh, this trip. The demon had been seconded onto a case involving a drug-smuggling ring, one that not-coincidentally concerned Zhu Irzh's fiancÃ©e Jhai Tserai. The industrialist was on the right side of the law, for a change, although Chen knew how difficult it was actually to pin anything on Jhai. She had a tendency to prove elusive when it came to the finer points of legality, and given that Singapore Three's laws were themselves somewhat mutable, depending on who was breaking or enforcing them, Chen's sympathies did not always lie to Jhai's disadvantage.

Still, there was a definite sense of something missing, whether it was the moral (or immoral) support provided by Zhu Irzh, or simply the fact that the presence of the demon provided a leavening influence upon the endless propriety and pastel glamours of the Heavenly Realm. The late Emperorânow disembodiedâmight have gone not-so-quietly mad, but the assumption of his son did not seem to have changed things a whole lot. Sighing, Chen walked toward the carriage, pulled by two golden-skinned lion-dogs, that was to take him to the Celestial Palace.

“It's not been easy,” the Celestial Emperor murmured, an hour or so later.

“I can imagine.” Chen was genuinely sympathetic. “When one considers that China itself has been constrained by thousands of years of tradition, and we are in the far more changeable human realm
â¦
You've got quite a task on your hands, if you're really considering reform.”

“I don't have a choice,” Mhara said. He turned to Chen. The Emperor had changed little since Chen had first met him: the same fall of dark hair, the same tranquil blue gaze. A tall, young man, now dressed not in the massively ornate robes of the Celestial Emperor, but in a linen tunic and loose trousers. He looked comfortable, cool, and above all, un-stuffy. He did not look as though he belonged in this vast chamber, seemingly floating above the cloud-layer of the Palace, its walls decorated with tapesÂ­tries depicting events so long ago that China had not yet been born as a nation. This was a personage who, Chen reminded himself, chose to travel by bicycle when on Earth.

“There's always a choice,” Chen said. “You could be everything your father was.”

“Exactly. How about âmad'? The invasion of Hellâa stupid plan, misconceived in arrogance and entitlement.”

“Kuan Yin had told me that Heaven was planning a strategic withdrawal,” Chen said. “Take over Hell and use it and Earth as a kind of depository for souls.”

“Yes. Heavenâliterallyâforbid that any more human souls should come here, cluttering up the place, contaminating it with their still-mortal essence. Father lost sight of what Heaven was
for.”

“I suppose the question that comes most naturally to my mind,” Chen remarked, “is how much support your father enjoyed. Quite a lot, one would think.”

Mhara nodded, turning back to the window to stare out over the mild airs of the Celestial city. “A lot, yes, but it's hard to know how much of that was coerced. I don't mean by force. Heaven's host was completely conditioned to believe in the rightness of the Emperor's judgment. I only got away from it because I was living on Earth, and besides, those of us in the Imperial family have more freedom of will. That in itself isn't very encouraging.”

Chen shrugged. “It's a caste system.”

“Quite so. The ultimate caste system, in many respects.”

Chen paused. “Emperor.
Mhara
. It is always a pleasure to see you, and an honor to enter Heaven. But why
did
you ask me here today?”

Mhara turned and smiled at him. It was only at moments such as these that Chen was fully aware of Mhara's divine origins: Mhara played down the whole god-thing to such an extent that most of the time, it was possible to see him as nothing more than a mild-mannered young monk, one who wore the faint and modest glow of enlightenment, perhaps, but a human nonetheless. But now, if only for a second, Chen found himself dazzled, standing in the radiance of his friend's gaze.

“Chen. What is your job title?”

“I know, of course. But what is it that you actually
do?”

“I investigate crimes. Hopefully, I solve them.”
I save the world on an increasing number of occasions
. But he did not want to say that: it sounded too flippant, and it was hardly part of his job, anyway, unless one took a very wide overview of things. Then it struck him. “I am the liaison officer between the worlds.”

“Between Earth and Hell and Heaven,” Mhara said. “And that's why I asked you to come here today. Because if there's one thing I need, it's a liaison officer.”