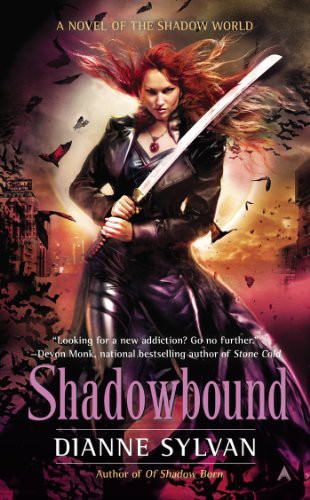 “This series is getting more interesting by the book.”

“Dianne Sylvan is truly a remarkable storyteller. With the ability to bring her characters to life and make their hearts pound with action, readers will salivate for the next installment of the Shadow World series.”

“The third Shadow World urban fantasy is a great, exhilarating entry with several stunning twists, including a fabulous, shocking cliff-hanging climax . . . Fast-paced with backstabbing and betrayal,
Shadow’s Fall
is superb.”

“
Shadow’s Fall
is an exciting, well-executed third installment to Ms. Sylvan’s wonderful Shadow World, and I now wait impatiently for the fourth installment.”

“Exceeded my expectations since the last book! It was awesome and mind-blowing.”

“Sylvan continues to impress with her ability to wring emotions from her readers and give us the right balance of action and romance . . . It’s the true talent of a writer who can have her readers feeling the same things as her characters along with them, and Sylvan’s highly developed characters do just that.”

“I absolutely loved this book! . . . Fans of vampire books everywhere, I have found the next big thing, and it is the Shadow World series by Dianne Sylvan. The twists and turns that Sylvan placed in this book kept me flying through the pages . . . Queen Miranda is one of the strongest female characters I have come across, and hands down this series is going to be sensational! I cannot rave enough over this one . . .
Shadowflame
gave me all the high-impact action, romance, and gore that I want in a book.”

“Dianne Sylvan’s writing is captivating. She creates a world that will suck you in from the get-go. Her writing style is fluid and unrelenting.
Shadowflame
follows the same near-flawless writing style that book one did . . . I enjoyed the suspense and Dianne Sylvan’s creative way of keeping readers on their toes.”

“Miranda was the sort of heroine I enjoy reading about; she didn’t just suddenly fall for David, she made him work at gaining her trust . . . The overall book was refreshing.”

“If you thought
Queen of Shadows
was fantastic, you are going to be blown away by
Shadowflame
. . . Dianne really knows how to rip your heart out and get you feeling everything the characters are feeling as you read.”

“Dianne Sylvan has truly created a vampire world that I would want to be a part of for years to come . . . A phenomenal book from beginning to end.”

“Dianne Sylvan is the queen of emotional storytelling. She takes the story exactly where she thinks it needs to go, even if it’s not pretty . . . I loved it.”

“Sylvan’s powerful debut is packed with startling action, sensual romance, and delightfully nerdy vampires . . . [Her] compelling take on vampirism, her endearing characters, and a complex, unabashedly feminist plot will have readers hungry for a sequel.”

“
Queen of Shadows
pulled me in . . . Dianne Sylvan’s rich, dark, sexy reimagined Austin is filled with people I want to visit again and again . . . Sylvan’s got voice, doesn’t miss a beat, and rocks it all the way to the last note . . . Looking for a new addiction? Go no further.”

“Dianne Sylvan has created an original take on vampires that I thoroughly enjoyed, and I’ll be looking for her next book with great anticipation. She’s a skilled and talented storyteller who definitively knows how to deliver one hell of a book!”

“Dianne Sylvan is an incredibly talented writer. She draws the reader not only into the story but into the very marrow of someone who is starting to question their grip on reality . . .
Queen of Shadows
concludes with a great flourish, leaving the reader euphoric.”

“Well written . . . The relationship between the empath and the vampire makes for a strong Shadow World thriller that will enthrall the audience with a sense of awe, as supernatural Austin comes across [as] realistic through the filters of the flawed lead protagonists.”

Ace Books are published by The Berkley Publishing Group.

ACE and the “A” design are trademarks of Penguin Group (USA) LLC.

PART ONE: The Eight of Pentacles

PART TWO: The Ten of Swords

To my mother: for golden summers, Jell-O fingers, and endless slumber parties; and for knowing I was your daughter the first day we met

There was nothing to do but run.

Avi did not run. His sword flashed in the night, and he and Elite 7, the only other survivor of the Prime’s personal guard, fought back-to-back, keeping the enemy busy while the others escaped the Haven. There seemed to be a thousand of the adversary, their blood spattering the pristine walls and centuries’ worth of treasure passed from one Signet to the next. Whoever was behind this would have a lot of stains to wash out of his new carpets.

He wanted to protest—there would be no leaving this hallway for 7 if Avi left him to fight alone—but they both knew the mind of their Prime, and knew that in the absence of a Queen, he valued his wife and her two sisters above all else in the Haven. The Prime would want them delivered to the safe house, and he would not have trusted anyone to the task but his Second.

Elite 7 smiled at his old friend. They had greeted each other the same way for eight years . . . and said farewell the same way, too.
“Wa-laikum as-salâm.”

He returned the smile. Only then did he run.

The world was on fire—smoke was thick in the air, leaving his lungs burning as he crossed the compound amid flying crossbow bolts and flaming arrows. Servants, Elite, anyone caught by surprise would be cut down mercilessly . . . and they had
all
been caught by surprise. No one, not even the intelligence operatives he had trained himself, had any idea this was coming. Their Prime had ruled for four decades without a single challenger—more than any other leader could say in this part of the world.

The women’s apartment was on the far western side of the main building. He angled away from the Haven’s main concourse and took a side corridor the enemy wouldn’t know about unless they had memorized every meter of the property’s layout.

Before he could reach the door, a sword swung toward his throat; he spun around, meeting it with his own blade, hitting hard enough to knock the weapon out of his opponent’s hand. Another quick stroke took the invader’s head.

He looked up and saw three more coming toward him. “I do not have time for this,” he said.