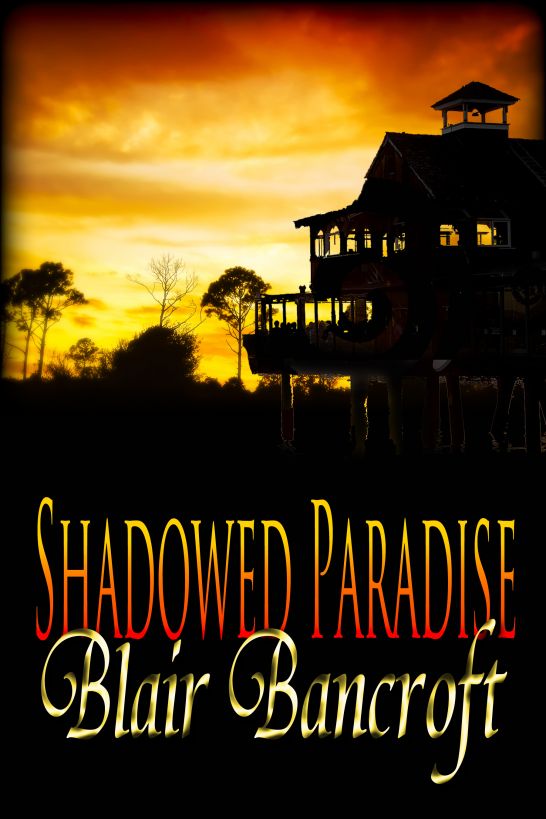 For other books by Blair Bancroft,

A surprising amount of this book is true.
After all, how could anyone make up such a bizarre incident as a
snake climbing a typing stand after a terrified tree frog? It
happened to me while I was writing this book. The bridge washout,
the car trapped in the gap, occurred about a mile and a half from
my house. Spiders the size of saucers, alligator attacks, jungle
rivers the color of strong tea, a “city” with a thousand roads to
nowhere—they all exist on Florida’s gulf coast. A great deal more
of the story, including the serial killings, are based on fact,
but, beyond that, I leave it to the reader to guess where truth
ends and fiction begins.

Somewhere behind the waterfall there was a
road. The Toyota’s wipers, valiantly slashing through the deluge,
allowed Claire intermittent glimpses of gold reflectors crouched on
the center line like an undulating row of one-eyed alley cats
waiting to pounce. To the right was her other lifeline, the white
stripe marking the edge of the pavement and the deep drainage ditch
just beyond.

In the three miles since she turned off U.S.
41 Claire had seen only one other car. Obviously the natives had
sense enough to stay home in a monsoon. Or perhaps no one was out
there at all. No reassuring glimmers of light shone from the houses
whose dark deserted shapes loomed behind the curtain of water,
their snowbird owners flown safely north well in advance of the
scalding heat and daily downpours of summer along Florida’s Gulf
Coast.

A blue-white flash of lightning illuminated
the scene in stark relief, revealing the looming shadows as nothing
more sinister than modest ranch-style homes with neat lawns,
swaying palms, massive live oaks. Thunder crashed down, enveloping
the car in a reverberating roar of protest from the seared black
clouds around them.

“
It’s all right, Jamie,” she said
brightly, eons more confidently than she felt. “We’re almost home.
They have storms like this all the time in Florida. We just have to
learn to get used to it.” If there was one thing her son didn’t
need, it was more fear.

Claire gripped the wheel so tightly her
knuckles ached. She allowed herself one tiny glance away from the
road. Jamie’s frail shoulders were rigid, his eyes glued to the
steady swish of the wipers struggling to part the waterfall on the
windshield. His small hands clutched the shoulder strap in front of
him.

Claire winced. Eight-year-olds should
not have to suffer from white knuckles.
What were they doing out here?

Simple. She had succumbed to the sight of
Jamie’s chin sagging toward his small chest as he heard the TV
weatherman announce the possibility of record rainfall. It had been
raining for three days—not the area’s usual late afternoon
thunderstorms, but solid, hour-after-hour driving rain. Claire went
off to work each morning, leaving Jamie and his great-grandmother
to endure the tedium of no sun, no beach, no walks along the
Intracoastal Waterway. Smitten to the heart by her son’s silent
endurance, Claire had proposed an excursion to the latest Harry
Potter epic. And was amply rewarded by a wide-eyed, “You mean it,
mom?” followed by a whoop of joy and a beatific smile.

Such a simple outing. Now, too late, Claire
recognized her Florida newbie mistake. While she and Jamie sat
enthralled by Harry’s adventures at Hogwarts School of Witchcraft
and Wizardry, the storm had increased from downpour to torrent. And
now they were fighting their way home through a nearly impenetrable
wall of water.

Jagged lances of lightning stabbed the
swirling clouds, exploding into great sheets of light. Thunder
enveloped them. Claire heard Jamie draw a deep breath, that
heart-rending gasping sound that said he was going to be brave, no
matter what. Her visibility worsened in a sudden misting of her
eyes. Guilt swept over her. Not even Harry Potter was worth the
resurrection of Jamie’s terror.

Lightning continued to flicker like an
erratic neon sign, illuminating the drenched world around them with
eerie intensity, shimmering off the waving palms, the Brazilian
peppers, the swaying Spanish moss dangling from gigantic oaks. Off
the tangle of mangroves.

Claire slowed from a determined twenty miles
an hour to less than fifteen. Although she was a new resident, she
had visited the area all of her life. Mangroves grew in salt water
or the brackish places where rivers met the sea. Their octopus-like
roots anchored the soil and provided a habitat for a wide variety
of wildlife. Mangroves meant they were entering the causeway
leading to the bridge over Heron Creek.

The narrow two-lane causeway, about the
length of a football field, crossed the estuary where Heron Creek
emptied into the bay. Usually, the creek was a placid band of water
meandering through mud flats and mangroves. Tonight, each flash of
lightning revealed roiling waters on both sides of the road. White
caps swirled, splashing against the embankment. Suddenly, directly
in front of them, the golden cat’s eyes winked out, drowned under a
blanket of water. The white line disappeared.

Water over the bridge.

Fearful of braking on wet pavement, Claire
took her foot off the gas. The lightning, capricious as always,
moved out into the Gulf, leaving nothing to illumine the bridge but
the Toyota’s headlights.

“
Mom?” Jamie, clinging to being
brave.

They were less than a mile from home. The
only other bridge across Heron Creek meant a six mile detour. She
drove this bridge daily. Knew it had survived hurricanes, as well
as countless Florida rainy seasons. Water, only a few inches deep,
covered less than twenty feet of road. Home was straight ahead. She
could do this, she knew she could. Claire put her foot back on the
gas and moved forward at a steady ten miles an hour.

She was almost on it before she saw it.
Not a steady stream flowing over the bridge but rushing, roiling,
white-capped water. Bubbling up. Not just over, but
up
. Through an ominous streak of
black that ran the width of the road.

Oh, God!
Claire
pumped the brakes, shouting for Jamie to hang on, knowing it was
too late. The car slid inexorably forward. They were going in.
Claire slammed into the steering wheel. The front end tilted down,
sagged into the black abyss. Came to an abrupt, teeth-jarring
halt.

The crack was not wide enough to swallow them
up.

A ragged gasping noise. Claire had not
realized she was holding her breath until her agonized lungs forced
her back to life. “Jamie! Are you all right?”

“
I . . . think so.” Jamie sat stock
still, instinctively aware of what the slightest movement might
do.

The Toyota’s front end was angled down by
thirty degrees, rocking ever so gently in the swift current which
had eaten away the pavement at the center of the bridge. In the
storm and darkness it was impossible to tell how fast the gap was
widening. Only one thing was certain. There was no backing up. The
front wheels were in a void, and any movement could peel back the
pavement, sending them plunging into the raging river.

The car shuddered as something, possibly a
large branch, bounced off the upstream tire and was swept on into
the bay.

“
Mo-om!” It was Jamie’s nightmare
voice. The one Claire had hoped never to hear again. A tiny choking
sound. A hiccup.

“
Listen to me, Jamie.” Claire couldn’t
believe the steady, mommy’s-got-everything-under-control tone that
rolled off her tongue. “Sit very still while I shut off the engine
and put us into Park.”

Claire unglued her right hand from the wheel,
eased the gear into place. She was grateful it was too dark for
Jamie to see the terrified grimace on her face as she pulled the
hand brake upward. Except for the rocking of the current, the car
did not move. With what she hoped was an inaudible sigh of relief
Claire switched off the ignition. She left the headlights on,
giving dim but definite comfort. And a warning to anyone
approaching the bridge from the other side.

“
Good boy, Jamie.” Mom’s bracing
commendation for her son’s bravery. The need to hear the sound of a
voice. Any sound but the incessant beat of the rain and the ominous
roar of the flood below.

“
Jamie, I want you to unhook your seat
belt. That’s right. Good boy. Now, very slowly, open the door. Step
down carefully.” Oh, God, what if there was a hole there too?
“Jamie! Hang on to the car until you’re sure the road is solid.
Okay?”

“
Okay.” Thin but brave. Jamie Langdon
was experienced at being brave.

Unfortunately, Jamie took her words so
literally, moving with such extreme caution Claire had to clench
her jaw to keep from shouting at him to get a move on. Who could
tell how fast the pavement beneath them was crumbling?

“
Mom, I think it’s locked.” Patient.
Faintly superior. Even at a time like this, his father to the
life.

Automatic door locks.
Idiot!
She should have remembered. In
the dark all the buttons felt the same. Claire pushed each one
until rewarded by a satisfying plop as all four doors unlocked.
Sinking her teeth into her lower lip, Claire took a deep breath.
They would survive this. They really would. “Okay, Jamie, try it
now.”

As his small hand pulled at the handle, the
world burst into a blaze of light. A blinding white light that
turned night into day. Claire and Jamie gasped. The Toyota bucked
in a sudden rush of current, then settled into a gentle rocking
motion as the unrelenting light sparkled off the waters that had
swallowed its front tires.

A rush of raindrops, cool damp wind. Movement
behind her. The car seemed to sigh, settling back on its haunches
as something large and heavy slid into the rear seat. A voice spoke
in a deep, rich baritone. “Everybody okay?”

“
Just scared,” Claire managed, relief
flooding through her. They weren’t alone. And the voice had all the
reassurance of a true hero.

“
Okay, Jamie,” said the stranger
without the least hint of urgency, “I don’t think this car’s going
anywhere, but just in case, we’re going to take it real easy. It
looks like I outweigh both of you together, wringing wet, so you
could probably go out the front door, but to play it safe, you just
crawl on back here with me and I’ll scoot you out the rear door.
Okay?”

“
Okay.” Jamie, small and agile, made
short work of wiggling his way through the gap between the front
seats.

“
Go straight to my pickup,” the firm
baritone instructed, “and climb in. Your mother doesn’t want to
have to worry about you while she’s getting out of here.
Right?”

“
Right.” There was another rush of damp
air, rain and rumbling river. No cry for help, no sound of a young
body plunging into an abyss. Claire bit back a sob of
relief.