Read She Drives Me Crazy Online

She Drives Me Crazy 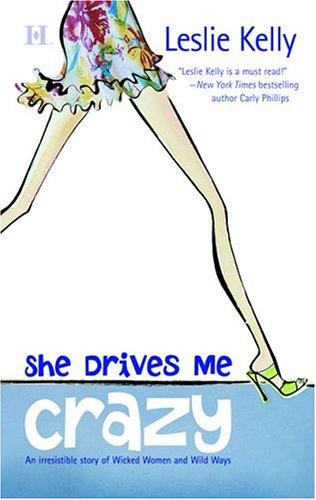 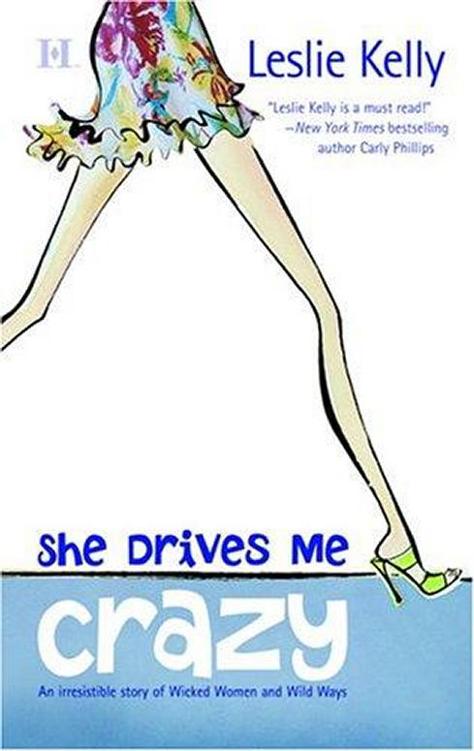 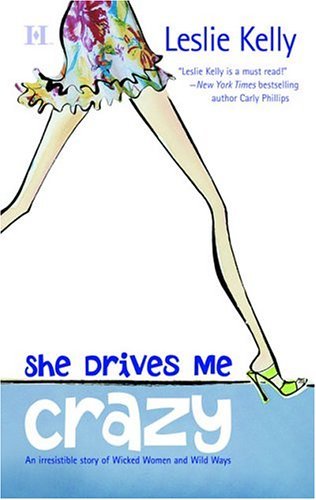 "Leslie Kelly is a must read!"

"Leslie Kelly writes with a matchless combination of sexiness and sassiness that makes every story a keeper."

—
Romance Junkies
"Leslie Kelly is a master of amusing contemporary romance!"
—
Word Weaving
"You can always count on Leslie Kelly to keep readers laughing and entertained with dazzling characters and passionate romance."
—
The Romance Reader's Connection
"Leslie Kelly has the magnificent ability to create marvelous storylines with truly memorable characters."
—
Writers Unlimited
"Leslie Kelly writes hot, steamy stories with lots of humor and tons of romance thrown in."
—
Romance and Friends
And turn the page for even more raves!
On
Killing Time
…

"Delightful and entertaining from the first page to the last. I highly recommend Leslie Kelly's
Killing Time
."

"A fun, sexy and unique story."

"Kelly tells a high-energy story and delivers a satisfying read."

"Intrigue, passion, excitement and more are a given with
Killing Time
."

—In the Library Reviews

"Leslie Kelly's latest…is a deliciously madcap adventure filled with the sexy and the zany!"

"When you pick up
Killing Time
, and I strongly recommend that you do, make sure you have plenty of time to read because you will not want to put it down!"

—Fallen Angel Reviews
ISBN 0-373-77031-6
SHE DRIVES ME CRAZY
Copyright © 2005 by Leslie A. Kelly
All characters in this book have no existence outside the imagination of the author and have no relation whatsoever to anyone bearing the same name or names. They are not even distantly inspired by any individual known or unknown to the author, and all incidents are pure invention.
This edition published by arrangement with Harlequin Books S.A.
® and TM are trademarks of the publisher. Trademarks indicated with ® are registered in the United States Patent and Trademark Office, the Canadian Trade Marks Office and in other countries.
www.HQNBooks.com
With sincere thanks to my agent, Ethan Ellenberg.
Ethan, without your encouragement and support, this would never have been possible.
And to Bruce. You make it all worthwhile. Thanks for making me truly believe in what I write.
PROLOGUE
Top
Next

"Johnny, you gotta see this. There's a giant set of hooties hangin' over exit 23."

County prosecutor Johnny Walker, named for his father's favorite brand of fire in a bottle, barely looked up as he continued to pump gas into the tank of his SUV. It was too early in the morning to try to decipher Lester's sexobabble.

Coming from anyone else, the pronouncement might have raised Johnny's curiosity. But this was Lester, owner of one of the only two gas stations in Joyful, Georgia. Lester might not remember his nickname from high school, but Johnny—and most of the female population—still mentally referred to him as Lester the Lecher.

"Here you go, Les." Johnny tugged a twenty out of his pocket and extended it toward the other man.

Lester paid no attention. He continued to stare skyward. A tinge of curiosity finally made Johnny turn around. Following Lester's stare, he beheld what had so captivated the man.

The letch was right. A big giant set of hooties…er, woman's breasts… was clearly visible on a billboard by the highway exit. "I'll be damned," Johnny muttered, not believing his eyes. He couldn't help adding, "Nice rack."

Now, wouldn't that give the residents of this nasty town something to gossip about when they woke up this morning? Yessir, the townsfolk of this warm, syrupy burg—as falsely sweet as a sugarcoated lemon drop—would glance out the window while munching their corn flakes and behold a pair of snow-capped mountains standing over the interstate. Because from here, the white tassels barely covering the five-foot-in-diameter nipples did indeed resemble snow.

Lester continued to pay silent, drooling homage to the fleshy hills glistening in the morning sun. Finally, he whispered, "'Whaddaya suppose it's for?"

Johnny shrugged. "Haven't you heard? Sex sells. It could be advertising anything from toothpaste to Viagra."

"Nah, it wouldn't work," Les said with a snicker. "One look at that and a man'd realize he don't
need
Viagra."

Personally, Johnny hadn't needed to be titillated by pinups, magazine centerfolds or Victoria's Secret catalogues in oh, about forever. Nope, it had been the real thing or nothing since he was fourteen and a girl named Cherry Hilliard had lived up to every one of those "on top of Cherry Hill" jokes he'd heard whispered about her in the locker room.

Darn shame Cherry had found religion and married Reverend Smith. Cherry Smith just didn't have quite the same ring to it.

"One way to find out." Lester reached for the passenger side door handle of Johnny's SUV. "Let's go check 'er out."

"I can't. I've got to drive down to Bradenton for a meeting. Besides, you have another customer," Johnny said as he watched Fred Willis, a local deputy who Johnny had gone to high school with, turn his squad car into the station.

Fred had apparently noticed the breasts, too. He was paying no attention to his driving, and almost clipped Johnny's back fender as he pulled up a few inches from the pump. His ancient, dingy tan squad car gave a rusty belch as it shook, rattled and rolled to a stop. "You see that?" he yelled from the window.

"You bet…let's go!" Lester dashed around to Fred's passenger door and hopped in. The two drove off, not sparing Johnny a second glance.

That wasn't too surprising, since Johnny couldn't fairly call himself one of Fred Willis's favorite people. Particularly because Johnny got such satisfaction in setting free the poor bumbling criminals Fred and his boss, Sheriff Brady, managed to round up in this relatively crime-free area.

Give him a real crime or criminal, and he might give a damn about doing his job. But, hell, here in Joyful? The jail cell doors might just as well stand open for all the effort Johnny took to keep their occasional occupants inside them. Course, that was probably more effort than Sheriff Brady made to ensure the innocent folks who had the misfortune of being from the wrong side of town were kept
out
.

In Joyful, the justice system was equally balanced. If you were rich and arrogant and committed a crime, the police took care of you. If you were poor and trashy… Johnny Walker did.

Still holding the twenty, Johnny walked into Lester's grimy office and left it on the counter near the register. He gingerly picked up a half-squashed plastic water bottle and set it on top of the bill, so it wouldn't blow away in the warm summer breeze already wafting through the open door.

Looking around, he grimaced in distaste. Hopefully no one else would come to the station and enter the office looking for Lester. The magazine photos plastered across the back of the door would probably make Virginia Davenport, president of the Daughters of the Confederacy, drop dead of sheer outrage.

And with his luck, the sheriff would call it murder and want Johnny to prosecute.

"Hooties over Joyful," he mused aloud as he again glanced at the billboard and got into his car. "Now there's something you don't see every day."

As he drove out of town, Johnny was struck by the strong feeling that something interesting was about to happen.

He couldn't wait to find out what it was.

CHAPTER ONE
Previous
Top
Next

Cora Dillon wondered if the years of sleeping beside her husband Bob, who sawed logs louder than any lumberjack, had finally taken their toll. Her hearing, without doubt, had just failed her. She stared at fancy-pants Jimbo Boyd, whose round face was filled with self-importance. She didn't know why, considering what a rotter he'd been as a boy. And leopards didn't change their spots. Not in Joyful, Georgia, anyway.

Jimbo nodded, then reached into his desk. He pulled out a bunch of keys stuck on a ring shaped like the hood ornament on the namby-pamby car he was so proud of. "I need you to get the house aired and cleaned today. And I want it done right."

Cora straightened and narrowed her eyes. Imagine, snot-nosed, dirty-pants Jimbo Boyd telling her how to clean a house! Hadn't she worked as a cleaning woman for him and half the town for the past ten years? Something was definitely wrong with him. Maybe the glue he used on his shoeshine-black toupee, which looked about as real as the one worn by that Captain Kirk on the TV, had seeped through his skin and affected his brain.

"Emmajean Frasier's corning back to Joyful. Now there's a trick I'd like to see," Cora replied with stoic calm, "considering she's been dead more'n a year."

Jimbo shook his head and huffed. "Yes. Her mama's folks have money and raised the girl overseas. She spent a year here, though, her last year of high school. 'Bout ten years ago."

Cora thought on it. "Possible, if it was
exactly
ten years ago. That's the year my youngest girl lost her husband and me'n Bob went out to be with her. Always told her the rotten sum-a-gun she married was a brainless fool."

Jimbo pasted a look of false sympathy on his face, managing to look more concerned than annoyed, though Cora knew better. "I hadn't realized your girl had been widowed."

Cora snorted. "Widowed? He didn't
die
. I just toldja he got
lost
. Got drunk in the woods and wandered around for days rantin' about giant beavers. Ended up in the nuthouse in Terre Haute. We stayed a while to take care of Cora Jr. and the kids."

Jimbo made a rude sound and Cora's fingers itched to give his ears a good boxing. She didn't, though. Jimbo Boyd
did
own the only real estate office in Joyful, and sent a lot of work her way. Not to mention he was the blasted mayor.

"She'll be here late today, so I need this done now."

She scowled. "I didn't see a granddaughter at the funeral."

"She wasn't there. She was sick or busy or something."

That made Cora pause. Too busy to come to her grandma's funeral? Disgraceful. She harrumphed as she took the keys from Jimbo. Then she paused, remembering a wicked old scandal. "Wait, the Frasier girl…is she the one.

Jimbo nodded, his own eyes glowing with speculation.

Cora smirked, no longer surprised Emmajean's grandchild hadn't had the nerve to show up in Joyful again. Not given the way she'd
left
it. "I suppose I can have the house cleaned to Miss High-and-Mighty's satisfaction."

Tuvalu by Andrew O'Connor
The Apartment by Debbie Macomber
Mostly Dead (Barely Alive #3) by Bonnie R. Paulson
The Hunger Games by Suzanne Collins
Alive in Alaska by T. A. Martin
Las señoritas de escasos medios by Muriel Spark
A Soldier's Story by Blair, Iona
The Passage by Irina Shapiro
The Convenient Bride by Winchester, Catherine
Song of the River by Sue Harrison