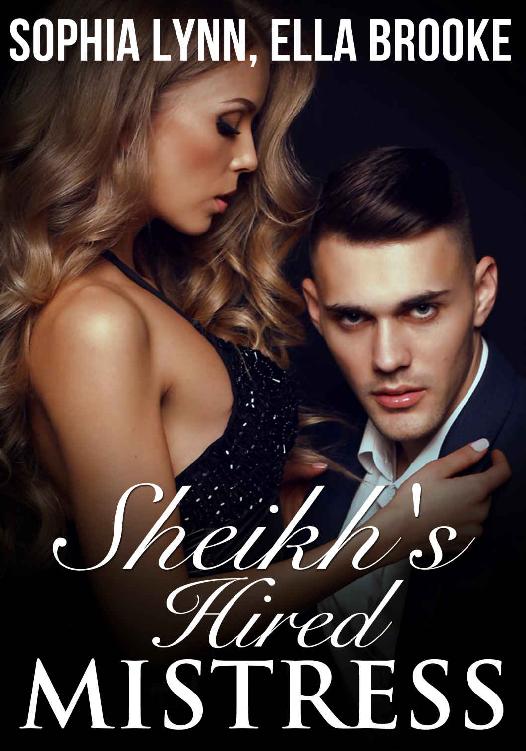 to subscribe to our newsletter & get EXCLUSIVE updates on all offers, secret previews, and new releases!

ANOTHER STORY YOU MAY ENJOY
Sheikh's Possession

Laine’s eyes narrowed into thin slits and fixed on the temp.

His eyes went wide as plates. The clock ticked. A tumbleweed may have passed by.

He set his notepad down on Laine’s desk and picked up the phone. “Brandt Interiors,” he half-sang, “This is Jacob speaking. How may I direct your call?”

Laine smiled victoriously and looked back to her computer screen. She had a lot of work to complete on this account before going home for the night. Convincing the Madisons that they needed to redo their den as well as
all
of their bathrooms—and that she was the only decorator in the state (and especially the only one at Brandt Interiors) they should even
consider
—had put her schedule back a few days, but it would be worth it. The commission on this account was going to be astronomical. Mr. Brandt had a tendency of overlooking her work or handing her assignments over to more senior (and more male) employees, but once he saw what she’d done here, turning a bathroom remodel into a whole home project, he would have to notice her. A raise and preferential leads
couldn’t
be far behind.

Jacob tried to hand her the phone, but she cut him off with a wagging finger.

She met his eye, sucked in her cheeks, and then went back to work.

“She’ll have to get back to you,” Jacob said. He rolled his eyes after taking a message and then reclaimed his notepad before returning to his business.

If Laine had a second to breathe, she might have felt guilty for blowing off her baby sister Emma. But Emma’s already-bustling acting career had taken off in the past year, and she rarely made time for Laine and their father. No doubt Emma was between takes or photoshoots or fabulous lunches with beautiful people. She could wait a few hours for Laine to take a break.

Laine had been hired at Brandt Interiors directly after her graduation from Parsons four years ago. Ever since, her life had been patterns, swatches, and haggling with suppliers. It was just how she liked it, aside from having to scavenge for recognition among less-talented associates. It didn’t leave much time for those rare creatures known as weekends and vacations, though. Laine only took time off to go visit her father, who lived alone upstate. Laine called him almost every day. He was about as good at making social ties as Laine was. Emma had tried to play matchmaker for him throughout her high school years, but it had come to nothing. Greg McConnell had always been a one-woman man.

“Hiii-eee!” Emma sang from the doorway, rapping her knuckles up and down the frame.

Laine very nearly spit out her coffee. “Em? What are you doing here? Shouldn’t you be on a set somewhere in Hollywood?”

“If you’d answer my calls, you’d know that we’re doing some filming here in NYC!” Emma bounded behind Laine’s swivel chair and mussed her carefully arranged hair. “Take a break! How often do you get to see your baby sister?”

“Maybe more often, if you’d come home for holidays,” Laine drawled, swiveling back to her computer. “I’m glad you’re in town. I just got a pretty decent couch—”

Laine sucked in her cheeks.

Emma leaned on the back of Laine’s chair. “Come out with me tonight! The whole cast is going to this totally swank party. It’s gonna be insane!”

“What part of ‘insane party’ says Laine McConnell to you?” Laine finished up an e-mail to a distributer. “I’m strictly business casual. If you have a function where I can wine and dine some prospective clients, give me a call.”

Emma shook Laine’s shoulders and leaned on the edge of her desk.

“Be careful of those papers!”

“You’ve gotta start living your life, Lainey.” Emma threw her hands out emphatically. “There’s so much more out there than work.”

“I like work,” Laine argued. “You don’t move up if you don’t put in the hours.
You
like your work.”

“I’m an actress. I get to play pretend for money.” Emma hopped onto the desk and swung her legs. “Seriously. Come with me. I’ll introduce you to my hot costars.”

“Mmm. Empty-headed man candy. What more could I ask for?”

Emma swung down to block Laine’s screen. “Give the empty-headed men a chance! Or at least, dance with them and enjoy some top notch hors d’oeuvres and champagne.”

Laine sat back in her chair and watched her lovely sister flashing the smile that had been earning her the big bucks since her first national ad selling chewing gum. Emma could be infuriating. Every move had an infusion of well-practiced grace. Laine could still see Emma prancing around as a little girl in their mom’s heels. Laine, on the other hand, had neither been born with grace nor felt compelled to practice it. Her style was a very distinct business-chic, with sensible but stylish heels, which she rarely deviated from in public. She only could imagine herself dolled up Emma-style among all the glitterati at this party. She would feel like a stork parading around in a slutty dress.

It was, however, tremendously hard to tell her baby sister no.

“What do I have to do to convince you to let me finish my work?” she asked.

“Promise to let me dress you up and drag you to this party. At least for, like, two hours.”

“One hour. You get me in your world for
one
hour, and then you have to come home with me and eat Thai food and binge watch something while I design a new wallpaper pattern on my laptop.”

“Your life is a corpse, Lainey.” Emma laughed. She squeezed Laine’s shoulder. “I’ll text you my room number.”

“Can’t wait.” Laine focused back on her screen.

She was going to have to get these orders out in the next hour. She pushed a hand through her hair. Emma would want to do something ridiculous with that, too. Laine would have to keep her from dousing it with glitter or dying it. It was a dark-chestnut, like their mother’s, apart from the shock of stubborn white hair growing from the front edge of her hairline; it had been there since she was twelve. She let it fall over her forehead, as it always did. It helped to cover the scar.

Laine muttered as she corrected the color codes for the bathroom palettes, “Got your work cut out for you with this party, sis. I’d rather fill out purchasing forms…”

Just as Laine had expected, waiting at Emma’s apartment were a wall of low-cut evening dresses and a personal dresser to paint and coif Laine until she was so annoyed that despite her natural inclinations, she was about to tell her baby sister to bug off. But at the end of it all, there Laine stood, in all her five-feet-nine-inch glory, with four-inch
heels
(she’d lost the battle on those, in spite of her complaint that men didn’t want a woman towering over them), in a flowy blue and purple dress that looked like someone had woven it from a pile of soft scarves. The hem was a
bit
high, and the cut emphasized every curve she could boast of, but Laine had a hard time complaining about the look. She’d certainly never worn anything so
sensual
before.

“They made that one for my costar in
Magnifique.
” Emma touched Laine’s hair carefully, so as not to disturb the artistry that had gone into transforming her daily up-do. They’d left strands around her face along with her lock of white hair, with the full effect softening Laine’s usual in-charge look.

“
Magnifique
?” Laine turned to stare at Emma. “Wasn’t your costar a
drag queen
?”

Emma laughed and took Laine’s arm as they walked up to the high-rise where the party was being held.

“That’s the designer of your dress. People will ask.”

Laine rolled her eyes. It was unlikely any paparazzi were going to be catching any candid photos of
her
. Not with Emma grabbing their attention.

The party was so many floors up that Laine lost count of how many the elevator had whooshed past. It was like they were going up into the heavens themselves. She wondered, briefly, if they were late, since there was no one else on the elevator, but Emma seemed unconcerned. She just pulled out her compact and checked her makeup. Laine took some deep breaths and tried to be patient. If only this were a business situation. She could work it there, in her best Ralph Lauren and a nice scarf—she loved scarves—and a room full of marks. Laine never walked away from an event like that without at least two or three leads.

Emma flashed Laine a grin when the elevator stopped and led the way into the lobby. People stood in scattered groups, holding glasses of champagne aloft and occasionally taking some small morsel from the trays being passed around by white-suited waiters. Laine scanned the crowd and filched a skewer of shrimp wrapped in bacon as the waiter whizzed by.

“Where to, Golden Globe?” she asked.

Emma pulled Laine along into the penthouse apartment, which was more like an airplane hangar than an apartment, really. There were only a few pieces of furniture scattered around; instead flat screen televisions mounted on the walls played music and depicted amorphous figures dancing. No one at the
party
was dancing, but the screens gave the image of movement. It seemed like a waste to Laine. She supposed, though, that people were really here to be
seen
.

While Emma buzzed from person to person, Laine lifted her eyes from the people to the vaulted ceiling structure and the art pieces hung on the walls. She mentally took notes. She assessed the conversations around her for an in to shift the topic toward design, or at least art. She looked down at the wood floors (hardwood, but not of a quality that would endure a lot of heavy wear and tear). A normal person might be scanning the crowd for favorite actresses and actors, but Laine didn’t spend much time thinking about the shows playing in the background of her work in the evenings. After hovering on the edges of conversations for what felt like an eternity, Laine drifted from her sister toward a tall, strange silver sculpture. She couldn’t tell whether it was supposed to be someone flying or something more risqué.

Laine turned suddenly as she sensed someone behind her. Her eyes lit immediately on a thick, luxuriant head of black hair. The man the hair belonged to rose to his full towering height, six-four if he was an inch, and he grinned. A quick, wide, and easy grin that spread across his sun-kissed bronze cheeks and sucked the air from Laine’s lungs and set her skin prickling.

“I, um,
what
?” Laine boggled at the impossibly handsome man standing before her.

Laine looked down and smoothed her hands down her thighs. “Oh, it’s a Ni…Niya—”

“
Nihayat Alhaya.
I own the company. I know the artist who created this one. Though they shortened the hem a bit.” He lifted one brow pointedly.

“Well, I guess I have to thank you for making something nice for us tall girls.”

Murder by Misrule: A Francis Bacon Mystery (The Francis Bacon Mystery Series Book 1) by Anna Castle
Orrie's Story by Thomas Berger
The Mercy Seat by Martyn Waites
Marrying Up by Wendy Holden
The Memory of Midnight by Pamela Hartshorne
Just Between Us by Hayley Oakes
Russian Law (Law Series ) (Volume 1) by Camille Taylor
Arcana by Jessica Leake
In This Town by Beth Andrews
Nowhere To Run by Carolyn Davidson