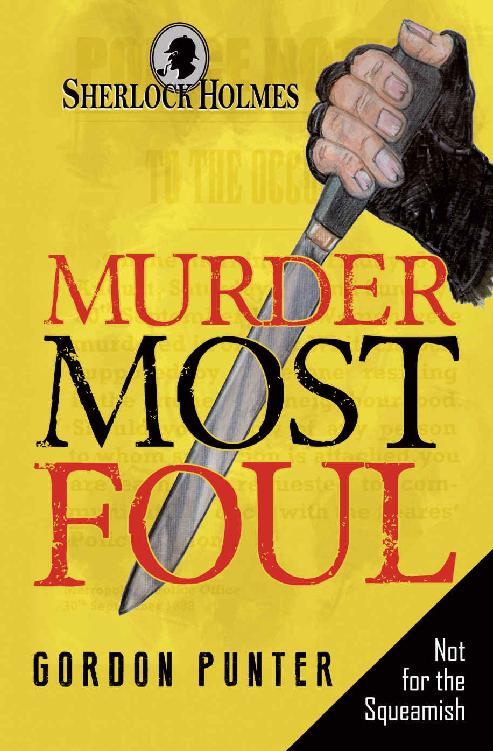 Born in England and raised in west London, Gordon Punter, a self-taught film-maker, has spent the past thirty years, principally in the Middle East, employed as a Media Production Director, writing, producing and directing video commercials, documentaries and corporate programs.

An avid reader of history, in particular, true crime, he took early retirement three years ago to concentrate on writing.
Sherlock Holmes - Murder Most Foul
is his debut novel. Currently researching and writing his third novel, he presently lives in Qatar with his Canadian wife, Cindy, whom he has been married to for twenty-three years.

The right of Gordon Punter to be identified as author of

this work has been asserted in accordance with sections 77 and 78 of the Copyright, Designs and Patents Act 1988.

No reproduction, copy or transmission of this publication

may be made without written permission.

No paragraph of this publication may be reproduced,

copied or transmitted save with the written permission of the publisher,

or in accordance with the provisions

Any person who commits any unauthorised act in relation to

this publication may be liable to criminal

prosecution and civil claims for damage.

A CIP catalogue record for this title is

available from the British Library.

Names, characters, places and incidents originate from the writer’s imagination.

Any resemblance to actual persons, living or dead, is purely coincidental.

The Reign of Terror Begins

The Mark of M

Night of the Signs

The lower classes of England, particularly those inhabitants of the East End of London, known as cockneys to the middle-class, distort, mispronounce and use words or phrases incorrectly whilst speaking. They habitually drop letters from words, so a statement such as below:

Harry has a horrible habit of hanging his hat in the hall.

Cockney rhyming slang, which originates from the East End, is a form of speech where two or three words replace a particular common word, but nonetheless rhyme with that word. Such as:

However, in many cases, the two or three replacement words are reduced to one word, as in:

An abundance of non-rhyming slang words and phrases are also used by both the male and female populace, with no holds barred by either gender when it comes to making reference to anatomical organs, or licentious pleasures.

Lead in the pencil = able to achieve an erection

No lead in the pencil = unable to achieve an erection

For the discerning reader, an explanation of the various slang words and phrases, periodically spoken by some of the characters in the following story, are to be found at the back of the book.

Currency of the day.

When you have eliminated the impossible, whatever remains,

however improbable, must be the truth.