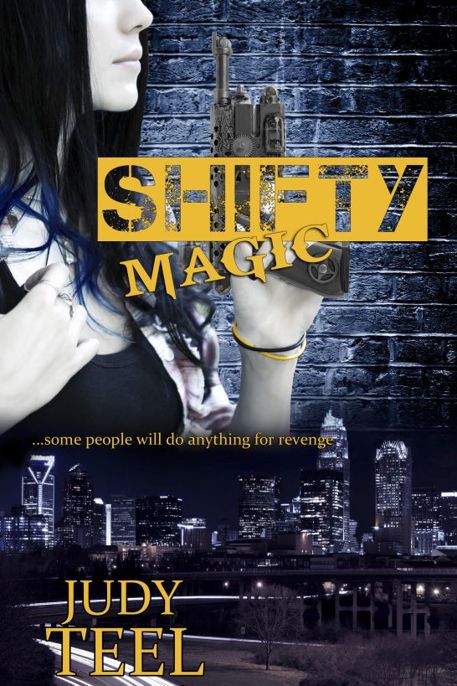 This book is dedicated to my sister-in-law, Joyce. Thank you
for always being there for me through this long, long process
called becoming a novelist. You're the best sister a girl could
ever have.

Thank you to the most
fabulous critique group ever and especially to Joyce, Rebecca and
Jeanette for also acting as beta readers (always a big job). A very
special thanks to my YA beta reader, Zoe, who gave me that
all-important young teen perspective. And last, but certainly not
least, to my editor,
Christie
Stratos
,
who
took the beta version and polished it until it sparkled. I feel
very blessed to have you all in my life and on my team.

All rights reserved. Except for use in any
review, the reproduction or utilization of this work in whole or in
part in any form by any electronic, mechanical or other means, now
known or hereafter invented, including xerography, photocopying and
recording, or in any information storage or retrieval system, is
forbidden without the written permission of the author, Judy P.
Mills.

This book is a work of fiction. Names,
characters, places, and incidents either are products of the
author's imagination or are used fictitiously. Any resemblance to
actual business establishments, inventions, items, locales or
persons, living or dead is entirely coincidental.

This ebook is licensed for your personal
enjoyment only. This ebook may not be re-sold

or given away to other people. If you would
like to share this book with another person, please purchase an
additional copy for each recipient. If you’re reading this book and
did not purchase it, or it was not purchased for your use only,
then please return to Smashwords.com and purchase your own copy.
Thank you for respecting the hard work of this author.

Find Judy Teel on the web!

Cover by
For the
Love of Reading Cover Design

I told myself that I wasn't worried.

The smell of death saturated the hot night
air of the alley around me—rancid food, putrid animals, dead
dreams. In my stomach, concern wrestled with annoyance. I hoped for
Wizard's sake that she wasn't part of that trend.

"Here, bad cat," I whispered, my hand
hovering close to the modified Browning BuckMark strapped to my
thigh. Nothing pissed me off like losing something I loved on a
steamy June night when I should've been kicking back in front of my
air conditioner. Family. Sheesh.

A drop of sweat slid down between my breasts
as I stepped over something slimy and crept toward the end of the
alley. The loading area of the abandoned Walmart behind my
apartment building was a favorite haunt of Wizard's. Plenty of
mice. Plenty of other things too, but she never thought about that.
Why should she? In her mind, she was invincible.

About twenty yards ahead of me, a hungry,
screeching cackle sliced through the murky glow of the sporadic
streetlights. I froze, my senses going on high alert. Nine years
ago, cat owners only worried about other cats or maybe a stray dog
getting their pets. The paranormal terrorist attacks had changed
that. Turns out there's a lot more out there than humans ever
thought.

As I approached the loading area, I
flattened my back against the brick wall and inched toward the
corner. The habit came as naturally to me as sleeping with my gun,
and I'd never regretted doing either. Even though I was new to the
private investigation and bounty hunter business, I had plenty of
reasons to live cautiously. Life is like that when you have a knack
for making enemies.

Another burst of grating jabber echoed off
the back of the old Walmart and into the alley. Wizard shot past
me, her fluffy tail straight out as she tore down the alley and
back the way I'd come. I jumped, my heart pounding in my ears.

Grinding my teeth, I pushed down the
temptation to yell at her and sucked in several gulps of air to
calm my nerves. My streetwise cat's terror was a bad sign for
somebody. I hoped it wasn't me.

Crouching down, I slid my
gun out of its holster. With my thumb, I pressed the hidden button
on the left above the grip. The pistol gave a soft
snick
as the vial and
hollow glucose-based dissolving needles rotated into the arming
chamber.

I inched forward, far enough to see past the
end of the alley and into the loading area. Only one stubborn
streetlight on the other side of the broken security fence cast its
inadequate glow across the cracked asphalt. Shadows pushed around
the edges of the open space, deepening where they cluttered up
against rusty dumpsters and smashed crates.

My heart thudded against my ribs at the
sight of the woman standing just inside the slash of light,
huddling in on herself, shaking. She was average height and on the
plump side, around twenty like me, with light brown hair. Unlike
me, her boobs looked ready to spill out of the low-cut halter top
she wore, and her tight micro skirt was so close to showing her
goods that if she twitched, I'd be scarred for life.

People were incredibly stupid about
vampires. They had no idea what they were dealing with.

From the cover of the alley, I went down on
one knee, my Browning gripped in both hands. I aimed at the biggest
abomination, a once-human thing of about two hundred and fifty
pounds, tall, broad and muscular. A prickle of intense focus skated
over my skin, and I slowly squeezed the trigger.

The pistol gave a
crack
and kicked back;
the vamp dropped like a stone. His companions froze, utterly still
as only paranormals can do, and I hit the second one, a tall,
dark-skinned punk with a lean street-fighter's build. That left the
smallest one—light skin covered with tattoos, buzz cut black hair,
and coming right at me.

I shot out of the alley as he sprang for me,
ducking just as he launched. He missed my throat, latching onto my
bare shoulder instead. He sank his fangs into my left deltoid and
hot pain speared out into the muscle. Pulling back as we went down,
I pressed the barrel of my gun into his stomach and fired.

He gurgled and went limp, a dead weight
sprawled halfway across me and attached to my arm by a pair of
fangs. Disgusted, I gripped his jaw and squeezed to pry open his
mouth. I could already feel the first touches of warm, orgasmic
ecstasy pushing at my whole being as the neurotoxin in his saliva
entered my bloodstream.

In minutes it would incapacitate me,
drowning my brain in bliss. Since my own special formula of poison
would only keep the vamps down for about twelve minutes, I had to
work fast or face the consequence of three furious monsters when I
came to. If I even did.

Wiggling his limp head around, I yanked his
fangs out of my shoulder, not caring too much if a few small pieces
of me went with him. The extra bleeding was an advantage, since it
would carry his spit out with it.

Free of his teeth, I shoved the vamp off me
and rolled to a crouch. The girl had sunk to the ground right where
she'd stood, wrapping her arms around herself as she sobbed
quietly. Reaching around my back, I unclipped a Paranormal
Restraining Collar from my belt.

Ignoring the blood running down my arm, I
rolled to my feet and sprinted across the asphalt of the loading
area to the first vamp I'd shot. I put the sole of my work boot
against his thick, beefy shoulder and shoved him onto his back.
Leaning down, I snapped open the PRC and secured it around his
neck. The collar activated on contact, sending out an
electromagnetic pulse that interfered with the extra vampire DNA in
his cells.

The indicator light turned white then
switched to dark red and held steady. His face immediately smoothed
out into his non-feeding normal, showing clean, square-cut features
that could be called handsome if you had a taste for lumberjacks.
When he regained consciousness, the weakening effect of the collar
would keep him feeling like crap as long as it maintained
contact.

A wave of dizziness washed through me as if
I'd just slugged down my fourth martini, and I was tempted to lock
my remaining collar around the tattooed throat of the moron who'd
taken a chunk out of me. Common sense won out. All vamps were
strong and quick, but some more than others. I turned and slapped
my other PRC on the lean, tough-looking fighter who'd dropped to
the ground next to the girl.

"I was so close," she moaned quietly as she
rocked back and forth. "I wanted to see what it was like."

"It sucks," I said, my words slurring a bit
around the edges. Not a good sign. I fumbled with the button on the
Browning and finally managed the two consecutive jabs that opened
the arming chamber above the barrel. Forcing myself to concentrate,
I shook out the vial of vamp poison.

Flicking the hinged metal cap open with my
thumbnail, I shook out a few drops of the oregano oil formula into
the two puncture wounds. A smell like homemade spaghetti sauce
mixed with dirt floated up from my shoulder as the bloody holes
bubbled and hissed and burned like hell. A moment later, my head
started clearing. What knocked out or killed a vamp was an antidote
for humans.

"What are you doing out of the zones?" I
asked, checking the liquid level of the vial before reloading it.
There was just enough left for one discharge. If the biter by the
alley came to, I'd need it. The risk of the cops detecting my
slightly illegal concoction in his blood stream was a better option
than getting my head ripped off. Vampires didn't like the idea of
humans running around with something that could kill them, but I
found it comforting.

"Everyone says getting bit is the best
feeling in the world," she said, her tone forlorn. "And they
offered me a thousand dollars."

I glanced at the unconscious vamp who wasn't
collared. "They would've drained you."

She unwrapped her arms from around herself
and brushed back the mop of curls that had fallen over her face.
"Might have been worth it," she said with a bitter laugh.

"You been walking the streets long?" I
asked. She had to be new to have done something this dangerous.

She shrugged. "Since my ex kicked me
out."

"Blood Kitten," she said, tossing me a
defiant look.

A disbelieving snort came out before I could
stop myself. "May I call you Blood, or do you prefer Ms.
Kitten?"

Her blue eyes narrowed on me. "All you
paranormals are the same, especially you Weres and practitioners.
You think humans can't take care of themselves. I'm plenty
tough."

She obviously had no idea what it took to
survive as a human these days. I did. "Three vamps. One girl.
Stupid choice."

Her bravado faded. She crossed her arms over
her ample chest and rubbed her bare arms with her hands. "The money
would have helped."

"Not if you're dead." A
flicker of movement took my attention away from her, and my finger
tensed on the trigger of my gun. "Great," I muttered as the blur of
the fast moving vamp I hadn't collared disappeared down the
alley.
Now who was making stupid
mistakes?