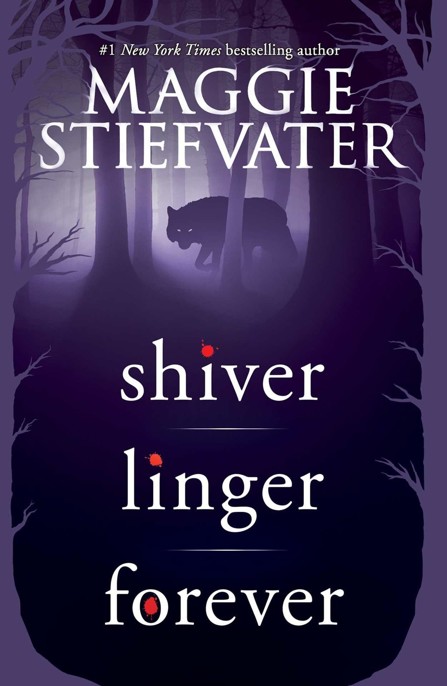 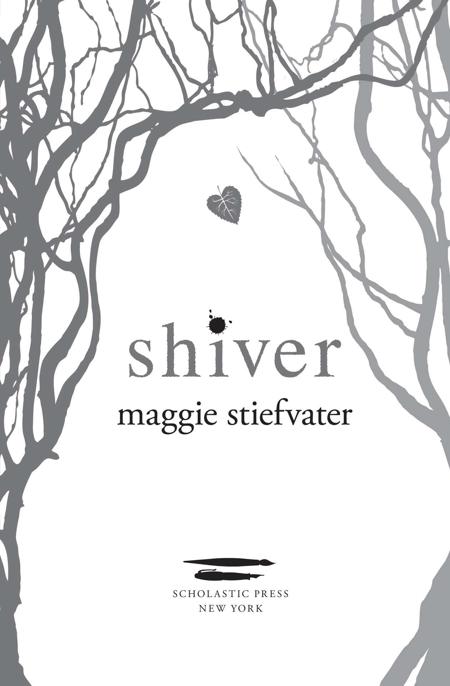 For Kate,
because she cried

A Conversation with Maggie Stiefvater

I remember lying in the snow, a small red spot of warm going cold, surrounded by wolves. They were licking me, biting me, worrying at my body, pressing in. Their huddled bodies blocked what little heat the sun offered. Ice glistened on their ruffs and their breath made opaque shapes that hung in the air around us. The musky smell of their coats made me think of wet dog and burning leaves, pleasant and terrifying. Their tongues melted my skin; their careless teeth ripped at my sleeves and snagged through my hair, pushed against my collarbone, the pulse at my neck.

One wolf prodded his nose into my hand and against my cheek, casting a shadow across my face. His yellow eyes looked into mine while the other wolves jerked me this way and that.

I held on to those eyes for as long as I could. Yellow. And, up close, flecked brilliantly with every shade of gold and hazel. I didn’t want him to look away, and he didn’t. I wanted to reach
out and grab a hold of his ruff, but my hands stayed curled on my chest, my arms frozen to my body.

I couldn’t remember what it felt like to be warm.

Then he was gone, and without him, the other wolves closed in, too close, suffocating. Something seemed to flutter in my chest.

There was no sun; there was no light. I was dying. I couldn’t remember what the sky looked like.

But I didn’t die. I was lost to a sea of cold, and then I was reborn into a world of warmth.

I remember this: his yellow eyes.

They snatched the girl off her tire swing in the backyard and dragged her into the woods; her body made a shallow track in the snow, from her world to mine. I saw it happen. I didn’t stop it.

It had been the longest, coldest winter of my life. Day after day under a pale, worthless sun. And the hunger — hunger that burned and gnawed, an insatiable master. That month nothing moved, the landscape frozen into a colorless diorama devoid of life. One of us had been shot trying to steal trash off someone’s back step, so the rest of the pack stayed in the woods and slowly starved, waiting for warmth and our old bodies. Until they found the girl. Until they attacked.

They crouched around her, snarling and snapping, fighting to tear into the kill first.

I saw it. I saw their flanks shuddering with their eagerness. I saw them tug the girl’s body this way and that, wearing away the snow beneath her. I saw muzzles smeared with red. Still, I didn’t stop it.

I was high up in the pack — Beck and Paul had made sure of that — so I could’ve moved in immediately, but I hung back, trembling with the cold, up to my ankles in snow. The girl smelled warm, alive,
human
above all else. What was wrong with her? If she was alive, why wasn’t she struggling?

I could smell her blood, a warm, bright scent in this dead, cold world. I saw Salem jerk and tremble as he ripped at her clothing. My stomach twisted, painful — it had been so long since I’d eaten. I wanted to push through the wolves to stand next to Salem and pretend that I couldn’t smell her humanness or hear her soft moans. She was so little underneath our wildness, the pack pressing against her, wanting to trade her life for ours.

With a snarl and a flash of teeth, I pushed forward. Salem growled back at me, but I was rangier than him, despite my starvation and youth. Paul rumbled threateningly to back me up.

I was next to her, and she was looking up at the endless sky with distant eyes. Maybe dead. I pushed my nose into her hand; the scent on her palm, all sugar and butter and salt, reminded me of another life.

Then I saw her eyes.

The girl looked right at me, eyes holding mine with such terrible honesty.

I backed up, recoiled, starting to shake again — but this time, it wasn’t anger that racked my frame.

Her eyes on my eyes. Her blood on my face.

I was tearing apart, inside and outside.

The pack fell back from me, wary. They growled at me, no longer one of them, and they snarled over their prey. I thought she was the most beautiful girl I’d ever seen, a tiny, bloody angel in the snow, and they were going to destroy her.

I saw it. I saw her, in a way I’d never seen anything before.

And I stopped it.

I saw him again after that, always in the cold. He stood at the edge of the woods in our backyard, his yellow eyes steady on me as I filled the bird feeder or took out the trash, but he never came close. In between day and night, a time that lasted forever in the long Minnesota winter, I would cling to the frozen tire swing until I felt his gaze. Or, later, when I’d outgrown the swing, I’d step off the back deck and quietly approach him, hand forward, palm up, eyes lowered. No threat. I was trying to speak his language.

But no matter how long I waited, no matter how hard I tried to reach him, he would always melt into the undergrowth before I could cross the distance between us.

I was never afraid of him. He was large enough to tear me from my swing, strong enough to knock me down and drag me into the woods. But the ferocity of his body wasn’t in his eyes. I remembered his gaze, every hue of yellow, and I couldn’t be afraid. I knew he wouldn’t hurt me.

I wanted him to know I wouldn’t hurt him.

I waited. And waited.

And he waited, too, though I didn’t know what he was waiting for. It felt like I was the only one reaching out.

But he was always there. Watching me watching him. Never any closer to me, but never any farther away, either.

And so it was an unbroken pattern for six years: the wolves’ haunting presence in the winter and their even more haunting absence in the summer. I didn’t really think about the timing. I thought they were wolves. Only wolves.

Passion Key (A Romance & Suspense Series) by Amore, Dani
Against All Odds by Irene Hannon
Who Killed the Homecoming Queen? by R.L. Stine, Bill Schmidt
The Frog Princess by E. D. Baker
Blood Will Have Blood by Linda Barnes
The Ten Commandments by Anthea Fraser
Her Wild Bear by West, Heather
Fated for the Alphas: The Complete Collection (Nine Book Paranormal Romance Box Set) by Lily Thorn
Sharpe's Tiger by Bernard Cornwell
The Vampire Who Thirsted for a Wolf by Hyacinth, Scarlet