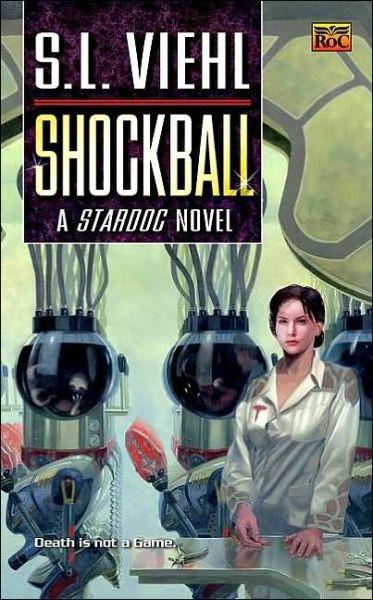 First published by Roc, an imprint of New American Library, a division of Penguin Putnam Inc.

Some people share the changes in your life;
others change the way you live it.
Best friends are the ones who do both.
For the first novelist I ever met,
the gentlest soul I’ve ever known,
and the best friend I’ve ever had,
Marilyn Jordan.

… I will impart a knowledge of the art to my own sons and to those of my teachers, and to disciplines bound by a stipulation and oath…

H
ippocrates never had to coach a green cutter, I thought as I looked at the bloody mess on the table. Otherwise, he’d have imparted his foot up a certain eager beaver’s southern orifice.

“You used a laser to do this? Not a hacksaw?”

The Saksonan across from me huffed. “You’re not amusing.”

“Neither is this.” I gloved, masked, then scanned the entire disaster. “Stomach is history. Ditto on both kidneys. Large intestine is ruptured in three, make that four, areas. Spleen is”—I used a pair of forceps to extract and hold it up for a better look—“totaled. Nice work, Vlaav.”

Thousands of dermal hemangiomas swelled, making the Saksonan appear like a bristling strawberry. “It’s not my fault!”

“It never is.” I dropped the tattered organ back into the abdominal cavity. “Let’s see, cause of death would be exsanguination, or traumatic shock induced by lack of anesthetic.” I placed my instrument on the discard tray. “Congratulations, Doctor. You’ve successfully murdered your first surgical patient.”

“You said I was doing a postmortem this morning. I didn’t realize it was still alive until I started the abdominal exploratory.” With an impatient, three-fingered yank, Vlaav tore off his mask and threw it on the deck. ‘’And this is
not
my first surgical patient.“

“If you want to have more, here’s a new rule: never cut anyone open until they are under general anesthetic, or you make sure they’re not breathing.”

We both turned around. Former League Lieutenant Wonlee stood just outside the exam room with a tray of food. He’d adapted a loosely woven garment as an orderly’s tunic to accommodate the thousands of sharp spines covering his body. For some odd reason, they were all standing on end. His hands went lax, and the tray hit the deck.

“You butchered him,” Wonlee said in a strangled voice.

The Lieutenant had been a medic, once upon a time, but he’d never done a surgical rotation. Vlaav and I were fairly well splattered with synplasma from the death throes, and I guess the sight of the body was, to an inexperienced layman, rather disturbing.

“It’s not a him, Won. It’s a training torso.” When that didn’t sink in, I punched a console button and the botched surgical simulation disappeared. “A dimensional, simulated facsimile. Not a
real person
.”

“Oh.” Wonlee took a deep breath, and his spines settled back down. “What happened to it?”

I stripped off my gloves. “Dr. Irde learned how
not
to conduct an appendectomy.”

Vlaav peeled his off at the same time. “You said to do an
autopsy
. I swear on my mother’s deities.”

“Your mom wouldn’t appreciate you swearing. And schedule yourself for an auditory scan. Your hearing stinks.” A strange odor reached my nose, and I glanced at the deck. I’d smelled nicer things in a biohazard container that hadn’t been emptied for a month. “What is that stuff?”

“Your dinner.” Won started cleaning up the mess.

Lately the Captain had been acting like
my
mother. “So he made you come and force-feed me for a change.”

That got me a “now, Doctor” look. “Since I was reporting for my shift, I offered to bring it down for him.”

I took a step back and gulped. “You programmed it, right?”

“No, as a matter of fact, the Captain prepared it personally.”

Personally. “Excuse me.” I ran.

After I finished vomiting into the nearest disposal unit, I sat back against the lavatory wall panel and pressed a damp cloth against my hot face. The maniac who constantly tortured my senses with his alien concoctions was going to pay for this. Big time.

The lavatory door panel slid open. “You are ill again.”

Speak of the Captain.

“You’re cooking again.” I took the hand he offered, and let him pull me to my feet. Then I thumped him on the chest, just out of principle. “So this is all your fault.”

The Captain was a Terran, like me. He disdained a uniform in favor of his usual black, unornamented tunic and trousers. Some things had changed since we’d met—like his blond hair, which he had let grow and now wore tied back in a queue. There were all kinds of new muscles on his long, swimmer’s body, courtesy of training with the Hsktskt and the Jorenians.

Other things hadn’t changed. His personality remained as chilly as ever. So did his expression. Carved masks had more life to them. But now it didn’t bother me. I knew what was behind Duncan Reever’s mask.

“You promised me you’d stay away from the prep unit.”

“As you assured me that you would only work standard shifts.” He slipped an arm around my waist and guided me to the cleanser unit. “Why are you covered in blood this time?”

“Simulated blood.” I bent over the basin and vigorously cleaned my teeth and rinsed my mouth, then I checked my reflection. Still a short, dark-haired, blue-eyed Terran. Maybe a little thinner than usual. I splashed my face with cold water. “Vlaav had another go at a Terran torso on the training simulator.”

He folded his arms and leaned against the wall beside me. “And?”

“And the torso lost.” I groped for a towel. “Make a note—if I ever need surgery, don’t let him near me.
You
do it.”

“Hold still.” Reever held me by the shoulder and blotted my face like I was a messy little kid. “You are trembling. You must eat, wife.”

He liked calling me that. Pleased and annoyed, I blew a piece of damp hair out of my eyes. “You don’t run my life, husband.”

Two badly scarred hands cradled my face, and before I could say another word I got thoroughly kissed. Reever raised his head after my pulse skyrocketed and I started wrinkling the front of his tunic.

“Pregnant.” I grinned as his hand went automatically to my abdomen, and spread over the tiny life growing in there. His fascination with the baby aroused all kinds of feelings in me. Not strictly of the maternal variety, either. “Stop that. You’re befuddling me.”

“Cherijo.” His palm made slow circles on my stomach. “Come back to our quarters with me.”

I wanted to. Even after two months of living with Reever, I still hadn’t quite made up for lost time. But then there was Vlaav. “Not now. I need to talk to my resident about taking a refresher course in Why We Employ Anesthesia Before We Cut.”

“Do it tomorrow. Come back with me now.” His mouth landed on mine again, long enough to make me
really
wrinkle the front of his tunic. Against my lips, he said, “I want to sleep with you, beloved.”

“Oh really?” Vlaav could practice sterilizing instruments. “Then you shouldn’t have kissed me like that.”

I dragged him off to our quarters.

Several hours later, I left our sleeping platform and went to check on the ship’s status. I didn’t want to wake Reever, so I left off the lights and audio. I pretended I wasn’t sick to my stomach, and covered in a glassy sweat. But I was.

The nightmares did that to me.

This time I hadn’t relived the horrors of the past. No, this bad dream had sprung from a signal I’d received from the
Sunlace
earlier that day. The latest batch of test results weren’t too promising. Squilyp, the Omorr Senior Healer on the Jorenian ship, wanted to perform another series. No drastic decisions about what to do could be made yet.

Mostly because I hadn’t told Reever about the problem.

Guilt had made me dream about what his reaction would be when he finally heard the news. Reever shoving me away. Reever flying off in a shuttle. Reever leaving me for good.

Reever won’t leave. It was only a dream, let it go.

According to the vidisplay, the L.T.F.
Perpetua
was close to Te Abanor, our next scheduled stop. We were halfway through our mission to return all the Catopsan slaves to their homeworlds.

Where’s the
Sunlace? I checked the external viewer and located the other ship off our port side.
Hi, guys
.