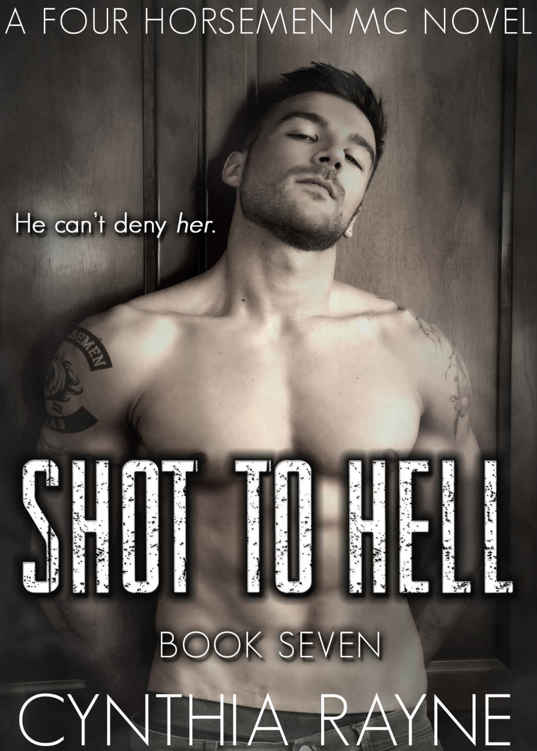 Books in the Series

Lance Corporal Jack Steele gave his best friend, Lance Corporal Abe Calhoun, the finger. “Stop bitchin’. I’ll be back before you know it.”

Abe gripped his rifle and, for a hot second, Steele wondered if his buddy might take a shot at him. Abe had been his best friend since high school. They’d gone to boot camp together and had been lucky enough to be assigned to the same unit.

Steele deserved his buddy’s wrath.  Leaving his post in the middle of the night was a major dick move, but Steele couldn’t help himself. The cock wants what the cock wants. He’d been working on a sweet little private from the food service detachment for a couple of weeks. She’d promised to meet up with him, and he wanted to lock this down before she changed her mind.

Pickings were slim in Afghanistan, and he had to take pussy wherever the opportunity presented itself. It’d been too damn long, and Steele needed to get laid.

The private wasn’t much to look at, but she had all the right parts. Steele had never been one for hearts and flowers.

Abe shuffled his feet. “And what happens if the enemy comes marchin’ through here?”

“What? You afraid to be alone in the dark or somethin’?”

Nothing ever happened on these long-ass, overnight guard shifts. So far, Steele had gotten piss-poor pay to stand in a fucking field with a rifle like a live-action scarecrow.

For the past month, their infantry unit had been assigned to guard poppy fields so they didn’t fall into Taliban hands. The decision had been made far above his fucking pay grade. Apparently, turning a blind eye to the drug trade and making nice with the locals bought the old US of A goodwill.

Steele figured winning the locals hearts and minds would be difficult if you hit ‘em in the wallet first.

But it still chapped Steele’s ass. He’d gone through the hell of basic training only to end up babysitting drugs. He’d come to this godforsaken place to be a hero and take down some terrorists. Which is what they’d been doing until his unit had pulled this bullshit duty. Steele wondered if their commanding officer had somehow fucked up and now they all had to pay because of it.

He’d been a good soldier boy long enough. The way he figured, he’d earned a twenty-minute break from plant duty to get his dick wet.

As Abe tried to peel the skin off Steele’s back with his eyes alone, Steele made himself presentable. He sniffed under his armpits and nodded. Not too bad. Then he popped a piece of minty gum into his mouth—battlefield hygiene wouldn’t stand in his way tonight.

“If you get caught, you’re in deep shit.”

Steele shrugged. “Not gonna happen.  All I’m askin’ for is a few minutes. If I’m gone longer, I’ll send Frost out here to keep you company. But I’m sure I’ll be back before the combat team comes trompin’ through here like a herd of buffalo on their way back to base.”

“Steele, I’m serious. I’ve got a bad feelin’ about this.” Abe scanned the stalks around them.

For a second, Steele almost gave in—Abe seemed spooked. But he shrugged it off. “You’re jealous because you gotta jerk off every night.”

“You get more pussy than a tomcat.” Abe didn’t even smile.

“Then you’ll let it go and cover for me?”

Abe blew out a breath.  “Fine, but I hope you get crabs.”

Steele didn’t stick around to argue. He grabbed his rifle and double-timed it to the mess hall. He had to catch the chick Marine before some other bastard took his place. “I’ll be back before you know it,” he called over his shoulder.

Those were the last words he’d said to Abe.

“What crawled up your ass and died?”

Steele glanced over to find Wendy, one of the club hellions, watching him, hands on her slim hips. Tonight, he’d tied one on and nailed her. Hellions were the wild women who hung out with his club—basically, biker groupies. They worked in club-owned businesses, offering cold comfort, and accomplishing any other tasks the brothers needed to accomplish.

“What?” Steele tried to focus on her.

Wendy was black-haired, green-eyed, and as thin as a fence post. Not his usual beat, but Steele loved women,
all
women—they were soft, warm, and so very distracting.  But when the fun ended, Steele hated the talking part. The dismount in one of these situations required finesse, and he’d always been a blunt instrument.

He’d hooked up with her in one of the crash rooms at Perdition, his MC’s clubhouse and bar. It’d been fast and unsatisfying. Usually, fucking made everything better, at least for a few brief moments. Since Coyote had been taken, he’d barely slept and didn’t eat much–he worked, he fucked, and he drank.

“You.” She made a fist, mocking him. “You gettin’ ready for a prize fight, or what?”

“I’m fine.” He’d fucked her, but he wouldn’t wuss out and start blabbing to her. Unlike his brothers, he didn’t go to pieces over a woman, and he never intended to tie himself down.

There’d been a love epidemic in the club–Ryker, Cowboy, Duke, Captain, Shep, Pretty Boy, and Axel had all fallen victim to relationships. Yep, commitment was going around like a bad case of the clap. Steele steered clear of it. Romance wasn’t in his plans.

Naked as a jaybird, Wendy sauntered to the end of the bed.

Steele watched her with halfhearted interest. The peaceful calm after his orgasm hadn’t lasted long. He felt edgy once more—couldn’t wait to get his hands on one of the Raptors—he’d teach them a little something about pain.

After balling up her drawers, she slipped them into the pocket of her skin-tight jeans before shimmying them up her legs.

She scrunched up her nose. “Whatever. Not my business.” She shrugged on her shirt before sliding her legs into a pair of knee-high, fuck-me boots.

As she approached the door, Steele launched into his patented speech to make sure there weren’t any misunderstandings. The last thing he needed was an emotional outburst. He’d been perfecting this bit for years.

That was easier than he’d expected. “Yeah, that’s right. I don’t do commitments. I’m the guy you fuck and forget.”

What the actual fuck?
Steele narrowed his eyes. Shouldn’t she be more broken up about this?  “Believe me, darlin’, you’re better off without me.”

“All the girls know about the speech, Steele. It’s not a big secret. This is a small town, and the word has gotten around.” Wendy ran a hand through her hair, smoothing it, then pouted at a dingy mirror on the wall, centerfold-style. She lined her lips with a tube of red lipstick she’d pulled from her pocket.

“That a fact?” Steele thought she looked put together, like she hadn’t been grinding her hips over his a few minutes ago.

She didn’t reply, but he could read between the lines.

Oh, huh-uh.
He prided himself on pleasuring women. Sure, he didn’t want to be a boyfriend, but he gave the ladies a good time. Making a woman come for him was a head rush. Steele loved the breathy moans, the way they tossed their hair, nipples peaking into two tight points and fingernails sinking into his back. He never tired of it, and they always came back for more. Steele didn’t mind obliging them…on his no-commitment terms, of course.

Lately, his sexual mojo had been on the fritz. The pretty lady lawyer had turned up her nose, and the sassy thief had said “no thanks” and shacked up with Axel instead.  Yeah, boring-as-hell Axel, and now hellions were giving him the brush off.

Fuck that…hard and up the ass without lube.

“C’mere, Wendy. We ain’t finished.” Steele crooked a finger and put on his slyest smile, the one he’d used on cheerleaders when he’d been a quarterback at Poteet High School.

The pom-pom girls had creamed their panties for him, and he’d screwed the whole damn squad his senior year with a half-dozen repeat customers. Being a football star from the wrong side of the tracks had given him bad boy sexual appeal, and he’d taken advantage of their breathless curiosity, which suited him fine. Not like he wanted to date any of those fluff chicks anyway.

Only one girl had captured his attention in high school, despite his best efforts to shut it down.

Wendy’s brows pulled together.  “Oh, yes, we are. I got stuff to do.” She sailed out the door like she’d already forgotten about him.

“Dammit.” Steele threw his legs over the bed and smashed his fist on the nightstand. He seized a lukewarm bottle of beer when it wobbled to keep it from crashing to the floor. Then he took a swig as he made a mental note to chat her up again. He couldn’t have any two-pump-chump rumors circulating around the club.

What if he was off his game because he’d gotten carved up like a turkey? He absently rubbed at the gauze taped to his chest. The Raptors had engraved their club symbol into his chest. The cuts still hurt like a bitch, despite the painkillers Duke had been feeding him. As soon as it healed, he planned on getting a big-ass, fucking Horsemen tattoo over it.

After he sliced the skin off some Raptors, of course.

Lieutenant General Chesty Puller, the finest fucking Marine there’s ever been, had once said that about the enemy. Steele wholeheartedly agreed. But what if the enemy is a bunch of cowardly dicks who’d gone into hiding after snatching your brother?

In true shit-out-of-luck fashion, Steele had no one to hit or hurt. Coyote, Steele’s best friend in the club, had been missing for nearly a week. Since Yo had been kidnapped, along with an ass-load of heroin on its way to Dallas for delivery, the Horsemen had scoped out all of the Raptor hideouts and had come up empty. The lily-livered bastards had taken off without a trace.

What if they’d already killed Coyote?

No, Steele refused to entertain the thought. He wouldn’t lose his brother and his best friend. Not again.

The Raptors must have taken Coyote for a reason, or they would’ve roughed him up and left him in the warehouse with Steele. If the Raptors planned on killing Coyote, they’d have done it already. His beaten and bloody body would’ve shown up at Perdition. The kid was tougher than he realized. After all, he’d held his own against Raptors before—he’d even run one of the bastards down. Coyote could do this. He could keep it together until the cavalry showed up, led by Steele, of course.

Once, the Raptors had shot up the clubhouse and killed one of the Horsemen at their meeting table—the fuckers weren’t known for sending understated messages. All Steele could do, for the moment, was stand around with his thumb up his ass.

He’d always been a man of action. Everyone should know their strengths, and he had his down. Steele didn’t like to plan a damn thing, so he left the prep work to smarter bastards. He’d rather be in the thick of it—his back against the wall, bashing heads together and kicking in teeth.  But he needed direction—a lead.

Until Steele had one, he was stuck thinking about days gone by and his past sins. Some things he couldn’t get out of his head, no matter how hard he tried. And since Coyote had been taken by the Raptors, he kept replaying one particular memory like a loop in his mind.