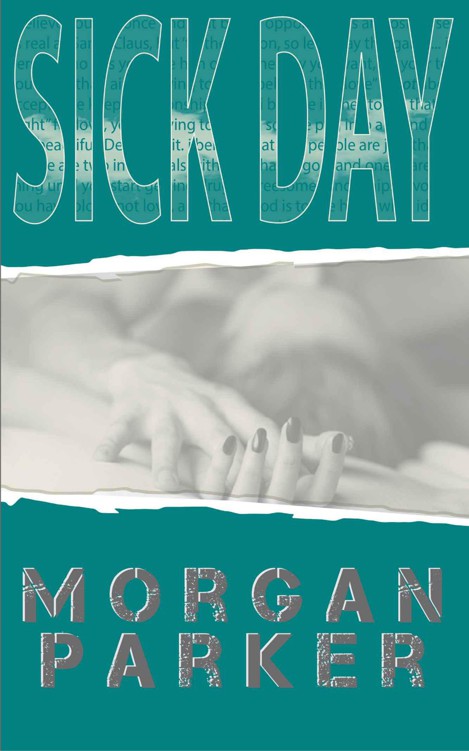 This is a work of fiction.
All characters, conversations, circumstances and incidents are products of the author’s imagination. Any and all references to real products, objects, locations, events, locations and people are meant to lend the reader a sense of authenticity but are used fictitiously.

With the exception of quoted text used in a published review, no part of this work can reproduced without the written permission of QuoteStork Media, Inc..

M
y bed at the Drake Hotel was big enough for both of us. We kicked our shoes off at the door and went straight to that bed. I jumped onto the mattress first, my feet landing where the pillows were and my head settling at the foot. I patted the space next to me, where I wanted Oliver to lie.

He complied with the same lame-ass, high-jump leap I had just attempted, but the mattress was so firm that we didn’t bounce at all, even as his 180-pound frame dropped next to me. He grunted, then edged closer to me. So close that his face was only a couple of inches from mine, a closeness that, judging by the blotchiness on his face, made him more uncomfortable than it made me.

I laughed at that discomfort.

“You’re supposed to sleep on this thing?” he asked.

I giggled like a schoolgirl because that was exactly how he made me feel. The fluttering in my stomach, the impending collapse of my legs earlier when he had laced his hand into mine while we strolled along Michigan Avenue after dinner. My hunger for his lips against mine, against me, all of me, every inch. Yes, like a schoolgirl. And not just because of the physical impression he was leaving on me.

I covered my crooked giggles with my hand, and his eyes didn’t seem bothered or even slightly curious about my oversized wedding ring.

This was exactly like a schoolgirl’s crush. I had only known Oliver since yesterday afternoon, yet here we lay on my hotel room bed, separated by a couple layers of clothes, our wedding bands, and roughly three inches of tension-infused space.

As my hand moved away from my face, I watched Oliver lick his lips. His pupils dilated as he focused on my mouth.

“What’s your favorite color?” he asked, his voice distant. I knew he was lost in me, in the fantasies about what our time in my hotel room could lead to.

I giggled again. This was getting stupid. “Orange is like saying a bus pass is your all-time
favoritest car in the whole wide world.”

We laughed together. It was getting late. If Oliver was anything like me, he hadn’t slept well last night. Our introduction on the plane yesterday—both of us hated flying, and the flight from Vegas had been a choppy one—our flirting in the airport, and then Oliver showing up today at my book signing and press conference, our surprise dinner, our walk, and now this.

At last, I reached out and grabbed his hand. His palm felt clammy, uncertain. I brought it to my chest, placed it above my breast so he wouldn’t have to get all nervous and awkward. I
knew
fear was what he felt because that was exactly what I felt, too.

“It’s okay, Oliver,” I told him. “I know your fears. But sometimes the best decisions are the ones we don’t make for ourselves. So I’ll make the decisions tonight.”

He took a deep breath, opened his mouth to say something, then changed his mind. We stared at each other for what felt like an eternity collapsing with the snap of fingers—a lifetime gone in the blink of an eye.

“Just stay with me tonight and let me memorize every last piece of you.”

M
y name is Olivia Warren, and just because this is my story, it doesn’t mean there’s a happily ever after at the end of it. I may have made my first night with Oliver Weaver sound prettier than the Holy Gardens at the gates of Heaven. The truth is that
pretty
cannot describe the majority of my relationship with that man.

For starters, the day we met we were both very much married and, to some extent, in love with our respective spouses. I didn’t mention that earlier because people generally don’t like cheaters. And loving someone, even if you don’t fuck them, is indeed cheating—emotional cheating.

That next morning, neither of us woke up because neither of us had fallen asleep in the first place. We rolled out of bed, and Oliver convinced me that today he would show me the city, all of it.

He chuckled. “It looks like you just sucked on a lemon! Okay, just the best parts.”

He took my hand and pulled me to the door, to our shoes, out to the hall, and to the elevators. We were acting like two kids trapped in the lives of two mid-lifers, struggling with lack of sleep. But we were far too jacked up on the adrenaline-rush of having found our soul mate to slow down and just breathe.

“You’ll love this,” he promised, and the next thing I remember, we were standing in a vast, all-white room. White floors, windows on two opposite walls. A white table setting with white linens, white side plates, and silver cutlery.

A waiter in a white shirt (and black pants) smiled and gestured for us to sit down. It was the only table in this large white space, but it felt cozy. Oliver made it feel that way.

I leaned forward on the table, my elbows on the edge as I propped my face up to take him in, to take
all
of this experience in. “Where are we?”

I nodded and wondered if he had drugged me. As the panic set in, I felt his hand on mine, and a gust of emotion flooded through me. All of this was like something out of a dream sequence in a crazy sci-fi movie. I imagined seeing the finest paintings, the most compelling pieces of art, and I felt the deepest emotion flicker through my head.

When my eyes opened, our lunch had arrived—a nice serving of salmon with a cute salad. The colors of the food were vibrant and alive.

Oliver and I talked about the blurry stuff of reality—our marriages, our kids, our jobs. The disappointment left by each of those things. Oliver paid the bill, and a heartbeat later, I was standing in front of a Monet painting, the train station one. Each stroke of Monet’s brush spoke to me in this moment of ultimate fatigue.

“Let’s get lost,” Oliver said, and we left the Art Institute of Chicago.

The next thing I knew, we were riding a Ferris wheel overlooking Chicago’s North and South shores. We walked to the Sears Tower after that, talking shit and laughing and careless. Then we found and sat on the hardest wooden benches in the world—they were at Union Station—and we stared up at the ceiling and got dizzy, as if we were watching the stars at night.

“I need to sleep,” I mumbled, my voice whiny and desperate even to my own ears.

We ran through the streets with stupid-big smiles on our faces, all the way back to the Drake, back up to my room, and to the hard bed where we fell asleep holding each other. And somehow—I don’t know how—it was love.

Within two days of knowing this wonderful, sweet man, I loved him more than anyone could ever believe possible.

But I did, I loved him. Hard and deep, like no human should be allowed to love. The kind of love that destroys you.

Director's Cut by Alton Gansky
Entity Mine by Karin Shah
Little Red: An Everland Ever After Tale by Caroline Lee
A Blood Seduction by Pamela Palmer
Legionary: Viper of the North by Gordon Doherty
Texas Bloodshed by William W. Johnstone
Go, Ivy, Go! by Lorena McCourtney
5 A Sporting Murder by Chester D. Campbell
Love Makes the Difference (Sully Point Book 1) by Smith, Nicole
Her Every Pleasure by Gaelen Foley