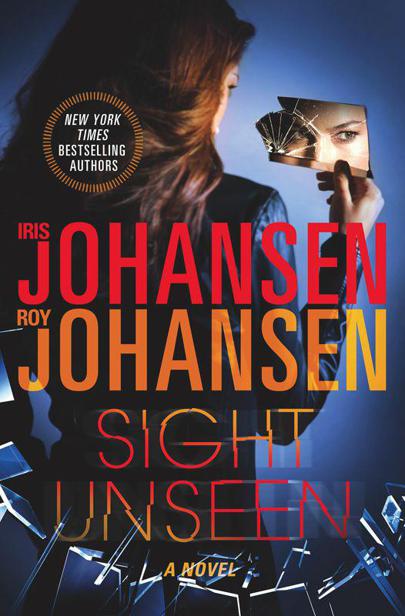 The authors and publisher have provided this e-book to you for your personal use only. You may not make this e-book publicly available in any way.
Copyright infringement is against the law. If you believe the copy of this e-book you are reading infringes on the authors’ copyright, please notify the publisher at:

Also by Iris and Roy Johansen

DAMN, SHE WAS GOING
to kill him.

Gary Decker turned onto Market Street and gave the accelerator some extra juice. On this of all nights, he hadn’t wanted to be late picking up Corrine. She had arranged dinner and drinks with friends at Nobu, an occasion she had pitched as a casual get-together. But he knew better. It was another attempt to parade him before her friends and convince them that he wasn’t the jerk they all thought he was.

Screw ’em. He was marrying Corrine, not those immature losers.

He smiled. With an attitude like that, how could he not win them over?

Ah, hell. He could do this. He did the dog and pony show for his firm’s obnoxious clients; he could do it for his fiancée’s judgmental college pals.

He called Corrine as he pulled up to her Sabre Springs home, surprised that she hadn’t already phoned to give him an earful for being so late.

He glanced up at the two-story Spanish-style house. Dark. Had she gotten pissed and left without him?

He cut the engine and walked toward the front door. He knocked. No answer. He pulled out his key and let himself inside.

Soft classical music wafted from the stereo in the living room.

Weird. Not Corrine’s style at all.

He moved into the living room. What little light there was came from a single lamp in the corner.

Gary froze when he saw Corrine. She was seated on the sofa, dressed like an uptight business executive in her tweed jacket and skirt. Her hair was pulled back, and she wore oversized black spectacles.

Definitely not Corrine’s usual style. She managed a funky La Jolla art gallery, and her attire, during work and after, often consisted of Capri slacks and a tie-dyed T-shirt.

Gary smiled. “Hey, you didn’t tell me we had to wear costumes tonight. What are you supposed to be, a corporate lawyer?”

Damn, she
was
pissed.

Okay, he’d better be both humble and persuasive.

He moved closer to her. “Don’t get me wrong. I kind of like those glasses. Maybe you can wear them for me later?” He sat down next to her and gently rubbed her thigh.

He pulled the glasses from her face. Her bloodshot eyes were wide open and stared back at him.

Only then did he notice the bruising on her neck.

He jumped to his feet and stumbled backward.

It was even harder to believe since this …
thing
didn’t even look like her.

He fumbled for his phone, his hands shaking.

Something snapped around his neck.

He felt his attacker’s hot breath in his ear.

Darkness creeping over him …

It wasn’t just breath, he realized as the darkness overtook him.

It was his killer’s laughter.

Kendra Michaels stood and shook hands with the handsome man who had just dashed into the Gaslamp Bar and Restaurant. She was experiencing a sinking feeling. Halley’s smile was a couple shades too white. He was also too good-looking and too well dressed. He breathed casual elegance and easy charm.

Mom, what have you gotten me into?

“Yes.” She forced a smile. “Sorry I had to cancel last week. Things got complicated.”

He shrugged. “It happens. But we’re here now, so that’s what matters.”

He was also too polite.

Oh, for God’s sake, give the guy a break.

It was her mother’s first attempt at arranging a blind date, and anyone but Kendra would have said that she’d done well.

Of course, the evening was still young.

Kendra had come straight from the office, where she had conducted five music-therapy sessions back-to-back. Her clients couldn’t have been more different from each other, ranging in age from eight months to ninety-two years. Her techniques varied for each patient, with simple mood-soothing music for some, with more complex exercises to draw out others who were autistic and emotionally withdrawn. Not all would respond to her techniques, but she had high hopes for a few of them. Despite the presence of this charming and too-perfect man in front of her, she wanted nothing more than to go home and write up her impressions while the sessions were still fresh in her mind.

Don’t let him see it. She had promised Mom. She smiled. “Yes, that’s all that matters.”

They took a booth in the bar and placed their drink orders. Dean drummed his fingers on the tabletop. “Your mother told me a lot about you, but I forgot almost all of it instantly.”

Now that was both honest and promising. “You sure know how to flatter a girl.”

“It’s not because I wasn’t interested. I was. But after she told me you used to be blind, I had trouble thinking about anything else.”

Way to go, Mom. “She actually led with that?”

“Good salesmanship. I was intrigued.”

“I don’t need anyone to sell me. What you see is what you get.”

“Of course you don’t. Poor choice of words. I’m sure you’re as leery of setups as I am. What exactly did she say to convince you to go out with me?”

“She said if I didn’t, she would use her keys to scratch disparaging things about me on the hood of my car.”

He smiled that charming smile again. “She didn’t really say that.”

“She did. And she said she would let all my plants die the next time I had to attend an overseas conference. So you see, I had little choice.”

“Now it’s my turn to be flattered.”

“I think she was joking, at least about the car.”

“This would make some interesting fodder for the next departmental dinner. Do you mind if I tell the other faculty members?”

She smiled. “I wish you would. Though from what I understand, it probably wouldn’t surprise anyone. Ask around. She’s made quite a reputation for herself.”

He chuckled. “You’re right about that.”

Dean and her mother, Professor Diane Michaels, were both history professors at the University of California Campus in La Jolla. Mom had been cooking up this date practically from the time Halley had taken over the post the previous spring. But as Kendra’s eyes darted over him, she went still with surprise.

How … interesting. Did Mom have any idea that Halley—?

“So you were born blind?” he asked.

She sipped her wine, still trying to process her observations. “Yes. And I stayed that way for the first twenty years of my life.”

“I don’t know perfectly, but well enough. Probably better than you without your contact lenses.”

He raised his eyebrows. “If you could see that in this lighting, then you’re doing all right.”

She nodded toward the bar’s street window. “Car headlights helped. My mother actually deserves most of the credit for how I turned out. I never felt handicapped. I learned to use what I had.”

“And you gained your sight from some kind of stem-cell procedure?”

She nodded again. “In England. They did a lot of the early work in ocular regeneration. It was an amazing time of my life, and a little overwhelming.”

“I can only imagine.”

No, he couldn’t even begin to imagine, and Kendra didn’t want to talk about it. She glanced up at a large TV over the bar. A live remote newscast was at the scene of a horrific traffic accident, and the reporter was struggling to make sense of the carnage and twisted metal strewn over the roadway.

Dean turned to see what had grabbed her attention. “Quite a pileup.”

She nodded, her gaze narrowed on the screen. A helicopter shot of the scene showed that the roadway was covered with work lights, police cars, and fire trucks, and was atop a tall white bridge.

She suddenly straightened in her chair.

Then she stood up and stepped closer to the television. Dean quickly joined her at the bar.

“The Cabrillo State Bridge,” she said, studying the overview that the helicopter shot offered.

“The one that goes toward the zoo?”

She nodded. “Those
idiots.
They’re treating it like an accident.”

He turned toward her. “Why wouldn’t they?”

“Because it’s not an accident.”

Dean laughed, but cut it short when he realized she was serious.

Kendra was still staring at the television and shook her head in disgust. “They’re blowing it. I can’t believe it. They’re totally blowing it.”

Kendra muttered a curse beneath her breath. “I wish we’d never seen this damn thing.”

“I’m starting to wish that, too,” he said dryly. “Want me to ask the bartender to change the channel?”

“Come on, let’s go back and sit down. I’ll tell you all about myself.” He tried to take her arm, but she remained planted at the bar.

“I know quite a bit already,” she said absently, her gaze still locked on the television. “I know you’ve been to prison.”

He was silent. “Nobody knows that.”

“You grew up in Florida, then spent some time in the Northeast. Maybe your college years? Are you an Ivy Leaguer?”

“What? No, life’s too short.” She swore again. “I can’t believe those damned cops don’t see what’s right in front of them.”

“Let’s get back to me for a second. Does your mother know about the prison thing? Because if this got out—”

“Don’t sweat it. I didn’t know until two minutes ago. I was just looking you over to see what Mom saw in you, and it popped up.”

“You’re a motorcycle enthusiast. That’s where a lot of your time and money goes. Not just riding, but the tinkering. You have a Harley Sportster. I’m thinking you did some degreasing on it today.”

“I take that as a confirmation.”

“Either you were spying on me, or you’re psychic.”

“Neither.” She was still concentrating on the screen. “Fools. Not one homicide detective there. Not one. All accident investigators.”

Dean smiled. “Your mother said you were very observant and not to let it rattle me. I’m just now realizing what she meant by that. And, for the record, you did rattle me.”

“Sorry. Mom always tells me to wait and let things just come out in conversation. I was distracted.”

“Don’t be sorry. I like it. I’d always heard that blind people develop their other senses to an amazing degree. I guess you’re living proof. But it must be more than that.”

“I’m a little obsessive. No, a lot obsessive. I now treasure everything that I can see. And I won’t let go of what I learned from my other senses when I was blind. I don’t take anything for granted.”

“I’ll accept that answer. But you have to tell me how you knew all those things about me.”

“Sure.” She pointed to the television screen. “But first I need you to drive me there.”

“It’s not an accident, remember?”

Lion of Midnight by Aliyah Burke
My Soul to Keep by Rachel Vincent
Summoned to Tourney by Mercedes Lackey; Ellen Guon
Joshua Dread by Lee Bacon
The Weaver's Inheritance by Kate Sedley
Flea Market Fatal by Brianna Bates
Duchess by Susan May Warren
A Dance with Darkness: An Angelfire Novella (HarperTeen Impulse) by Moulton, Courtney Allison
This Raging Light by Estelle Laure
The Titanic Murders by Max Allan Collins