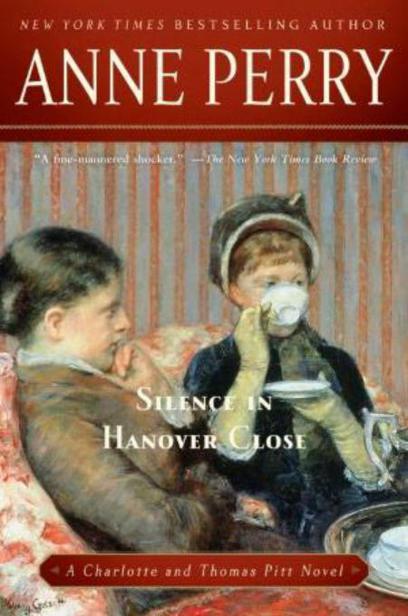 who was part of the inspiration

“P
OLICE STATION, SIR!”
the cabbie said loudly, even before the horse’s feet were still. His voice was thick with distaste; he did not like these places. The fact that this one was located in the aristocratic elegance of Mayfair was no compensation.

Pitt climbed out, paid him, and went up the stone steps and in through the doors.

“Yes sir?” the sergeant at the desk said without interest.

“I am Inspector Pitt from Bow Street,” Pitt said crisply. “I’d like to see the senior officer in charge.”

The sergeant took a deep breath, eyeing Pitt critically. He did not meet the sergeant’s conception of a senior officer, not by a long way: he was quite casual. In fact he was downright scruffy, clothes all a mismatch, pockets full of rubbish. The man let the force down. Looked as if he’d never met with a barber’s scissors—more like a pair of garden shears. Still, the sergeant had heard Pitt’s name and spoke with some respect.

“Yes sir. That would be Inspector Mowbray. I’ll let ’im know you’re ’ere. Can I tell ’im what for, sir?”

“Is that so, sir.” The sergeant turned stolidly and went out, leaving Pitt standing until he returned several minutes later, still without haste. “If you go through that door, second on the left, sir, Inspector Mowbray will see you.”

Mowbray was a very dark, balding man with an intelligent face; he looked decidedly curious when Pitt came in and closed the door.

“Pitt,” he introduced himself, and held out his hand.

“Heard of you.” Mowbray took Pitt’s hand firmly. “What can I do?”

“I need to see the records of your investigation of a burglary in Hanover Close, about three years ago—October seventeenth, 1884, to be precise.”

Mowbray’s face showed rueful surprise. “Bad business, that. Don’t often get murder in a household burglary, not in this area. Ugly, very ugly. Never found a thing.” His eyebrows rose hopefully. “Have you got something? One of the stolen pieces turned up at last?”

“No, nothing at all. Sorry,” Pitt apologized. He felt both guilty for taking the man’s case from him and angry because this further poking around was evasive, not his real purpose, and probably futile anyway.

Pitt hated the way he had been brought into the case. Mowbray should have been the one doing this, but because the case involved the delicate question of a woman’s reputation, a distinguished victim from a powerful family, and above all the almost inaudible whisper of the possibility of treason, the Foreign Office had used its influence to place the investigation through Ballarat, where they felt they could keep some control over it. Superintendent Ballarat was a man with excellent judgment of what his superiors required, and a rich ambition to rise high enough in his profession to become socially acceptable, perhaps even a self-made gentleman. He did not realize that those he most wished to impress were always able to distinguish a man’s origins simply by the way he carried himself, by the turn of a vowel in his mouth.

Pitt was a gamekeeper’s son who had grown up on a large country estate. He had been educated as a companion to the son of the house and had a manner acceptable to the gentry. He had also married considerably above himself, gaining an understanding of a social class closed to most ordinary policemen. Ballarat disliked Pitt and resented his manner, which he considered insolent. But Ballarat was obliged to admit that Pitt was unquestionably the best man for this investigation. He had done so with an ill grace.

Mowbray was staring at Pitt with only slight disappointment, and it quickly disappeared; apparently he had expected nothing. “Oh. Well, you’d better speak to Constable Lowther first; he found the body. And of course you can read the reports that were written at the time. There isn’t much.” He shook his head. “We tried hard, but there were no witnesses, and none of the stolen pieces ever turned up. We thought of the possibility of an inside job—we questioned the entire staff and came up with nothing.”

“I daresay I’ll do the same,” Pitt said in an oblique apology.

“Have a cup of tea while I send for Lowther?” Mowbray offered. “It’s a vile day. I wouldn’t be surprised if it snows before Christmas.”

Ten minutes later Pitt was sitting in another small, chilly room with a gas lamp hissing on the wall above a scratched wooden table. A thin file of papers rested on it, and opposite Pitt a stiff, self-conscious constable stood at attention, buttons gleaming.

Pitt told him to sit down and be easy.

“Yes sir,” Lowther said nervously. “I can remember that murder in ’anover Close pretty clear, sir. What is it as yer wants ter know?”

“Everything.” Pitt took the teapot and filled a white enamel mug without asking. He passed it to Lowther, who took it with round-eyed surprise. “Thank you, sir.” He swallowed gratefully, composed himself, and began in a low voice, “It was five past three on the mornin’ of October seventeenth, just over three year ago. I were on night duty then, an’ I passed along ’anover Close—”

Pitt smiled very slightly. “I know that’s what it’s meant to be. Are you sure nothing held you up anywhere that night?” He deliberately gave Lowther the chance to escape blame if necessary without telling less than the truth. “No trouble anywhere?”

“No sir.” Lowther faced him with totally guileless blue eyes. “Sometimes I do get ’eld up, but not that night. I were round exact, give or take no more’n a minute. That was why I noticed the broken winder at number two partic’lar, because I knew it weren’t broke twenty minutes afore. An’ it were a front winder, too, which is kind o’ funny. Burglars usually goes ter the back, wiv a little nipper skinny enough to get through the bars and whip round an’ let ’em in.”

“So I went to the door o’ number two an’ knocked,” Lowther went on. “I ’ad ter raise an ’ell of a row—” He flushed. “Beg yer pardon, sir; a lot o’ noise, before anyone came down. Arter about five minutes a footman opened up. ’Alf asleep, ’e were; ’ad a coat over ’is nightshirt. I told ’im abaht the winder as was broke, an’ ’e was startled like, an’ took me straight to the room at the front, which was the libr’y.” The constable took a deep breath, but his eyes held Pitt’s without wavering. “I saw immediate that there was trouble: two ’ard-back chairs was turned over, lyin’ on their sides, there was ’alf a dozen books knocked on the floor, upset like, and a decanter spilled on a table near the winder as was broke and the glass lyin’ on the floor, shinin’ in the light.”

“Footman turned up the gas lamps,” Lowther explained. “ ’E were fair shook, I’d swear to that.”

“Then what?” Pitt prompted.

“I went further into the room.” Lowther’s face puckered as the memory of the hard stab of human mortality came back to him. “I saw the body of a man on the floor, sir, ’alf on ’is face, sort o’ legs bent a bit, like ’e’d bin took by surprise from be’ind. ’Is ’ead were matted wi’ blood”—he touched his own right temple at the hairline—“an’ there were a big bronze ’orse on a stand, ’bout ten inches ’igh, lyin’ on the carpet ’bout eighteen inches away from ’im. ’E were wearing a dressin’ robe over a silk nightshirt, an’ ’ad slippers on ’is feet.

“I went over to ’im ter see if there were anythink I could do for ’im, though I thought ’e were dead even then.” The look of an adult compassion for a child crossed his face. “The footman can’t ’a bin more’n twenty, if ’e were that, an’ ’e got took queer an’ sat down rather sudden. ’E said, ‘Oh Gawd—it’s Mister Robert! Poor Mrs. York!’ ”

“And the man was dead?” Pitt said.

“Yes sir, quite dead. But ’e were still warm. An’ o’ course, I knew the winder ’adn’t bin broke when I passed twenty minutes afore.”

“Well, it were plain ’e were murdered, an’ it looked like someone’d broke in: the glass were all inside, and the catch were undone.” His face clouded. “But a shockin’ amacher job it were; no star-glazin’ nor nuthin’—an’ such a mess!”

Pitt did not need to ask what star-glazing was; many expert thieves used the trick of pasting paper over glass to hold all the shards while cutting a neat, silent circle which could be lifted out so a hand could be inserted to open the latch. A master cracksman could do the job in fifteen seconds.

“I asked the footman if they ’ad one o’ them telephone instruments,” Lowther continued. “ ’E said as they ’ad, so I went out o’ the libr’y an’ told ’im to stay at the door. I found the instrument and called the station an’ reported the crime. Then the butler came down—’e must ’ave ’eard the noise and when the footman didn’t go back upstairs, ’e come ter see what was goin’ on. ’E formally identified the dead man as Mr. Robert York, the son o’ the Honorable Piers York, the master o’ the ’ouse. But ’e was away from ’ome on business, so there was nothin’ for it but to tell the elder Mrs. York, the victim’s mother. The butler sent for ’er lady’s maid, in case she were overcome at the news. But when she came down and we ’ad ter tell ’er, she were very calm, very dignified.” He sighed in admiration. “Makes yer realize what real Quality is. She were white as a ghost an’ looked like she were dead ’erself, poor soul, but she never wept in front of us, just asked ’er maid to steady ’er a bit.”

Pitt knew of many great women who were bred to bear physical pain, loneliness, or bereavement by always showing the world a serene face, shedding all their tears in private. They were the sort of women who had sent their husbands and sons to battle on the fields of Waterloo and Balaklava, or to explore the Hindu Kush or find the source of the Blue Nile, and then to settle and administer the empire. Many had gone themselves into unknown lands, enduring appalling privation and the loss of every familiar sight and sound. In his mind Mrs. York was such a woman.

Lowther went on quietly, recalling the somber house and its grief. “I asked them if anything were missing as they knew. It were ’ard to ’ave ter ask a lady at such a time, but we ’ad ter know. She were quite calm and jus’ walked round the room careful like, and she told us that as far as she could say, there was two silver framed minicher portraits dated 1773, a crystal paperweight engraved with a design o’ scrolls and flowers, a small silver jug used fer fla’hers—and that weren’t ’ard ter come at, because the fla’hers theirselves was on the floor and the water spilled on the carpet; don’t know ’ow we missed seein’ it before—an’ a first edition of a book by Jonathan Swift. She said as she couldn’t see anythin’ else.”

“Where was the book kept?”

“On the shelves with the other books, Mr. Pitt—which means as ’e knew it were there! I asked, and she said as it didn’t look nothin’ special from the back of it you’d see ordinary.”