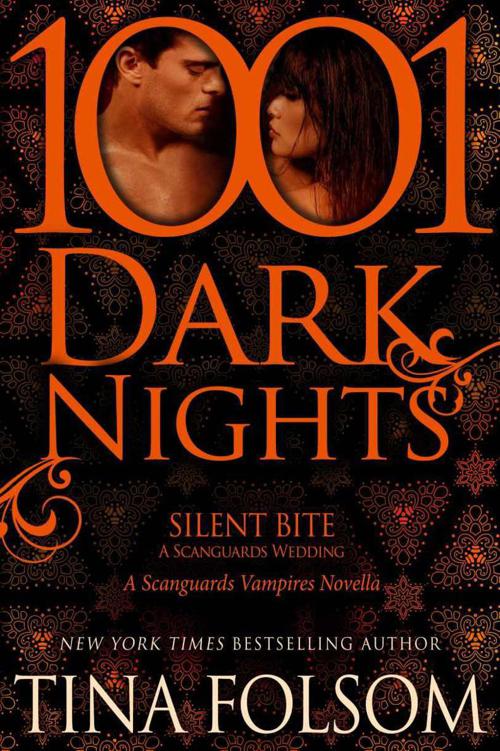 Newbie vampire Oliver and Ursula, the woman he saved from a blood brothel, are finally tying the knot. But with Ursula’s old-fashioned Chinese parents arriving in town for the traditional wedding, chaos soon breaks out—with Oliver always one step away from accidentally revealing to his soon-to-be in-laws that he and his extended Scanguards family are vampires.

And amidst all the chaos and confusion, a stalker lurks and threatens to tear Ursula and Oliver apart before they can blood-bond.

An excerpt from Oliver’s Hunger by Tina Folsom

(Persian: شهریار, "king") married a new virgin, and then

At the sight of Ursula’s pale neck, Oliver felt a shiver race down his spine and shoot into his balls like a lance. It was a pleasurable kind of pain that he experienced: intense, yet at the same time he didn’t want it to stop.

His fingers elongated, and his fingernails turned into sharp barbs. They were the claws of a beast because that’s what he still was inside, what he would always be, despite his refined exterior and the gentle shell he wore for everybody.

Ursula was the only one who knew better because she saw it every day and every night: the hunger that still simmered so closely under the surface. The insatiable hunger for blood. But it was different now.

Right after his turning, he’d sunk his fangs into any neck that was unfortunate enough to cross his path. Now, over half a year later, his taste had become much more sophisticated. Still, there was nothing refined about it. Nothing gentle or sweet. Nor civilized.

Only one thing had changed. He cared about the woman who offered her neck night after night more than he’d ever cared about anybody. He’d fallen in love with her before ever tasting her blood, before he even truly knew her, and he wouldn’t hesitate to sacrifice his own life in order to save hers.

They hadn’t been apart since the night he’d first bitten her, when she’d freely offered him her vein, despite the ordeal she’d been through for three long years. Despite the disgust she’d associated with the act until then. But Ursula had pushed her fears aside and given herself to him, trusted him and put the nightmare she’d experienced at the blood brothel aside.

Because she trusted him not to hurt her.

“What’s wrong?” Ursula’s voice came from the closet from which she removed her clothes and packed them into several large boxes.

“This!” He pointed to the moving boxes.

She tilted her head to the side and sighed heavily, her almond-shaped eyes begging for understanding. When she pushed a strand of her straight, raven-black hair behind her shoulder, the gesture reminded him of what it felt like when he buried his face in her hair and smelled her unique scent, a scent that came from her special blood. Blood that had the power to drug a vampire. Blood so addictive that his friends and colleagues at Scanguards had tried to keep him from her when they’d first found out.

“But we agreed,” she said softly.

Oliver took a step toward her, the beast inside him howling and demanding to be let out of its cage. “I know we agreed, but that doesn’t mean I have to like it.”

“It’s not easy for me either,” she replied, dropping a stack of T-shirts into a box and moving toward him with cat-like grace.

He’d always found her beautiful, ever since the first night she’d literally fallen into his arms in one of the dingiest parts of San Francisco. He realized that he’d never had a chance at resisting her, not even if her blood had been ordinary. Not even then would he have been able to disentangle himself from the Asian beauty who made his heart race whenever he looked at her.

Though his heart wasn’t the only organ that coveted her.

How he was supposed to survive without her, he couldn’t fathom.

“Please,” she whispered when she reached him, placing her palm on his cheek. “Don’t make this any harder than it is.”

At her choice of words, he took her hand and slipped it to the front of his jeans, pressing it against the bulge that had formed there. The bulge that was ever present when he was near her.

Ursula chuckled. “Is that all you think of?”

Oliver slid his hand on her nape, pulling her to him. “No. I also think of not being able to do this.”

He brought his lips to hers, gently pressing against her mouth. When he licked against the seam of her lips, she parted them lightly, and her breath rushed toward him.

“Won’t you reconsider?” he coaxed her.

But he didn’t want to accept her answer. “Imagine what you’ll be missing.” He captured her mouth fully and slid his tongue between her parted lips, exploring her warmth, dancing with her tongue.

Ursula severed her lips from his. “Oliver, we don’t have time.”

“Just one last time,” he insisted and busied himself with tugging on her T-shirt, sliding it up her torso.

He silenced her protest with a kiss and slid his hands underneath her shirt, caressing her soft skin. When his hands moved high up and encountered her bra, he stopped for a brief moment. Why she bothered to wear one, he wasn’t sure. Her young breasts were perfectly firm and round and needed no support. Besides, she never wore it for long, because he always found a way of stripping her of it so he could caress her boobs whenever he wanted to—which was frequently.

It took Oliver all of two seconds to find the clasp of her bra and open it. Immediately, he slid his hands under her bra and cupped her breasts, squeezing them lightly.

She moaned into his mouth, and at the same time he heard her heartbeat accelerate. Touching her breasts and fondling her nipples never failed to arouse her. Even though they didn’t have the time for this now, she responded to him as if her body couldn’t help itself.

“There you go, baby,” he murmured, releasing her lips for a brief moment. “You want this too.” He inhaled her heady scent. “You can’t wait to feel me inside you.”

“Oliver, this is crazy. We have to get to the airport.” Despite her protest, she didn’t push him away but pressed her pelvis against his rigid cock.

“We have a few minutes.”

And he was going to take advantage of the time they had left. Without allowing her any further protest, he pulled her T-shirt over her head and slipped the bra off her shoulders, dropping it carelessly to the floor.

“Undress me,” he ordered while he gazed at her beautiful breasts that were topped with dark nipples. Hard nipples. Yes, there was no denying that she was as aroused as he.

Ursula let out a sigh.

“You know I’ll make it worth your while. I always do,” he whispered, pressing a kiss to her neck and grazing her skin with the sharp fangs that had already descended.

No more protests came over her lips. Instead, her hands went to work, freeing him of his shirt, then opening the button and zipper of his pants. When she pushed them over his hips, he helped her and stepped out of them. Before she could free him of his boxer briefs, he helped her take off her own pants.

She wore only a tiny G-string that barely covered any of her enticing flesh. On top of it, the material was practically see-through and hid nothing from his vampire vision.

Oliver licked his lips in anticipation of what would happen now. He loved satisfying two of his greatest cravings at once. Two birds with one stone. Not only was it utterly thrilling to take her blood while he was inside her, in his and Ursula’s case it was also necessary. Only after she achieved an orgasm would the drugging effect of her blood be muted for a short while so that imbibing on it wouldn’t turn him into a crazed addict. Less than an hour after her orgasm, her blood would be just as dangerous as before and therefore off-limits to him.

A Wind of Change by Bella Forrest
Sky Run by Alex Shearer
The Amish Heart of Ice Mountain by Kelly Long
The Bride Raffle by Lisa Plumley
The Beautiful Thing That Awaits Us All by Laird Barron
Flora's War by Pamela Rushby
Triple Beat-nook by Mari Carr
Love Delivered by Love Belvin
Colours in the Steel by K J. Parker
Mr. Potter by Jamaica Kincaid