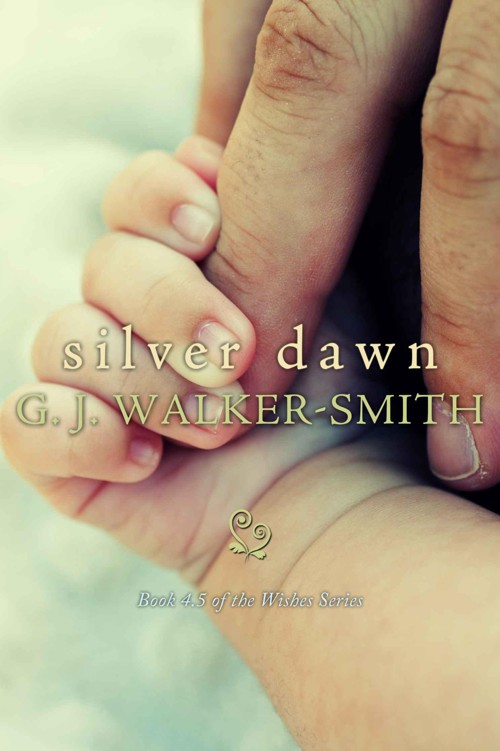 Other Books by G.J. Walker-Smith

All rights reserved. No part of this book may be copied or reproduced without the written consent of the author.

This is a work of fiction. Names, characters, places and incidents are the product of the author’s imagination. Any resemblance to actual events, places or people, living or dead, is coincidental.

24. Take Your Wife To Work Day

I hate black crows. There’s something about their beady eyes and jet black feathers that terrifies me. I’d rather encounter a great white shark while surfing than one black crow in the garden.

Even as a little girl she could smell fear. Once she caught on to my aversion to the beastly black birds, she started torturing me with a creepy little poem.

One crow for sorrow,

Three crows for a wedding,

Four crows for a birth.

She even perfected the horror movie voice and demon expression while reciting it. To this day, I find it hard to fathom how a child of mine could so closely resemble something out of
The Exorcist
.

The poem stuck with me for a few reasons. First, I rarely see more than one crow at a time, which is disturbing. Second, when I do see two together they bring me no happiness. There’s no mirth to be had when crows are around.

We stood on the veranda, looking down at the evil crow annihilating the apple tree near the driveway.

“Why does it trouble you so much?” she asked, giggling. “It’s just a harmless bird.”

I pointed at the tree but looked at her. “It’s evil, Gabrielle,” I insisted. “It’s an apple stealing, evil scavenger.”

“Today they’re apples,” I muttered. “What happens when apples don’t satisfy him anymore? When he storms the veranda and steals you away, I won’t save you.”

She rubbed her hand over her big belly. “I’d like to see him try,” she replied. “If he can lift me off my feet, he deserves to have me.”

My eyes drifted back to the crow and the excess of wasted fruit that was thudding to the ground. An eight-month pregnant French woman might just be his match, especially Gabrielle. She wouldn’t exactly go quietly.

“Is it the colour of them that troubles you?” she asked.

“Partly,” I muttered, still staring the crow down.

“I might paint some crows.” It almost sounded as if she was threatening me. “I shall include them on the mural wall in the nursery.”

Gabi had been talking about her mural wall for months, but it had remained blank while she waited for inspiration to hit. As far as I was concerned, black crows were not inspiration. Our kid would never sleep if he had a wall of feathered beasts staring at him.

“That’s one of the worst suggestions I’ve ever heard you make.”

She dropped her head and laughed. “I won’t make them black. It shall be my interpretation. They’ll be blue and orange and fabulous.”

I took a step to the side and draped my arm over her shoulder. “They’ll still be crows, Gabs.”

Gabrielle was high maintenance lately, which meant I needed to spend more time at home. Hanging out with her was hardly a chore, but being at the café while Lily Tate was working was.

I’d wrestled with the decision to hire her for weeks before actually biting the bullet and giving her a job. Beggars can’t be choosers. A job in a small town café wasn’t exactly a sought after position and after a month of advertising, Lily was the only one who applied. That made me a beggar.

“How do you think they get the sugar into these tiny packets?” asked Lily, waving the sachet at me.

I shrugged. “They use tiny people with tiny hands. They’re called sugar loaders.”

I shook my head, marvelling at the idiocy. “Lily, don’t you have something to do?”

She straightened up and dropped the sugar packet on the counter. “Yes, actually. I was wondering if I could go home early today. It’s Jasmine’s baby shower.”

I did all I could to stop myself shuddering. Jasmine’s baby announcement came just three weeks after ours. The Davis baby was already a superstar around town. Everybody knew about him, and according to Lily, he already had over a hundred Facebook friends. The stupidity was relentless.

“Yeah, you can go,” I permitted. “I’m sure Jasmine needs you more than I do.”

“She always needs me.” She rolled her eyes. “Wade’s pretty much useless.”

I agreed. Every time he came into the café, conversation would invariably turn to babies. The last little bonding chat we had was particularly difficult.

“I just can’t see how she’s going to get that thing out,” he said making me cringe. “She’s going to squeal like a pig.”

He was probably right, but I tried not to put too much thought into it. Picturing Jasmine in that light is something I’d never fully recover from.

“You should’ve heard her scream when the twins were born,” he’d added.

The Davis twins were born about a year after Bridget, arriving to fanfare and celebration befitting a royal baby. As far as proud fathers go, Wade was the proudest. He’d taken it as some kind of massive personal achievement.

“Two at once,” he marvelled when I congratulated him. “That’s some awesome breeding right there.”

That was a matter of opinion. The boy, Lincoln, was a little terror. I thought he was shifty from the first minute I laid eyes on him. At the time, Gabrielle had scolded me for saying so. Once he became mobile and started tearing up the café every time his mother brought him in, she soon changed her tune.

The girl was a little less hardcore. Wade and Jasmine named her Cheyne, but insisted that everyone call her Cheynie.

There wasn’t much chance of that mistake being made. The poor little thing was constantly dolled up in an excess of pink and glitter. Every time I saw her I became just that little bit more thankful to be having a son. I’d done my time with all things pink and sparkly. I was looking forward to dirt and snails.

Gabrielle had never had anything good to say about Jasmine, and now that they had babies due around the same time relations were even more strained. Despite this, she still accepted an invitation to the Davis baby shower.

She arrived at the café just a few minutes after Lily left, looking totally miserable.

“I do not want to go to the party, Alex,” she announced, frowning.

At least she was being polite about it. My Marseillaise princess had always been a tad dramatic, but nothing compared to the ramped up pregnant version I was dealing with these days. She’d even taken to swearing on occasion, usually out of context, but always with passion.

“Don’t go then,” I suggested. “You can spend the afternoon with me.”

Gabi slowly walked over to the counter, because Gabi walked slowly everywhere. “What do you have planned?”

“I’m going to the cottage to pick up Bridget’s cot,” I replied. “I think it’s time we set it up in the nursery.”

“I haven’t finished painting the wall yet,” she complained.

I reached for her hand and pulled her a step closer to me. “Babe, you haven’t started the wall yet,” I reminded. “He can do without a mural. He can’t do without a bed.”

Gabrielle was too polite to blow off the baby shower. Our plan was to make a five minute appearance, hand over the gift and bolt. Gabi obviously couldn’t run, but I promised to carry her if Wade gave chase.

I opened her door and helped her out of the car. “This is very bizarre, Alex,” she grumbled.

I had to agree. Hosting a baby shower at a winery seemed a little odd.

Traipsing around in stiletto heels and a tight fitting leopard print dress while heavily pregnant seemed odd too, but that’s the look Jasmine was working as she tottered across the car park with her arms outstretched.

Gabi expertly deflected her hug by using her belly as a shield.

Jasmine took a step back and looked Gabrielle up and down. “Geez, you’re getting big, aren’t you?”

I put a protective arm around Gabi. “You’re stretching those spots out quite nicely too, Jasmine,” I noted.

The Beautiful looked down at her belly before glaring back at me. “You should go inside, Alex,” she said. “Wade will be happy to see you.”

I shook my head, trying to look apologetic. “I’m sorry, but we’re not staying,” I told her. “We just came to give you this.”

Wade seemed to appear out of nowhere, just in time to grab the gift as I tried handing it to Jasmine. He held it to his ear and rattled it. “That’s very generous of you,” he said. “We’ve cleaned up pretty good as far as gifts go. Much better than the twins’ haul – and there were two of them.”

Gabrielle let out a little groan. As far as subtly goes, that’s as good as it gets for her.

I reached for her hand. “Well, we should be going,” I told them.

“Yes,” agreed Jasmine, shooting Gabi a look of pity. “Being that big must be awful. You must get so tired.”

I opened the passenger door of the car and practically forced Gabi in. “Take your wife back inside, Wade,” I urged. “For her own good.”

He answered me with a stiff nod, hooked his arm through Jasmine’s and led her away. “Let’s go, babes,” he urged. “You know how temper-mental Gabi can be.”

Gabrielle was still ranting when I slipped into the driver’s seat. “Temper-mental?” she grumbled. “That is not English. He does not know English.”

“Put your seatbelt on, Gabs,” I said dully.

“Temper-mental is not a word.”

I pulled her seatbelt across her belly and clicked it into place. “Can we go now, please?” I asked hopefully.

“No, Alex.” Gabi folded her arms as best she could. “Go back in there and tell him that temper-mental is not a word.”

I leaned across and planted a kiss on her cheek. “I love you. You drive me insane, but I love you.”

I turned the key in the ignition. “Especially because you’re fat and temper-mental.”

Her wonderful laugh filled the car and I knew that for now, the drama had passed. I understood Gabrielle’s epic mood swings perfectly. Being in control was important to her, and none of the changes going on in her body at that point were controllable. That meant she was constantly wound tighter than an eight day clock.

The baby wasn’t playing by her carefully set rules, which didn’t surprise me in the least. My children are rule breakers, even before they’re born.

Her organic diet plan went out the window in the second month when a relentless addiction to instant custard kicked in. Not even Gabi could see any benefit in eating organic vegetables when her main source of sustenance came from a box of custard powder. Her fitness regime fell apart too. Walking further than the letterbox was a major coup lately.

The one plan that did remain was her plans for the big day. I thought the whole notion of a written birth plan was ridiculous, but Gabrielle was insistent.

“No drugs,” she declared.

Reasoning with her was impossible, but I tried. “Gabs, you don’t know what you’re going to want when you’re doubled over in pain.”

She made a few adjustments to her written birth plan after that. As well as her ‘no drugs’ rule, ‘no pain’ was also added to the list.