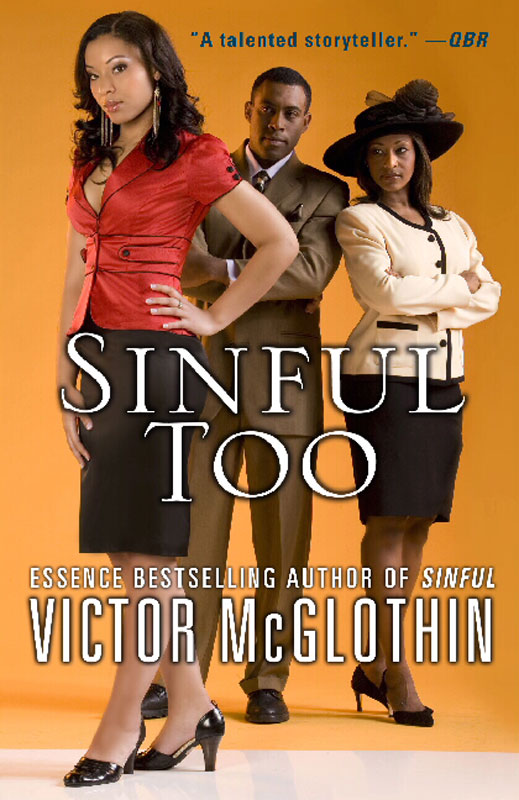 Three: He Wants Some

Seventeen: Too Many Husbands

Twenty-one: Silly of Me

Twenty-nine: Not Yet, I Don’t

Thirty-three: Everything and Nothing

“McGlothin creates a sizzling slice of life in 1947. [He] weaves convincing historical elements into a fast-moving caper.”

“Unforgettable . . . McGlothin has given
Autumn Leaves
a life of its own, with a compelling story line and a strong depiction of the trials and triumphs of interesting and appealing characters . . . He immediately draws the readers into the depths of his characters’ emotions.”

“An absolute page-turner . . . intriguing and thought-provoking.”

—KIMBERLA LAWSON ROBY, bestselling author of
Too Much of a Good Thing

WHAT’S A WOMAN TO DO?

“Engrossing and entertaining . . . The twists and surprises are both plausible and unbelievable.”

“A talented storyteller with a knack for telling a convincing story, McGlothin manages to weave an entertaining story that may indeed ring true to many readers . . . [a] new and refreshing voice in the world of contemporary African-American fiction.”

“Four stars . . . a superb, true-to-life book. With a masterfully created plot, it explores the turbulent lives of three courageous women . . . offers a gripping emotional glimpse into the dark world of the unknown.”

To every wife who has or will have to endure a cheating husband and
the other women.

D
ior followed two paces behind the grim-faced correctional officer who led her through the visitor’s gate of the Azalea Springs Federal Prison for women. Dior had been incarcerated before, though only briefly. The desperate claustrophobic and suffocating feelings always returned when she took the hour-long drive to see Billie Rae Wicker, her mother.

Dior refused to count the years they had been separated from each other. She’d spent too many of them hating Billie for not being there, for missing her sixteenth birthday and the first time she fell in love. It took a murder, the passing of Dior’s good friend, to prompt her initial trip to the prison camp fourteen months ago. Before Isis was killed in a sordid sexual relationship gone awry, Dior couldn’t see past her own pain to care about anyone else’s, including that of her mother, who had been locked away over ten years before receiving a visit from her daughter. Now, with four trips to Azalea Springs under her belt, Dior looked forward to reconnecting with the woman who birthed and raised her until age fifteen, when the U.S. Marshals came storming through their front door with search-and-arrest warrants to haul Billie Rae Wicker away. No amount of kicking, screaming, or crying was going to stop the men from incarcerating her. She couldn’t do a thing to defend herself once the officers found stacks of stolen food stamps, forged green cards, and hundreds of illegal credit cards issued to people who didn’t exist. It was peculiar how Dior had fallen prey to some of the same obstacles that had sent her mother down the wrong path. By her twenty-first birthday, Dior’s resentment had shifted from Billie’s absence to her having been caught. Carelessness and trust were the culprits Dior blamed for her mother’s arrest, reasoning that a more precise plan would have better served her efforts. She also grew to believe that every hustler had to stay on top of their game and keep an eye on their friends, especially when the money was rolling in. Dealing with slipups and snitches was merely the cost of doing business on the streets; even an upset ex-boyfriend’s brokenhearted rants to the cops should have been expected. Billie getting trapped by his betrayal and subsequently having to leave two teenage kids behind, due to her own carelessness, was inexcusable. Dior’s pain turned to pity when the unfortunate death of a friend proved that not everything that happened in life could be planned for or plotted against. At age twenty-six, she was forced to search her heart for forgiveness and then work on storing away the sadness and lost time where they belonged: in the past.

Inside prison, Billie kept a mental record of the birthdays, and missing out on their high school graduations and various other important coming-of-age events left an indelible mark on her heart. She imagined irreplaceable moments when her daughter and son might have needed guidance, direction, and discipline. Billie would never be able to forgive herself for not being there, even if she dared to try. Keeping track was a painful reminder that her schemes had not only landed her behind federal bars on a twelve-year stretch, but they also displaced her children from a home she’d built with ill-gotten gains but the best of intentions.

While sitting on a metal bench in the inmate waiting area, Billie ran her nervous hands down the creases of her neatly pressed khaki prison-issue uniform just as she did each time her children came to see about her. She inhaled heavily then closed her eyes.
I’ve missed the best parts of this child’s life
, she thought silently.
Ain’t nothing going to bring those years back to you. Telling yourself how bad you messed up won’t either. Pull yourself together, Billie Rae, and face this young lady you abandoned, the woman you hardly know.

“Inmate Wicker, B. R., move to the congregation room,” a man’s voice instructed.

Billie opened her eyes and shrugged on a smile from her iron perch. “Yes, sir,” she replied assuredly. “I’m moving.” She stood up, straightened the uniform, and then pulled back her long ponytail with outstretched fingers. She stepped into a twenty-by-twenty foot room. Everything was gray, cold, and hard. Metal tables and chairs were situated in three rows to facilitate meetings between the prisoners and their lawyers and loved ones. The walls were painted in a dreary, washed-out hue to match the monotonous décor. Billie was told which bench to take. She did as instructed, placing her thin forearms on the flat circular-shaped metal table, and exhaled just as profoundly as she’d inhaled in the other room. She finger-combed her hair again when she heard two sets of footsteps heading down the long cement corridor toward the visiting area. Billie’s heart fluttered when Dior traipsed into view behind a stoutly built officer. Despite her daughter’s expensive designer skirt-suit and Prada slingbacks, she still managed to see a child in the woman standing on the other side of the chain-link fence dividing them.

“Yes, sir,” she answered, in the standard protocol for speaking with COs. “I remember.” The gate slid open. Officers stood on either side of it, and two more lorded over the room itself to assure no illegal contraband passed and no rules were broken. There were many rules. No physical contact during visitation was the most hated of all.

The sweet aroma of Dior’s perfume filled Billie’s thin nostrils as she approached the table allotted to them. Billie looked her daughter up and down, proudly. Dior’s hair was shoulder-length, thick, and shiny. Her makeup was applied lightly, not overdone. Billie smiled at how nicely it complemented her cinnamon-brown complexion and sharp features. She also noted how Dior’s taste for clothing seemed to mature with every visit. Her edgy, painted-on jeans and revealing blouses had been upgraded to stylish ensembles. “Hey, Dior,” she sang quietly, wanting to reach out and secure a warm embrace. “You look good, baby girl. I don’t know if I’d have gone with plaid but it suits you. You look like a million.”

“You too, Billie Rae,” Dior said eventually, using the same subdued tone she’d been met with. She tried not to stare at her mother’s hair, in desperate need of a relaxer, or the tired eyes residing beneath it. Billie would have easily been considered a stunner on the outside. Her angular face, high cheekbones, and evenly tanned skin made her appear younger than forty-three except for the despair her eyes couldn’t conceal. Her plight was made evident in the slightly noticeable wrinkles that had begun to gather there.

As she took her seat across from Dior, Billie smiled big and bright to fight off the embarrassment of a subtle insult. “Oomph, for once couldn’t you call me Mama, or are you too grown for that now?” She glanced at Dior’s manicured nails, then slowly balled her fist to hide her ragged fingertips. “You do look it, but dressing the part doesn’t necessarily make it so.”

Seeing where this was going, Dior decided to get there first. Billie had an annoying habit of being overly critical, about everything from clothing to the way Dior held her mouth when she was upset. Staying ahead of her mother’s nit-picking had gotten to be a chore, one she’d rather do without. “Well, since you brought it up,
Billie
, I do have a job, a house, my own car, and I’m paying all of my own bills. If that ain’t grown, I don’t know what is.” Dior neglected to mention how she was running a welfare housing scam in order to live in her twin brother’s Section 8 property, where he was paid two thousand dollars a month by the government for renting it out to an underprivileged family. Dior also left out the arrangement she had with the clothing store owner Giorgio, who paid her under the table in cash for sales and sex on the side. Oddly enough, Billie would have been excited and saddened simultaneously had she been apprised of Dior’s street savvy and skillful knack for making ends meet without breaking a sweat.

“Yeah, you’ve got a point, Dior. You have grown a lot while I’ve been locked up here. I’m sorry for missing out on your and Dooney’s —”

“Don’t do this to me, Billie Rae,” Dior interrupted sharply and louder than she meant to. “Don’t lay your guilt on me every time I come up here to see you. What’s done is done. Ain’t that what you used to tell me when I cried my eyes out writing those letters begging you to come home? You can save the history lesson. I don’t want it.”

Taken aback, Billie smiled anxiously. She realized she was the mother in theory only, and it hurt. “Okay, I see. But what you can’t discount is the truth. You know that brother of yours, that boy is doing alright for himself too. He had that case hanging over him but he got up and dusted himself off pretty good. With that boy owning a legit business, the building it’s in, and five houses, it seems the best thing could have happened to y’all is this happening to me.” Her worried smile fell flat when she saw Dior’s cheeks drawing in tighter, like they had when she was a child. “Uh-oh, I recognize that look,” Billie said, ill-advisedly. “You used to carry that same smirk when I’d make you wash the dishes or get off the telephone when you didn’t want to.”

PINNACLE BOOKS NEW YORK by Unknown
Swell by Rieman Duck, Julie
I Heart Me by David Hamilton
The Long Midnight Of Barney Thomson by Douglas Lindsay
Brave New World Revisited by Aldous Huxley
Nightlife by Thomas Perry
Meet Me at the Morgue by Ross Macdonald
Dragon Blood 3: Surety by Avril Sabine
13 Is the New 18 by Beth J. Harpaz
Amber to Ashes (The Torn Heart #1) by Gail McHugh