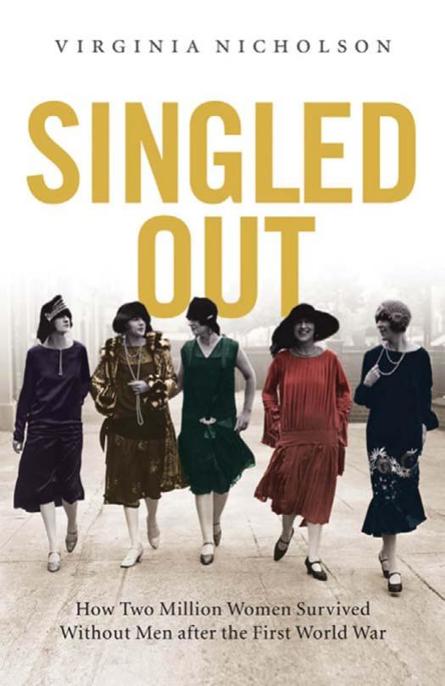 in research, scholarship, and education.

 Where Have All the Young Men Gone?

The crown and joy

A world without men

 ‘A world that doesn’t want me’

Destiny and the devil

The more of us the merrier

 On the Shelf

‘But who will give me my children?’

Miss All-Alone in the classroom

Miss All-Alone on the wards

The blessed fact of loving

A cause, a purpose and a passion

Finding happiness as a ‘bach’

 The Magnificent Regiment of Women

The challenge of loss

We are not downhearted

. New women on bicycles (from Ruth Adam,
A Woman’s Place
) . Winifred Holtby and other Somerville students in  (from Marion Shaw,
The Clear Stream
)

(Courtesy The Principal and Fellows of Somerville College, Oxford) . and . Celebrating physical vigour, the Women’s League of Health and Beauty may not have done much to comfort men scarred and crippled by a remorseless conflict (
Top
, from Mary Turner,
The Women’s Century
;
bottom
, Imperial War Museum) . Richmal Crompton: ‘the last surviving example of the Victorian professional aunt’ (from Mary Cadogan,
Richmal Crompton – The Woman Behind William
) . Society belle Isie Russell-Stevenson (Courtesy Julian Fellowes) . Rani Cartwright, a celebrated catwalk model who described herself as ‘free range’ (Courtesy Rani Cartwright) . Joan Evans lost the man she loved in , and by the age of twenty-two had given up hope of marriage (from her autobiography,
Prelude and Fugue
) . Cicely Hamilton lived ‘like the traditional spinster, with a cat for company’

. The staff of the Electrical Association for Women honour their founder Caroline Haslett, awarded the DBE in June  (Courtesy Institution of Engineering and Technology Archives)

Illustrations in the Text

p.  Illustration to an article on nursing in
What Shall I Be? A Book of Careers
, ed. Jocelyn Oliver, 

p.  Title page of Marie Stopes,
Married Love
,  (Wellcome Institute Library) p.  ‘Will You or Won’t You?’, illustration by Cipe´ Pineles in Marjorie Hillis,
Live Alone and Like It
, 

p.  ‘William was left alone to escort Aunt Jane through the mazes of the land of pleasure’, illustration by Thomas Henry in Richmal Crompton,
William the
Fourth
, 

p.  Illustration to ‘Aviation – a career for girls’, in
What Shall I Be? A Book of
Careers
, ed. Jocelyn Oliver, 

p.  ‘Have
You
Discovered Electricity?’, an advertisement in
The Electrical Journal
of June 

The First World War deprived Britain of nearly three-quarters of a million soldiers, slaughtered on the Western Front and elsewhere. They were known as ‘the Flower of Europe’, ‘the Flowers of the Forest’, and ‘the Lost Generation’. Many of them left behind widows and orphans, but enormous numbers of these young men were unmarried when they died. Their deaths bereaved another generation: the thousands of women born, like them, between  and , who unquestioningly believed marriage to be their birthright, only to have it snatched from them by four of the bloodiest years in human history.

Those women started to die off in the s and s, and now there are few left, but anyone today over the age of thirty or forty will remember them. In the s when the phenomenon first arose they were known collectively as the Surplus Women, and according to the  Census there were one and three-quarter million of them. I remember as a child in suburban Leeds our neighbour was one of these spinsters. Miss Pease was diminutive and self-effacing; she lived a blamelessly meek and solitary existence in a humble stone terrace house with a cat, a cottage piano and an outside lavatory. Though you couldn’t pigeonhole them, these women were somehow both valiant and incongruous. Unasked questions hovered around them. Why didn’t they ever marry? Did they mind? Did they harbour secret sadness? What did they do about the lack of love in their lives, and the lack of sex? Did they care that they had never had children?

Caveat Emptor and Other Stories by Joan Hess
My Other Daddy the Complete Series by Carl East
htm Hybrid Misfit by Unknown
Murder and Salutations by Elizabeth Bright
Revenge Wears Rubies by Bernard, Renee
Blood Fire by Sharon Page
Velvet Underground&#39;s The Velvet Underground and Nico by Harvard, Joe
Ritual in the Dark by Colin Wilson
The Honeymoon by Dinitia Smith
Lipstick & Stilettos by Young, Tarra