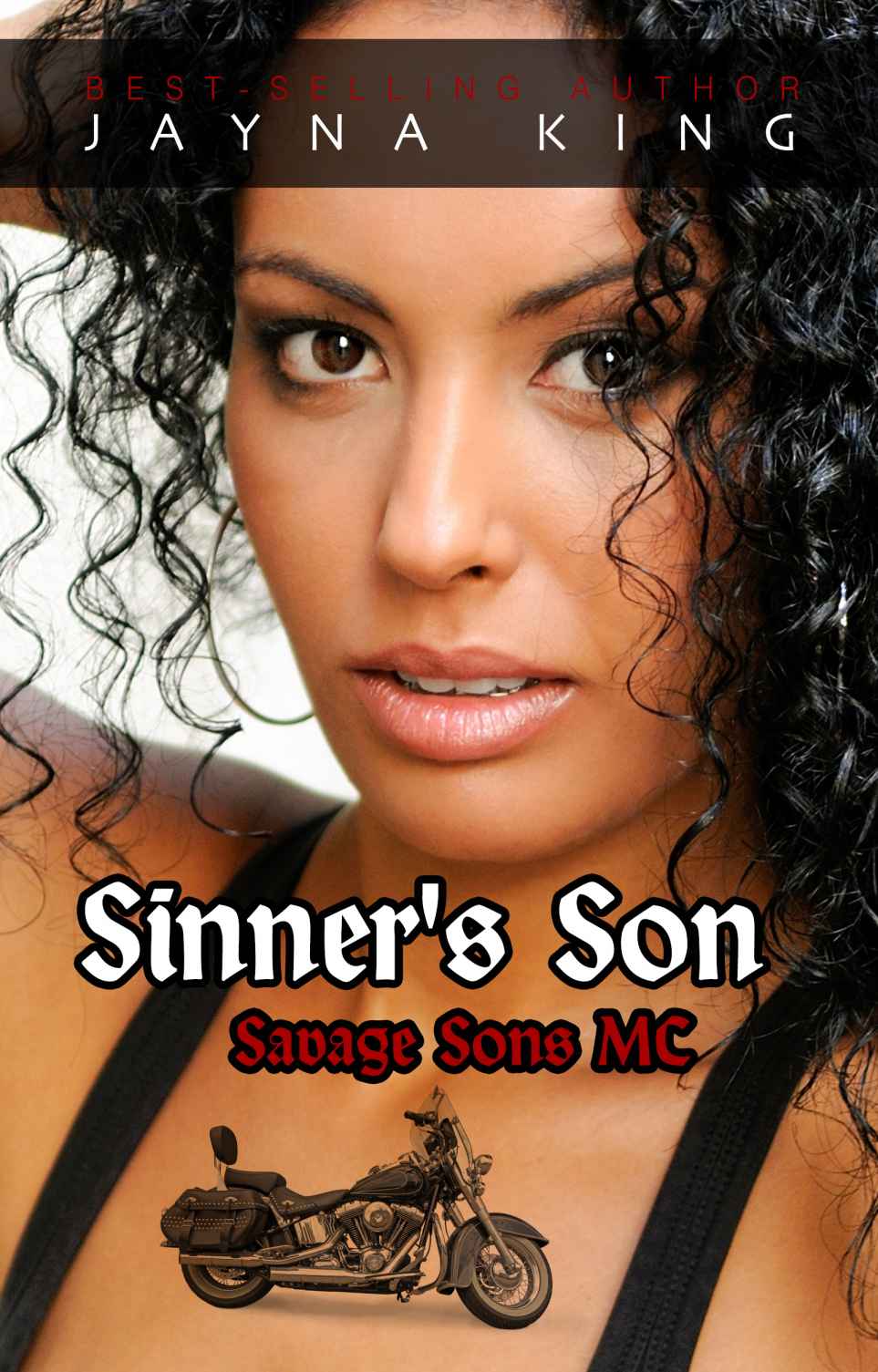 Troubled Son
Prodigal Son
Freedom's Son
Sinner's Son
Sinner's Son. 1st Edition
Copyright © 2014 Jayna King
All Rights Reserved
This book is a work of fiction. References to real people, events, establishments, organizations, or locations are intended only to provide a sense of authenticity, and are used fictitiously.
All other characters, and all incidents and dialogue, are drawn from the author's imagination and are not to be construed as real.
Table of Contents

K
ate Tanner looked at her reflection while she brushed her teeth. The dark circles under her eyes were a clear reminder of how little sleep she'd gotten the night before, and she knew that she was looking at another long day. She knew that she should be pleased about the arrest of Daniel Hall, the president of the Savage Sons, but she couldn't help feeling like there was more going on than she knew about, and that feeling made her very uncomfortable.

Tanner was a matter-of-fact, organized, thorough agent, and while her tenure in the FBI hadn't been particularly remarkable, it had been without blemish. She was good and she knew it. While she was proud of the work that she did, though, she couldn't help craving a little more -- that one case that would set her apart from her peers -- and maybe even result in a little publicity.

She wasn't exactly sure why, but she had a feeling about Luke Callaway and the Savage Sons. Tanner used the hairbrush to neatly arrange her hair into a low ponytail. She knew that there was more going on with her informant than he was telling her. If pressed, Tanner would have admitted to liking Luke Callaway, but the fact that he seemed to be a decent guy wasn't going to stop her from extracting every piece of information that she could.

After putting on a little makeup that mostly concealed the dark circles under her eyes and made her look a little less tired, Kate stood in front of her closet and pulled out the most comfortable of her suits. If she had to spend the day wading through the fallout of Daniel's arrest and the constant requests from her supervisor for more and more results, she could at least be comfortable. As she buttoned the lightweight gray jacket, she reflected -- not for the first time -- on why she'd gotten so emotionally involved with this case.

Kate knew why, of course. The memories of her mother, grieving for the death of Kate's father and feeling overwhelmed by the demands of raising two daughters all alone, were ones that Kate could never banish from her mind. Kate had been too young to notice exactly when her mother's behavior had changed, but by the time Kate was fourteen and her sister twelve, Kate's mother had pretty much checked out. There was a string of men who'd visit, and most days the woman who was supposed to be holding the remnants of their little family together didn't even get out of bed until the girls had gotten home from school.

Though Kate couldn't ever be sure what drugs her mother was using, what precisely she used to numb the pain and hopelessness she felt as a widowed mother of two, Kate knew that the men, often rough and poorly-educated, had to have some kind of hold over her mother in order to get attention from the woman who'd met Kate's father in college and who'd left her promising career to stay home with her two girls. She wasn't the same person, and Kate had always known that her decision to enter the FBI had been colored by her desire to do whatever she could to keep other women from ending up like her mother had.

The ring of her cell phone startled Kate from her bittersweet memories.

"Tanner," she answered, without ceremony.

"Thanks so much for getting back to me. I know that you're long-removed from this case, and I appreciate your taking time out of your schedule to get back to me."

"Certainly. Before I left the FBI, we spent a long time going over all of the details of the case, though, and I doubt that we left any stone unturned. I don't know that I'll have any way of helping you, but you sounded a little desperate."

"I guess I am a little desperate, now that you mention it. We've managed to get another of the Savage Sons to work as an informant for us. He's given us some good intel, and we've made one significant arrest. I can't help feeling like there's something we're missing, though. Something more in the big picture that we're not seeing."

"Can I ask who's working with you? The Sons are so insular that I'm surprised and impressed that you found someone to lean on."

Kate thought for a minute and decided that there wasn't any harm in revealing her informant to Max. "It's Luke Callaway. He ended up in jail because of some bullshit fight over a girl, and we used the threat of prosecution to twist his arm."

"I don't know a Luke Callaway."

"Oh, that's right. You wouldn't know him. He showed up not long after ... well, after your part of the case ended. He's Daniel and Sable Hall's son. They gave him up for adoption after his birth, and he showed up in town looking for his birth parents."

"Wow. That must have shaken things up."

"Yeah. So Luke gave us Daniel, and we have him in custody. Arrested him yesterday, and we're going to charge him for a massive pot buy from a cartel in Mexico, as well as for the assault of a Denver man who crossed the Sons without realizing what Daniel's vengeance would look like. Daniel nearly beat the man to death in front of his kids, and Luke witnessed it."

"Joker did all that? Granted, I didn't know him very well, but I never saw the violent side of him."

"From what Luke has told us, there's an evil streak in his old man. I can tell that there's more going on than he's telling us, but I can't figure out what it is."

"You know about all of the meth labs, right? And the girls?"

Kate sighed. "Well, here's the thing: as far as we can tell, the Sons have completely gotten out of the meth business. I can't see a good reason for Luke to lie about that since he wasn't involved while Moses was alive, and he's told us that in the wake of Tombley and Moses' deaths, the Sons were afraid -- rightly -- of continuing to cook and deal meth."

"So they're out of the meth trade altogether?"

Kate sighed again. "You sound like Celeste. I just have this feeling that there's something more. Something that Luke's hiding from me."

"If I could tell you anything, I would. The whole case was a nightmare, and I've worked hard to put it behind me and move on, but I really did give every scrap of information that I had to the investigators who were working on cleaning up my mess. I don't have anything else for you."

"I understand. I hope you've moved on to bigger and better things."

On the other end of the line, Max ran her hand over the curve of her abdomen, swelling each day with the child she carried -- something she hadn't felt like the FBI needed to know. "I have indeed."

"Well, I guess I should let you go," Kate said. "At the risk of sounding cliché, will you call me if you think of anything that could help."

"Of course. And Agent Tanner?"

"I'll give you a piece of advice, and you can heed it or ignore it as you wish. Everyone tells you that you should keep your distance from the people you're investigating. Stay professional. Don't look for ways that you can identify with the bad guys you put away. I'm going to tell you something different. You're doing important work, and the world's a better place because you put people in prison. But don't force yourself to see the ancillary folks in your investigations as something less than human. There's an awful lot of gray in the world, and if you resist the temptation to sort folks into black and white boxes, you'll find that sometimes the people who operate just outside the law have their reasons. I'm not saying that you should stop the relentless pursuit of people who belong in prison. I'm just saying that not all outlaws are without honor."

Kate didn't say anything for a moment. "I'm surprised to hear you say that, Maxwell. After the way your career in the FBI ended, I'm surprised that you wouldn't be warning me off of any connection with members of the MC."

"I hear you," Max laughed. "And believe me, there are some days where regret colors everything I do. But when I look back on the brief time I spent on that case, I realize that not everything that came out of it was negative. I'm a different person, and that's not entirely a bad thing."

Kate was perplexed, not really sure how to respond to Max's advice, and she looked at her alarm clock and realized that she needed to get on the road. "Well, thanks for the advice ... I think. I hope you're doing well, and that you'll let me know if anything occurs to you."

"Will do, and good luck with the case, Agent Tanner."

Kate hung up the phone, shaking her head. "What the hell was that?" she said to the empty room.

As Kate drove to the building that housed the DEA's office in Denver to meet with Mark Singer, she knew that one of her primary concerns -- in addition with making sure that her case against Daniel Hall was airtight -- was going to be keeping Luke Callaway alive. When Nate had walked out and overheard Kate and Luke's conversation and realized that Luke had betrayed his father, he'd only thinly veiled his threat to kill the rat in the Sons. Callaway's safety was one of the first items on the agenda of things Tanner and Singer had to review in their meeting.

"Coffee?" Singer asked when Kate sat down in his office.

Singer returned with the coffee, having spent long enough working with Kate to know that she took her coffee with cream, no sugar. "So where do you want to start?" he asked, settling down at his desk with his own much-needed caffeine.

Aftermath (Invasion of the Dead) - Part I by Baillie, Owen
The Abandoned Bride by Edith Layton
All New People by Zach Braff
Collingsworth by Andy Eisenberg
Rain Village by Carolyn Turgeon
GONE - Part Three (The GONE Series Book 3) by Bladon, Deborah
The Book of Evidence by John Banville
The Tail of the Tip-Off by Rita Mae Brown
What a Ghoul Wants by Victoria Laurie
Land of No Rain by Amjad Nasser