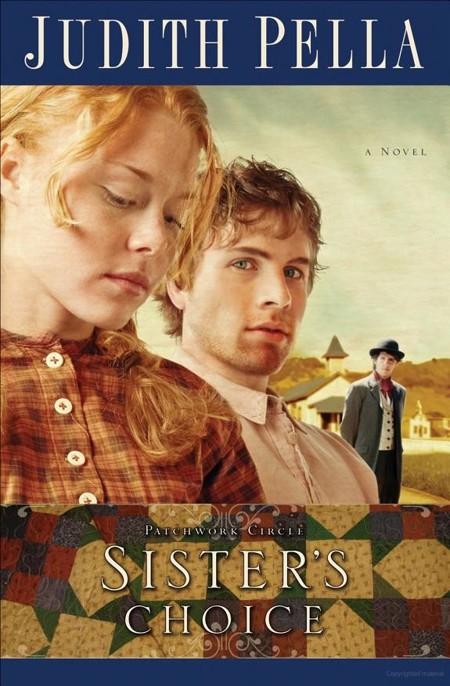 This is dedicated to my small
quilt groups who bring me
laughter, inspiration, therapy,
and wonderful friendships.
Thanks to each of you!

J
UDITH PELLA has been writing for the inspirational market for over twenty years and is the author of more than thirty novels, most in the historical fiction genre. Her recent novel
Mark of the Cross
and her extraordinary four-book
D
AUGHTERS OF
F
ORTUNE series showcase her skills as a historian as well as a storyteller. Her degrees in teaching and nursing lend depth to her tales, which span a variety of settings. Pella and her husband make their home in Oregon.

Maggie Newcomb stood on the front porch of her house gazing idly into the yard. The day was sunny with some dots of white clouds in the blue late August sky. Dad said it might rain later in the week to usher in September, but now summer was holding on nicely.

Maggie sighed as she peered across the yard and down the road. She felt as if she were looking for something but couldn’t think what. Surely not for the guests to arrive for Mama’s quilting bee. She’d hardly noticed the two quilt frames set up in the yard. No, she really wasn’t anticipating the gathering. And it wasn’t because she was jealous of her sister, Ellie, for whom Mama had arranged this bee so they could finish her twelve wedding quilts.

Maggie did feel blue, but she was sure it wasn’t because of the quilting party for Ellie or because her sister was engaged to be married to a handsome, wonderful man. Maggie didn’t want her sister’s quilts, or her man—though Maggie had in fact proposed marriage to that very man, to Zack Hartley, but that was when he had been the minister William Locklin. In truth, Maggie hadn’t wanted him even then. She’d just been stupid and silly, wanting to get back at everyone who thought she was too young and too immature to snag the much-sought-after new minister. All she had ended up proving was just how right they were. She had been childish and immature. Maybe she still was a little, but in the last weeks since all the upsetting events, she had changed some—for the good, she believed.

The cause of her present melancholy wasn’t jealousy. It was . . .

She couldn’t pinpoint the exact cause. She felt as if she were floating around aimlessly in a fog. Everyone else seemed to have a purpose in life. They were moving ahead to exciting futures. Well, at least Ellie and Zack knew where they were going, and so did her older brother, Boyd, who would marry in October after he finished the season in the lumber camp where he worked. Her younger brother, Georgie, had school to look forward to, even if he didn’t always like it. They all had a reason to get up in the morning: wedding plans, new home plans, even schoolwork.

All Maggie seemed to have were chores. Was she just bored, then? Did she merely want some excitement? No, she simply wanted to know that there was more ahead for her than mucking out the barn or helping Mama peel potatoes or hang laundry. She had recently turned eighteen; surely there was more out there for her to look forward to.

“Come on, now. Everyone will be here soon.”

Maggie gave another long-suffering sigh and turned toward the house.

Mama was standing in the doorway with an armload of quilts. She and Ellie and even Maggie had been hard at work getting Ellie’s quilt tops ready for the quilting. Mama and Ellie had marked four or five of the quilts, as that’s all there had been time for. Then these had been sandwiched with wadding and backing and basted—this is what Maggie had helped with. Some of the ladies would work on marking the other quilts while the marked ones were being quilted. Maggie, of course, hadn’t been involved in the marking, for marking the quilting patterns was exacting work, far above her meager skills.

“Take these and set them carefully on the blanket I spread out by the frames,” Mama said.

Ellie had twelve quilt tops ready to be quilted. Maggie could not imagine the women finishing them all today. If they just finished the five that were basted, that would be something. Mama said when she was a girl she had been to quilting bees where it was common for all twelve to be done in a day. But there might be three or four frames set up and twice as many ladies stitching. There were nine members of Mama’s Sewing Circle; however, a few extras would come today, including some of the older daughters of the Circle women, some of the very girls who had vied with Ellie for Zack. There were no hard feelings among the girls, especially since it turned out Zack hadn’t been a real minister. Ellie was the only one who had fallen in love with the
man
, not the “office.”

Maggie set the quilts where instructed and then returned to the house. Ellie was slicing the bread Mama had spent two days baking. All the women would be contributing food, but Mama felt, as hostess, she had to make sure there was enough, since both lunch and supper would be served. The menfolk had been invited to join the ladies for supper. Lewis Arlington and Kurt and Clyde Lambert might even bring their instruments to provide music for dancing later.

“Ellie, why don’t you let me finish the bread,” Maggie offered, “so you can get started loading your quilts onto the frames.”

Mama and Ellie both started at Maggie’s suggestion, and her cheeks suddenly heated.

“Well, I can be helpful once in a while,” she added defensively.

She could see both Mama and Ellie were suddenly embarrassed at being caught with their surprised expressions.

“It would speed things along if the first two quilts were loaded,” Ellie suggested.

“And that’s best left to you,” said Maggie. “I’m far better at slicing bread.” She nudged her sister away from the cutting board and slipped the knife from her hand.

“Thank you, Maggie. But you are going to do some quilting today, aren’t you?”

“You don’t want my toenail catchers in your beautiful quilts.”

“Of course Maggie will add some quilting!” Mama spoke up. “I’ll help her, and her work will look fine.”

As the back door shut behind Ellie, Maggie bit her lip to keep from groaning, or worse, from spouting a cross retort. All she needed was to be the only one getting quilting lessons like a child. That’s what nearly got her into trouble with Zack. Why couldn’t she be equal with the women, or at least with those her own age?

The answer was clear. They were all skilled stitchers, and she wasn’t. Since she could never measure up, she would always be inferior. No one seemed to care much about her other talents. Why, she was good at—

What was she good at? As she sliced the bread she searched in her mind for her accomplishments and came up quite blank. In school she’d always been good at arithmetic, but no one cared if a girl was good at that. What else? She could ride, but so could Ellie. She could fish, but even Ellie could learn to fish if she put her mind to it.

Let’s face it, Maggie, you have no real talents. You are just a big lump.

“Ow!” she cried suddenly. Because she hadn’t been paying attention to her work, the knife came down and nicked her finger instead of the bread. She thrust her wounded finger into her mouth.

“Oh, Maggie, what have you done?” exclaimed Mama.

“Nothing!” Maggie retorted angrily. “I can’t do anything! I am just a . . . lump.” Her voice caught on the final word, and to her surprise tears sprang to her eyes.

Montana Hero by Debra Salonen
The Watchman by Davis Grubb
Seduced in Sand by Nikki Duncan
atta girl: Tales from a Life in the Trenches of Show Business by Peggy Pope
Try and Play Me, Boy (The Playgirls #2) by May Sage
Flight Dreams by Michael Craft
Dead in the Dog by Bernard Knight
Breaking the Bank by Yona Zeldis McDonough
Without a Trace by Lesley Pearse
Altered by Gennifer Albin