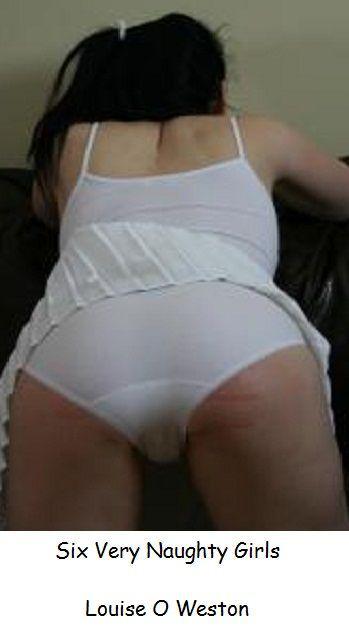 Helen Gets the Slipper

Helen
Gets the Slipper

"Come on,
Helen
! You know we need you for the team!" Jenny Wright, Helen Robson's best friend, spoke in her most persuasive tones.

Juli
e
W
atson
, who had less patience than Jenny with Helen, chimed in "And, anyway, Helen, there's nothing special about that bottom of yours! We've all had the slipper!" There was a chorus of agreement.

"You're being selfish, Helen, why shouldn't you get the slipper like anyone else?"

The eighteen year old Helen had been expecting sympathy from her friends. After all she'd only been out of bounds so as to buy food for a midnight feast when everybody could join in. She had told the other girls what had happened. She had been caught in the village by Miss
Carter
, who had escorted her straight back to the headmistress, Miss Masters.

It had been the first time Helen had ever been to the headmistress's study. The tall eighteen year old had started to cry quietly to herself as Miss Masters had given her a real talking to, culminating the tongue-lashing by awarding the naughty schoolgirl 500 lines to be handed in a week's time and three hours supervised detention for the next afternoon. Saturday was a half day at the school.

Helen had never been in serious trouble before and had never had to do more than 50 lines at a time. She knew that the enormous imposition would take up all of her leisure time for the next week. But it was the detention which worried her more. The school was playing an important netball match tomorrow and she was in the team. Tearfully, she had asked Miss Masters if her detention might be postponed. The headmistress had refused.

Finally she had offered Helen one alternative. If the schoolgirl would accept a
slippering
the detention would be reduced to one hour and would take place on Monday afternoon. Her lines, too, would be reduced to 200. Helen had refused. But now all her friends were angry with her and were telling her that she'd made the wrong choice and had let the side down.

"If I'd been given the choice of the slipper, the last time I was sent to Miss Masters, I'd have taken it!" said Claire, a small but well-developed blonde girl. There were a few laughs. The last time Claire had been sent to Miss Masters she had been caned! The girls all remembered how Claire had had to stand up in all her classes for the rest of that day. No doubt she would have been grateful for the option of a
slippering
!

Claire was the only girl in their year who had had the cane, and after seeing her reactions the others would do their best to avoid it; but they had all, except for Helen, had the slipper either at home or at school and they felt that she was acting like a spoiled little doll in turning down her one chance to play in the match. Even Jenny had received her own first
slippering
just the week before.

"Oh! Helen!" said Jenny, "It's horrid getting the slipper, of course it is, but it's over in a couple of minutes. You know I got the slipper last week from Miss
Carter
and I hated it. But ten minutes afterwards it was all over and forgotten. If you go back to Miss
Masters
now and tell her that you've
changed your mind and that you'll take the
slippering
you'll have forgotten all about it by the time of the match tomorrow. Did she tell you how many whacks you would get?"

"Twelve, over my knickers," said Helen quietly, blushing and lowering her eyes.

"There! That's not so bad!" said Jenny - rather hypocritically as her own
slippering
had been six whacks over her school skirt. "Come on! Go and see her and get it over!"

Helen looked at her friends. She was always easily influenced, but she was really scared at the prospect of bending down, revealing her teenage
knicker
-clad bottom to the eyes of her angry headmistress. And then - it would hurt! Helen had never been spanked and she was a physical coward. She knew that Miss
Masters
hit a lot harder than Miss
Carter
- whatever Jenny said.

The tall girl's hands went subconsciously to the seat of her blue school skirt as she tried to make her mind up. She chewed her lower lip nervously, her pretty schoolgirl face a picture of indecision.

But Helen had a desperate need to be liked. She could not stand the condemnation of her friends.

There was a chorus of thanks and good wishes. Helen walked off slowly, perhaps hoping that Jenny would say it had only been a test and that they didn't want her to go through with it after all.

But there was no recall and Helen walked slowly down the empty corridors to the headmistress's study. She paused outside the door. Again her hands went to the seat of her skirt and she rubbed the blue material gently. She was wondering what her bottom would be feeling like in a quarter of an hour's time. She tried to mentally prepare herself before knocking on the door.

Helen resolved that she would take her punishment with dignity. She had broken the rules of the school, she had been caught and now she would pay the penalty. She would accept it with dignity like the great heroines of history - Boadicea, Anne Boleyn and Mary, Queen of Scots. But it was such an undignified punishment! Well! She had to go through with it now. She knocked on the door.

Helen walked in and closed the door after her. She stood silent in the presence of the headmistress.

"Oh, you will, will you? Well, that option's not available any more. You turned it down. You will go into detention at 2 o'clock tomorrow afternoon."

Helen was thunderstruck. After all her fears and all her resolutions she wasn't going to be
slippered
after all! Her friends would never believe her - they would think that she'd chickened out again. She just stood there, but tears started to fall from her large blue eyes. Either Miss
Masters
had pity on her or, possibly, she was following a prepared path:

"Very well, Helen. If you are really so important to the school netball team I shall not be unreasonable. Your detention will be reduced to one hour and transferred to Monday and you will
take a
slippering
. But you have messed me around and your change of mind will cost another six whacks. It will now be eighteen whacks! What do you say, girl?"

"Yes, miss, I'll take the
slippering
", Helen mumbled, "thank you, miss!" She felt that she now had no choice. She would probably have agreed if Miss
Masters
had told her that she would be caned!

Miss
Masters
smiled, grimly. "The only reason for the alteration in your punishment is the netball match. Well, young lady, you may play if you will - but with fresh red slipper marks on your naughty bottom cheeks!"

"Helen! You don't learn your lessons, do you? I'm only doing this as a concession to you! But you still argue! Well then, you can report here at 2 o'clock, not at quarter to three, and in full kit, remember!"

This time Helen didn't argue. She just turned around and left the room.

When she rejoined her friends Helen's dismal appearance led them to conclude that she'd already had her
slippering
.

Jenny tried to be sympathetic: "I bet you're still sore,
Helen
! Do you want me to rub some cream on you - it'll stop the stinging."

But Helen broke down in tears and told them what had happened. They comforted her and were sympathetic, but there was some
pleasure derived at the
at the thought of the spoiled goody-goody getting eighteen whacks from the headmistress's slipper. Only a few girls, such as Claire, had taken that many strokes from Miss
Masters
and she still remembered how much that had bloody well hurt!

The next day, in morning school, Helen was aware of how the other girls were gossiping and giggling about her. She tried to keep a stiff upper lip, but it was hard. The news was now all over the school and at break time girls came up to her offering her a cushion to sit on and teasing her by imitating the whacking sound of a slipper landing on her knickers. Her friends did their best to support her, but time after time she felt her hands stealing towards her bottom in anxious anticipation.

She had to leave her friends before the end of lunchtime to go to the changing rooms. Miss Atkins, the Sports mistress was there. She knew why Helen was changing early and was sympathetic, up to a point:

"I'm sorry, Helen, but it is your fault, you know. I've never known Miss
Masters
to punish a girl who didn't deserve it. And playing netball afterwards is probably the best thing to take your mind off the sting. It's going to hurt, but you'll get over it, you'll live. I got the slipper - and the cane - at school
when I was your age, so I do know what I'm talking about, dear, the important thing is to learn a lesson from this."

Helen was pleased to escape from the well meaning reminiscences as soon as she was changed. She walked to the headmistress's office. It was just before two. She knocked and went in.

The headmistress checked that Helen was wearing full netball kit and then told her to stand in a corner of the room, facing the walls. Helen had to put her hands on her head. She felt the headmistress lean down and pick up the hem of her short netball skirt. She lifted it and pinned it to Helen's white top. Now the schoolgirl's maroon knickers were on full view.

"You will stay there like that until I say otherwise! I intend to slipper you at the time I originally set, a quarter to three, just before the start of the match."

Helen felt that she was blushing and pushed her face as far as possible into the corner. At least no
body
but the headmistress was witnessing her humiliation. Then there came a timid knock at the door.

Suddenly Helen remembered something she had forgotten. Saturday afternoon at two o'clock, when school had finished for the week, was a common time for girls to be sent to the headmistress for punishment!

Big Stone Gap by Adriana Trigiani
Southern Comfort (9781622863747) by Skyy
The Source: Book III of the Holding Kate Series by Cole, LaDonna
The Made Marriage by Henrietta Reid
CANCER'S CAUSE, CANCER'S CURE by Morton Walker, DPM
The Only Words That Are Worth Remembering by Jeffrey Rotter
Byzantine Heartbreak by Tracy Cooper-Posey
The Assassin Princess (Lamb & Castle Book 2) by J.M. Sanford
Nanny Piggins and the Rival Ringmaster by R. A. Spratt
A Victorian New York Romance by Celeste Rane