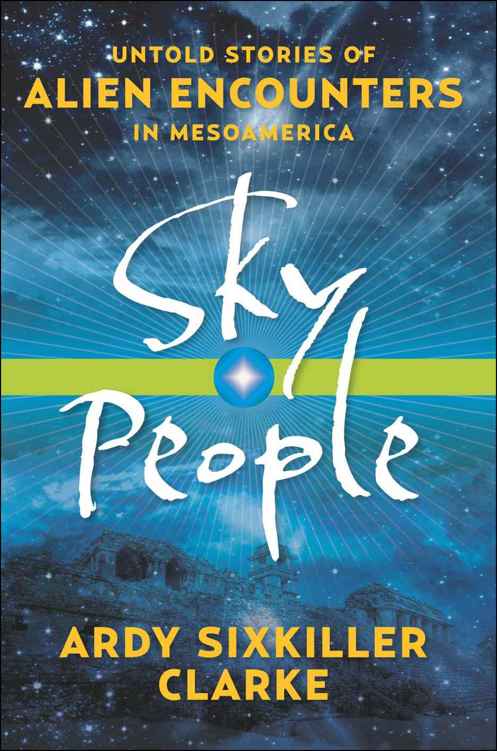 U
NTOLD
S
TORIES OF

All rights reserved under the Pan-American and International Copyright Conventions. This book may not be reproduced, in whole or in part, in any form or by any means electronic or mechanical, including photocopying, recording, or by any information storage and retrieval system now known or hereafter invented, without written permission from the publisher, The Career Press.

To order this title, please call toll-free 1-800-CAREER-1 (NJ and Canada: 201848-0310) to order using VISA or MasterCard, or for further information on books from Career Press.

This book is for my nieces: Tashina Loud Hawk, Wani Loud Hawk, Taspan Loud Hawk, and Cree Dawn Iron Cloud; and for my nephews: Can Sa Sa Two Eagle, Misun Bowker, and Jake Iron Cloud. May they always follow their dreams.

And for my husband, Kip, who shares my dreams.

I wish to acknowledge the tireless, intrepid, and faithful drivers, guides, and interpreters who walked with me on my journey through Mesoamerica; the indigenous people of Belize, Honduras, Guatemala, and Mexico, who shared with me their encounters with UFOs, Sky People, and Aliens; and the memory of John L. Stephens and Frederick Catherwood, who inspired a teenage girl to eventually follow her dreams.

I wish to thank Carla Moretti. She was my friend, my sister, and my confidant throughout this process. Thanks also go to Seth Hartman, Maurice Horn, and Jerry Brunt who made suggestions along the way.

Last, but not least, I want to thank Joan O’Brien and Randy Radke for their undying support and friendship. Together, we are
Los Tres Amigos
.

Part I:
Walking With the Ancients: Exploring Belize

Chapter 2: A Double on Another Planet

Chapter 3: A Disk in the Sky

Chapter 4: Men Who Walked Through Mountains

Chapter 7: The Stone Woman of Belize

Chapter 8: A Hole Through the Heart

Chapter 9: The Silver Man From the Stars

Chapter 10: An Encounter With the Old Ones

Chapter 11: The Devil Sent Them

Chapter 12: We Knew Our Way Around the Universe

Chapter 14: The Sky Men of Quiriguá

Chapter 15: We Had Our Own Gods

Chapter 17: They Are Poison

Chapter 19: The Shining People of the Red Hand

Chapter 20: They Told Me I Would Not Remember

Chapter 21: A City That Touches the Sky

Chapter 23: The Star Men of the Guatemalan Jungle

Chapter 24: In the Land of the
Tuhohani

Chapter 25: Sky Gods in the Heart of the Chiapas

Chapter 26: Our Elders Were Friends With the Wise Men

Chapter 27: The Place of the Gods

Chapter 28: He Came on a Beam of Light

Chapter 29: No One Believes the Truth

Chapter 30: On My Way to Heaven

Chapter 31: The Dog That No Longer Barks

Chapter 33: The Secrets of Palenque

Chapter 34: They Walk Among Us

Chapter 36: They Live Under the Sea

Chapter 37: I Heard They Only Take Humans

Chapter 38: They Come for Something

Chapter 39: A Missing Brother and a UFO

Chapter 40: The Aluxes Are Aliens

Chapter 45: The Sky Gods Cried, Too

In this age of political correctness, it sometimes requires a writer to explain why certain terms are used in the identification of indigenous groups, even when the author herself is indigenous. The following explanation should suffice.

I have often been asked: Which is the correct word:
Mayan
or
Maya?

Many writers make mistakes in the use of the two words. There is a definite distinction. For example, the word
Maya
is used as both a noun and an adjective to describe the people and their culture. The word
Mayan
is used to describe the language or identify the language but is never used as the proper noun for the indigenous people of Mesoamerica.
Maya
is also used as both a singular and plural noun. In other words,
Maya
can refer to a single person or more than one. For example, I might say:

• He told me he was Maya and that he spoke fluent Mayan. (noun, noun)

In Mesoamerica, it is not uncommon for individuals to consider themselves Americans. Although that might come as a
surprise to those north of the border, it is commonly held that everyone who lives in North, Central, or South America are Americans.

When I refer to the United State of America, I always refer to the USA, which is the common expression in Mesoamerica when referencing the United States. Though many individuals I spoke with in Central America and Mexico considered themselves Americans, throughout the book you will note that many of the indigenous people self-identified in various other ways.

For example, the indigenous people of Belize referred to themselves as Amerindian or as Red Carib, Yellow Carib, or Garifuna (Black Carib) or, in case of the Maya, according to their Mayan language dialect. In Mexico, indigenous groups often called themselves Yucatecs or Yucatecans, referring to their place of residence on the Yucatan Peninsula, or by their dialect in other parts of the state. In Guatemala, the people were more likely to identify themselves with their distinctive Mayan dialect group, such as K’iche Maya. In Honduras, they most often called themselves Maya or Chorti Maya.

In some cases, they simply referred to themselves as
Indios
(Indian) or indigena.

Throughout Mesoamerica, UFOs are referred to as OVNI.
OVNI
is the Spanish acronym for
Objecto Volador No Identificado
. I took the liberty to use UFO throughout the narrative instead of OVNI.

This book traces my journey among the indigenous people of Mesoamerica, mainly the Maya, in search of traditional and contemporary stories of encounters with Sky People, Aliens, and UFOs. I organized my trip around the expeditions of John Lloyd Stephens and Frederick Catherwood, two 19th-century explorers, who did more to introduce the world to the incredible cities of the Maya than any other explorers before them.

I became fascinated with the adventurous duo while in high school. A teacher handed me their first book,
Incidents of Travel in Central America, Chiapas, and Yucatan
, and I followed up with their second account,
Incidents of Travel in Yucatan
. I immediately fell in love with the two explorers and vowed that someday I, too, would follow in their footsteps. Although it took me nearly forty years to realize that dream, I eventually set out to fulfill that promise I made to myself many years ago.

I began my journey, like Stephens and Catherwood did, in the country of Belize, which in 1839 was called British Honduras. Paved roads had most often replaced the trails blazed by the famous duo, though, on more than one occasion, I found the only way to access a site was by walking with guides who opened a trail with machetes. Despite the neglect of many of the sites noted by Stephens and Catherwood, there were others where considerable investment in excavation and restoration had taken place. Copan, Chichén Itzá, Uxmal, and Palenque were good examples of restored popular destinations for tourists, adventurers, and scientists.

It took Stephens and Catherwood two visits to realize their goal of uncovering the mysterious cities of the Maya. My journey began during a Christmas holiday in 2003; my last trip was in 2010. In all, I
made fourteen trips. Along the way, I visited eighty-nine archaeological sites. Stephens and Catherwood visited forty-four; some of those remain a mystery as to their location even today or have been destroyed in the name of progress. Like Stephens and Catherwood, I often veered from my planned itinerary to investigate legends or rumors. Thus I traveled to areas of Mesoamerica unknown to the two adventurers.

Through their ancient stories many indigenous groups have told stories of beings from the stars. Many Maya myths told stories of the Sky People or Sky Gods that came from the sky, often on a beam of light. Stories of giants, little people, and spirits were universal, yet were only given credence by a few pseudo-scientists. Vine Deloria, noted American Indian author/scholar, wrote in his book
Evolution, Creationism, and Other Modern Myths
that science assumed superiority of thought over the collective memory of humanity. The Enlightenment’s insistence on an objective, sterile, and amoral investigation marshaled in a new era that valued supposed rationality. The authority of truth once given to traditional wisdom was relegated to myth and legend. The mystical and spiritual experiences of humanity were regarded as non-trustworthy and interpreted as tall tales because they could not be proven. Even stories that appeared almost universally in tribal cultures across the world were not recognized as legitimate by modern scholars.