Slave Pits of the Tyrannical God (Path of Transcendence Book 2) 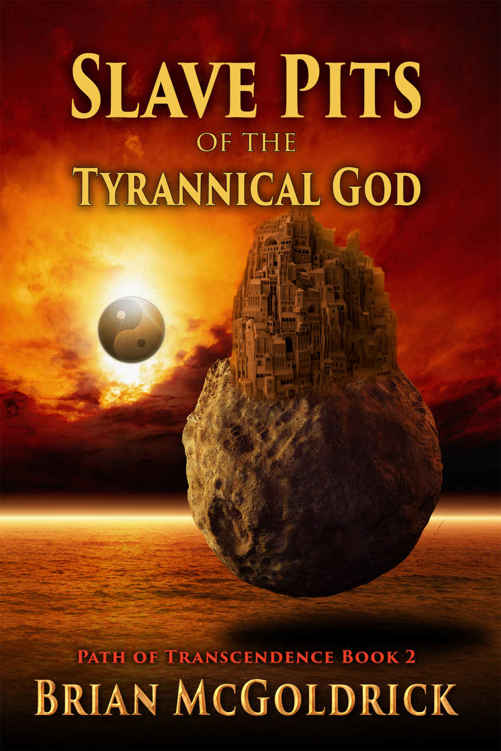 Slave Pits of the Tyrannical God

Slave Pits of the Tyrannical God

This book is a work of fiction. Names, characters, places, and incidents are either products of the author’s imagination or used fictitiously. Any resemblance to actual events, locales, or persons, living, dead, or undead, is purely coincidental. All rights reserved. No part of this publication can be reproduced or transmitted in any form or by any means, electronic or mechanical, without permission in writing from the author or publisher.

What Is Your Connection To Talon

You Cannot Kill Her

Betrayed by the person he trusted most, Brand, formerly Mark McGuinness of Earth, has been enslaved and given to a DokkAlfar Wytch, Elan'fer'sha. Trapped deep within the heart of the Great Citadel of Gor'achen, he is thrown into a gladiatorial stable and marked to be the new Champion for the stable.

In the gladiatorial stable of Elan'fer'sha, Brand meets a mysterious human Smith, with Power far beyond anything he has ever seen used before. Given no alternative by the Smith, Brand forms a compact with Elan'fer'sha. Somewhere within Gor'achen lie partial answers in Brand's quest for vengeance. If he can truly become Gor'achen's Champion, he may open a road to the Wytch's future.

While learning from the Smith, Brand works with and against Elan'fer'sha, as he tries to move farther along the Path to Power. Will Brand achieve his goals or will he fall in the blood drenched arenas of a DokkAlfar empire?

As the thick gold doors swung silently open, the only sound in the ancient hall was a bellows-like breathing. Shadows concealed the far end of the room, which stretched more than three hundred yards in length. Running down each side of the hall's sixty yard wide expanse, massive pillars, covered in gold foil, reached upward toward the gloom-shrouded ceiling. The floor of the room was paved with green marble, so polished that even the dim light from the open door caused it to shine.

*For what purpose do you disturb my slumber?*

The “voice” thundering in his mind caused the LjosAlfar in the open door to drop to his knees and bang his forehead on the marble floor.

“Apologies, My God! I did not mean to disturb your rest, but you commanded that we inform you when the child was ready for implantation and the target for replacement would be accessible.”

Dressed in jewel encrusted robes made from cloth of gold, the LjosAlfar banging his head on the floor could have sent thousands to their death with a gesture. Normally, he was the lord of all he surveyed, but before the being at the far end of the throne hall, he was of no more import than a gnat.

Light filled the audience hall, brilliant, actinic, merciless, and uncompromising. The being who rested on the revealed dais at the far end of the great hall was one of the Dragon Gods worshiped by the LjosAlfar. Over a hundred and fifty feet in length, its serpentine tail was wrapped around its powerful body. Enormous golden wings lay atop its body, like a blanket covered with delicate fish scales. The head that rose into the air atop a sinuous neck had a mouth large enough to swallow the LjosAlfar whole. In a mix of red, bronze, and gold colors, thick scales, harder than diamonds, covered the Dragon God from nose to tail.

*Bring the child to me.*

The LjosAlfar made a come-hither motion with his left hand, and a guard dressed in silver chainmail escorted a young LjosAlfar child into the hall. Staring in wide-eyed awe at the Dragon God, the child fell to its knees. Behind the child, the guard fell to his knees as well, banging his head on the ground like the cloth of gold clad LjosAlfar.

The child was less than twenty-five years of age, similar to a nine or ten year old human child in physical development. The child's simple white smock did not conceal its androgynous beauty. For non-Alfar, it is difficult to determine the sex of an Alfar child at a glance, and this one's more than average beauty would make it nearly impossible.

*Are you ready to begin your task, child?*

The child prostrated itself on the floor.

“This one lives only to serve the mighty Dragon Gods.” The child's high pitched voice held a firmness that would not be expected from one of its youth. From the fanaticism in its eyes, one could believe the child would give its life for the Dragon God without hesitation.

*Come forward, child. I will make the final preparations to you.*

A brilliant smile lit the child's face, and it scrambled to its feet. Unable to restrain itself, the child practically ran toward the front of the hall.

Narrowing its eyes, the Dragon God watched the child's approach, and its rigid scaled mouth almost seemed to smile. Though the Dragon God appeared pleased, one who could read the minimal facial expressions of Dragons would know that it was not a contentment that contained any beneficence toward the child.

Reaching the foot of the dais, the child again dropped to its knees, with its hands clasped in front of its chest. Its upturned worshipful eyes were glued to the head of the Dragon God that looked down on it from above.

*Prepare yourself, child. You will suffer pain.*

“AAAAAAAARRRRRRRRRRR!” The child's already high-pitched voice rose three octaves as its agonized shriek filled the hall. It kept screaming, until its lungs were empty. Gasping for more air, its scream continued, until unconsciousness claimed the small body.

Several hours later, the unconscious body of the child floated into the air and down the length of the hall, to be deposited at the feet of the LjosAlfar in the cloth of gold robes.

The LjosAlfar knelt again, once more banging its head on the ground.

Volleys of fireballs were being launched from the crystal airships, but at that point, none had yet done any significant damage to the stone airship.

“Lord Elder, our scouts report a squadron of seven DokkAlfar cutters on an intercept course with the target.” Like all the officers of the LjosAlfar Sky Navy, the airship's Captain wore a silver breastplate over a sky blue uniform.

“Perfect. Bring down that DokkAlfar scow.”

Standing silently at the Lord Elder's side, the child who was prepared by the Dragon God watched the flight of the stone airship, without the slightest hint of any emotions crossing its face.

The three crystal airships began to fire on the larger stone airship, but they were no longer missing or merely singeing the hull. Shards of stone were blown off the DokkAlfar airship, with every concussive detonation of the fireballs. Within only a short time, the stone airship became unstable in its flight and began to angle towards the ground.

With the DokkAlfar ship already nearly crippled, the fire from the crystal airships became far more discriminatory. The fireballs judiciously destroyed the sails and the control surfaces for maneuvering the stone airship in flight.

As the stone airship impacted the ground, control vanes and masts broke away, and huge fractures appeared in the hull. Miraculously, or maybe not so miraculously considering the amount Power used in the construction of an airship, despite the damage, the hull did not break up.

The Lord Elder's voice matched the chill in his face. “Take landing parties down there and kill everything that lives, except for the designated child.”

The Lord Elder listened impassively to the clamor of combat rising from below, as he stared off into the distance.

The Lord Elder spun toward the child, his vicious slap sending the child sprawling to the deck.

Its jaw laid open to the bone by the large diamond in the Lord Elder's ring, the child stared up at the Lord Elder, still without any sign of expression.

“We are no longer parent and child! We can never be parent and child again! If you even think such thoughts among the DokkAlfar, you will be exposed and tortured for information!”

The child rose to its feet, without ever voicing the question it had begun to ask.

“You were chosen because you can utilize the Umbra. From this day forward, until the Day of Reclamation, you are DokkAlfar. Do not think otherwise. Do not act otherwise.”

After a time, when the sounds of battle had died, the Captain returned to the airship, with a sack slung over his shoulder. He stood at attention before the Lord Elder on the quarterdeck, with the sack at his feet.

“As you commanded, I have the designated child.”

As the sack was pulled down, the face of a DokkAlfar child was revealed. Except for the expression of hostile arrogance, it could have been the twin of the child standing at the Lord Elder's side.

The child spat out sentences in the DokkAlfar language, but none of the LjosAlfar present could understand the tongue.

At the Lord Elder's command, the Captain struck the DokkAlfar child a vicious blow, with the back of his hand.

The DokkAlfar child bounced off the deck with the sound of breaking bones. Its already shattered jaw flopped around like a slab of meat. In shock and barely conscious from the force of the blow, the DokkAlfar child did not resist when the Lord Elder placed a golden net over its head.

After placing a similar on the head of the LjosAlfar child, the Lord Elder knelt between them, and exercised his powerful psi. As the massive amount of information, comprising the entire life of the DokkAlfar child passed through his mind, the Lord Elder's lips drew back from his teeth in a rictus.

The LjosAlfar child's fists and jaw were tightly clenched, as it vainly sought to remain stoically silent under the painful impact of a life and mind not his own. After few moments, the LjosAlfar child began to scream like a damned soul, until it finally fell into unconsciousness. If not for the Lord Elder's hand tightly grasping its skull, the LjosAlfar child would have fallen to the deck.

As he finished the transfer of knowledge, the Lord Elder looked down on the corpse of the DokkAlfar child.

“We will throw this refuse into the Troll Jungles on our return to Mount Tian.”

“As you command, Lord Elder.”

“Take the implant and place it appropriately in the wreckage. Break its bones, but do not leave any life threatening injuries.”

“As you command, Lord Elder.”

After the Captain took the LjosAlfar child, the Lord Elder stared out toward the south, where the Pangu Citadel rested. The Jotun called it The Labyrinth of Yggr, but in truth, it was the property of the Dragon Gods.

Ships from the West by Paul Kearney
The Splintered Kingdom by James Aitcheson
The Lost Fleet by Barry Clifford
Fool's Gold by Jon Hollins
All Snug by B.G. Thomas
The Balanced Scorecard: Translating Strategy Into Action by Kaplan, Robert S., Norton, David P.
A Romantic Way to Die by Bill Crider
Beetle by Jill McDougall, Tim Ide
Fates and Traitors by Jennifer Chiaverini
The Great Hunt by Robert Jordan