Read Sleepless in Hollywood: Tales From the New Abnormal in the Movie Business Online

Sleepless in Hollywood: Tales From the New Abnormal in the Movie Business 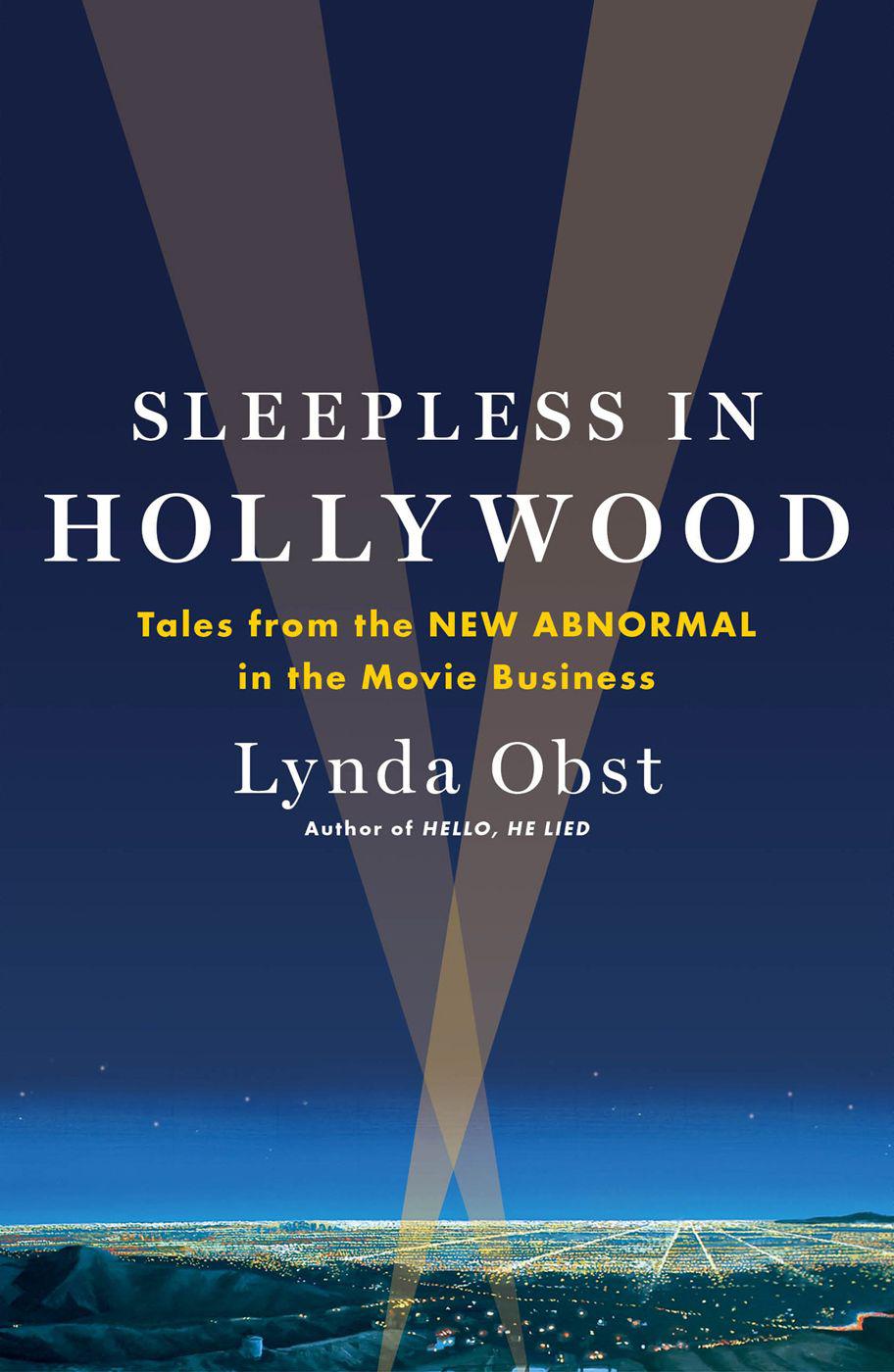 HAVE YOUR POPCORN WITH SOME CHOPSTICKS

FROM PARAMOUNT TO PARANOIA

THE DIASPORA: THE GOLDEN AGE OF TELEVISION

DOES THE FUTURE HAVE A FUTURE?

To Oly, who keeps me in the game with his wisdom, humor and tenacity, and is still the best trench-mate around.

To Sunny, Marlowe and Julie, who make Thursday night my favorite night, so I remember what all the tenacity is for.

And to Nora, who died the day I finished. Now I have to plod on without her. I still try to imagine her telling me what to do and hear her fixing my sentences. Though, as ever, when I get it wrong it’s not her fault.

I first arrived in L.A. from New York in the early 1980s, a trained reporter, unhappily untethered from the
New York Times.
All my friends were still in New York City, along with everything else familiar to me. Hollywood was a strange new habitat where people appeared to lie for a living, thus the title of my memoir of surviving that shock,
Hello, He Lied.
By the time I started this book, all that was old hat.

By the mid-2000s, after sixteen movies and a nice share of hits and (luckily) fewer flops, my colleagues and I were undergoing something much weirder than lying. We found it harder and harder to get movies made, and I’d been steadily making movies for years. This wasn’t just me or my studio, though we were certainly part of the story—there was something systemic going on that was changing what we could make. It seemed that whatever it was, it suddenly wasn’t what I was selling and what I’d been successfully making. It was more than frustrating. It was catastrophic, and for many more people than just me. I had to figure it out.

My life and my work became part of the book. I started asking questions of every smart person I knew. Unlike a reporter, because I work and dine and live here (and intend to continue both eating and working here), my sources are my colleagues and friends, past and current—people I know well. I can’t be as exhaustive as a reporter can be and speak to the multitudes of excellent sources whom I don’t know, and might someday work with.

But my sources, some of the most important executives in
town—studio heads, marketing heads and the like—the players who turn the levers of this business and set its course, are relaxed, intimate and funny in their interviews for the same reason, and in these pages, you can get to know these people as I do. You can see them at this moment of transition, trying to create and open the movies they came into the business to make as the economic model of the industry shifts beneath them.

It took me a long time to write this book, mostly because it took me a long time to figure it out. At many moments when I thought I’d “gotten it,” it was like Heraclitus’s river: Just as I came to understand something, it changed, or as I wrote about it, it changed, or I captured the change, and then it changed again. And of course, living and working through “the most interesting of times,” the Chinese curse warns you, slows you down. I tell the story as I suffered through it, survived it (hopefully), thought I cracked it and then began to see the light at the end of the tunnel.

2009
The Invention of Lying
(producer)

No person who is enthusiastic about his work has anything to fear from life.

SCENE ONE
THE NEW ABNORMAL

I can trace the moment when I noticed that what seemed like normal was changing—that the ways we’d always done things since time immemorial (at least in the three decades since I came to Hollywood) were beginning to become obsolete. It was the death of what I now call the “Old Abnormal” and the birth of the “New.”

I call them the Old Abnormal and the New Abnormal because Hollywood, let’s face it, is never
actually
normal. Think of how bizarre the people are, for starters. Famous hairdressers, notable Israeli gunrunners, Russian gangsters, mothers who score on their daughters’ successfully leaked sex-tape escapades, and Harvard grads who chase hip-hop stars and Laker Girls make a unique kind of melting pot. It boasts smart people galore with and without prestigious diplomas, and loves a craven con man with a new angle, a new pot of gold or a new look. It’s an equal-opportunity exploiter of talent.

No wonder it draws such dysfunction: Lying is a critical job skill; poker is as good a starter course as film school. How else would you know that the line “Sandra Bullock wants to do this” really means “It’s on her agent’s desk,” and “Three studios are bidding on this script” means “Everyone’s passed but one buyer who hasn’t answered yet.” The language has a sublanguage, and there is no libretto. It’s just plain Abnormal, and always has been.

I saw that some key aspects of the abnormal Hollywood I’d
come to love, or at least enjoy heartily, were changing into something new, but of course I didn’t know what. It was when the long-stable Sherry Lansing/Jon Dolgen administration of Paramount, where I was working in 2001, began to teeter a bit as I was making
How to Lose a Guy in 10 Days,
a romantic comedy starring Kate Hudson and Matthew McConaughey about two players playing each other and losing the game but unwittingly winning love.

Forty-eight at the time, Sherry Lansing was tall and effortlessly glamorous, one of the few women in Hollywood whose face and body had never seen a needle or a knife. The first chairwoman of a major studio, she shattered a glass ceiling in 1992 that hasn’t been mended since. Mentored by men and a mentor to women, she is that rare combination of a man’s woman and a woman’s woman at the same time.

Dolgen and Lansing were a great duo: She was class, he was crass. While Dolgen’s screaming could be heard throughout the administration building, no one would ever get bad news in Sherry’s office. (She had employees for that.) Dolgen’s belligerence was as famous as Sherry’s graciousness. The whole thing worked for them for a long time.

Sherry had been a big supporter of my little romantic comedy—she loved the script I’d developed with her team, and that helped me get it into production. But much to my surprise, it turned out that Paramount wasn’t even paying for the movie. My real financier was a lovely guy named Winnie, who ran a German tax shelter. I found this out on the set when Winnie introduced himself to me and told me that Paramount had sold off their domestic and international box office rights to him to fund the relatively low cost of the movie ($40 million). Paramount kept only the DVD rights. But that, I understood, was how they often put together their movies, selling off the ancillary rights to keep their production costs down. This is called risk aversion. It either meant they thought the movie had no upside other than its DVD
value, or that it was the only way Sherry could get the movie made at the time.

As the rest of the country veered from red alerts to orange alerts in the aftermath of 9/11—
Variety
headline: “Showbiz Rocked by Reel Life!”—I was absorbed in simpler problems, like casting a guy for Kate Hudson to lose in ten days. As rocked as we may have been—and we were rocked—the show must go on. I was going into production. But in the boardrooms and executive suites of Viacom, which owns Paramount, everything was getting very unsettled in a consequential way.

The year 2001, as we began the movie, turned out to be a profoundly transitional one, not just for America (and the world, in the wake of 9/11), but for the movie business as well. Looking back, it would seem that Paramount had been looking through the wrong end of the telescope, in keeping only the DVD rights in its sights and ignoring the world. It was the year of the first
Harry Potter
and the first
Shrek,
and the audiences were getting their first exposure to the brave new world of breakthrough special effects in CGI and animation. But the historical fiscal conservatism of Paramount meant they were ignoring most of the new special-effects-oriented scripts, created for this startling technology, starting to hit the town.

Paramount had a philosophy under Sherry Lansing and Jon Dolgen, and for a long time it had worked: Sherry chose pictures by following her gut, and then would make them for the lowest possible budget (and lower). She’d made
Forrest Gump
(giving Tom Hanks and director Robert Zemeckis a big piece of the profits in success, but little in up-front fees). She green-lighted Mel Gibson’s Scottish epic and Oscar winner
Braveheart.
When Fox went way over budget on
Titanic
and needed a partner to finish the film, Sherry was able to say yes by buying domestic rights (U.S. and Canada) based on an overnight read. But it wasn’t working anymore.

Wedding Girl by Madeleine Wickham
The Iron Admiral: Deception by Greta van Der Rol
Meditations on Middle-Earth by Karen Haber
The Vishakanya's Choice by Roshani Chokshi
The Artifact by Quinn, Jack
All Gone by Stephen Dixon
The Chase by Lynsay Sands
Always: Broken Series Book Four by Annie Jocoby
Confidence Tricks by Morgan, Tamara
How a Mother Weaned Her Girl from Fairy Tales by Kate Bernheimer