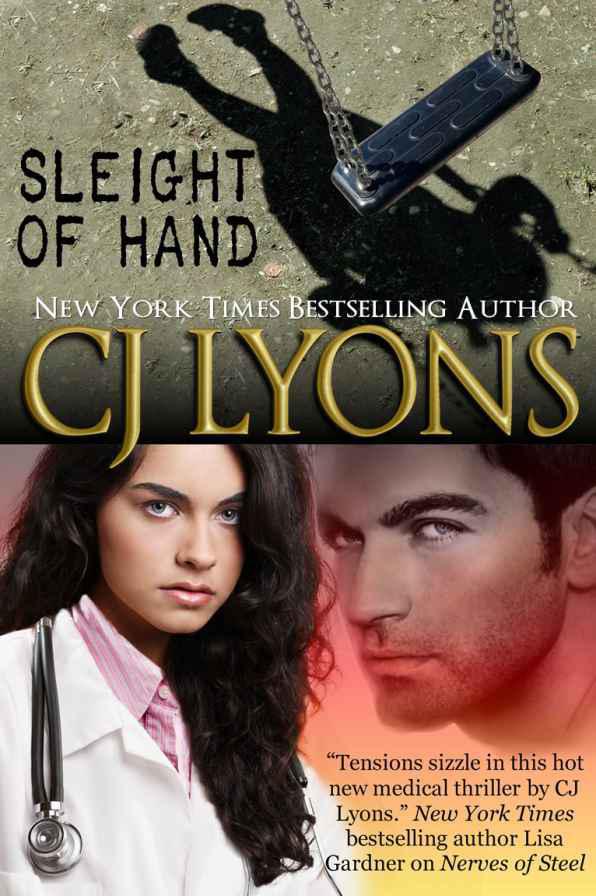 "Pulse-pounding suspense and hair-raising chills...a story of danger and intrigue that defies any reader to put it down." ~
New York Times
Bestselling author, Susan Wiggs

"An intense, emotional thriller…(that) climbs to the edge of intensity." ~National Examiner

"Riveting." ~Publishers Weekly Beyond Her Book

Lyons "is a master within the genre." ~Pittsburgh Magazine

"This fast-paced, suspense-filled story will leave you breathless and begging for more." ~Romance Novel TV

"I did not want to put it down….An incredible way to spend a few hours!" ~5 Cups, Coffee Time Romance

"Simply exceptional.  The action never lets up…keeps you on the edge of your seat." ~Roundtable Reviews

"Explodes on the page…I absolutely could not put it down." ~Romance Readers' Connection

All rights reserved, including the right of reproduction in whole or in part in any form. This book, or parts thereof, may not be reproduced in any form without permission in writing from the publisher, Legacy Books. The scanning, uploading and distribution of this book via the Internet or via any other means without the permission of the publisher is illegal and punishable by law.

Please purchase only authorized electronic editions, and do not participate in or encourage electronic piracy of copyrighted materials. Your support of the author's rights is appreciated.

The last time Dr. Cassandra Hart entered Pittsburgh's Three Rivers Medical Center she was covered in the blood of the man she had killed.

Not to mention bits and pieces of his brain and skull.

Now, forty-one days later, Cassie halted beneath the large marble angel that stood near the doors of the ER.  Her palm grew clammy as it gripped her cane, her fingers digging into the rubber handle.  Once upon a time, Three Rivers Medical Center was a second home to her, one of the few places where she felt comfortable, safe even.   Today she looked at the door and fear churned through her gut, a counterpoint to the throbbing in her ankle.

The last time she crossed this threshold, she'd come not a physician, but as a patient.  A victim.

She swallowed hard, forcing down bile as she remembered the expressions of her colleagues that night.  First came surprise, then pity, and finally–when they learned what Cassie had been forced to do, trapped in a cellar with a killer–fear.

Her eyes squeezed shut at the memory.  What if she couldn't handle it?  What if she'd lost her edge?  People's lives were at stake.  What if she made a mistake, hurt someone?  Once begun, the treadmill of anxiety revved into overdrive.  She could take more time.  Her boss and doctors had wanted her to, said she was coming back too soon.

Cassie opened her eyes and realized she was hunched over, leaning on the cane.  Her gaze fixed on the concrete walk splattered with mud from April showers.  Both hands now pressed on the cane as if the thin cylinder of metal was the only thing keeping her on her feet.

She hated the damned cane.

Lashav.
She borrowed one of her Gram Rosa's favorite gypsy curses.  Shameful.  She could damn well stand on her own two feet.

Forcing herself upright, she faced the doors emblazoned:
Emergency Department
in blood-red letters.  She took a deep breath, balanced without the cane.  Turning her gaze to the marble angel, she sent a quick prayer for hope, strength, for whatever it would take to get her through this day.

Cassie walked the remaining ten feet to the entrance.  She threw the cane into the garbage can.  The sliding glass doors swished open, and she crossed over.

"This doctor, Cassandra Hart, she almost got you killed, didn't she, Detective Drake?"

"Yes.  No!"  Mickey Drake pulled his gaze away from the view of Pittsburgh's PNC baseball stadium and turned to face the departmental psychiatrist.

Noah White was his name, although the man had one of the darkest ebony complexions Drake had ever seen.  White's accent was a soft, southern syrup.   Better to sooth the jagged nerves of men who carried guns and knew how to use them.

"No, you don't understand.  She saved my life."

"But you wouldn't have been there, would not have gotten shot if not for her, correct?"

Why did shrinks have to twist everything?  Bad as lawyers that way.  Drake spun away, clamping his jaws shut before he said something stupid.  He needed White's recommendation to the OIS team to allow him to return to duty.  The Officer Involved Shooting team was already breathing down his neck because he'd canceled this psych eval twice already.  Three strikes and he was out.

Drake's hands clenched into fists as he paced the room.  Damn, his leg ached.  The surgeons said the wound was healed, but there was still a knot where the bullet had torn through his thigh muscle.

"Detective?" White's voice brought Drake back to the subject at hand.

"No, I wouldn't have been there if it weren't for her," Drake admitted, running a hand through his hair, tugging on dark strands past due for a trim.  He found himself back at the window, avoiding the shrink's hyper-vigilant gaze.

The Northside office building had a great view down into PNC Park.  The grass in the baseball stadium shone with a rich viridian hue.  April, home games, bright sunshine.  Damn, he missed Three Rivers Stadium where his dad used to take him as a kid.  Drake remembered clutching his glove, anxious for any chance to catch a fly ball as he and his dad hung out over the railing beyond third base.

Drake shook his head, turning his back on the springtime antics of Pittsburgh Pirates' baseball.  He faced White once more.

"We also wouldn't have found the killer without her," he reminded the shrink, trying to steer him away from the subject of his relationship with Hart.  A relationship that both confused and frightened Drake.  No way in hell was he gonna let any head-shrinker start dissecting those feelings.

"Stress debriefing" the Pittsburgh Police Bureau called it.  Bullshit was more like it.  What good would come of sitting around talking about things in the past?  What he needed was to get back to work.

"You sound like you feel angry.  Is that because Hart was a civilian doing your job for you?" White's voice was bland as he probed, searching for the weak spots in Drake's psyche.

Drake was silent.  He imagined he could hear the crack of the batter connecting with a pitch far below.  It wasn't so different from the sound a tire iron made when it cracked a human skull.

"Or because you almost died because of her?" White continued.

The roar of the crowd was a distant rumble as runners rounded bases.  To Drake it sounded like the thunder of gunfire in close proximity.  Sweat gathered at the back of his neck, slipping under his shirt collar as he tried to block out the memory of the bullet tearing through his chest, collapsing his lung, the certain knowledge that each breath would be his last.

"I'm not angry with Hart," he told his reflection in the window.

Fed up to here with shrink talk, Drake whirled on White, ignoring the twinge in his still-healing thigh.  "You're the one with all the answers.  You tell me.  What should I feel?"

White curled a corner of his mouth into a disappointed frown.  It was an expression Drake was well acquainted with.  His dad had often used that same look, that "I expected better of you" look.  Drake never had the right answers for him either.

He sighed and sank into the overstuffed chair farthest from White.  The only way he was going to get back on the streets was to play by White's rules.

"I'm angry with myself," he said, the words almost catching in his gritted teeth.  Damn, he hated talking about this shit.  "I'm a cop.  I should have protected her, should have been the one..."

His voice trailed off, a haze of blood floating over his vision despite the sunlight streaming into the office.  He blinked and it was gone, leaving only White, his face neutral, waiting for Drake.

"You know she killed a man that night?" Drake continued.  "Caved his head in with a tire iron."

Another cheer raising from the crowd at the ball game made for a bizarre punctuation to his words.

The shrink nodded, folding his hands over his ample belly.  With his bald head, rimless glasses and full beard, he resembled a dark-skinned Santa Claus.  Drake could only hope that White had an early Christmas present for him–a chit back to the streets.

"And you blame yourself that she was forced to such extremes?"

"
Primum non noncere,"
the shrink supplied.  "First, do no harm."

"Yeah, whatever.  Anyway, things haven't been the same between us since then."  Drake closed his eyes.  He would never have been here if this wasn't the only way to get back on the job.  But this wasn't helping, he felt worse now than he had before.

"After all that happened, you're still interested in pursuing a relationship with her?"  White sounded surprised.

Drake's eyes snapped open.  "Of course I am."

"She's been hurt before.  Her ex-husband was abusive.  But she got out.  In fact," he smiled at the memory, "one time he came after her, and she gave him a black eye."

The shrink was silent.  Drake wished he'd never said anything about Hart's ex, Richard King.  Even though the man was now confined to a wheelchair, he and his lawyer brother were still around to cause trouble.  They blamed Hart for the accident that ended King's career as a surgeon.

"It was in self defense," he added lamely.  White remained silent.  The only sound in the room was the infuriatingly slow ticking of the clock.  "It's not like she's a violent person. She's passionate, that's all."

"Passionate about her ex-husband?" the doctor asked in a bland voice.

"No.  That's over."  Drake returned to his feet, prowling the room once more.  Judas H, how the hell had they gotten onto this subject?   "She's passionate about everything.  This whole thing started because she wanted to help a patient.  She latches onto something or someone and suddenly she feels responsible for everything that happens.  And she won't let go, won't stop until everything's right."