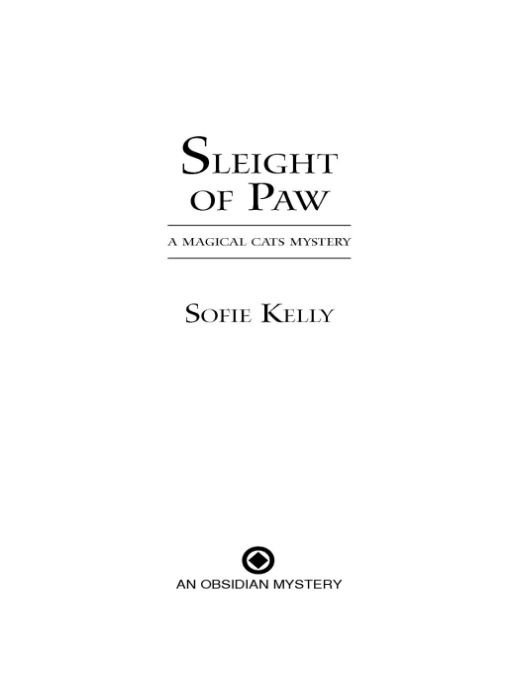 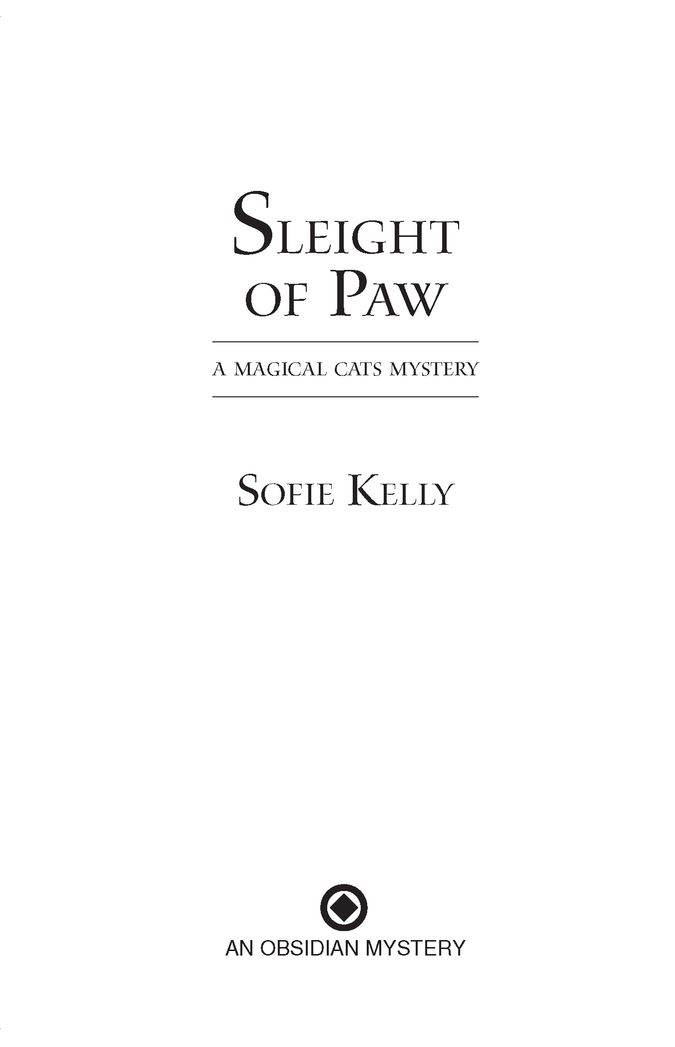 Table of Contents
Title Page
Copyright Page
Acknowledgements
Chapter 1
Chapter 2
Chapter 3
Chapter 4
Chapter 5
Chapter 6
Chapter 7
Chapter 8
Chapter 9
Chapter 10
Chapter 11
Chapter 12
Chapter 13
Chapter 14
Chapter 15
Chapter 16
Chapter 17
Chapter 18
Chapter 19
Chapter 20
Chapter 21
Chapter 22
Chapter 23
Chapter 24
Chapter 25
Chapter 26
Chapter 27
Chapter 28
Chapter 29
Teaser chapter
ABOUT THE AUTHOR
Sofie Kelly
Also by Sophie Kelly
NO CAT DOOR REQUIRED . . .
The steps up to the apartment were at the back of the building. I set the messenger bag down on the floor of the covered porch at the top of the stairs. Herc popped his head out and looked around. “Not a sound,” I warned. “Not a meow, not a rumble, not even a burp. Rebecca will be here any minute.”
I bent down to close the top of the bag. He jumped out, looked right and left and then disappeared through the door before I could grab him.
Yes, through the closed door.
My heart stopped. I dropped down into a crouch. Hercules was definitely gone, gone through a thick, solid door. That was the other thing about him that I couldn’t tell anyone. He could pass through any solid object—doors, six-inch-thick walls, concrete foundations.
I didn’t have a clue how he did it. In fact, the first time I’d seen him walk nonchalantly through an inch-and-a-half-thick wooden door at the library, I thought I was having hallucinations or even a stroke. Because cats can’t walk through doors or walls . . .
can they?
Also by Sophie Kelly
Curiosity Thrilled the Cat
OBSIDIAN
Published by New American Library, a division of
Penguin Group (USA) Inc., 375 Hudson Street,
New York, New York 10014, USA
Penguin Group (Canada), 90 Eglinton Avenue East, Suite 700, Toronto, Ontario M4P 2Y3, Canada (a division of Pearson Penguin Canada Inc.) Penguin Books Ltd., 80 Strand, London WC2R 0RL, England
Penguin Ireland, 25 St. Stephen’s Green, Dublin 2,
Ireland (a division of Penguin Books Ltd.)
Penguin Group (Australia), 250 Camberwell Road, Camberwell, Victoria 3124, Australia (a division of Pearson Australia Group Pty. Ltd.)
Penguin Books India Pvt. Ltd., 11 Community Centre, Panchsheel Park,
New Delhi - 110 017, India
Penguin Group (NZ), 67 Apollo Drive, Rosedale, Auckland 0632,
New Zealand (a division of Pearson New Zealand Ltd.)
Penguin Books (South Africa) (Pty.) Ltd., 24 Sturdee Avenue,
Rosebank, Johannesburg 2196, South Africa
Penguin Books Ltd., Registered Offices:
80 Strand, London WC2R 0RL, England
First published by Obsidian, an imprint of New American Library, a division of Penguin Group (USA) Inc.
First Printing, September 2011
Copyright © Penguin Group (USA), Inc., 2011 All rights reserved
OBSIDIAN and logo are trademarks of Penguin Group (USA) Inc.
Without limiting the rights under copyright reserved above, no part of this publication may be reproduced, stored in or introduced into a retrieval system, or transmitted, in any form, or by any means (electronic, mechanical, photocopying, recording, or otherwise), without the prior written permission of both the copyright owner and the above publisher of this book.
PUBLISHER’S NOTE
This is a work of fiction. Names, characters, places, and incidents either are the product of the author’s imagination or are used fictitiously, and any resemblance to actual persons, living or dead, business establishments, events, or locales is entirely coincidental.
The publisher does not have any control over and does not assume any responsibility for author or third-party Web sites or their content.
The scanning, uploading, and distribution of this book via the Internet or via any other means without the permission of the publisher is illegal and punishable by law. Please purchase only authorized electronic editions, and do not participate in or encourage electronic piracy of copyrighted materials. Your support of the author’s rights is appreciated.
ISBN : 978-1-101-54398-6