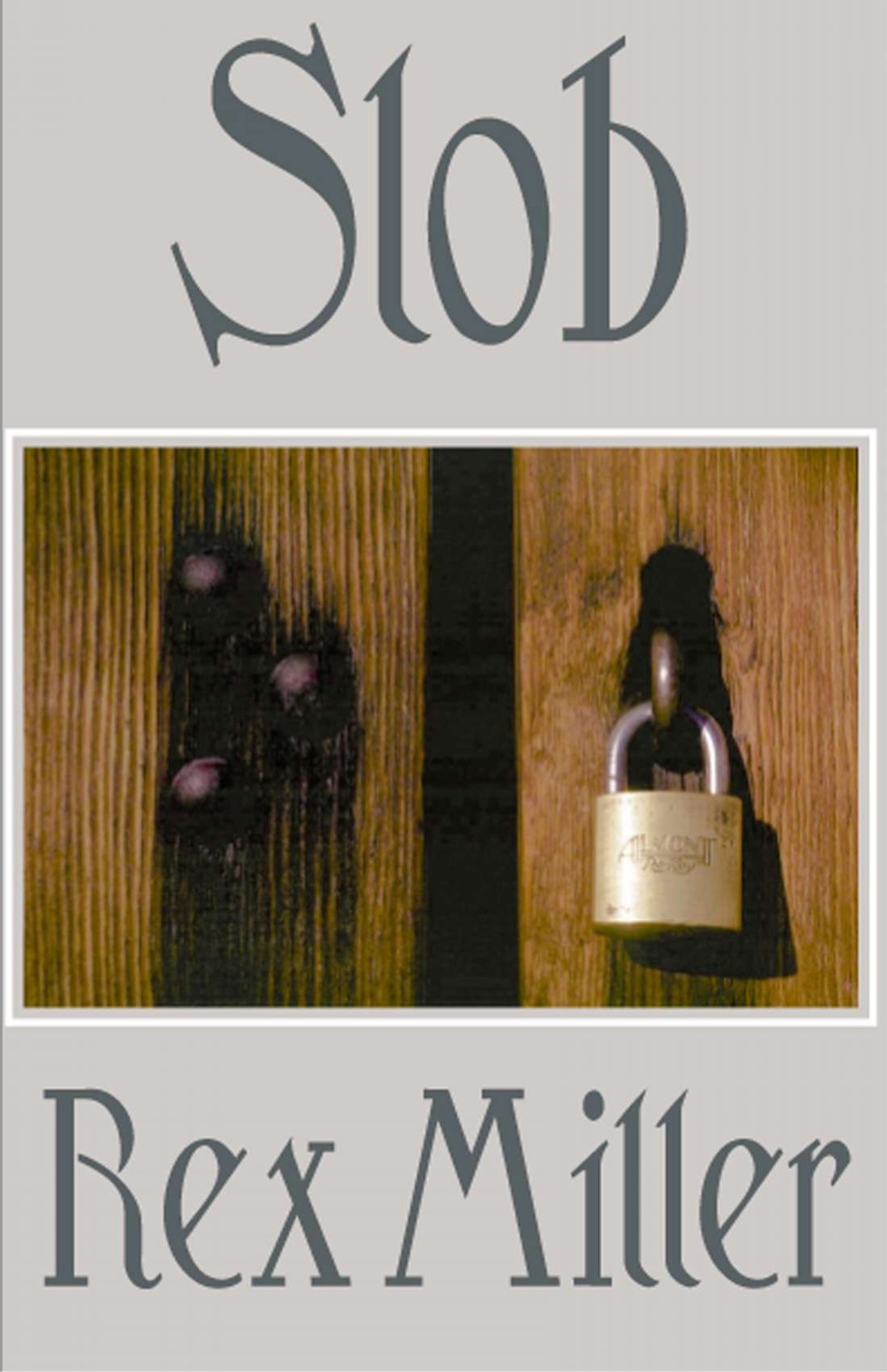 No part of this publication may be reproduced or transmitted in any form or by any means, electronic, or mechanical, including photocopy, recording, scanning or any information storage retrieval system, without explicit permission in writing from the Author.
This book is a work of fiction. Names, characters, places and incidents are products of the author's imagination or are used fictitiously. Any resemblance to actual events or locals or persons, living or dead, is entirely coincidental.

Other works by Rex Miller

The First Time Together

The Jack and the Queen of Hearts

Chaingang and the Flames

H
er first awareness of him is a presence. Unseen. A stench. It comes around the corner before him, preceding his physical entrance in a sickening downdraft that washes over her and she recoils from the smell which is a combination of rank body odor and sewage and sulfurous stink of rotten food, and it assails her nostrils with the foulness of evil. Then seeing him she flinches again, fighting to regain her composure, resolutely, politely, trained to serve the public, a smile fixing itself to her mouth as he approaches the counter in this awful, stinking swirl of poisonous air.

He grunts out a monosyllabic name, not his real one, and she mumbles something as she hands him his order and checks the amount. It is exactly forty dollars to the penny. She tells him and he produces the money. He hands her the exact amount in filthy, sweat-soaked, crumpled bills that she can barely stand to touch. She thanks him, ringing the order on the cash register and vowing to wash her hands immediately. He swoops up the large sack of food in a giant paw and lumbers away, leaving behind the stinging, terrible odor and the paralyzing, heart-hammering fear of some imagined and unspeakable threat. To her he will always be "forty dollars worth of egg rolls."

He is the one they called CHAINGANG in Vietnam. He was the one who they said back in Marion had taken a human life for nearly every pound of his weight, and he weighed nearly five hundred pounds. He is death personified, demoniacal, unstoppable, bloodthirsty, and very, very real. He wrenches open the door of the stolen car and tosses the sack of food into the passenger seat as he crashes down behind the wheel, the springs groaning in protest. He thinks how easily he could have killed the aloof woman behind the counter in there. How pleasant it would have been to sink a sharp object into her throat, ripping down across the breasts and then the abdomen and then gutting her and taking the parts he liked the best. And the thought of this fills his head with a scarlet roar.

S
he was one of those women who could look like eleven different people depending on what she felt like, what she was wearing, and when you saw her. At thirty-eight, Edith Emaline (rhymes with valentine) Lynch was the woman you see but can't quite describe five minutes after you leave the checkout lane of the Piggily Wiggily. She's the sort of vaguely good-looking one in the second row at PTA. The anonymous-featured Wednesday-night mother whose turn it is to drive the kids in to church. But catch her when the moon is right and her self-esteem is in overdrive, give her a few minutes to pull herself together, and another Edie steps out on those long, long, shapely legs that seem to just keep going. And you've got a knockout.

Knocked out was more like it at the moment. Stray wisps of hair loose around that wide, interesting although not precisely pretty face, she wasn't at her peak. She hadn't had a pang of loneliness for Ed hit her like that for weeks, and when she dusted the mirror frame in the hallway she had seen a sort of a shadow or something and she jumped halfway out of her skin and felt her heart nearly jump out of her chest. Christ! Oh, my God. For not more than a fraction of a second she thought she'd seen something, not in the mirror exactly but in the shadows and just a hint of movement and Lord have mercy she'd just had the feeling Weirdo was outside the window again watching.

Weirdo was a totally harmless but maddeningly incorrigible old handyman who had all the women in the neighborhood looking over their shoulders. He was a peeping Tom, as her mother's generation had said, a voyeur whose major thrill was to peer in windows. He had never done anything, and in spite of having been rousted by the police endlessly, locked up a few times for short periods, and having generated a sizable rap package at the local constabulary, he'd never actually committed any crime beyond being a public nuisance. His peeping misdemeanors paled in a big city where even the affluent yuppie suburbs had their fair share of raincoat flashers, hugger-muggers, dong danglers, and wienie waggers. Still. Who knew for
sure?
Maybe one day Weirdo would glimpse something that might turn him around and he wouldn't just look in the window, he'd COME in the window.

After having laughed with the coffee-crowd gals about the Weirdo stories, he'd paid her a social call—and it hadn't been all that funny. The first sign of him had been the tracks that they kept finding around the house from time to time. At last they figured out what it was. It was the wooden box Weirdo dragged around to carry his tools in. Suddenly the jokes about him doing "odd jobs" had come back to haunt her. He was coming around, presumably at night, peering in the windows, thinking God only knows what thoughts. Ed went crazy. Finally they called the police and the cops picked the old guy up.

He promised he wouldn't come around Edie's house. And since they'd never actually caught him looking in, the cops let him go with a tough warning. If anyone saw him anywhere NEAR the Lynch house again they'd throw away the key. He was his usual meek, apologetic, harmless old self. She knew he was still out there somewhere doing his thing and scaring housewives and kids half to death. He wasn't so harmless, Edie thought to herself, if he gave somebody a heart attack.

It was just at that second, with her thinking of her own pounding heart as she took the rag and squirted Windex on the mirror and started rubbing, that she thought about how it had been done to Ed and then she had just let it all come back flowing over her again and for just that moment she squinted her eyes shut as tightly as she could and pretended that the shadow had been Ed sneaking up behind her the way he liked to do, and she recalled the last time between them and how sweet it would always be to her.

He'd come home early and Lee Anne had been over at Jeanne's and they'd had most of the weekend to themselves. They were never great, imaginative lovers. Sex had been fine between them but no big thing. For a while she'd kind of worried about that but no matter what the other women said or what she read in those magazines she subscribed to and picked up at the grocery store, instinctively she knew it was all right between them. They just didn't go for anything kinky or far out. Just the plain old-fashioned way was plenty okay for Eddie. He was gentle but he never wasted a whole lot of time with it. It was something that he enjoyed, in other words, but it hadn't occupied a big part of their shared life.

She remembered how prosaic and boring the conversation had been. They'd talked about Lee coming down with flu, about the contract he'd picked up from Rathmusson Farms, how Sandi and Mike wanted them all to go to Gatlinburg again that year and split the cost, how the Jehovah's Witnesses had come by again that day and left a
Watchtower,
how you shouldn't pick up hitchhikers anymore, all kinds of typical, thrilling stuff that a married couple discusses. She remembered that dialogue as very special, though, since it was their last time together. She still recalled how he'd told her they needed new locks, that he'd seen something about those chains being worthless and the word
dead bolt
had lingered in her mind. The word echoed around in her mind now with its dark imagery.
Dead bolt.

She thought of how vulnerable she was, alone in the big house with its windows everywhere and the shadows and how the neighborhood was so empty at this time of the day. She thought of a news story she'd read in last night's paper about a little boy being abducted not far from them. Somebody could grab Lee even in the few hundred feet between the school door and her car. God. It was all enough to make you scream. Nobody was safe anymore, she thought. But why
Ed?
He was such a good man.

"Ritualized," the detectives had said when they were describing the way he had been mutilated. Mike's folks had died like that in a way. Mike had been Eddie's best friend and his wife Sandi was Edie's best friend. It had made for such a great foursome because even the kids could play together, Edie's eight-year-old and Sandi's youngest. And Mike's mom and dad had won a trip to Japan and the plane had crashed into Mount Fuji and everyone had lost their lives and Mike had never recovered from it. There had been something almost ceremonial in the mass death. She could never quite explain it but that had somehow made it seem even more awful. And then to have someone do that to Ed.

The thoughts were all running together and she started to squirt cleaner on the mirror again and realized she'd been polishing the same circles over and over. It was squeaky bright. It was her eyes that were misting over. She gasped involuntarily and pulled out one of the dining-room chairs and let herself slump down in it momentarily, but then she snapped right out of it. Stop feeling sorry for yourself, missy. You've got to clean this house and go shopping and you've got a fine little eight-year-old darling of a daughter to care for. And none of this is going to get done with you sitting here wishing Ed back. And she jumped out of the chair and attacked the household chores.

A Raspberry in the Dark - Tales of a Lesbian Vampire (The Pixie Chix) by Zephyr Indigo
BRAINRUSH 02 - The Enemy of My Enemy by Bard, Richard
The Galilean Secret: A Novel by Howard, Evan
Secret Keeper by Mitali Perkins
Justice Burning (Hellfire #2) by Elle James
The Dancer at the Gai-Moulin by Georges Simenon
The Time of the Clockmaker by Anna Caltabiano
Wedding at Wildwood by Lenora Worth
Fallen Idols MC - Complete by Savannah Rylan
Green Girl by Kate Zambreno