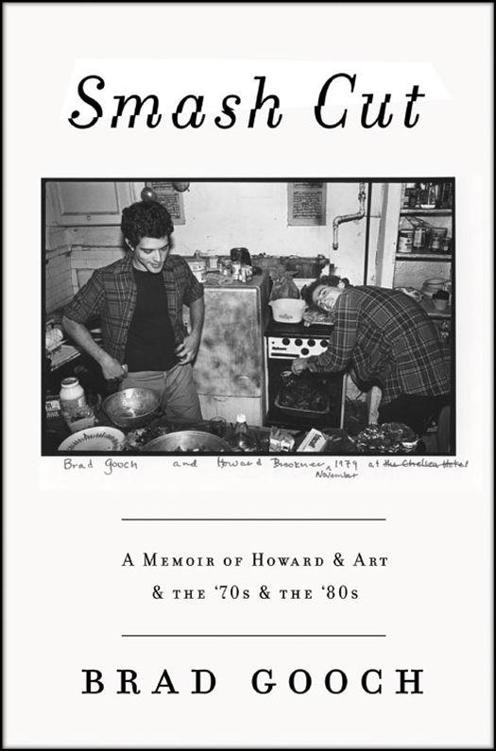 I
’M SITTING ALONE, TAKING A BREAK FROM THE FILM
crew. Howard’s nephew Aaron is in town making a very handheld documentary, seeking to discover more of the life of his uncle. He’s set up establishing shots in my office, where I’ve been writing about Howard, about our lives together, and our times together and apart, in the seventies and eighties. As I talk into the microphone that he taped inside my black T-shirt, my voice becomes foggy, mumbled, and congested. While he and his crew discuss cutaways and finishing the scanning shots of the bookshelves, where some photographs of Howard stare back, I focus, inappropriately, like a perplexed kid, on a mourning dove on the fire escape.

And then they’re gone. But they brought with them a pang that had not been there when I’d been writing by myself, for several months, trying to recall the past, as if it were a dream that I was recording, like a novel, with these characters Brad and Howard, and some other more famous characters like Andy or Bill or Madonna, names that felt italicized as I typed them out. When I was in the
eighth grade I won a contest for memorizing and speaking in dramatic German a poem by Heinrich Heine that included lines about a sad song from olden times that the poet just couldn’t get out of his head—
Das kommt mir nicht aus dem Sinn
. Aaron’s crew brought with them that caliber of queasy sensation, and it hurt more than expected and I couldn’t shake it. Now I remember. The first lines were, “I don’t know what it means that I’m so sad,” so
traurig
.

Why? It must have been the equipment. Howard was a film director, whose career was just taking off when we met, and kept on the ascent from then on. The night that I first saw him, at a gay bar called the Ninth Circle, in 1978, he’d arrived with his crew. They were working on his student thesis film on William Burroughs for the NYU film school. Howard and I stumbled into the back after we’d met for him to write down his number, and there they were, a bunch of straight guys, sitting at a table, drinking beers from little glasses that looked almost dainty in their hands. Stacked on the table, and on chairs, were boom mikes, and tripods, and silver gaffer tape, and a big—I guess—video camera. (I didn’t know then and I don’t know now.) They were with us, from then on—not those same guys, but always some gaffer, and some sound guy, and a lighting technician. And here they were again: his nephew, seven when Howard died, now the father of Dylan, living in London; a guy with nerdy glasses, from Brooklyn; and a German, with wavy brown hair, aloof, who went off to roll his own cigarettes and obliviously smoke.

I can’t blame them. Nor are they the only bringers of eerie vibes. I bring them on myself all the time. Not when I’m trying to write things down—the cure—but the rest of the time, in between. From my apartment, I catch sight across Twenty-third Street of the top-
floor dormers and ivy-covered brick chimneys and steeple towers of the Chelsea Hotel, sometimes through a bedroom window, sometimes a kitchen window, sometimes reflected in a bathroom-door mirror, or sun-dappled in the late afternoon, ricocheting off my office door. Howard and I lived at the Chelsea for three years. When I walk by each morning on my way to the gym, I always clock our fifth-floor front room, with French doors and balcony. I see the “O” in the “Hotel” sign, and remember it looming in black-and-white photographs of my thirtieth-birthday party. The little guitar store was briefly a photocopy shop that we ran. Now, like a metaphor of demolition and expropriation, the hotel has been vacated, its walls stripped, wiring replaced, our old windows boarded up, the place being revamped as a serious luxury hotel rather than a bohemian folly.

You can’t get there from here. Nor would I want to. I’m not nostalgic, just shocked. Shocked at the difference between then and now. It’s not simply a pleasant reverie to think back on those times, no recollecting in tranquility. It’s more like a smash cut, that editing option so favored by Howard and other film-school students during the seventies: splicing one image or event up against another totally unrelated image or event. I’m looking out at Memory Hotel from the bedroom of the apartment in a co-op that I share with my husband, Paul.
Husband
. Now, that is a smash cut. When Howard and I were together in a complex fandango that included living together, and living separately, and being monogamous, and pursuing three-ways, or separate boyfriends, the option of two men having a legal marriage, recognized under state law, did not even remotely exist. We were boyfriends, or lovers, or friends with a capital F, but not husbands, or even partners. No event horizon for such a life choice was at all visible. Paul and I have been together eleven years,
married for one. We have matching gold wedding bands that we bought together at Tiffany’s. The two married gay guys downstairs have a baby girl they wheel up and down Twenty-fourth Street in a stylish baby carriage. Sometimes Paul and I, too, talk about surrogates, and egg donors, and adoption, and sperm-count analysis.

When I started writing down my memories, I was contemplating recording the fabulous times of my youth, the golden age of promiscuity, when I came to New York and everything was sex and poetry and
La Bohème
for suburban American kids arriving to create their identities, and do drugs, and get laid. In a way, it was a response to the curiosity of young gay guys, who often ask me some version of, “Oh, tell us what it was like in the seventies.” Again, because this present for them seems so smashed up against that past. “Well . . .” I begin, in a portentous tone, “back in the day, there were no cell phones. To make a call you dropped a dime in the phone booth at the corner. No online hookup sites, either, just bars. New clubs were always opening in abandoned warehouses, or down a flight of steps into a cellar, or up a freight elevator. No one seemed to have a job. . . .” Eventually I get around to telling more of the good stuff.

Frank O’Hara was a big figure for me, for us. Lots of us read his poetry in small towns in America, and came to Manhattan, as I did, in 1971, to become poets like Frank O’Hara, or painters, or anything to do with art, and creativity, and politics, too. O’Hara once wrote, of politics, that “the only truth is face to face.” I discovered while trying to write this handheld narrative of those lost years that when the heady buzz subsided, and the sun came up, as it did every morning in those decades, too, I would picture Howard Brookner’s alert face. History is face-to-face, too. There is no way for me to separate out the story of the fabulousness and horror of the
years from 1978 to 1989, and a little before and a little after, from Howard—my lover, or my boyfriend, or Friend, or whatever we were to each other. Writing down my own lyrics to that song that I can’t get out of my head, I wind up coming back to Howard, as that era for me always meant coming home to Howard, whatever “home” meant for us. If I were forced to choose one trait that defined us, and our generation, and those times, I’d have to say that we were romantics. It was a romantic time. The history I’m left with turns out to be of Howard and Brad, face-to-face, with some very interesting, very lively action going on in the deep background.

Three Fur All by Crymsyn Hart
Here Comes Trouble by Michael Moore
Angel Unaware by Elizabeth Sinclair
Until He Met Meg by Sami Lee
Motherhood, The Second OldestProfession by Erma Bombeck
To Summon a Demon by Alder, Lisa
On My Own by Melody Carlson
A Natural History of Love by Diane Ackerman
Kate and the Wyoming Fossil Fiasco by Janice Hanna
Dragon Bones And Tombstones (Book 2) by Craig Halloran