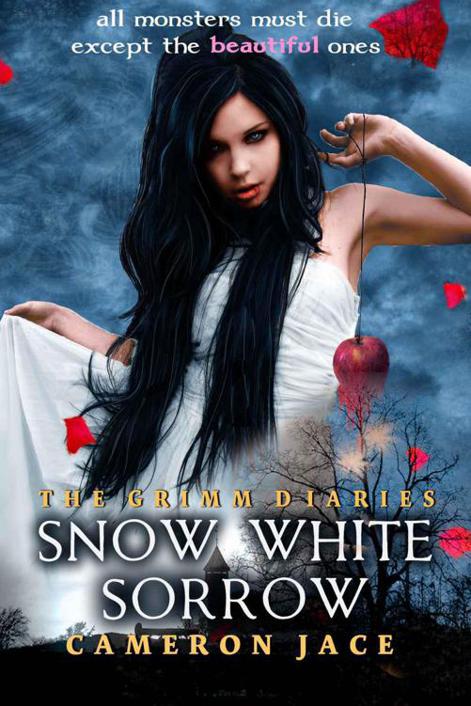 All historical facts about the Brothers Grimm, vampires, and timelines are true. Of course, The interpretations and fantasy elements aren’t. They are the author’s imagination.

It’s safe to say that this book wouldn’t have been possible without the awesome readers and fans who have supported me every step of the way. I actually tried to make a list of their names, and it filled out more than ten pages. So although I can’t thank you by name, you know who you are and what you mean to me. I am more than lucky to have you.

However, I ought to thank three supporters who weren’t only supportive but have worked hard helping me out, even before this book came out. I’d start with my great friend and editor, Danielle Littig who believed in the stories from first glance and did her best to make them better. Also, Susan Hocking, a writer, editor, and first reviewer ever. She believed in the stories when they were still ripe and confusing and never gave up. Last but not least, my current editor Melody Benton who worked on the book as if it was hers. She’s been awake many sleepless nights, not only editing but loving the story and picking up wrong timelines and plots then helping me make them better. Thank you.

‘I guess you think you know this story.

You don't. The real one's much more gory.

The phony one, the one you know

Was cooked up years and years ago

And made to sound all soft and sappy

Just to keep the children happy’

‘She'll sting you one day, Oh, ever so gently, so you hardly ever feel it. 'Til you fall dead.’

‘Have you ever been in love? Horrible isn't it?

It makes you so vulnerable’

1
The Boy Who Is A Shadow

5
The Train of Consequences

9
The Swamp of Sorrow

10
Scariest of Them All

20
A Prison of Pearls

21
She Who Must Be Obeyed

23
A Kingdom of Sorrow

25
The Queen of Sorrow

26
What Dreams May Come

The Boy Who is a Shadow

The children of the town of Hamlin loved Charmwill Glimmer, famously known for being the greatest storyteller in the world. Unlike Santa Claus, Charmwill didn’t walk around with a sack full of gifts and wonders. Instead, he arrived with a parrot on his shoulder. The children giggled because they knew that it wasn’t an ordinary parrot. It was an enchanted book, which carried almost every fairy tale ever told.

Before Charmwill began reading, the parrot’s green wings magically transformed into the book’s cover, the yellow feathers turned into pages the color of old treasure maps, its backbone into the book’s spine, and its claws laced together into an obsidian lock that guarded the tales between the pages.

Charmwill unlocked the book by knocking on the parrot’s beak, which now stuck out of the middle of the book’s front cover like a doorknob. He knocked five consecutive times on it:
tic-to-tic-tac-toc!

Once opened, Charmwill rested the book on his lap. Then he pulled out a golden comb and smoothed his long silver hair and beard with his hand. The children enjoyed playing with his beard, pulling it slightly and feeling its cottony texture. Charmwill didn’t mind. He joked that if he ever shaved it, he’d turn it into a marvelous pillow they could rest their heads upon while listening to his bedtime stories.

When the children had enough playing, Charmwill read them the most wonderful tales from his enchanted book, which he called the Book of Beautiful Lies.

But the tales also had other elements the children liked. They told of scary things like vampires, werewolves, demons, monsters, shape shifters, boogeymen, secret societies, and forbidden powers which they had never heard of in fairy tales before. It was what made Charmwill’s stories fantastic, fabulous, and their favorite.

Between chapters, Charmwill Glimmer smoked his pipe. It was a special pipe, filled with Dragonbreath, which gave him certain powers. Like wizards had their own powers to face their enemies, the world of storytellers was the same, if not more interesting and adventurous. There were dark forces that didn’t want the world to know the truth about the fairy tales in Charmwill’s book. These evil forces were looking for him so they could steal it, but the man was smart and hard to find. He’d even called it The Book of Beautiful Lies to elude them, for in reality, the book didn’t tell lies, but only the untold truth about fairy tales.

“I love your fairy tales, Mr. Charmwill,” a little boy said. “They’re unlike the stories my grandma told me.”

“That’s because your grandma leaves out the scary parts,” Charmwill took a drag from his pipe, “which are the awesome parts.”

“Your stories are so much fun,” a little girl said while sitting among the other kids around the fire. “They’re like poisoned apples. Once you taste them, you will never think of fairy tales the same way again.”

Sometimes, Charmwill picked one of the parrot’s feathers and used it as a quill for writing in the book. He used a peculiar ink, which looked like blood. When the children asked him why the stories he collected were written in blood, Charmwill said it was an ancient tradition to remind the storyteller that fairy tale characters weren’t fictional. In fact, they were real enough they could bleed.

“So why can’t we meet them?” a boy asked, resting his head on his bent knees.

“Because they aren’t awake yet,” Charmwill said.

“How long will they stay asleep?” one of the kids asked.

“That’s a long story. All you need to know is that the fairy tale characters were cursed into an eternal sleep centuries ago. They can only wake up for a little time every one hundred years, and that’s when you can meet them.”

“You mean the way Sleeping Beauty was cursed to sleep for a hundred years?” a girl asked.

“Yes, indeed,” Charmwill chuckled. He loved smart children for they usually figured out things much faster than the adults. “It’s called the Sleeping Death,” Charmwill whispered, drawing a serious face.

“So how soon until they wake up again?” another boy asked.

“It’s just about time they do,” Charmwill glanced at his pocket watch, which showed a sun and a moon inside “In about a year from now, they will all wake up again in our world. Not all of them will remember who they are, though.”

“Can’t we remind them?” a girl suggested.

“I wouldn’t recommend that,” Charmwill said. “There is a big war going on in the fairytale world. Besides, many of them have become wicked and dangerous. We might not want to wake those characters up.”

“Or the witch from Hansel and Gretel?” a boy asked.

“And many more,” Charmwill said. He looked as if he remembered something that happened long ago but couldn’t forget. “Actually, some of the fairy tales we think of as the loveliest have become the scariest, and the other way around.”

After Charmwill finished reading, he locked the book and threw it in the air, watching the pages flutter like a bird’s wings then transform into a parrot again. The children clapped their hands as if he were a magician showing them his latest trick.

Charmwill called his parrot Pickwick. It was mute.

The children were sad that Charmwill and Pickwick had to leave for another town to tell more tales.

“Do you really have to go, Mr. Charmwill?” a little girl asked him, pulling on his cloak.

“Yes, I have to,” he said. “Old Charmwill Glimmer has to take care of other kids, too. I also have to seek and collect more tales so I can read them for you next Christmas.”

“So you’re going to visit us the same time Santa Claus does?” a girl with a lisp, asked. Charmwill liked the sound of the words
Thanta Clauth
on her lips.

“Maybe,” Charmwill tilted his head. “I’d really like to talk to him about sneaking into people’s houses without permission.”

Some of the children snickered.

“We like you better,” said a girl with a missing front tooth. “We never get to meet Santa in person, but you, we can see and talk to, which is much better.”

“Can’t you at least tell us where you’re going? We could sneak out of this awful town and visit you wherever you are,” a boy suggested.

Sighing, Charmwill tucked his hand-held reading glasses in his pocket, rubbed his puffy eyes, stood up using his cane, and lit his Dragonbreath pipe again. “I’m afraid you can’t come with me because I am going to sail to a faraway place.”

“Does it have an address?” the kids asked.

“But of course, it does. It’s located East of the Sun, West of the Moon,” Charmwill explained.

“East of the Sun, West of the Moon?” the children wondered. “How can we get there? You have a map?”

“It’s really hard to find, and no map can get you there. Only a few special people, like fairy tale characters, know about it.”

“Wow!” the children’s eyes widened. “Are there other children like us there?”

“Yes, only a little older,” Charmwill nodded. “I am going to look for a very special boy there.”

“Yes, the Boy Who is a Shadow,” he whispered to the children. “But don’t tell anyone, not even Santa. It’s our secret.”

The children cupped their hands over their mouths as if it was the only way they could keep such a secret. No one had ever shared secrets with them before, and they weren’t sure they could keep one.

“Why is this boy so
thpethial
?” asked the lisping girl.

“Because he might be able to save the Fairyworld,” Charmwill said.

“From whom?” they asked.

“From
her
, I prefer not to say her name,” Charmwill puffed his pipe then coughed. He’d never been fond of talking about her, and it always got colder when her name came up. Even though he hadn’t revealed her name, the children felt a sudden chill fill the air. A crow cawed somewhere while the trees rustled around them. The Children took a step away from Charmwill as if they’d sensed her vicious presence on his breath.