Read So Much It Hurts Online

So Much It Hurts 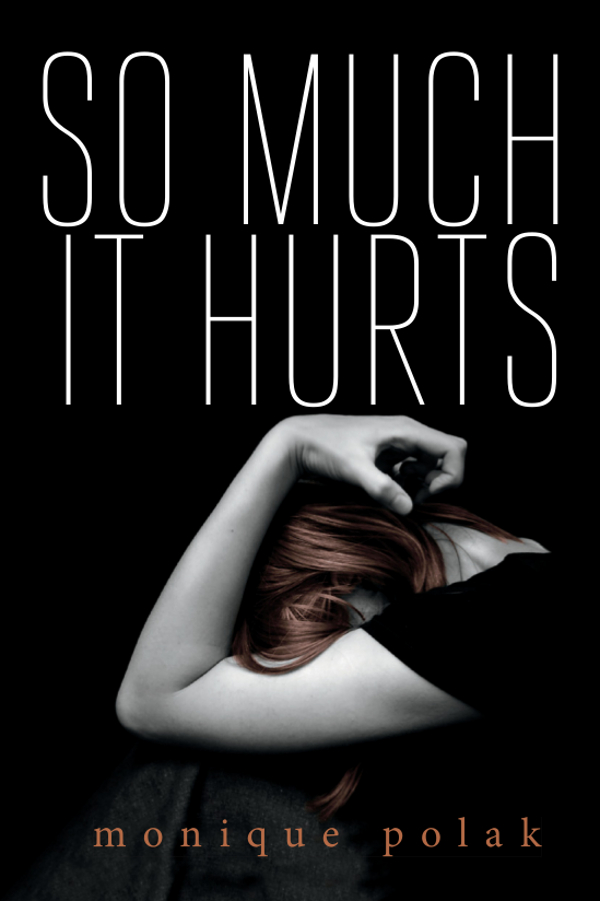 SO MUCH
IT HURTS

SO MUCH
IT HURTS

All rights reserved. No part of this publication may be reproduced or transmitted
in any form or by any means, electronic or mechanical, including photocopying,
recording or by any information storage and retrieval system now known
or to be invented, without permission in writing from the publisher.

Polak, Monique
So much it hurts [electronic resource] / Monique Polak.

Summary
: A teen actress gets involved with an older director, whose explosive temper
and controlling behavior threaten to destroy her life.

Orca Book Publishers gratefully acknowledges the support for its publishing programs
provided by the following agencies: the Government of Canada through the Canada Book
Fund and the Canada Council for the Arts, and the Province of British Columbia
through the BC Arts Council and the Book Publishing Tax Credit.

For all the young women who see themselves in Iris,
and for the people who love them
and want to know them bette
r

“I have a daughterâhave while she is mineâ¦”
â
HAMLET,
ACT 2, SCENE 2

I
can feel myself becoming Ophelia.

My shoulders drop, my face softens. The rows of orange lockers grow blurry, until they're not lockers anymore.

I'm in Elsinore, in Denmark, far away and long ago. I'm wandering outside the gray stone walls of the royal palace. The orange is the sun as it rises over the ramparts. I cross my hands over my heart.

I never knew my mother, who died when she gave birth to me, and yet, with every breath I take, I miss her. No wonder that my father, Polonius, and my brother, Laertes, have been my everything.

“Hamlet!” I don't mean to say his name out loud. Or to moan.

It happens when I'm getting into character. What's weird is how much I like turning into somebody else. I think it's because being me isn't exactly fascinating.

I'm in grade eleven at Westwood. I study hard; I make honor roll every term. Sundays, I waitress at Scoops. I've got a sort-of boyfriendâsort-of since I'm not sure I want him. At home, it's just me and Mom. My father left the country when he and Mom split up. I was four. I haven't seen him since. All Mom will say is there are complicated reasons why he can't visit. I guess the most interesting thing about me is that more than anything, I want to be a professional actor. Most people I know (including my mom) think it's a terrible idea. They think I should have a Plan B. I say, why can't I have my Plan A?

If I had to sum up in one sentence what my dilemma is, the way a plot gets summed up on a Broadway playbill, here is what I'd say: Iris Wagner is waiting for her life to begin.

“I-ris, you total ditz!” When Katie nudges me, I nearly lose my balance, making me feel like even more of a ditz. “Are you talking to yourself again? Hey, I meant to ask youâdid you do your chemistry homework?”

What Katie really means is will I let her copy my assignment. Katie is not the academic type. She's more the clubbing type.

I can't believe how much makeup she's wearing today. Her eyes are rimmed in purple pencil, her eyelids are smoky gray, and her lips are glossier than her patent clutch. She signed up for Theater Workshop too, but only because it means she can do makeupâand because it lets her start school late on Fridays. Thursday is ladies' night at the clubs on Crescent Street (which means ladiesâeven underage ones with fake
ID
sâget in free). Katie needs Friday mornings to recover.

We have Theater Workshop in the basement at Westwood, just past the lockers. Our theater teacher, Ms. Cameron, helped design the space. The acoustics are amazing, and there's a giant wooden stage with state-ofthe-art lighting and thick plum-colored velvet curtains that
swish
when they open. That
swish
is one of the reasons I want to be an actor.

That
swish
means the show is about to beginâand I love beginnings. Beginnings of movies, of books, of meals. Beginnings are when everything is possible, when nothing's gone wrong yet. It's middles and endings I have trouble with.

I tried explaining this to my mom the other night, but she didn't get it. “You want to become an actor because you like the sound the velvet curtains make?” She shook her head. “It's one thing to follow your heart, Irisânot that following my heart worked out too well for meâbut in this day and age, a person needs to be practical. You don't want to keep working in that ice-cream parlor for the rest of your life, do you? And chances are, if you really do try to become a professional actor, that's where you'll end upâ waitressing between auditions. I'm not saying you should give up acting or that you're not talented. Acting can always be your hobby, Iris.”

The other students are filing into Theater Workshop now too. There's Lenore, who's playing Gertrude. It's a bigger role than mine, but Gertrude's a bitch (so's Lenore, making her perfect for the part). I like Ophelia way better. Ophelia has soul. She cares about people and she loves with all her heart. She'd never get it on with her sleazy brother-in-law the way Gertrude did.

Lenore's with Antoine, Katie's ex, whom Katie no longer speaks to. “He's dead to me,” she said after they broke up. She slid the back of her hand across her forehead. For someone who's not into Theater Workshop, Katie can be quite dramatic. Behind them is Tommy, the boyfriend I don't think I want.

Tommy waves. I feel obliged to wave back. When he realizes we haven't left him room on the bench, his shoulders slump. Which makes him look sad. Which makes me feel guilty. Which makes me think I definitely don't want him for a boyfriend. Not now. Not ever. Even if he is niceâand decent-looking. Even if Mom approves.

If we're taking notes in Theater Workshop, we sit on the stadium benches where the audience sits during performances. Luckily, there isn't much theory. We don't even use a textbook. Ms. Cameron believes in what she calls the “experiential approach,” which means we mostly do on-the-spot exercises and rehearse. Ms. Cameron says people learn more from their own experience than they do from books.

Ms. Cameron has someone with her today. A lanky guy with a soul patch is watching us from the corner of the room. I like how he's dressedâgray fedora, gray plaid shirt and skinny black jeans. When his eyes land on me, I straighten my back. I know my posture sucks. When the visitor's gaze shifts to someone else, I feel disappointed.

Ms. Cameron is about thirty. She was a child actress, and she still has many friends who are actors. The lanky guy is probably an actor too, though I don't recognize him. Maybe he's from the Concordia University theater program, or he could be a drama specialist from out of town. Ms. Cameron won a prize for excellence in teaching, and visitors sometimes come to watch her work. I guess she's still performing, even if she gave up acting long ago to become a theater teacher.

Katie says Ms. Cameron must've peaked when she was ten, and her career went south after that. I hate when Katie badmouths Ms. Cameron.

Ms. Cameron claps. “Today,” she says, “I want you to slap yourselves.”

I'm not sure I've heard right, but then Ms. Cameron repeats herself. “Slap yourselves.”

“Of course it's a good idea, Antoine. They're the only kind I get.” Ms. Cameron throws her head back when she laughsâand I notice her exchange a look with the guest. “Well then, go ahead,” she says, turning back to us. “Use both hands. Start with your foreheads and cheeks; make your way down to your toes.”

Ms. Cameron closes her eyes to demonstrate. Leave it to Ms. Cameron to make slapping herself look sexy. As usual, her long blond hair is tied back in a ponytail, and she's wearing all blackâblack tank top, black tights and a slinky black skirt. When she slaps herself, it's like she's playing drums, only the drums are her body. “This is a marvelous way to get the blood flowing,” she says, her eyes still closed.

At first, there's some laughterâthis happens a lot during Ms. Cameron's warm-ups, and then we all (even Antoine) start slapping ourselves. My body bristles at the first slap, but I'm careful not to slap myself too hard. Soon I feel my body waking up, coming to life in a way I'm not used to.

I don't know where Ms. Cameron gets all her ideas. She never uses the same warm-up twice.

“Now,” Ms. Cameron says, “I want you to find a partner and take turns slapping each other. Gently. We never hurt each other in Theater Workshopâor anywhere else.” Her eyes meet the visitor's again.

Katie shimmies over. “Hey, partner.” She lowers her voice. “I came to save you from Tommy. You owe me. You can repay me in chemistry assignments.” When Katie raises her hand to slap me, I back away. That cracks her up. “What do you think I'm going to do?” she asks. “Beat up my bestie?”

Katie must not know her own strength, because the whack she gives me makes my cheek smart. “Hey,” I say, rubbing the skin, “that hurt!”