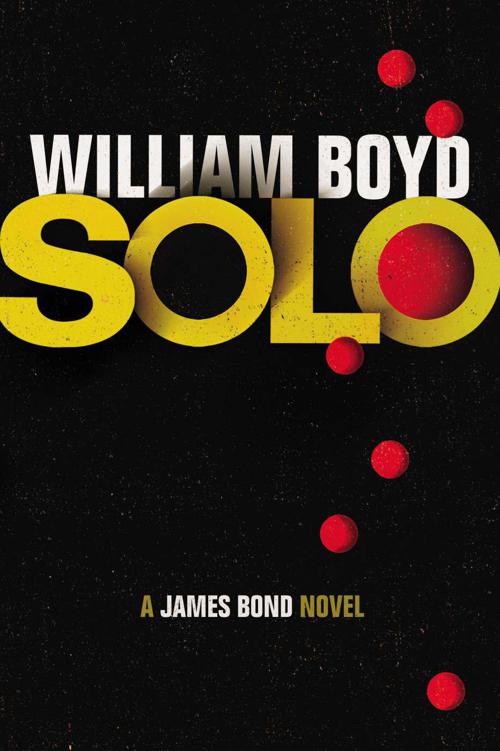 Part One: Breaking and Entering

Part Two: How to Stop a War

8. The Man with Two Faces

14. The Battle of the Kololo Causeway

Part Four: The Land of the Free

It is 1969 and James Bond is about to go solo, recklessly motivated by revenge.

A seasoned veteran of the service, 007 is sent to single-handedly stop a civil war in the small West African nation of Zanzarim. Aided by a beautiful accomplice and hindered by the local militia, he undergoes a scarring experience which compels him to ignore M’s orders in pursuit of his own brand of justice. Bond’s renegade action leads him to Washington, D.C., where he discovers a web of geopolitical intrigue and witnesses fresh horrors.

Even if Bond succeeds in exacting hiss revenge, a man with two faces will come to stalk his every waking moment.

William Boyd is the author of one work on non-fiction, three collections of short stories and thirteen novels, including the bestselling historical spy thriller
Restless
– winner of the Costa Novel of the Year – and
Any Human Heart
, in which the character of Ian Fleming features. Among his other awards are the Whitbread First Novel Prize, the John Llewellyn Rhys Prize, the James Tait Black Memorial Prize and the Prix Jean Monnet. He is a Fellow of the Royal Society of Literature and an Officier de l’Ordre des Arts et des Lettres. In 2005, he was awarded the CBE.

Born in Ghana in 1952, William Boyd spent much of his early life in West Africa. He now divides his time between the south-west of France and Chelsea, where he lives a stone’s throw from James Bond’s London address.

S
TARS AND
B
ARS

T
HE
B
LUE
A
FTERNOON

Not for these I raise

The song of thanks and praise;

But for those obstinate questionings

Of sense and outward things,

Fallings from us, vanishings;

Blank misgivings of a Creature

Moving about in worlds not realised . . .

In the writing of this novel I have been governed by the details and chronology of James Bond’s life that were published in the ‘obituary’ in
You Only Live Twice
. The novel was the last to be published in Ian Fleming’s lifetime. It is reasonable to assume, therefore, that these were the key facts about Bond and his life that he wanted to be in the public domain – facts that would cancel out various anomalies and illogicalities that had appeared in the earlier novels. Consequently, as far as this novel is concerned, and in line with Ian Fleming’s decision, James Bond was born in 1924.

PART ONE
BREAKING AND ENTERING
·1·
IN DREAMS BEGIN RESPONSIBILITIES

James Bond was dreaming. Curiously, he knew at once where and when the dream was taking place – it was in the war and he was very young and was walking along a sunken country lane in Normandy, a dirt track between dense blackthorn hedges. In his dream, Bond turned a corner and saw, in a shallow ditch at the side of the muddy roadway, the sodden bodies of three dead British paratroopers, clumped together. In some shock, he paused instinctively to look at them – they seemed in their huddled inert mass to be part of the earth, in a strange way, some vegetable growth germinating there rather than human beings – but an angry shout from the rear told him to keep moving. Beyond the ditch a farmer strode behind his team of two toiling shire horses, busy ploughing his field as if the war were not taking place and these dead men and this small patrol of commandos walking uneasily and watchfully down his farm lane had nothing at all to do with his life and work—

Bond woke and sat up in bed, troubled and disturbed by the dream and its intense vividness and eerie precision. His heart was beating palpably, as if he were still walking down that muddy track past the dead paratroopers, heading for his objective. He thought about the moment: he could identify it exactly – it had been the late morning of 7 June 1944, a day after the invasion of France – D-Day plus one. Why was he dreaming about the war? Bond rarely ventured into the haunted forest of memory that made up his recollections of that time. He ran his hands through his hair and swallowed, feeling his throat sore, sharp. Too much alcohol last night? He reached over for the glass of water on his bedside table and drank some mouthfuls. He lay back and further considered the events of 7 June 1944.

Bond smiled grimly to himself, slid out of bed and walked naked into the en suite bathroom. The Dorchester had the most powerful showers in London and as Bond stood under the needle jets, feeling his skin respond to the almost painful pressure, he sensed the traumatic memories of that day in 1944 begin to retreat slowly, washed away. He turned the tap to cold for the last twenty seconds of his shower and began to contemplate breakfast. Should he have it in his room or go downstairs? Downstairs, he thought, everything will be fresher.

Bond shaved and dressed in a dark blue worsted suit with a pale blue shirt and a black silk knitted tie. As he tightened the knot at his throat more details of his dream began to return to him, unbidden. He had been nineteen years old, a lieutenant in the Special Branch of the Royal Naval Volunteer Reserve, attached as an ‘observer’ to BRODFORCE, part of 30 Assault Unit, an elite commando charged specifically with the task of capturing enemy secrets: documents, files and encoding devices – all the legitimate plunder available in the aftermath of battle. Bond was in fact looking for a new variation of a
Wehrmacht
cipher machine, hoping that swift advance would create surprise and pre-empt destruction.

Various small units of 30 AU were landed on the Normandy beaches on D-Day and immediately thereafter. BRODFORCE was the smallest of them, just ten commandos, with an officer, Major Niven Brodie – and Lieutenant Bond. They had stepped ashore from their landing craft an hour after dawn at Jig Sector on ‘Gold’ beach and had been driven inland in an army lorry towards the country town of Sainte-Sabine, close to the Chateau Malflacon, the SS headquarters of that region of Normandy. They left their lorry with a forward unit of Canadian infantry and advanced on foot, down the deep narrow lanes of the Normandy
bocage
, into the fastness of the countryside. The push inland from ‘Gold’ had been so speedy that there was no front line, as such. BRODFORCE was leapfrogging the British and Canadian forces and racing with all speed for whatever booty might be waiting for them in the Chateau Malflacon. Then they had seen the dead paratroopers and it had been Major Brodie himself who had shouted to Bond to keep moving . . .

Bond combed his hair, smoothing back the forelock that kept falling forward out of position, as if it had a life of its own. Maybe he should change his hairstyle, he wondered, idly, like that television-presenter fellow – what was his name? – and comb his hair forward in a short fringe, not bother with a parting at all, in the contemporary fashion. No, he thought,
pas mon style
. He swallowed again – his throat
was
sore. He left his room, locking the door behind him, and wandered down the corridor, heading for the lift. He pressed the button to summon it, thinking, yes, scrambled eggs and bacon, many cups of coffee, a cigarette, that would set him on his feet again—

‘Good morning,’ a woman’s voice said from inside.

‘Morning,’ Bond replied automatically as he stepped into the lift. He recognised the unforgettable scent immediately – the vanilla and iris of Guerlain’s ‘Shalimar’ – unforgettable because it was the perfume his mother used to wear. It was like opening a door to his childhood – so much of his past crowding in on him today, Bond thought, looking over to meet the eyes of the woman leaning in the corner. She smiled at him, quizzically, an eyebrow raised.

The Blake Legacy (The Blake Boys) by Laurel, Rhonda
Find Me by A. L. Wood
Friends and Lovers by Tara Mills
Shenandoah by Everette Morgan
The Fall by John Lescroart
Longing for Kayla by Lauren Fraser
The London Train by Tessa Hadley
Kissing Mr. Right by Michelle Major
A Deadly Restoration (Julia Blake Cozy Mystery Book 2) by A Deadly Restoration
Salvatore: a Dark Mafia Romance by Natasha Knight