Read Somebody to Love? Online 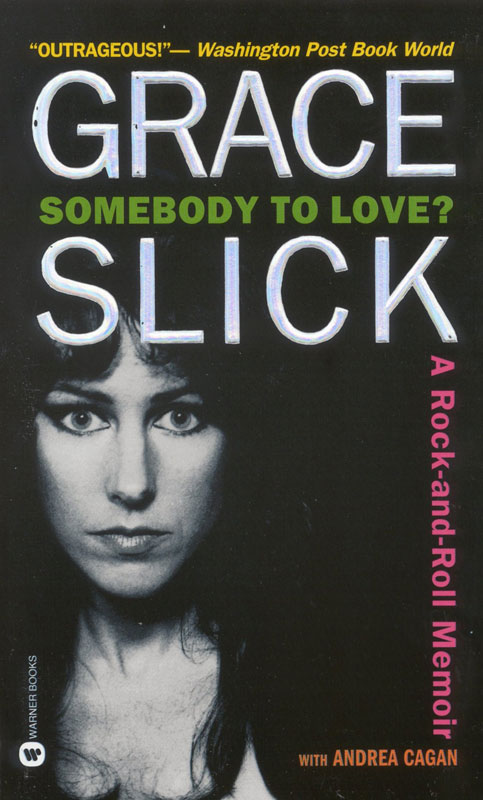 If you purchase this book without a cover you should be aware that this book may have been stolen property and reported as “unsold and destroyed” to the publisher. In such case neither the author nor the publisher has received any payment for this “stripped book.”

The author and publisher gratefully acknowledge permission to reprint the following material:

Lyrics from “Somebody to Love,” by Darby Slick. Copyright © Irving Music. Used by Permission.

Lyrics from “Comin' Back to Me,” by Marty Balin. Copyright © Icebag Corp. Used by Permission.

Lyrics from “Third Week in the Chelsea,” by Jorma Kaukonen. Copyright © Icebag Corp. Used by Permission.

Lyrics from “Do It the Hard Way,” by Grace Slick. Copyright © Ronin Music. Used by Permission.

Lyrics from “Panda,” by Grace Slick. Copyright © Helmets Without Heads. Used by Permission.

1: The Beautiful Blonde from Bashful Bend

9: What to Do with a Finger Bowl

18: Knobs and Dials and Wires

24: Ladies (and Gentlemen) of the Canyon

52: Rock and Roll and Aging

The World According to Grace

“I've enjoyed the accommodations offered by police departments from Florida to Hawaii. Any time I saw a badge, something in me would snap.”

“Jim Morrison was a well-built boy, larger than average, and young enough to maintain the engorged silent connection right through the residue of chemicals.”

“In Germany I ingested the entire contents of the hotel minibar before a show and stuck my fingers in this guy's nostrils because I thought they would fit.”

“The first words I ever heard the alcohol rehab counselor say were ‘Good morning, assholes!’ With that, I liked him right away.”

“IT'S HARD NOT TO ADMIRE HER VERVE AND SASS.”

“Provides fascinating backstage glimpses into the halcyon days of hippiedom.”

“A fascinating journey … as outrageous and shocking as the days when she used to lift her top to flash a crowd.”

“Slick tells her story with unflinching candor and humor.”

“An enjoyable psychedelic pastry, a look back at rock's game of musical beds, and a report on the life's ups and downs (and other drugs).”

—Jerry Hopkins, coauthor of
No One Here Gets Out Alive

—Pamela Des Barres, author of
I'm with the Band

“I always loved Grace Slick's talent. Until I read this book I didn't know I loved her wisdom and humor as well.”

“Slick can't help being somebody to love—she's smart, sarcastic as ever, and ceaselessly funny … [with] a load of wonderfully colorful stories to tell. … A page-turner throughout.”

“Frank … highly entertaining. … The era of free love has never been better chronicled.”

“Finally, the last great rock-and-roll story … a smart, well-written tale, told as if it's been shot out of a cannon.”

—Steven Gaines, coauthor of
The Love You Make: An Insider's Story of the Beatles

“Quite entertaining … Slick's language is so strong it might even make Kenneth Starr blush.”

“Bawdy, boisterous … the unvarnished gospel from a woman guided by passion and freedom of expression.”

China Kantner, for being exactly who she is

Mom and Dad, for giving me so much more than existence

Chris Wing, for seeing with a child's eyes

Paul Kantner, for humor and invaluable help with my arbitrary memory

Andrea Cagan, for her friendship, her open heart, and her open mind

Brian Rohan, for introducing me to my agent

Maureen Regan, my agent, for talking me into doing this book and getting the “big bucks,” respectively—and for her boundless energy in both personal and business situations

Rick Horgan, my editor, for his suggestions and for letting me play

The Great Society, Airplane, and Starship groups and all associates, for their talent and support

Sister Pat Monahan, for Bucky and for her ability to listen

Ron Neiman, for beautifying the outside and putting up with the inside of my head

Justin Davis, for his unique self and his photograph

And of course, to all the people who've followed our music through the years

In writing this book, my cowriter, Andrea, and I
first
attempted to proceed by having her ask me questions, after which she'd go to her computer, armed with notes, and construct a scenario around a sentence or paragraph taken from our conversations. The results were sounding disjointed, so we tried a different tack.

The second, ultimately successful method involved Andrea's giving me a foundation for each chapter by providing a list of topics she'd heard me discuss, at which point I'd write down my recollection or interpretation of that aspect of my life. Andrea (being the pro) then organized my thoughts and my horrendous punctuation. I can construct an interesting scene and create plausible dialogue, but distinguishing between colons and semicolons has always struck me as something akin to gastrointestinal surgery.

Yup, these are my words, with the help of the runway, the mechanic, and the control tower.

By the way, several of the names in this story have been changed to protect the guilty.

The Beautiful Blonde from Bashful Bend

I
t's Chicago, 1973. Jefferson Airplane is tuning up and I'm standing onstage getting ready to sing. Some guy in the audience stands up and shouts, “Hey, Gracie—take off your chastity belt.”

I look directly at him and say, “Hey—I don't even wear underpants.” I pull my skirt up over my head for a beaver shot, and the audience explodes with laughter. I can hear the guys in the band behind me muttering, “Oh, Jesus.”

My response to that particular heckle was actually pleasant compared to what I did in Germany, four or five years later, when I was so drunk, I went up to a guy sitting in the front row and picked his nose. It was the night before I left the band for the first time. To be more accurate, I fired myself. Fed up for a variety of reasons I'll discuss later, having ingested the entire contents of the minibar in my hotel room before I arrived at the venue for the show, I stuck my fingers in this guy's nostrils just because I thought they'd probably fit. Luckily, the majority of that particular German audience had never seen us before, so they must have figured we were some kind of punk band and just let it go.

Why did Grace Wing, a well-educated, contented girl who grew up in a
Leave It to Beaver
household, ultimately embrace such a maverick persona?

Well, sarcasm was always a family trait, but the
real
reason for my tendency toward raucous behavior can best be explained by a 1949 film that I watched when I was a young girl. I recently saw a rerun, and it was all right up there on the screen: a combination of humor and fantasy that was especially appealing to a young child looking for a Technicolor reality.

When I was between the ages of five and nine, the soldiers of the Second World War wanted to
have
Betty Grable, but I wanted to
be
Betty Grable. She was the epitome of an alluring woman; she had it all as far as I was concerned.

My mother told me, “She's got caps on her teeth, bleached blonde hair, and no talent.” Mom, being a natural blonde with a mouth full of perfectly straight teeth, was feeling some resentment. But Miss Grable could have been head-to-toe Styrofoam for all I cared. Whatever it was, it worked for me. When I saw that movie, I figured I had all the information I needed to ride through life like an armored blonde goddess.

The opening shot of
The Beautiful Blonde from Bashful Bend
takes place in 1895 in a small western town. Betty's in jail, still in the fabulous outfit she was wearing for her evening's saloon singing. She's only slightly put out by being in the slammer, and a friend tells her, “Don't worry, you'll be out in minutes. Nobody liked the guy you shot, anyway.”