Read Someone in the House Online

Someone in the House 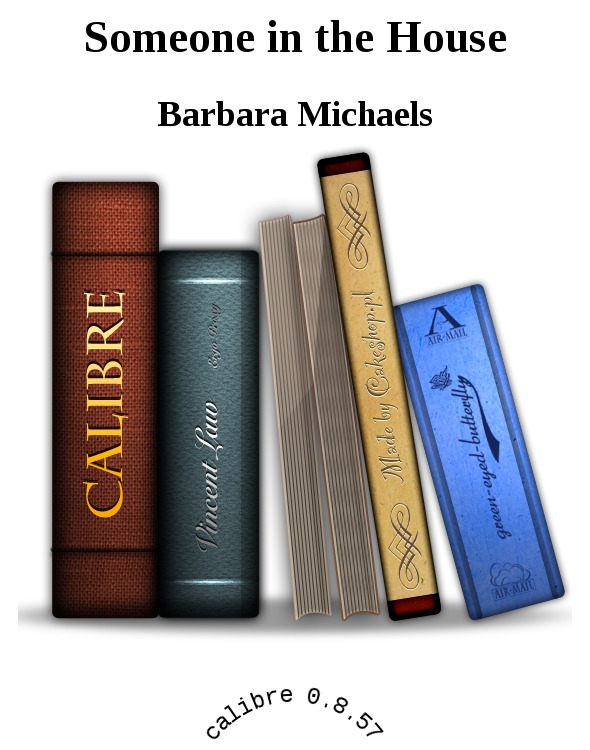 Someone in the House

GOD ONLY KNOWS how it all began. After all the…

TWO WEEKS LATER I was hopelessly lost in Pennsylvania. The…

THE CAT WOKE ME next morning, standing on my stomach…

REREADING what I have written so far, I am tempted…

BEA HAD A DATE to go sightseeing with Roger next…

THE OLD STONE INN, five miles west of us, was…

I SHOULD HAVE been relieved. Instead I knew how Noah…

I THOUGHT BEA was going to hit Roger with the…

BEA ALMOST GOT out of the house without me next…

AS BEA HAD ADMITTED, her experience didn’t prove anything; it…

I HAD BEEN a little uneasy about how Kevin and…

DURING THE FOLLOWING DAYS I began to think that I…

THE GOTHIC ATMOSPHERE was so thick I half expected Bea…

THE BUS was two hours late leaving Pittsfield. Not bad…

I SAW ROGER and Bea last month in Chicago. They…

Other Books by Barbara Michaels

GOD ONLY KNOWShow it all began. After all the searching and seeking, the rational debate and wild, intuitive guessing. I’m not sure we really arrived at the truth. If there is such a thing as truth. We poor humans are so imprisoned in narrow boundaries of space and time, so confined by five meager senses. We are like ants, running frantically back and forth on meaningless errands that consume our years, taking a few square inches of earth for a universe.

Father Stephen would say that God had nothing to do with it. In the early centuries of the Church he’d have been excommunicated for the error of Manichaeism. That’s one of your classic, recognized heresies—the idea that the powers of good and evil are equal in strength, waging an unending war for the salvation or damnation of the world. His God is an aristocratic, bearded old gentleman in a nightshirt, and the Other One is a cross between Milton’s lofty, tormented dark spirit and a Hallowe’en devil with horns, tail, and pitchfork.

Father Stephen believes that he and the old gentleman in the nightshirt won this fight. Bea agrees with his general premise, but takes a little of the credit to herself. Roger thinks he won, by strictly logical, rational methods. Me? I got away. That’s not victory, that’s strategic retreat. He who fights and runs away…But I won’t be back to fight another day. At least not on that battlefield.

If I didn’t exactly lose, I certainly didn’t win. My adversary is still there, undefeated, strong as ever. The winter storms have come and gone, and the house still stands. It has endured worse—fires and floods, siege and invasion, enemies internal and external—for a thousand years; and I have no doubt it will still be standing a thousand years from now, when the slender silver ships pierce the sky on their journeys to the stars. Who will be living in it then, I wonder? Descendants of man, if there are any left, or buggy-eyed monsters from far-off worlds, alien aesthetes who admire the quaint architecture of the ancient humans? Be sure of one thing: if there is a sentient creature alive in that distant age, it will protect the house. The house will survive. It has its defenses, and its Guardians.

Joe left for Europe on Friday the thirteenth. He didn’t have to; he picked that date deliberately. Joe likes to throw rocks at the goddess of fortune.

That’s why I remember the date. On Thursday the twelfth I was in my inconveniently tiny kitchen mincing and chopping and braising and doing a lot of other things that do not ordinarily constitute my preparations for a meal. I should not have been cooking. I should have been correcting final exams. Some of my unfortunate students were pacing the halls outside my office, wondering—with good reason—whether or not they had passed. To delay their knowledge of their fate for even a day was sheer sadism. I knew that, because I was not too far away from my own student days. I was also, as Joe frequently pointed out, a simple, sentimental schnook. Why should I feel pangs of conscience about the lazy slobs who hadn’t bothered to finish papers or study for exams? I did have pangs of conscience. But I fought them down and went on mincing, braising, and so on. This was Joe’s farewell dinner and it had to be special.

Joe had suggested we go out—with me paying. Well, that was fair enough; it washis farewell dinner. We didn’t eat out much. We were both paying off educational loans, and our combined salaries were less than that of a marginally competent insurance salesman.

My reason for vetoing the suggestion was not because I grudged spending the money. My argument ran along these lines: you’ll be tired, you’ll have a hundred last-minute chores to finish, you won’t feel like getting dressed up—and wait till you see how well I can cook, when I put my mind to it. That last was the real reason, though I didn’t recognize it then: “Look at me, I can do anything. Won’t you miss me when I’m not around?”

We had been together for about six months. They had been good months. Even the fights were entertaining. There were a lot of fights, because Joe was an unreformed male chauvinist, and he kept stepping on my tender feminist toes. Rationally he had to agree with my insistence that we share the domestic chores. My academic load was as heavy as his, my prospects were as good. There was no reason why he should expect to march into the apartment every evening, throw himself into a chair and ask, “What’s for dinner?” There was no reason why he should assume I would pick up his socks and do his laundry.

The first time he asked what was for dinner I handed him a pound of raw hamburger and said, “That’s for dinner. Let me know when it’s ready.” I never really won the laundry issue. After a while it seemed simpler to scoop up all the dirty clothes when I went to the laundromat.

It’s amazing how many little problems come up when people live together, in wedlock or out of it. Things you never think about in the raptures of first love—things so trivial they shouldn’t matter. We fought about how often to clean the apartment, and who would clean it; we fought about scrubbing toilets, and about how much beer can legitimately occupy shelf space in the refrigerator, to the exclusion of less entertaining staples; we fought about our friends, and whether or not to lie to our families about our relationship; and of course we fought about whether we should get married. Sometimes he favored the idea, sometimes I did—but we never agreed.

Strange as it may seem, it was fun at the time. Joe had a quick temper and the sensitivity of a slug, but he never sulked. Our fights ended in laughter, after one or the other of us had recognized the basic absurdity of the issue, or in a loving and tempestuous reconciliation. That was Joe’s strong point—tempestuous reconciliations. He made love with a blend of tenderness and toughness that swept me off my size-nine sneakers. His worst fault—or so it seemed to me then—was his complete lack of interest in anything but science. Music bored him; the visual arts were just ways of filling up empty spaces—he couldn’t see any real difference between Raphael and Norman Rockwell; and as for my field…He told me early in our relationship that he hadn’t read a work of fiction since his sophomore year in high school. Poetry? Oh, yeah, there was one poem he used to like: “A bunch of the boys were whooping it up….” I had dreamed of a lover whom I could address in passionate iambic pentameters—Millay or Wylie, if not the Bard himself. But Joe had other good qualities.

We had only been sharing the apartment for a couple of months when Joe heard that his grant for the following summer had been approved. That evening he burst in waving the letter and grinning from ear to ear. I knew what the news was before he told me. We had discussed the grant, and prayed for it, but we had never really expected he would get it.

And—I realized, as my stomach dropped down into my shoes—I hadn’t wanted him to get it.

I tried to emulate his enthusiasm, bubble over with congratulations, jump with joy. I guess I was too stunned to bubble or jump high enough. Joe made a snide remark, I snapped back—and we were at it again, hurling verbal missiles at each other. The final insult was when he accused me of being jealous and wanting to keep him tied to my apron strings. I never wore aprons.

The fight ended in embraces and apologies. Joe got himself a beer and we sat on the couch and talked.

“I know,” I mumbled. “I’m sorry, Joe, I really am. I know what a wonderful deal this is. My God, there must have been five hundred applicants. I’m just a fool.”

“Quit apologizing,” said Joe. “Love is never having to say—”

“No, listen. I’ve just had one of my greater ideas. Come with me.”

“Come with me. We’ll scrounge the money somehow—borrow it, if we have to. Hell, Anne, with you helping me I can get through twice as much work. I was wondering how I was going to accomplish everything in only three months. This is a terrific solution.”

It was not exactly the most romantic way of putting the matter; but although this sour thought passed through my mind, I suppressed it. We weren’t talking about romance, we were talking about two adult people with career aspirations trying to work out a reasonable solution.

“It’s a lousy idea,” I said. “Are you suggesting I give up my summer project and play secretary to you? Go farther in debt for the dubious pleasure of watching you work twelve hours a day while I run back and forth taking notes and fetching coffee?”

Joe’s nostrils flared and his face reddened. “I am suggesting a way in which we can be together this summer. I thought that was important to you.”

“It is. I guess,” I said, staring thoughtfully at my clasped hands, “the question is, how important is it to me?”

Three months isn’t much time to donate freely to someone you love. However, the decision involved bigger issues. If I went with Joe it wouldn’t be a free gift of love, it would be concession and surrender. He didn’t compromise. I could go his way or not go at all, and that was how it would always be. The choice was mine, not just on this one issue, but for as long as we were together. Did I want to spend my life married to Joe, cooking and cleaning and having babies and typing his papers for him, with rewards like “And finally, I dedicate this book to my wife, who typed the manuscript and made a number of valuable suggestions”? Or did I want to type my own manuscripts and write my own patronizing dedications?

Behind the Fire: A Dark Thriller by Susan May
The Redemption of Lord Rawlings by Van Dyken, Rachel
Europa (Deadverse Book 1) by Flunker, Richard
Coveted - Book 3 in the Gwen Sparks Series by Nelson, Stephanie
The Key to Starveldt by Foz Meadows
Green Eyes by Amanda Heath
Flipped Out by Jennie Bentley
Slave World by Johnny Stone
The Frozen Moon: Book Two of The Living Curse series + BONUS Full Version of Book Three! by Swinn, J.D.
Shimmers & Shrouds (Abstruse) by Brukett, Scarlett