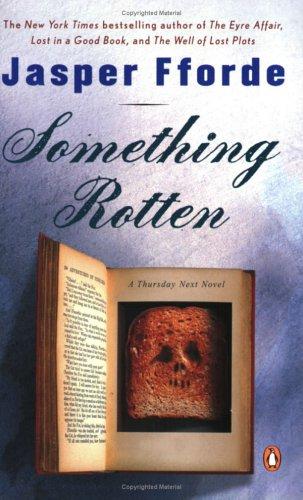 Chapter 8. - Time Waits for No Man

Chapter 11. - The Greatness of St. Zvlkx

Chapter 21. - Victory on the Victory

Chapter 35. - What Thursday Did Next

Chapter 37. - Before the Match

KAINE
PUBLISHING
Warning: This book may become subject to retrospective
book-burning legislation. To comply with Kaine Directive
CSBO-812864, the Mandatory Combustibility Information
of this novel has been calculated as follows: 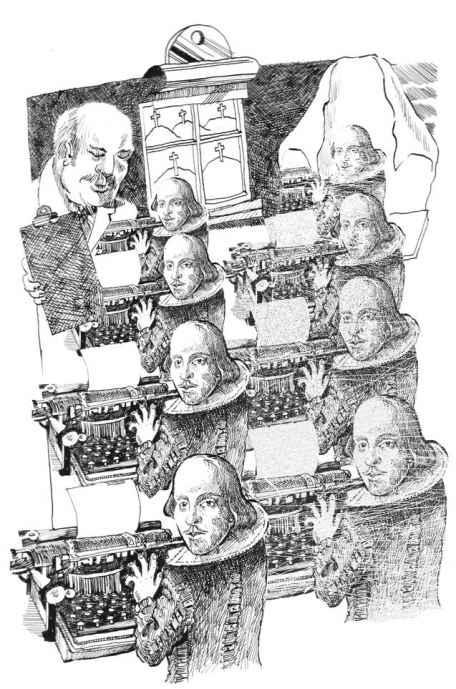 I tried to imagine the whole room full of Shakespeare clones clattering away at their typewriters. . . . 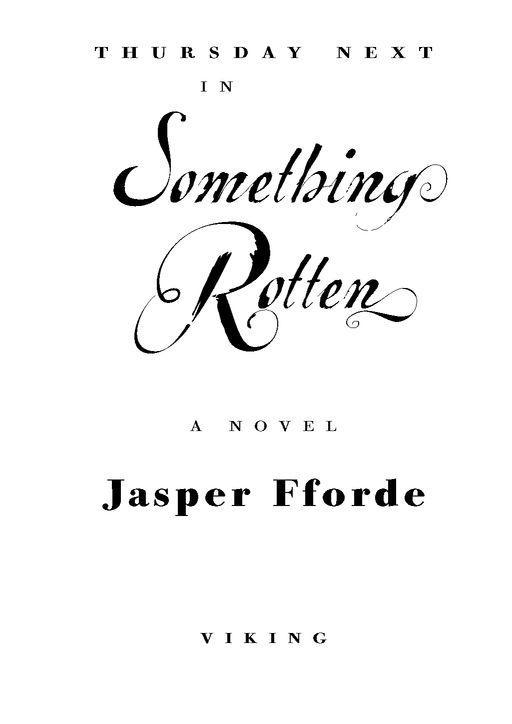 First published in 2004 by Viking Penguin, a member of Penguin Group (USA) Inc.

Frontispiece and text illustrations by Maggy and Stewart Roberts
Frederick Warne & Co. is the owner of all rights, copyrights, and trademarks
in the Beatrix Potter character names and illustrations.

Publisher’s Note:
This is a work of fiction. Names, characters, places, and
incidents either are the product of the author’s imagination or are used fictitiously,
and any resemblance to actual persons, living or dead, business establishments,
events, or locales is entirely coincidental.

For Maddy, Rosie,
Jordan and Alexander

With all my love

This book has been bundled with
Special Features,
including
The Making of
documentary, deleted scenes from all four books,
outtakes and much more.

To access all these free bonus features,
log on to
www.jasperfforde.com
/specialtn4.html
and enter the code word as directed.

Thursday Next:
Ex-operative from Swindon’s Literary Detective office of SpecOps-27 and currently head of Jurisfiction, the policing agency that operates within fiction to safeguard the stability of the written word.

Granny Next:
Resident of Goliath Twilight Homes, Swindon. Age 110 and cannot die until she has read the ten most boring classics.

Landen Parke-Laine:
Thursday’s husband, who hasn’t existed since he was eradicated in 1947 by the Goliath Corporation, eager to blackmail Miss Next.

Mycroft Next:
Inventor uncle of Thursday and last heard of living in peaceful retirement within the backstory of the Sherlock Holmes series. Designer of Prose Portal and Sarcasm Early-Warning Device, amongst many other things. Husband to
Polly
.

Colonel Next:
A time-traveling knight errant, he was eradicated by the ChronoGuard, a sort of temporal policing agency. Despite this, he is still about and meets Thursday from time to time.

Cat formerly known as Cheshire:
The ex-Wonderland überlibrarian at the Great Library and Jurisfiction agent.

Bowden Cable:
Colleague of Thursday’s at the Swindon Literary Detectives.

Daphne Farquitt:
Romance writer whose talent is inversely proportional to her sales.

Yorrick Kaine:
Whig politician and publishing media tycoon. Also right-wing Chancellor of England, soon to be made dictator. Fictional, and sworn enemy of Thursday Next.

President George Formby:
Octogenarian President of England and deeply opposed to Yorrick Kaine and all that he stands for.

Lady Emma Hamilton:
Consort of Admiral Horatio Lord Nelson and lush. Upset when her husband inexplicably died at the beginning of the Battle of Trafalgar. Lives in Mrs. Next’s spare room.

Hamlet:
A Danish prince with a propensity for prevarication.

SpecOps:
Short for Special Operations, the governmental departments that deal with anything too rigorous for the ordinary police to handle. Everything from time travel to good taste.

Chimera:
Any unlicensed “nonevolved life-form” created by a hobby genetic sequencer. Illegal and destroyed without mercy.

St. Zvlkx:
A thirteenth-century saint whose revealments have an uncanny knack of coming true.

Lola Vavoom:
An actress who does not feature in this novel but has to appear in the Dramatis Personae due to a contractual obligation.

Minotaur:
Half-man, half-bull son of Pasiphaë, the Queen of Crete. Escaped from custody and consequently a PageRunner. Whereabouts unknown.

Jurisfiction
is the name given to the policing agency
inside
books. Working with the intelligence-gathering capabilities of Text Grand Central, the many Prose Resource Operatives at Jurisfiction work tirelessly to maintain the continuity of the narrative within the pages of all the books ever written. Performing this sometimes thankless task, Jurisfiction agents live mostly on their wits as they attempt to reconcile the author’s original wishes and readers’ expectations against a strict and largely pointless set of bureaucratic guidelines laid down by the Council of Genres. I headed Jurisfiction for over two years and was always astounded by the variety of the work: one day I might be attempting to coax the impossibly shy Darcy from the toilets, and the next I would be thwarting the Martians’ latest attempt to invade
Barnaby Rudge
. It was challenging and full of bizarre twists. But when the peculiar and downright weird becomes commonplace, you begin to yearn for the banal.

The 42nd Parallel by John Dos Passos
All That and a Bag of Chips by Darrien Lee
Payback and a Bottle of Merlot: Like Sisters Series Book One by Bria Marche
Twenty Tones of Red by Montford, Pauline
Sex Kittens and Horn Dawgs Fall in Love by Maryrose Wood
Thirty Miles South Of Dry County by Kealan Patrick Burke
Everything You Are by Lyes, Evelyn
Finton Moon by Gerard Collins
Sol: Luna Lodge #1 by Stevens, Madison
The Adventuress: HFTS5 by M.C. Beaton, Marion Chesney