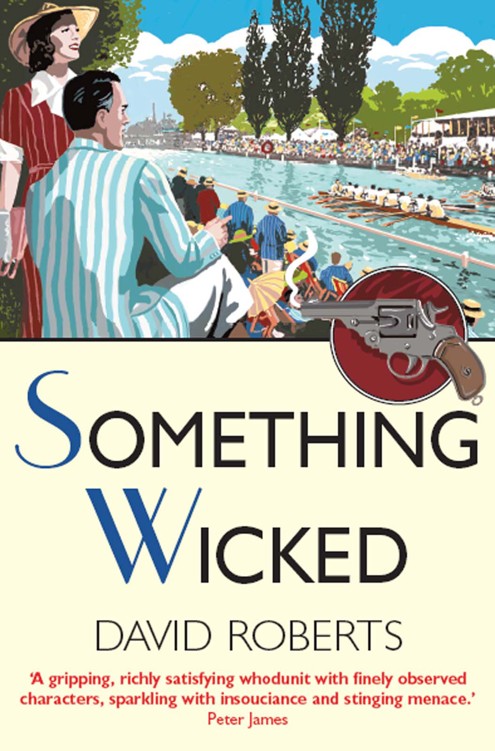 D
AVID
R
OBERTS
worked in publishing for over thirty years before devoting his energies to writing full time. He is married and divides his time between London and Wiltshire.

Visit www.lordedwardcorinth.co.uk to find out more about David and the series.

‘A classic murder mystery with as complex a plot as one could hope for and a most engaging pair of amateur sleuths whom I look forward to encountering again in future novels.’

The Life and Crimes of Agatha Christie

‘
Dangerous Sea
is taken from more elegant times than ours, when women retained their mystery and even murder held a certain charm. The plot is both intricate and enthralling, like Poirot on the high seas, and lovingly recorded by an author with a meticulous eye and a huge sense of fun.’

‘Roberts’ use of period detail . . . gives the tale terrific texture. I recommend this one heartily to history-mystery devotees.’

‘The plots are exciting and the central characters are engaging, they offer a fresh, a more accurate and a more telling picture of those less placid times.’

Bones of the Buried

The right of David Roberts to be identified as the author
of this work has been asserted by him in accordance with the
Copyright, Designs and Patents Act, 1988.

For Violetta and Fernando

I am most grateful to Kelly Russell, Wendy Bann and all at The River and Rowing Museum at Henley for helping me research the 1938 Henley Royal Regatta. I am also grateful to James Crowden CVO and to Christopher Dodd whose book
Henley Royal Regatta
is rightly regarded as definitive. Thank you to Henley Royal Regatta Headquarters, in particular Gino Caiafa and Paddy for showing me Temple Island. Many thanks also to Rebecca Caroe who took me to the 2006 Regatta and explained its rites and rituals.

I am also grateful to Mark Ryan who took me up in his Tiger Moth and Tim Bruce-Dick whose grandfather was Secretary of Phyllis Court in the 1930s. Thank you also to Gregory Bowden, Nick Mann and Olivia and Katharine Williams.

With so much help, I have no excuse for getting things wrong.

By the pricking of my thumbs,
Something wicked this way comes.

As flies to wanton boys, are we to the gods;
They kill us for their sport.

James Herold looked out of the drawing-room window towards his beloved apiary. He was too lame, too weak, too feeble to look after the bees himself. Since his first heart attack he had found even walking difficult. His lungs seemed made of metal, each little breath an effort of will. And this for a man who, in his twenties, had run a mile in four and a half minutes and had climbed the Matterhorn. This was a living death.

But who was that out near the hives? Watkins? No, he had gone into town to get the mower mended. He called to his wife, his voice thin and reedy, but remembered she had gone shopping. And his nurse – where was she? Of course, it was her day off. He struggled out of his armchair, reached for his stick and stumbled out into the hall. He had trouble with the side door. It was stuck and he tugged on it petulantly. It sprung open, almost knocking him backwards. A sense of urgency, almost panic, seized him. The sunlight blinded him but he forced himself on. He had the idea that he was late for an appointment. There was a meeting he had half-forgotten but which it was absolutely necessary he attend.

He stopped, leaning on his stick, panting heavily. He wiped the sweat off his brow and wished that he had put on his old straw hat to cover his naked head. He shaded his eyes with his hand. Was it Watkins? He did not think it could be. This man seemed taller and surely broader in the chest. Watkins was a weedy fellow whom he had always despised but had to put up with. Good with the bees – he must be fair – but not strong. Whoever it was in Watkins’ smock beckoned to him across the iridescent grass. He thought for a moment he almost recognized the man but he could not be sure. He wore gloves thick as a wicket-keeper’s. His legs were encased in heavy wellington boots. His head was covered by a wide-brimmed hat from which hung a veil. Herold passed his hand over his hairless skull. A drone began in his head like insects nesting. Was it
his
hat the man was wearing?

He shuffled across the lawn, so closely cut but a jungle to a man in his condition. Then his heart began to race. He saw the man go over to one of the hives and begin to shake it. It was a heavy wooden structure but it began to move on its brick base and he could hear, quite distinctly, the bees buzzing, angry at being disturbed. Herold gestured to the man to stop. What he was doing was madness – vandalism. He wanted to shout to him to desist but he could not find the breath. He tried to walk faster and his shuffle became almost a trot. He was now less than a hundred yards away. What was the man doing? He would have the hive over if he wasn’t careful. Why, there it went! Now the man had moved to another hive and was wrenching that over too.

Suddenly the hum became a roar and a dark cloud of bees poured out of the despoiled hives looking for their enemy. The man in the bee-keeper’s costume began to walk purposively towards him. It was only then that Herold realized the danger he was in. He turned and tried to run but missed his footing and his stick spun away from between his legs. He lay on the ground like an insect helpless on its back and looked up. The man lifted his veil and Herold recognized his nemesis. He saw in the face of the god his own death and knew that this was murder. The bees covered every inch of his flesh. They masked his eyes and left their hooked stings in his eyelids. He put his hands to his face to try to scrape them off but he was too weak. The bees coiled about his head like writhing snakes to make a ludicrous wig. He understood that they had been sent to take him with them into that other world beyond anger and pain. And he was not ungrateful. The venom from a thousand stings stopped his heart and ended his suffering. He had, after all, made his meeting and found that his appointment had been with death.

Lord Edward Corinth was Mr Silver’s last patient. He had told the receptionist she could go early so they were alone in the surgery. The drill buzzed like an angry wasp as the dentist probed the cavity. Edward’s knuckles whitened as he clenched the arms of the chair. He had faced danger in his time – even dodged a bullet or two – but this was worse, much worse. He had had a horror of the dentist’s chair ever since his tenth birthday when his mother had promised him a treat. He had set out joyfully, his hand in hers, on a long-anticipated visit to the circus. They did go to the circus but, traitorous woman, not before he had been unsuspectingly taken to a room in Wigmore Street, placed in a black chair and attacked by a man in a white gown. Never again did he trust his mother. He had forgiven her – of course he had – but from that day forward he was suspicious of any promise of future delight. There was always going to be a catch. There would always be a worm in the bud.

Take the news that Verity Browne, his fiancée – how he loved to use that word – was returning to London. He had heard from his friend Lord Weaver, the proprietor of the
New Gazette
and the employer of the woman who had so recently and unexpectedly promised to be his wife, that she was coming home after only a few weeks in Prague as the paper’s correspondent in that troubled city. His heart had leapt with delight but his joy was quickly soiled by suspicion.

‘She hasn’t wired you? Probably didn’t want you to fuss. The fact is she collapsed at some official dinner. The doctor thinks she has an ulcer but there’s just a chance it might be . . . you know, TB.’

Tuberculosis! The word fell on his ears like earth on a coffin.

‘TB! Oh, my God! I told her she couldn’t go on living such a rackety life and not get ill. When she came back from Vienna she was exhausted. She could hardly eat anything. I
told
her she should see a doctor but she said she was just tired.’

He blamed himself bitterly for not having frogmarched her into his doctor’s surgery and insisted that she have a thorough check-up, but Verity was not easy to compel. Now he thought about it, he realized she must have suspected she was not well before she went to Prague but had refused to admit it.

When he collected her at Croydon Airport, his attempts to disguise his anxiety had been unsuccessful. Her skin was an unhealthy grey and her eyes were dull. She had insisted on walking to the customs hall but, when they reached the Lagonda, she had given up any pretence that she was all right and sat slumped beside him, uncharacteristically silent, her eyes closed. He had put her to bed in her flat in Cranmer Court and summoned his doctor. Verity had never consulted a doctor – never needed to – and had no name to suggest. Dr Clement had taken one look at her and called an ambulance. She was now in the Middlesex Hospital undergoing tests. If she was seriously ill she
must
let him take care of her, he thought grimly and hated himself for thinking it.

When Mr Silver had finished and removed the cotton wool from his mouth, Edward said, ‘I had forgotten how much I hated that.’ He rinsed his mouth, feeling the new filling with his tongue. ‘Am I making a fuss or do you find most of your patients hate putting themselves at your mercy? It’s something about lying so helpless in your chair and having to watch as you fit a new head to the drill. I know, rationally, that you are going to take away the pain in my tooth but every nerve in my body is telling me to make a run for it.’

Mr Silver did not seem to hear him and Edward saw that he was preoccupied. Instead of reassuring him that he was no more of a coward than other men, he said, ‘You remember I told you I wanted to talk to you about something . . . to consult you?’

‘Of course, fire away.’ Edward hoped that this wasn’t going to be embarrassing. Was he having trouble with his wife? No, he remembered Silk had no wife. His business then . . .?