Read Sonata for a Scoundrel Online

Sonata for a Scoundrel 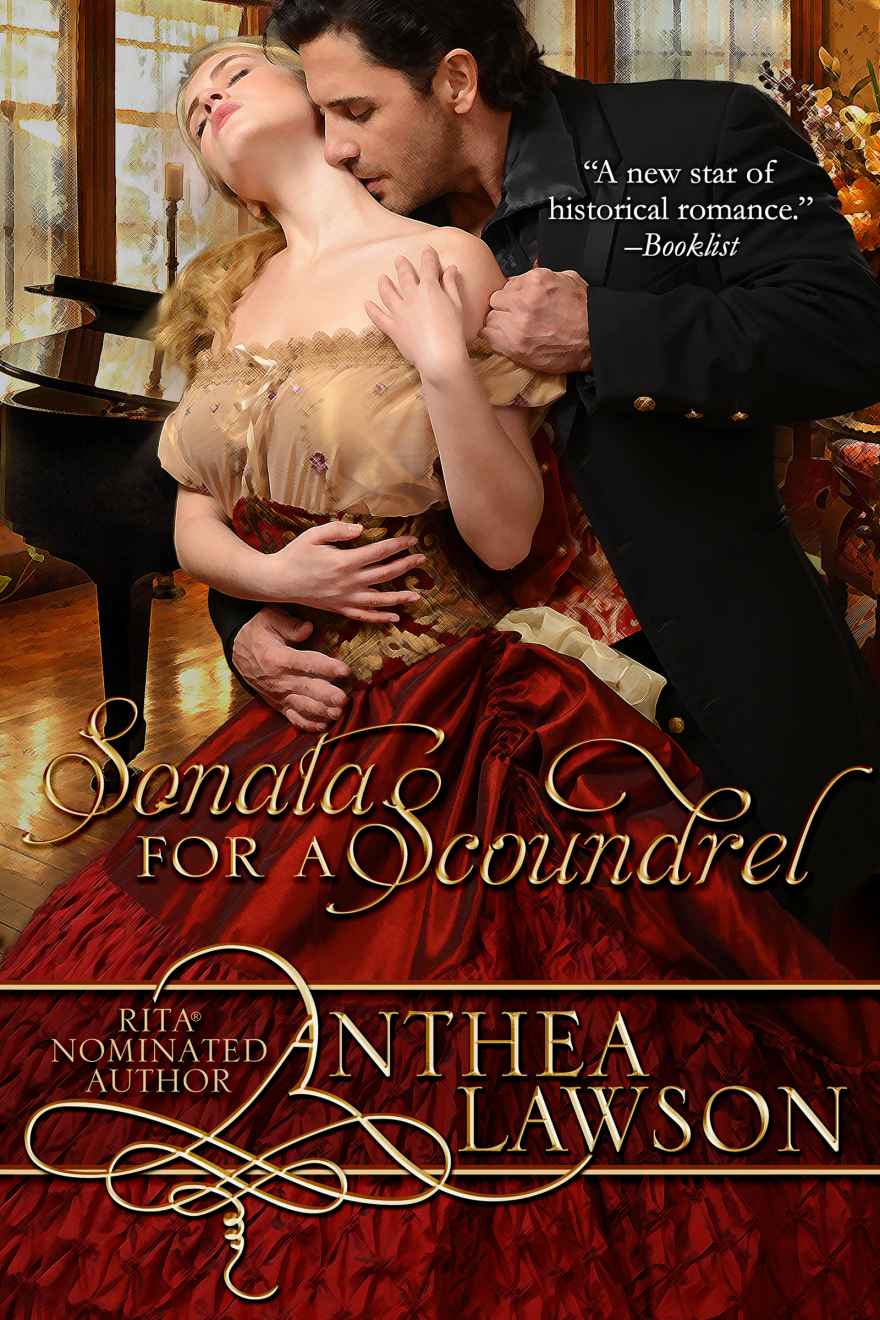 SONATA for a SCOUNDREL

All characters in this story are fiction and figments of the author’s imagination. To obtain permission to excerpt portions of the text, please contact the author. No unauthorized duplication, please – this e-book is licensed for individual use only.

QUALITY CONTROL: We care about producing error-free books. If you find a typo or formatting problem, send a note to [email protected] so that the error may be corrected.

SONATA for a SCOUNDREL

Clara Becker is a supremely gifted composer—a talent of little to use to a woman in 1830s England. Her compositions only have worth when they are published under her brother’s name, yet this deception barely enables them to scrape out a living in the poorest quarter of London.

Darien Reynard, the most celebrated musician in Europe, pursues success with a single-minded intensity. When he comes across Becker’s compositions, he knows that this music will secure his place in history. Darien tracks the composer down and, with some difficulty, convinces the man to tour with him. Mr. Becker agrees, but with the most unusual condition that he bring along his sister…

To my husband, Lawson—my partner in music, and in life. I love you.

In a mere two days, that pre-eminent virtuoso of the violin, Master Darien Reynard, will grace the stage at King’s Theatre. Ladies, keep your smelling salts close at hand, for Master Reynard is renowned for leaving a swath of swooning in the wake of his performances…

T
he melody threading through Clara Becker’s mind stopped, snipped by the angry voices penetrating the study door. She sat back in the cracked leather chair and put down her pen, the musical notes wavering on the page before her tired eyes. The ache in her shoulders and hand—distant when she was caught up in composing—now pulsed distractingly, vying with the landlady’s shrill tone to fragment her concentration.

“If you don’t deliver the rent tomorrow, you’re on the street. Out, I say!” The landlady’s voice was nearly a shriek. “You’ve been late one too many times, Mr. Becker. I’ve a mind to send my sons over tonight to pitch you out!”

“We will have the money,” Papa said, his cane thumping the floorboards for emphasis. “But now, you must leave.”

The fire in the small hearth had burned down to nothing but sullen embers. Clara covered her ears with her chilled hands and hummed under her breath, trying desperately to recapture the music. If she did not finish this piece, they were ruined.

The voices faded, thank goodness. Nicholas was moving the landlady toward the front door. Clara let out a breath and closed her eyes. The door slammed, and blessed quiet filled the house. It was a strained silence, but it was enough.

The music sprang into her mind once more, bright strands of melody flung against a somber background. She took up her pen and bent to the page, letting the notes inside her mind transport her to a distant, splendid place. A place far away from the reality of their cramped lodging, the worry that shaded her days, the hoarded coals that barely kept the chill of November from biting to the bone.

There was nothing now but the notes unfolding. She sang the refrain under her breath, the dip and scratch of her pen keeping a steady rhythm. Time fell away, until she inked in the final double bar.

Finished. Clara pulled her frayed shawl tightly about her shoulders. The music was complete, the window in her soul shuttered, and she felt like ashes; the dun and dross left by a consuming fire.

She could hear Papa and Nicholas at odds again. Despite their attempt to whisper, her brother’s voice rose in counterpoint to her father’s gruff tone. She rubbed at her forehead. Papa would win the disagreement, in this as in all things. Though she appreciated Nicholas’s support, it would be easier for her to compose if the house were not so often filled with unhappy tension. Still, argument was better than that terrible month when Nicholas had not spoken at all.

She blew lightly across the page until the ink no longer gleamed, then gathered the rest of the manuscript. The chair scraped across the floor as she stood, and the arguing voices stilled. Clara was not surprised to pull the door open and find both her brother and father waiting. Their faces were filled with anticipation, though in Papa’s case it took years of familiarity to identify any change in his usual dour expression.

“Finished,” Papa said. It was not a question. He did not wait for her nod, but gestured to Nicholas. “Give it to your brother, so we may hear it.”

Nicholas gave her a smile, as weak as the light from the single lamp in the room. A lock of his overlong blond hair fell across one eye as he glanced toward the piano.

It was not as though she were incapable of sitting at the instrument and performing the music herself. As children of a music master, both she and her brother were accomplished pianists. But Papa felt it best that Nicholas play the music as soon as she had finished the composition. It was a ritual now. Nicholas would play it, and the music would no longer be hers.

She hesitated, as she always did. Papa cleared his throat and she forced the pages forward, the notes that had been a part of her soul released into her brother’s keeping. The sheets of music shook, ever so lightly, as she released her grasp.

Her throat was dry as parchment. How long had she been in the study? Certainly it had been just past luncheon when she began, but now the curtains were drawn against the heavy night, the sounds of the city quiet around them. It must be very, very late.

Perhaps her father and Nicholas had been arguing about letting her stop, letting her rest.

She could not have, in any case. The music had her in its grip. And even if she’d had to scrape and fashion each note with laborious patience, she would have finished her composition before morning broke, cold and hard, over the smudged rooftops of London.

The landlady’s visit had been the final goad. They needed the money her work would bring, far more than any of them were willing to admit. It was their only source of income. Her brother’s piano students among the gentry were long gone.

“Hm.” Nicholas held the first page up to catch the dim light. “It’s in E minor.”

“A minor composition?” Papa’s voice was stern. “Are you certain?”

Clara stifled a sudden, wild urge to giggle. How could the music be anything but in a minor key?

It was winter, almost as cold and dark inside their small house as it was outside in the streets of their dilapidated neighborhood. The pantry was dwindling down to potatoes and cabbages and a sliver of salted meat. They barely had the money to furnish Mary with laundry soap. It was fortunate that Clara’s dresses had been drab colors originally, for they were all brownish grey by now.

The only melodies that could possibly find roost in her mind were in minor keys, shaded with melancholy.

“Yes,” she said. “E minor.” The steadiness of her voice surprised her.

Nicholas lit the candles at the piano. “Have you named it?”

It was impossible not to name her compositions, though Papa invariably changed them. She touched her gold locket, the one that had belonged to Mama, one finger stroking the smooth metal.

“The piece is called
Trieste
.” Sadness.

Nicholas settled himself at the keys. He leaned forward, fingers poised, then began.

Slow and quiet at first, the phrases dipped and turned like smoke, like unvoiced dreams, while his left hand kept a steady, tolling beat. Then the middle section—the music seeking the light like a flower, straining upward. Nicholas hit a wrong key and she winced, but held her tongue. Onward… and now to the part where the brightness faded into a series of descending notes, the flower curled into itself, and the piece finally came to rest.