Read Song of the River Online

Song of the River 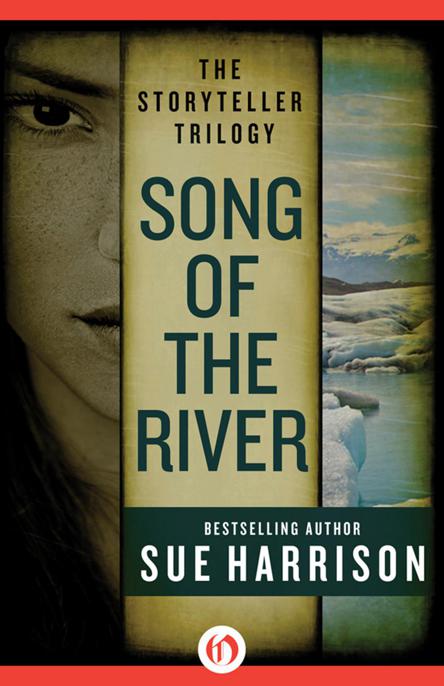 Song of the River

Preview: Cry of the Wind

A Biography of Sue Harrison

West of the Grandfather Lake

THE PAIN HAD BEEN
terrible, but that was not what K’os remembered. She remembered her helplessness.

She had fought—scratched, kicked, bit the lobe off one man’s ear, gouged another’s eye.

She knew their names: Gull Wing, Fox Barking and Sleeps Long. They had come from the Near River Village to trade. Fox Barking had the narrow eyes of a man who lied, and Sleeps Long moved slowly, like someone accustomed to laziness, but Gull Wing carried himself like a hunter. K’os had watched him that evening in her mother’s lodge, had smiled if he looked her way.

The next morning she had followed them to the Grandfather Lake, had hidden behind the Grandfather Lake. That rock was a good luck place for women. Those who were pregnant went there to sit, hoping that magic would pass through the rock into the children who waited in their wombs. They spoke their hopes out loud: for a son who was a hunter, for a daughter who would look after her parents when they were old, for an easy birth.

The animals knew the goodness of that place. Caribou, lynx, bear came to drink. Muskrats made their lodges along the banks of the outlet rivers that flowed to the North Sea. In summers there were birds—mergansers, grebes, loons. In winter, the lake was a fine place to catch blackfish, those small soft fish, good eaten raw, full of oil. Just a few would fill a winter belly longing for fat.

It was a difficult walk from their village to the Grandfather Lake, through swamp and muskeg, over tussocks of old grass that stood knee-high above the ground. Hard to walk between, those tussocks were, and treacherous to the ankles of anyone who decided to walk across the tops. Women who went to the Grandfather Lake worked hard to get there. The good luck was worth their effort.

But today it had not been a place of good luck for K’os.

Now, sick and bloody from the struggle, she skirted her village instead of walking through it. Lodge entrances faced east toward the morning sun. She approached her mother’s lodge from the back, from the refuse heaps. She pulled the hood of her ground squirrel parka up over her head, drew her face inside the wolverine fur ruff.

She pushed aside the doorflap, crawled through the entrance tunnel. The lodge was large: three tall men could sleep head to toe across the floor, and still a woman had room to walk between them and the lodge wall. River rocks, worn smooth by water, had been brought to the winter village long ago, perhaps by her grandfather or his father, enough to circle the walls of the floor pit that had been dug several handlengths into the ground. Lodge poles, tied in a wide dome above the floor, were covered by two layers of caribou skin to keep the wind from stealing the warmth of the wood fire.

The caribou hide walls were well-sewn, the floor padded with caribou skins, the bedding made of soft warm furs—wolf and lynx and fox.

Her mother, Mink, sighed her relief when she saw K’os, but only said, “You have been gone too long.”

K’os had expected more of a scolding than that. Her mother’s smiling mouth hid a sharp tongue.

“I told you I was going to the Grandfather Lake,” K’os answered. Her words sounded strange to her, as though they came from another woman’s mouth. She raised a hand to her face. Her lips felt the same, her nose, her eyes. She stayed where she was, careful to keep her eyes averted from her father’s weapons. Blood was blood. Though her flow was not a regular moon flow, it might carry enough power to curse her father’s spears and knives, gaffs and hooks.

“Where are the roots?”

K’os inhaled—a quick, gasping breath. She had told her mother that she was going to the Grandfather Lake to gather spruce roots. The black spruce that grew in the dark wet muck on the west side of the lake had long, rope-like roots, strong yet easy to split. She had taken one of her mother’s favorite baskets to carry them. She must have left the basket there, after the men found her.

“You don’t have them? Where are they?”

K’os heard the hard edge in her mother’s voice, and she almost told her what had happened. Why keep such a problem to herself? Let her mother and father share her pain. But her mother’s tongue was not only sharp, it was busy. Soon every woman in the village would know. Not only the women but the men. Then who would want K’os as wife?

“I started my bleeding,” K’os said. “Just when the basket was almost full. I did not know what to do with the roots. I was afraid too much of my moon blood power was in them, so I left them. I know where the basket is. I hid it. If you say the roots are good, I will go back for them. If not, I will leave them.”

Her mother began to complain, but her father said, “It was wise, what she did. Leave her alone. What if you used those roots to sew a sael, and later some hunter ate from it? She can go back for the basket when she is done with moon blood.”

He frowned at K’os, then jutted his chin toward her face. “You need water. There is blood on your cheek.”

She was a beautiful woman, so everyone said, and she had found it was good to be beautiful. There was power in it. You could lie your way out of trouble. You could ask for things, and they would be given to you.

Her beauty was something she often pondered. What was it? A spacing of the eyes? A straight nose; lips, not too small or too large? Shining hair. Was there something else, something that had to do with luck? Surely today she lost whatever luck she had.

She looked at her mother. “I fell,” she said.

“The tussocks,” said her mother and shook her head. “I told you not to go.”

Mink tilted her head toward the side of the lodge where stacks of bundled pelts and skins awaited sewing. “There is enough to keep you busy,” she said. “And I will tell my sister to bring your little cousin Gguzaakk to the tikiyaasde. There is room for both of you there. You can watch her while we work.”

K’os did not like Gguzaakk. The child had only two summers; she was whiny and climbed into everything. But K’os nodded. Yes, while she was in the menstruation hut, she would care for Gguzaakk. And this time Gguzaakk’s mother would have no complaints.

Mink brought her a birchbark cilt’ogho of water. K’os reached for it. There was blood, dried and caked, on the palm of her hand. Mink, looking hard into her daughter’s face, did not notice.

“Your jaw and eye, too,” she said to K’os, and pressed her hand against her own face. “Bruises.”

K’os sat down. She covered her mouth to stifle a groan. Any movement hurt. The pain had slowed her pace during her journey back to the village, and she had been afraid she would not get to her mother’s lodge before darkness came. Then what chance would she have—alone and with her luck gone?

The men had hit her hard enough to knock her spirit out of her body, so she did not know everything they had done to her. As she walked that long path back from the Grandfather Lake, it felt as though her belly had nothing to hold it in, so she was sure they had torn something inside. When she urinated, she urinated blood.

She dipped her hand into the sael. They had been foolish, those three men, to lie there, all of them, in the grasses around the Grandfather Rock while she was still alive. They must have thought she was dead, or at least that she would not awaken for a long time.

She had lain there and listened to them, to their boasts, first about what they had done to her, then about other women they had used. They were going to take her again, they decided, then they would leave, return to the Near River Village, to their wives and children.

They had pushed K’os’s parka up, baring her belly and breasts, but had not bothered to take it off. Instead they had pulled the hood forward over her face and stuffed a portion of the ruff into her mouth, pressed the fur into her throat until it took all her effort just to breathe. They had found the woman’s knife sheathed at her waist, but not the blade hidden on her left forearm, strapped under her parka sleeve.

That knife was a gift from one of her older brothers. He had given it to her before he left to go live with his wife’s family at the Four Rivers Village—a man’s knife to protect her, because all her brothers lived in other villages with their wives.

K’os had gripped the sleeve knife with both hands and rolled off the rock, the blade out-thrust between her breasts, her fists grasping the haft and pressed tightly to her chest. Gull Wing had been lying next to the rock. She landed on him, drove the knife into his heart before he could react. She pulled it out and thrust it into one of his eyes, then into his neck. His gurgling cries brought the other men to their feet, and K’os took the knife from Gull Wing’s throat, held the blade out toward them.

“Which one do I kill next?” she asked, as she sat astride Gull Wing, the man shuddering in death throes beneath her. She dipped her finger in Gull Wing’s blood, sucked her finger clean.

She expected them to attack. They turned and ran.

Falling and running, falling and running, she did not stop until blood flowed like a river from between her legs. Then she hid in a clump of willow and stuffed her vagina full of moss and leaves, packing them in to stop the blood.

She stayed there, like an animal, wounded. At first she had been afraid they would find her, afraid she would die, but later she feared she would not die, ruined as she was.

Finally she had decided to continue toward the village, but when she stood, her feet would not move that way. Instead, they turned toward the Grandfather Lake. Instead, they walked her back to Gull Wing’s body.

The Gilded Cage by Susannah Bamford
Orchid Beach by Stuart Woods
Shapers of Darkness by David B. Coe
The Man Who Sold the World by Peter Doggett
A Killing in Comics by Max Allan Collins
Maximum Risk by Ruth Cardello
Zima Blue and Other Stories by Alastair Reynolds
Fire Season-eARC by David Weber, Jane Lindskold
Her Missing Husband by Diney Costeloe
Must Love Wieners by Griffin, Casey