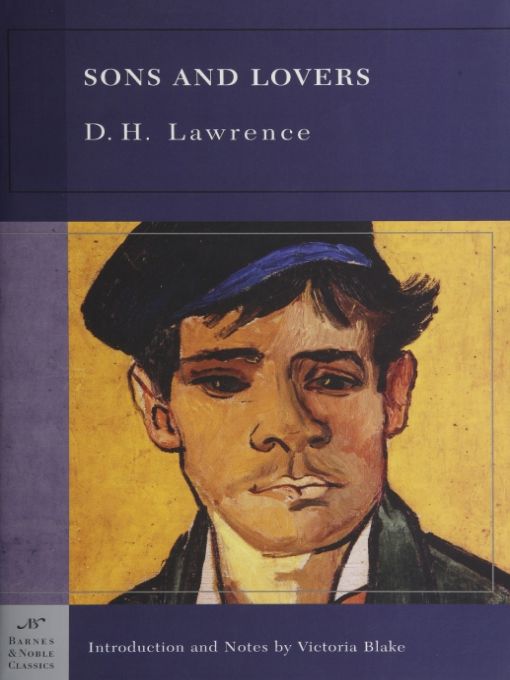 Table of Contents
From the Pages of Sons and Lovers
Title Page
Copyright Page
D. H. Lawrence
The World of D. H. Lawrence andSons and Lovers
Introduction
Dedication
PART ONE
Chapter 1 - The Early Married Life of the Morels
Chapter 2 - The Birth of Paul, and Another Battle
Chapter 3 - The Casting Off of Morel—the Taking On of William
Chapter 4 - The Young Life of Paul
Chapter 5 - Paul Launches into Life
Chapter 6 - Death in the Family
PART TWO
Chapter 7 - Lad-and-Girl Love
Chapter 8 - Strife in Love
Chapter 9 - Defeat of Miriam
Chapter 10 - Clara
Chapter 11 - The Test on Miriam
Chapter 12 - Passion
Chapter 13 - Baxter Dawes
Chapter 14 - The Release
Chapter 15 - Derelict
Endnotes
Inspired by Sons and Lovers
Comments & Questions
For Further Reading
From the Pages of
Sons and Lovers
Paul would be built like his mother, slightly and rather small. His fair hair went reddish, and then dark brown; his eyes were grey. He was a pale, quiet child, with eyes that seemed to listen, and with a full, dropping underlip. (page 65)
She felt the accuracy with which he caught her, exactly at the right moment, and the exactly proportionate strength of his thrust, and she was afraid. Down to her bowels went the hot wave of fear. She was in his hands. Again, firm and inevitable came the thrust at the right moment. She gripped the rope, almost swooning. (page 168)
She saw him, slender and firm, as if the setting sun had given him to her. A deep pain took hold of her, and she knew she must love him. And she had discovered him, discovered in him a rare potentiality, discovered his loneliness. (page 184)
He had come back to his mother. Hers was the strongest tie in his life. When he thought round, Miriam shrank away. There was a vague, unreal feel about her. And nobody else mattered. There was one place in the world that stood solid and did not melt into unreality : the place where his mother was. Everybody else could grow shadowy, almost non-existent to him, but she could not. It was as if the pivot and pole of his life, from which he could not escape, was his mother. (page 245)
A good many of the nicest men he knew were like himself, bound in by their own virginity, which they could not break out of. They were so sensitive to their women that they would go without them for ever rather than do them a hurt, an injustice. Being the sons of mothers whose husbands had blundered rather brutally through their feminine sanctities, they were themselves too diffident and shy. They could easier deny themselves than incur any reproach from a woman; for a woman was like their mother, and they were full of the sense of their mother. (page 306)
She put her hands over him, on his hair, on his shoulders, to feel if the raindrops fell on him. She loved him dearly. He, as he lay with his face on the dead pine-leaves, felt extraordinarily quiet. He did not mind if the raindrops came on him: he would have lain and got wet through: he felt as if nothing mattered, as if his living were smeared away into the beyond, near and quite lovable. This strange, gentle reaching-out to death was new to him. (page 314)
“You love me so much, you want to put me in your pocket. And I should die there smothered.” (page 453)

Sons and Lovers was
first published in 1913.
Introduction, Notes, and For Further Reading
Copyright © 2003 by Victoria Blake.
Note on D. H. Lawrence, The World of D. H. Lawrence and
Sons and Lovers
,
Inspired by Sons and Lovers, and Comments & Questions
Copyright © 2003 by Fine Creative Media, Inc.
All rights reserved. No part of this publication may be reproduced or
transmitted in any form or by any means, electronic or mechanical,
including photocopy, recording, or any information storage and
retrieval system, without the prior written permission of the publisher.
Barnes & Noble Classic and the Barnes & Noble Classics colophon are
trademarks of Barnes & Noble, Inc.
Sons and Lovers
ISBN 1-59308-013-1
eISBN : 97-8-141-14331-9
LC Control Number 2003100880
Produced by:
Fine Creative Media, Inc.
322 Eighth Avenue
New York, NY 10001
President & Publisher: Michael J. Fine
Consulting Editorial Director: George Stade
Editor:Jeffrey Broesche
Editorial Research: Jason Baker
Vice-President Production: Stan Last
Senior Production Manager: Mark A. Jordon
Production Editor: Kerriebeth Mello
Printed in the United States of America
QM
3 5 7 9 10 8 6 4
D. H. Lawrence
David Herbert Lawrence was born on September 11, 1885, in Eastwood, a coal-mining town in Nottinghamshire, England, the fourth child of a couple whose marriage Lawrence later described as “one carnal, bloody fight.” Lawrence’s psychologically intimate relationship with his mother would serve as the grounds for many of his novels. Lawrence studied to be a teacher but became interested in the arts. Jessie Chambers, a school love interest, submitted a number of Lawrence’s early poems to Ford Madox Ford, editor of
The English Review,
and he published them. This first exposure would prove to be fruitful, and Lawrence soon published several novels, including
The White Peacock
(1911) and
The Trespasser
(1912), as well as
Love Poems and Others
(1913).
Lawrence gained fame and notoriety in 1913 with the publication of
Sons and Lovers,
a novel which was criticized by some as being too overtly sexual.
Sons and Lovers
was followed by
The Rainbow
, a story of two sisters growing up in northern England that was banned upon its publication for its alleged obscenity. His novel
Lady Chatterley’s Lover
was pronounced obscene and banned in the United Kingdom and America. Despite the censorship, Lawrence remained unapologetic for creating “art for my sake.” Lawrence’s personal life, including his elopement with Frieda von Richthofen, wife of one of his professors and the mother of three children, fueled the aura of scandal that followed him throughout his career.
Despite censorship and other setbacks, in his exceptionally prolific literary career Lawrence authored more than a dozen novels, three volumes of stories and three volumes of novellas, an immense collection of poetry, and numerous works of nonfiction, which he called his “Pollyanalyties.” He also wrote eight plays, most of which have been forgotten. The Lawrences traveled widely, but as Lawrence’s health worsened they settled in the south of France, where the author died on March 2, 1930. His ashes lie in a memorial chapel at his ranch in New Mexico.
The World of D. H. Lawrence and
Sons and Lovers

The Alpha's Captive by Loki Renard
Blockade Billy by Stephen King
Reilly 04 - Breach of Promise by O'Shaughnessy, Perri
Learning to Forgive (The Learning Series) by R.D. Cole
Blood Bonds: A psychological thriller by Alex Matthews
The Wapshot Scandal by Cheever, John
Head Over Heels by Lena Matthews
The Dog Days of Charlotte Hayes by Marlane Kennedy
This Is What Happens Next by Daniel MacIovr
Raw and Dirty (Bad Boys MC Trilogy #1) by Violet Blaze