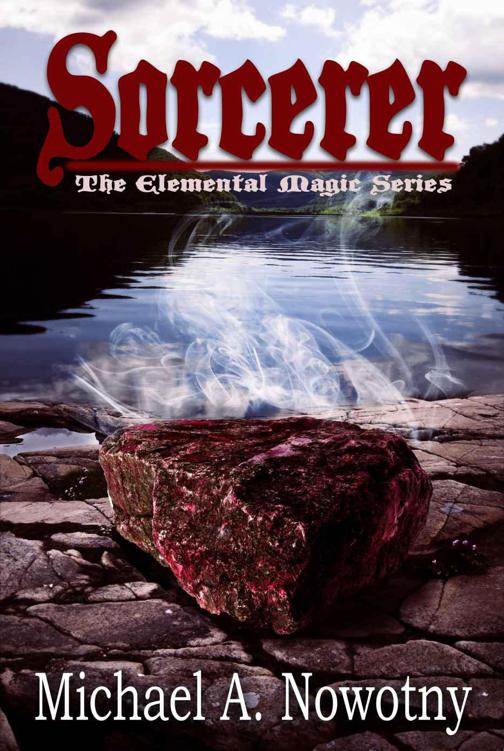 BY Michael A. Nowotny

BY Michael A. Nowotny

This is the part where I thank some people:

My daughters: for giving me the patience to sit and write about the world in my head and to my youngest for keeping me up late.

My wife Jaclyn: for her encouragement that has kept me going.

My step-mother Nila: for taking the time to help me do some editing.

To my brother in-law Mark: for having the artistic ability that I severely lack!

The Banished break free and gods are slain. The gods must put their faith in those who have had faith in them, for only those who are kin to the gods may save them. Should they choose to.

Introduced in SORCERER is a young man named Alec Carter. A young man raised by his aunt. Hoping to follow in the footsteps of his father he is granted admission to the King’s Academy. When he finds out that he has the power of magic within him his hopes change. With a healthy set morals and a reverence for the Gods Alec enrolls at the King’s Academy.

Learning isn’t easy when dealing with a budding relationship or with nobles and a goddess who want him gone.

Patten could see the Sundarian army at the other end of the North Pass with their gleaming red and gold uniforms and shining helmets. Most of his soldiers were conscripts like himself. Some of them had even advanced to the rank of captain as he had but not many.

Patten sat easily on his horse behind the front ranks waiting for confirmation that the enemy hadn't tried to send anyone over the high sheer cliffs that rose on both sides of the pass. He felt better knowing most of his friends were in the second half of the army with the wizards and other specialized units.

Looking around at the squadrons he'd been training with over the past several months in their brown and green uniforms soiled from the fast march across the plains. Patten gave a silent prayer to the gods knowing that many of them wouldn't be leaving the pass at the end of the day.

He once again patted his breast pocket checking for the letter from his wife. The letter told that she had given birth to his son and named him Alexander Michael Carter.

While he was extremely happy to hear about his son and wished he was there with him he was also proud to serve his country. If the Sundarians hadn't tried to invade their lands he would be home right now holding him.

Patten's lieutenant rode up and saluted with a quick hand over the heart and nod of the head handing over a message roll. Reading it quickly he stored it away in his saddlebags. Patten now had confirmation that the cliffs were clear and orders to clear the pass of enemy soldiers.

With 600 men under his command he signaled the horn man to advance the ranks. With the sound of the advance Patten rode slowly just behind the front ranks passing between the vertical cliffs on each side. He came to a stop when the two armies were several hundred yards from each other. His men spread out twenty men wide to cover the entire pass. He shifted uneasily in his saddle tension crawling its way up his back.

Patten knew this wasn’t going to be good. He’d felt the crawling sensation several times in the past and knew something was about to go very wrong, it always did.

Hearing the Sundarian army get the order to advance he signaled for his own men to meet them. The sound of his horn man’s horn was drowned out by several ear shattering cracks. Both armies became very quiet as they shuffled to a stop looking up at the cliffs on either side of them in fear.

It quickly became obvious that the tops of the cliffs were narrowing as large cracks appeared running up the sheer faces of the cliffs cutting off their view of the sky above. Men from both armies scattered running back toward their own side of the pass trying to get out from under the collapsing mountains. The screams of rage and hate had turned to screams of terror and Patten’s horse threw him from its saddle. Neither of the armies made it very far when the cliff tops collapsed on top of them burying them under tons of solid rock.

Patten slowly became aware of his surroundings. The lower half of his body was buried under a large boulder making it appear as if his torso ended at the rock rather than continuing under it. Several other boulders were set against each other leaving a large cavern around him.

He wondered if he was actually alive considering he didn't feel any pain.

"You are alive but not for long." The voice sounded sad as a woman came in to view. "I am called Silvia and am considered the Goddess of magic. I have stopped you from feeling pain so you wouldn't suffer needlessly."

"Can you save me Lady? I'd really like to see my wife and hold my son," he asked his voice breaking.

"I cannot, no matter how much I would like to. Your son has a great destiny and will become a great man. Many will shape him to become the man he will be. Sadly you will not be one of them," she told him.

Tears welled up in his eyes and ran back behind his ears as he lay on the ground.

"I will do one thing for you before you pass on Patten." She waved her arm and a view Patten's wife Sophie came into focus. She was staring intently at the baby in her arms that had her finger wrapped in its tiny fist.

Silvia smiled as the scene faded and looked down at Patten. His eyes were open and clouded over with a smile that slowly faded from his face. She reached down and closed his eyes before vanishing from the area.

Two boys in their teen years sat on an old fallen tree down by the "big" pond. The other pond was little more than a mosquito farm in the middle of summer. The pond was their favorite spot to hang out after chores, it was just deep enough to have fish in it and plenty big enough for all the local kids to swim in. They'd planned to talk and daydream the last of the day away like normal, looking out over the small community that had sprung up around Mr. Phillips’s farm.

They could see the manor house of Mr. Phillips up on the short hill to the right and just make out the neat rows of clay tile roofs where most of the workers and their families lived. As the houses rounded the hill they changed to shops and store fronts. None of the houses or stores where built on the hill - that area was left as a park and town square. There were just two buildings closest to them, the longer building housed a dozen single rooms, Alec’s being on the end, and most of the unmarried field hands lived in it. The other was the Commons where most of the hands and other farm workers ate, with the kitchen on the end where his Aunt
Karen was the head cook and had her room off to one side.

It wasn't a bad place to live and it was home. A good three days travel from the capital, Kingston, it didn't have a name really, most just called it Mr. Phillips’s farm. The majority of the children from the small community were taught a basic education by Aunt Karen during the day and who also dealt out punishments when necessary while their parents worked. Almost all of the kids lived in town, even Alec's "partner in crime", Jake. His father was the local butcher, whereas Alec was an orphan being raised by his Aunt Karen. Alec’s father had died shortly after he was born, in the great battle "The Slide", and his mother having died of the wasting sickness when he was only two. The only parent he knew was Aunt Karen, though she didn't play favorites.

Both boys craned their heads around fast at the sound of the back kitchen door being thrown open then slammed shut. It was a sound they’d both had heard way too many times, seeing as there was only one person who could get away with slamming that particular door, Alec's Aunt Karen. They both waited expectantly both fearing yet knowing they would hear Aunt Karen's high pitched voice yelling out soon.