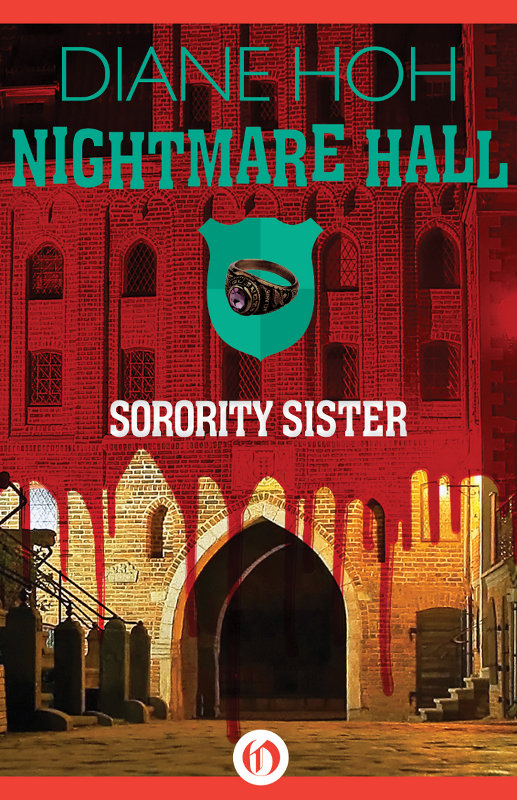 Maxie ran her finger slowly over the letters on her new sorority sweatshirt.

She couldn’t believe they’d actually pledged her. Out of all the girls who’d rushed Omega, she was one of the few — the lucky few — to be selected.

Everyone knew Omega Phi Delta was the best sorority on campus. Omegas were the coolest girls. They dated the most gorgeous guys and threw the wildest parties.

Becoming an Omega was like a dream come true for Maxie.

But the dream was about to become a nightmare.

Because something was terribly wrong at the Omega house.

I
T BEGAN SLOWLY, WITH
little things, so at first the sisters of Omega Phi Delta didn’t even realize anything was wrong.

On Saturday morning, Maxie McKeon and Tinker Gabrielle were hanging out in their room at the Omega house, when Erica Bingham, Omega’s president, appeared in the open doorway.

She was frowning. “I can’t find my jewelry box,” she informed the roommates. “Have either of you seen it? It’s big, and lacquered in black with an Oriental print painted on the top, remember? Tinker, you said something about it when you were in my room last weekend.”

“I said it was pretty,” Tinker agreed. “You can’t find it? How could you lose something that big?”

Erica stood up very straight, wide shoulders stiff in her gray university sweatshirt. “I didn’t
lose
it, Tinker! It was on my dresser yesterday afternoon. I remember getting my pearl earrings out — the ones my grandmother gave me — to wear last night.”

“Was the jewelry box there last night when you came home?” Maxie wanted to know. “When you took the earrings off?”

Erica shook her long, blonde pageboy. “I don’t know. I was out dancing at Johnny’s Place, and I was so tired when I got back, I just stuck the earrings on my dresser. I didn’t notice the box was missing until I straightened my room this morning. I’ve been looking and looking, and I can’t find it anywhere. Not only is it not on top of my dresser where it belongs, it is
not
in my room.”

Maxie and Tinker exchanged a concerned glance. They were both thinking the same thing. Erica was the most organized person in the house. She was the one everyone else went to when they were hunting for a pair of scissors or the sewing kit or a flashlight. She always knew where everything was.

And now she couldn’t find her own jewelry box?

“We’ll help look,” Maxie offered. In shorts, T-shirt, and bare feet, her dark hair bobbing on her shoulders, she padded down the hall with Erica and Tinker. “If we don’t find it in fifteen minutes, you’re on your own, Erica.”

They didn’t find the jewelry box.

Tears of frustration filled Erica’s eyes. “The ring my grandmother gave me when I graduated from high school is in that box,” she said.

“You didn’t
lose
it, Erica,” Maxie pointed out loyally. “You never lose anything. I think you should tell Mildred the box is missing.”

Mildred was Mildred Booth, Omega Phi’s housemother and cook. She would
not
be happy to hear that something of value was missing.

Maxie wasn’t happy about it, either. She loved Omega house. Living in Lester dorm when she first arrived on the campus of Salem University had been fun. She’d made new friends there. But after the first Omega party, she knew this was where she belonged. The girls were all so nice and so much fun. She couldn’t wait to belong. And once she’d been initiated she’d found it was even better than she’d expected. She was proud to be seen in her Omega Phi sweatshirt. Now she always had a party to go to, a group to hang out with. College was more fun than ever.

It had been a major disappointment when Tinker hadn’t been pledged at first. But halfway into the semester, one of the pledges had dropped out of school, and Tinker had gleefully taken her place, moving in with Maxie. Now, in March of second semester, Maxie could hardly remember living at Lester. If Jenna Dwyer, her ex-roommate at Lester and still her good friend, and Brendan Rafferty, her boyfriend, weren’t around to remind her, she’d feel as if she’d always lived at Omega house.

And in all this time, from late October until the end of March, there had never been any trouble at the sorority house. None.

Now this. Erica’s jewelry box missing. Maxie didn’t like the way that made her feel. Off balance, as if the planet had suddenly tilted sideways. Or at least Omega house.

Maxie and Tinker went back to their room, telling Erica to come and get them if she needed support when she approached Mildred with the bad news.

“Keep looking and asking around in the meantime,” Maxie suggested as they left Erica’s room. “Maybe someone just borrowed it.” But she didn’t really think anyone would do that. Not without permission. A lot of borrowing went on in the house … clothes, hair dryers, class notes, occasionally even a few dollars, but never without asking first.

Their mood had changed when they returned to their room with the flowered wallpaper, white trim, and rose-colored carpet. A row of windows along the far wall let in ample sunlight on what had turned out to be a beautiful late-winter day.

“You don’t think someone actually
took
Erica’s jewelry box, do you?” Tinker asked nervously, running a hand through her very short, almost-white hair. A track athlete, Tinker, in direct contradiction to her name, was tall and broad-shouldered. Her real name was Belle. As a small child, her parents had nicknamed her Tinker Bell. When, as an adolescent, she experienced a sudden growth spurt, they refused to drop the nickname. Tinker seemed to find that really funny. “The Tinker Bell in Peter Pan is no bigger than my hand,” she told Maxie laughingly. “When they say love is blind, they must mean parents.”

“Do I think someone took the jewelry box?” Maxie asked. “I don’t want to believe that someone took it. But we looked everywhere in that room. It’s not that easy to lose something so large.”

“We should ask around, see if anyone knows anything. Candie might know something.”

“Candie might know something about what?” a voice asked from the doorway.

A girl as tall as Tinker but thinner, with a strikingly beautiful face and long, auburn hair, stood in the doorway. “I am incredibly smart, so I probably have the answer. Ask away.” She moved into the room and sat down on Tinker’s bed.

Maxie recalled the first time they’d met. It was at a rush party, and the girl had been introduced to Maxie and Tinker.

“Candie Barre?” Maxie had whispered later to Tinker. “Is she kidding? Who would name a little kid Candie Barre?”

And from behind her, someone had laughed. “My mother,” Candie Barre’s voice had said in Maxie’s ear. A horrified Maxie had turned around, knowing her face was scarlet, to face the smiling girl. “But it could be worse, right?” the girl had continued. “She could have named me Chocolate. Parents should be forced by law to call their children ‘Baby’ until the kid is five or six and can pick its own name, right?”

Horribly embarrassed, Maxie had forced a laugh. “You’re right. Only a handful of people on this campus know that my real name isn’t Maxine. It’s Maximilia. Definitely
not
a name I would have picked for myself.”

“Well,” Candie had said good-naturedly, “now
I
know. But I’ll never tell.” Maxie had laughed then, and decided she liked this tall, very attractive girl with hair the color of chestnuts.

Tinker had laughed and added, “Well, neither of your names is worse than someone my size being called Tinker.” Glancing at Maxie, she had added, “It would sound much better on a shrimp like you.”

Maxie glowered. She drew herself up to her full height of five feet, three inches and said indignantly, “I have
stature
that has nothing to do with mere inches! And I have an easier time finding shoes to fit, so there.”

When Maxie learned that she had indeed been pledged to Omega Phi, Tinker was the first person she’d shared the news with. But Candie was the second.

Candie loved being an Omega even more than Maxie. Her mother had been president of the sorority in her senior year at Salem, some twenty-two years earlier. “I’ve been hearing about ‘the sisterhood’ ever since I was born,” she told them, “and I couldn’t wait to get here. I was sure my mother was exaggerating. But she wasn’t.”

Horror flooded the pretty face. “You can’t mean it’s been stolen!” she said in a voice filled with disbelief. “I know other houses and some of the dorms have had some problems with thieves, but not us! Not here!”

“Oh, we don’t know that it was stolen,” Tinker said quickly. “Maybe it just got … misplaced or something.”

“Misplaced?” Candie shot her a cynical look. “I’ve
seen
that box. It wouldn’t be easy to misplace. Besides, it’s not as if Erica lugs it around with her.”

“I don’t know about you guys, but I don’t want this getting around on campus,” Maxie said.

“Oh, of course not,” Candie said, her dark eyes wide. “That would be awful! We all have to promise not to tell a soul.”

But Maxie had a sinking feeling that if the jewelry box really had been stolen, they wouldn’t be able to keep it quiet for long. Bad news traveled, very fast on campus. And a lot of people who disliked sororities and fraternities would be delighted.

That included Brendan and Jenna. Brendan would curl that gorgeous upper lip of his and say something like, “So someone over there has sticky fingers, eh?” And Jenna would toss her dyed bangs, stick her chubby thumbs in the straps of her coveralls and say, “Nothing like that ever happens at Lester.”

Which probably wasn’t true at all, but you’d never get Jenna to admit that.

At lunch, Maxie noticed that Erica’s eyes were pink-edged. She’d been crying about her grandmother’s ring. When she’d finished eating, Maxie offered to help her search. She didn’t really expect to find the box downstairs, but they’d already looked throughout the second and third floors, so she began in the living room. She’d just moved on to the kitchen when the doorbell rang.

“I’ll get it!” she shouted, and hurried down the hall to the front door.

A young woman in a messenger’s uniform stood on the porch. “Package for Erica Bingham,” she said, extending a large box wrapped in plain brown paper. With her other hand, she extended a clipboard. “You her?”

“Perfect timing,” Maxie murmured. A package might cheer up Erica.

“Excuse me?” The messenger peered at her from behind sunglasses.

She signed with a flourish, then closed the door and hurried up the stairs to Erica’s room. Knocking on the closed door, she called, “Erica! Package for you.”

The room was a disaster. Bedding was upended, drawers tilted open, clothing spilling out, closet doors ajar, books out of bookshelves, sprawled on the floor. In her frantic search, Erica had left nothing untouched.

“What
is
it?” Erica cried impatiently when she saw Maxie.

“I said, you got a package. I brought it right up.” Thrusting the box forward, Maxie moved into the room. “Can I … can I help you look or help you straighten up or something?” she asked tentatively.

The Honours by Tim Clare
In Search of Bisco by Erskine Caldwell
The Good Soldier by L. T. Ryan
The Club by Tara Brown writing as Sophie Starr
Frenchtown Summer by Robert Cormier
The Counterfeit Crank by Edward Marston
The Return of the Black Company by Cook, Glen
The Fallen Crown by Griff Hosker
Sugarbaby by Crystal Green
Betrayal by Julian Stockwin