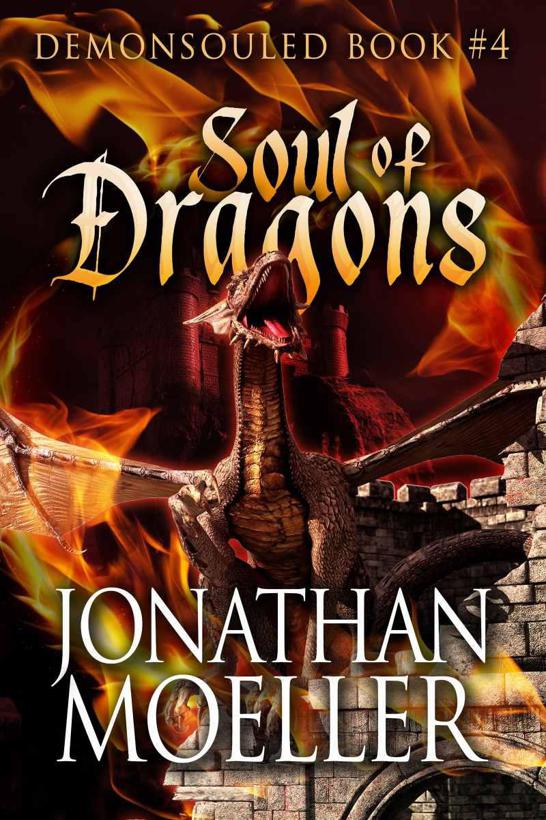 MAZAEL CRAVENLOCK
stands victorious over all his foes, and wishes nothing more than to live quietly in peace, overseeing his lands. Yet a relic of the ancient world, a thing of black sorcery, has been unearthed, a weapon that threatens to turn the Grim Marches to a realm of corpses.

ROMARIA GREENSHIELD
has mastered herself at last, the human and Elderborn halves of her soul in harmony. Free from her past, she travels north to start a new life in the Grim Marches.

LUCAN MANDRAGON
is trapped in the netherworld between life and death, imprisoned by his own folly. Haunted by visions of his mistakes, tormented by memories of his past, Lucan finds himself the prey of a spirit both mighty and corrupt.

And the price to escape might consume all he has left…

CORVAD
burns with the blood and power of the Demonsouled. He will take up the sword of the Destroyer, and throw down the realms of men.

And once he claims the ancient relic for himself, all the world shall be his…

MOLLY
has lost everything she holds dear, and has no reason left to live.

There is only one cure for her loss, one vengeance she can take for her pain.

Other books by the author

Child of the Ghosts

Ghost in the Flames

Ghost in the Blood

Ghost in the Storm

Ghost in the Stone

Ghost in the Forge

The Dragon's Shadow (World of the Demonsouled novella)

The Wandering Knight (World of the Demonsouled short story)

The Tower of Endless Worlds Series

The Tower of Endless Worlds

A Knight of the Sacred Blade

A Wizard of the White Council

The Destroyer of Worlds

Driven and Other Stories

Angel Sword and Other Stories

This novel is a work of fiction. Names, characters, places and incidents are either the product of the author's imagination, or, if real, used fictitiously. No part of this book may be reproduced or transmitted in any form or by any electronic or mechanical means, including photocopying, recording, or by any information storage and retrieval system, without the express written permission of the author or publisher, except where permitted by law.

Mazael Cravenlock turned his head just as green lightning exploded from the sky and tore into the earth.

An instant later the wave of hot air from the blast slammed into him, tugging at his cloak and the mane of his horse, an ill-tempered destrier named Hauberk. The horse whinnied in alarm, even as another blast screamed out of the sky, ripping a nearby tree to burning shreds. Behind Mazael, both his men and Sir Gerald Roland's men shouted in alarm. But there was no panic. The knights and armsmen dropped from their horses, while the archers strung their bows and seized quivers of arrows.

Every last man was a veteran of the war against the Malrags.

Every last one of them had seen men die at the hands of the Malrags.

As they, too, might die, if one of those lightning bolts landed with any accuracy.

A tall, thin man in a long black coat hurried to Mazael's side, his clothing a stark contrast against his pale face and blond hair. Even as he ran, Circan muttered a spell, his hands flying through arcane gestures. The wizard thrust his hand into the sky as another green lightning bolt screamed out of the cloudless sky. Blue light flashed around his hand, and the blast rebounded from Circan's spell to rip a tree in half.

Circan swayed on his feet. “My lord, you must find the Malrag shaman quickly. I do not know how many more blasts my spells can deflect.”

Mazael gave a sharp nod. Even Lucan Mandragon, one of the most powerful wizards Mazael had ever known, had difficulty deflecting the lightning spells of the Malrag shamans.

Though Lucan was in no shape to do anything, just now.

“Do you know where they are?” said Mazael.

Circan gave a sharp nod, rolling a wire-wrapped quartz crystal around his gloved fingers. Mazael had seen that spell before, knew that it let a wizard sense the presence of foes from a distance.

“Aye, my lord...a mile, perhaps a mile and a half, to the north.” Circan's face tightened in a frown. “At least two hundred of them. Approaching quickly.”

Mazael swore. He had one hundred and sixty men – one hundred and twenty of his and forty of Gerald's that had survived the great battle at Deepforest Keep. But they were veterans, and knew how to fight Malrags. If Mazael kept his wits about him, they could overcome the Malrags.

Even as the thought passed Mazael's mind, a man and a woman ran to his side. The man was tall and strong, with blue eyes and a blond mustache trimmed with razor precision. Sir Gerald Roland wore armor polished to a mirror sheen, even here in the heart of the Great Southern Forest, and carried a bared longsword in his right fist.

The woman was tall and lean, with long black hair and eyes the blue of mountain glaciers. She wore wool and leather armor, her jerkin studded with steel disks, and carried a composite bow in her right hand. The hilt of a bastard sword rose over her shoulder, and she moved with an easy, fluid grace. Mazael's men were hard fighters, accustomed to war, yet even they gave deference to Romaria Greenshield.

After all, they had seen her become a great wolf and tear the throats from her enemies, had seen her wake an army of statues to smash the Malrags below the walls of Deepforest Keep.

“Why didn't our scouts see them coming?” said Gerald.

“I don't know,” said Romaria. “They just rode in five minutes past, and claimed to see nothing. Even a blind man couldn't miss two hundred Malrags.” She lifted her face, nostrils flaring as she sniffed at the air.

“What is it?” said Mazael. He knew to trust Romaria's instincts.

And her supernaturally keen senses.

“I didn't smell them,” said Romaria. “Malrags smell of decay. Like a tumor filled with poison. I can smell them five miles off. I didn't smell these Malrags until a few moments ago. As if they appeared out of nowhere.” For an instant her lips peeled back from her teeth, making her look almost wolfish. “And they don't smell like Malrags.”

“They don't...feel like Malrags,” said Circan, hand clenched around the quartz crystal. “I know what Malrags feel like by now. I can sense the Malrag shamans. What the others are...I'm not sure.”

Mazael shared a look with Gerald. He had known the younger man for years, ever since Gerald had been a squire. They had been in numerous battles together, some of them dire, and in war Mazael trusted Gerald's judgment as much as his own.

“A shield wall,” said Gerald. “Facing the foe. The archers behind. As soon as we see the enemy, the archers release. Then we can decide whether or not to charge, or to hold the shield wall and wait for their attack. We can keep the wounded and the baggage behind the shield wall, along with the...others.”

Gerald shouted orders, and the men hastened to obey. The knights and armsmen hurried forward, shields raised to form a solid wall of steel-banded oak. Behind them the archers formed up, arrows waiting at their bowstrings. After the archers waited the baggage animals and those too injured to fight. A woman sat in their midst, dark-haired and green-eyed, an infant of a few months cradled in her arms.

Rachel Roland looked frightened, but her face held no hint of panic or despair, only a steely determination. And why not? Mazael's sister had chased the San-keth to the ends of the earth to get her son back, had found the courage to attack Malavost as the wizard prepared to murder the child. After facing such horrors, why should a few Malrags intimidate her?

She gave Mazael a grim nod and held Aldane tighter.

Behind Rachel stood a pair of pack horses, a cot stretched between them. A misshapen figure wrapped in heavy blankets rested in the cot, lying motionless. Mazael could have used Lucan Mandragon's aid against the Malrags.

But Lucan was in no condition to help anyone.

Mazael walked before the shield wall, Romaria at his side. If he could have, he would have ordered her to remain with the archers. He had seen her struck down once before, and had no desire to repeat the experience. But he knew she would not listen.

Besides, she could take her of herself in battle. Better than most of his men.

“They're coming,” hissed Circan, gazing at the trees to the north.

Mazael braced himself and drew his sword. Three and a half feet of steel blade glimmered in his fist. The sword's crosspiece and hilt had been worked with gold, its pommel shaped into a golden lion's head, jaws open in a roar. He called the sword Lion, and it had been forged in ancient times, imbued with potent magic to fight the powers of darkness, burning with azure flame when confronted with dark magic.

As it began to burn now.

Mazael saw the lines of blue light shining within the steel, saw the flicker of pale flame at the edge of the blade. Creatures of dark magic were coming.

“These wretched trees,” muttered Gerald, lifting his shield. “If we were on the plains, we could sweep aside the Malrags with one solid charge.”

“We're not in the Grim Marches yet,” said Mazael. A halo of crackling blue flame snarled around Lion's blade. “Brace yourselves!”

A moment later dark shapes leapt from the trees.

Mazael expected to see Malrags. Creatures with gray, leathery skin. Hands with six fingers and mouths filled with fangs. White, colorless eyes, and a third eye glowing in the foreheads of the shamans. Black armor, and axes and spears of black steel.

He did not expect to see a line of animated corpses burst from the trees, moving with inhuman speed, empty eyes shining with green flame. The creatures looked as if they had been dead for some time, crumbling flesh stretched tight over yellowing bones. Yet they moved with supernatural speed and power, some racing on all fours as their clawed fingers raked at the earth. Mazael had seen such creatures before. They were corpses, raised by the dark magic of a skilled necromancer.

Lion shuddered in his grasp, its azure flame burning brighter.

“Release!” bellowed one of the archers.