Soulvine 03 A Bright and Terrible Sword 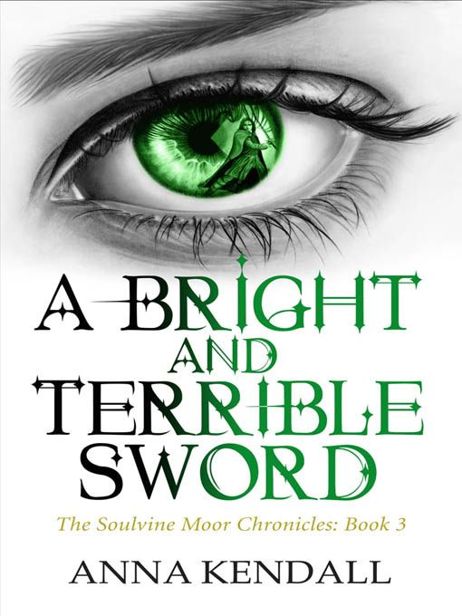 Also by Anna Kendall from Indigo:

I watched the spider inch across its web towards the tiny mouse.

Neither should have existed, not this early in the spring, and not inside the cottage. Not even in such a mountain cottage as this one, snugly built but seldom swept and smelly with droppings from the pig that the children brought inside on cold nights. But the cottage, although filthy, was warm. Spiders had hatched, baby mice had been born, and overnight this small life-and-death struggle had begun in the dim chimney-corner where I lay, still weak from my illness, on a pallet of dirty straw.

I had lain here for over a month, dependent on the good will of the cottagers who took me in. Although perhaps ‘good will’ were not the right words. Without this family of John the Small (he had no other name), I would have died. And
with
this family—

‘One Hand!’ shouted Bets, the oldest girl, hurling herself down the ladder from the loft. They all shouted, all the time. She raced towards me.

‘Hush your mouth!’ cried Mrs John, coming from the bedroom, which was the only other room the cottage possessed. ‘You’ll wake him!’

‘He’s awake!’ screamed Bets, jumping on top of me. It hurt, even though she weighed so little. Every move of my body still hurt.

‘Get off!’ yelled Mrs John, plucking her daughter up by her neck as if Bets were one of her scrawny chickens. ‘Go get the wood!’

‘That be Ned’s labour!’ Bets cried, suddenly all wounded injustice. She had not noticed the spider web.

‘Do it!’ Mrs John roared. She gave Bets a shove towards the door. To me she said nothing, as always.

Inches from my face, in the dim corner, the spider had reached its prey. The mouse was less than two inches long, although it had grown old enough to venture from its mother’s nest in the wall and be caught by the sticky strong threads closest to the floor. The spider was huge, half the size of my thumb. As Mrs John lit a rushlight and stuck it into the holder on the wall, the spider’s hairy body glittered a dark red.

‘I be hungry!’ yelled Ned, shooting down the ladder. The other three children followed. From the bedroom the baby wailed.

‘Then fetch the water for gruel!’ Mrs John bawled, ‘or none of ye eat! John! Get up! Get up now!’

Robbie loomed over my pallet. ‘Are ye still sick then, One Hand? Are ye dying?’

‘That be Bets’s labour!’

Mrs John slapped both boys and shoved them to the door, all the while crying towards the bedroom, ‘Get up! Get up, ye lazy no-good!’ The baby screamed. The two smallest children had just made it laboriously down the ladder, although Jemima fell the last three rungs, lay in a crumpled heap on the floor, and screeched.

The red spider hung with four legs in its web and four on the struggling mouse. Its fangs closed on the mouse’s skin.

John the Small slouched from the bedroom, scowling at his wife. ‘Will ye not let a man rest, woman?’ he bellowed, reached inside his half-tied trousers, and scratched his privates.

I had no idea why these people had saved my life. John the Small had found me collapsed in the snow on a track that led down the western mountains towards The Queendom. I had shivered and raved with illness. Unable to lift me – he was barely four feet tall – he had brought his wife and two oldest sons, of nine and ten, and the four of them had dragged me inside, dumped me on the hearthside pallet, and left me there for a month. It was an incomprehensible act of kindness towards a stranger, for although the season was wrong for plague, I might have carried any number of other diseases that could have killed them all. Incomprehensible, too, as since bringing me inside, husband and wife had almost completely ignored me. Neither ever addressed me. The children brought me food when they remembered. John and Mrs John treated me as if I were part of the pallet itself, and of far less interest than the pig. I had not washed in a month. I was not alone in that, and smelled no worse than the others.

The mouse gave a last desperate struggle to free itself. The spider hung on. The web trembled and its bottom strands tore.

‘It be warm out!’ Bets cried, coming back inside with an armload of wood. She dropped it onto the floor, where it clattered and rolled. ‘Spring!’

‘And the field not even turned!’ Mrs John yelled, rounding on her husband. ‘Ye’ll never get the planting done in time!’

‘It be spring!’ Ned bellowed, sloshing inside with the bucket of water. The bucket leaked. A trail of water spread across the floor as Mrs John lugged the bucket to the hearth and dumped the water into the kettle.

The mouse went still. Its struggles had further torn the web, and now only a single strand connected the spider
to the web above. It began spinning more threads to bind the mouse to the web.

‘Well, bring the wood to the fire, girl!’ Mrs John yelled at Bets. ‘Be ye a half-wit? Jemima, stop that wailing or I’ll give ye something to wail about!’

Jemima did not stop wailing. The baby bawled in the bedroom. The pig came in the open door and the three older children raced after it, yelling.

I sat up. It was the first time in a month, it took me a long time, and it made my head spin. But from this position, I could reach the web. Slowly I put out one finger on my one hand until it touched the centre of the web. The spider silk felt sticky, but strong. My touch did not break it, not even when I pushed on the interwoven strands.

The family sat or stood – there were not enough chairs – around the wooden table, slurping gruel and screaming at each other. However, my unaccustomed movement attracted attention. Mrs John looked right at me. Never before had she addressed me directly, so it felt almost shocking when she did.

‘Ye call out in yer sleep, One Hand.’

I went still. My old fault, and the cause of so much grief in my life.

‘Look – there be a web!’ Robbie shouted.

Mrs John and I stared at each other.

‘It hold a spider!’ Bets screamed.

‘Get it!’ Ned bawled. The two boys leaped from the table and scrambled over me to the wall.

Robbie’s arm sliced through the web. It gave way. Ned, bouncing painfully across my legs, grabbed a stick of wood and smashed it down on spider and mouse alike.
I held my breath. The country folk, unlike those of the palace, are close enough to death to believe in the old ways. If in my sleep I had blurted out the words
hisaf
or Soulvine Moor …

Mrs John said, ‘Who be Katharine?’

‘Got it!’ Ned bawled, and the web hung in tatters.

‘Katharine’, not ‘Maggie’. I had called not the name that filled my thoughts as I lay on the pallet week after week, but the name I tried nightly to forget. My mother’s name, my sister’s name. The name that used to invade and terrorize my dreams and did so no longer. Just as I no longer crossed over to the Country of the Dead. Whatever was happening there, my part was to stay away. Mother Chilton and her witch apprentice, Alysse, had made that very clear to me. I was to stay out of the war they waged with Soulvine Moor and, instead, go home to Maggie and my unborn child.

There was nothing I wanted more. Maggie, with her fair curls straggling over her forehead, her tart competence, her love for me that had been undeserved and unrequited for so long. I yearned to go back to Maggie, living in Tanwell with her sister as she awaited the birth of our son.

And I had lost so much time already! Mountain travel in winter had proved much harder than I had expected, especially with one hand. Time and again I had been forced to hole up at some remote farm or rough inn while snow storms raged outside. I would have died without Mother Chilton’s money to buy such sanctuary. Then, nearly at the base of the jagged western mountains and nearly into spring, what did I do but fall ill and into the wild household of John the Small.

Maggie must, by now, be but a few months away from her confinement. It had been summer when I lay with
her on that fragrant hillside, amid the scents of wildflowers and the heavy drone of bees.

I did not answer Mrs John about the name ‘Katharine’, and a moment later her attention flew to Ned and Robbie, who were tossing the dead baby mouse back and forth across the table. ‘Get that dung out of here – what ails ye?’ she bawled. ‘Yer daft, the pair of ye! Out! Out!’

The boys fled, shouting, outside. The morning chaos continued. Through the open door came sunshine and the intoxicating scent of sweet warm air. It was indeed spring. I must recover completely from my illness, must become strong enough for travelling, must return to Maggie. If, after all I had done, she would still have me.

Bets cried, ‘Look! One Hand is standing up!’

She barrelled across the room, jumped on me, and knocked me back down.

I persisted. Day after day I forced myself to stand, to walk, to strengthen my withered muscles. When I could, I went into the woods and gathered bird eggs, dug roots, found last autumn’s nuts, brought back firewood – anything to help repay Mrs John’s rough kindness. I had money left, sewn into a secret pocket of my cloak, but I didn’t offer any, sure in the knowledge that this family would simply take it all. Mrs John took my contributions to her household without comment. But the day Robbie tried to knock me over and I swatted him away with my one good hand, remaining on my feet, she smiled.

razorsedge by Lisanne Norman
Doom Star: Book 02 - Bio-Weapon by Vaughn Heppner
When You Were Mine [Second Chances 2] (Siren Publishing Classic) by Michelle Roth
The Moves Make the Man by Bruce Brooks
Threshold by Caitlin R Kiernan
Slayer's Reign in Blood (33 1/3) by Ferris, D.X.
The Dragon Lord's Daughters by Bertrice Small
In the Midst of Life by Jennifer Worth
Escaping Heaven by Cliff Hicks
Could This Be Love? by Lee Kilraine