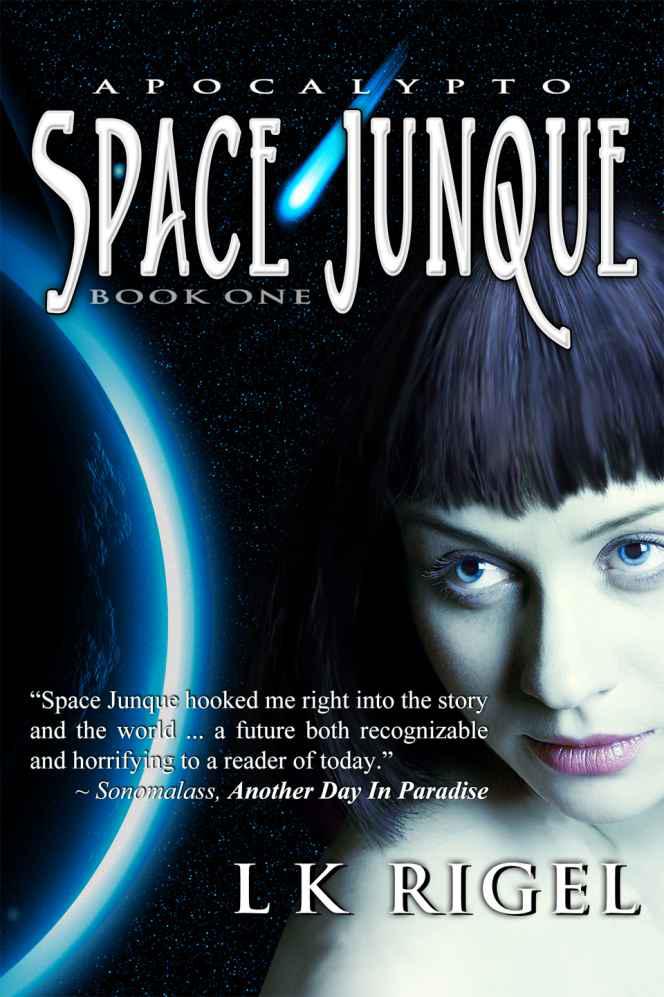 The DOGs want to destroy the world. The gods want to make a new one. The trick is to survive both.

The world at the end of the 21st century is on the brink of ecological collapse, destroyed by corrupt politics and unchecked environmental damage. Hydroponics agronomist Char Meadowlark has become a recluse. Warned about an impending attack by the eco-terrorist Defenders of Gaia, Char flees to the airport.

When the DOGs strike in the midst of Char's escape, pilot Jake Ardri offers her only hope of survival. They take his shuttle the
Space Junque
to the orbiting Imperial Space Station, the off-planet seat of world government.

When the conflict goes global and the planet threatens to implode, ancient gods return to take control of humanity and impose a new world order. Char is caught up in a divine plan to save the world - but it will take all she's got to get through the apocalypse alive.

This book is a work of fiction. The names, characters, places, and incidents are products of the writer's imagination or have been used fictitiously and are not to be construed as real. Any resemblance to persons, living or dead, actual events, locales or organizations is entirely coincidental.
All Rights Are Reserved. With the exception of fair use excerpts for reviews and critical articles, no part of this book may be used or reproduced in any manner whatsoever without written permission from the author.

The DOGs want to destroy the world. The gods want to make a new one. The trick is to survive both.

The planet at the end of the 21st century is on the brink of ecological collapse, destroyed by corrupt politics and unchecked environmental damage. Hydroponics agronomist Char Meadowlark has become a recluse. Warned about an impending attack by the eco-terrorist Defenders of Gaia, Char flees to the airport.

When the DOGs strike in the midst of Char's escape, pilot Jake Ardri offers her only hope of survival. They take his shuttle the
Space Junque
to the orbiting Imperial Space Station, the off-planet seat of world government.

When the conflict goes global and the planet threatens to implode, ancient gods return to take control of humanity and impose a new world order. Char is caught up in a divine plan to save the world - but it will take all she's got to get through the apocalypse alive.

Let's Get the Hell Off This Rock

In Which Char Sees Jake's Junque

The Glory and the Goddess

Let's Get the Hell Off This Rock

Ghosts would stay off the roads. Why risk an encounter with Homeland Security? But when Char Meadowlark floored the Malibu, their heads popped up all over the fields along Baseline Road.

By the time any of them realized she wasn't IHS, she'd be out of range even if one had a vehicle. She just hoped some ghost kid didn't wander out in front of her.

This stretch of putrid fields was condemned by the EPA. While the corporate owners appealed court orders to clean the site, the tainted rice and flax had become home to ghosts and vermin and great white herons. It was said the fields were so polluted that raptors wouldn't hunt here.

Not that Char believed that stuff about raptors.

At the train tracks a heron perched on the listing stop sign. No train would come, but out of habit she slowed. The bird seemed to disapprove of her classic 2031 Chevy. Yeah, its oil-based fuel system was embarrassing, but she had the carbon credits.

Besides, she had to make the launch, and she had no other way to get to the airport.

Smoke billowed up from downtown Sacramento, black on gray rising into the orange afternoon sky. She slid the zoom on her sunglasses' camera and projected the image onto the windshield. 801 K Street was burning, flames shooting through smoke on the top floors.

Mike had better be right that the launch was still secure.

The DOGs have higher priority targets.

Maybe the fire at K Street was just another maintenance issue. The old capital city had gone to hell since the Imperial Congress abolished California and the other state governments.

On Interzone-5 she raced past a few CitiCars in the commuter lane, risking nothing but the psychic wrath of her eco-betters. No cops gave speeding tickets anymore. Waste of personnel.

Get to the terminal and don't bother parking. Just leave your car on the street. Go to the shuttle boarding gate. You're on the list.

She had thought Mike was being overdramatic, demanding she come up to the space station for a visit. He was just trying to scare her out of the cocoon she'd crawled into after what happened to Sky. And Brandon.

Well, it was working.

The airport was guarded by Imperial Homeland Security. No enviros got past them, not even the DOGs. At the gate, two cars waited ahead of her. While a guard chatted with the first driver, more vehicles pulled up in line.

Forty minutes to launch. Cutting it close, but Mike had said her ID would put her in the terminal's express queue.

The chat at the head of the line disintegrated into an argument. IHS poured out of the guard shack and surrounded the vehicle with weapons drawn, officers screaming at the occupants to get out.

The car in front of Char pulled out of line and drove away. Two more behind her followed. Everybody hated IHS. She had the urge to leave too, despite being such an upstanding citizen. Hell, at university, she and her sister had both won Imperial internships. People called them the hydro twins. Sky was a hydropower engineer and Char a hydroponics agronomist.

IHS didn't care about that. Everybody was a potential person of interest.

Cripes. Ghosts got out of the car. What possibly made them think they could pass? These must be new if they still had the will to mix in society, but even the kids were just skin and bones. Poor things.

On IHS recommendation ghosts had been declared anathema by Imperial decree. Rights advocates argued that ghosting was not a disease but a mutation. Their theory: after exposure to a critical level of toxicity, the ghosting gene switched on and a person became pathologically apathetic.

Ghosts didn't eat, didn't work or sing or play. Didn't make love. No one knew why they didn't die of starvation.

The officers took the ghosts away and moved their car, motioning Char forward. She showed the ID card Mike had emailed half an hour ago.

"Sorry you were delayed, ma'am." The guard smiled pleasantly and waved her through. As the gate slid open, she let out her breath and cruised onto the airport loop.

Cars and buses were parked at haphazard angles all over the road, more of them the closer she got to the terminals. Two hundred yards from the buildings, she abandoned the Malibu.

She slung her backpack over one shoulder. The world might implode, but she'd have a toothbrush and fresh underwear. She zipped her ID into her flight pants.

The comfortable loose pants with multiple zippered pockets on the legs had come into fashion when Vacation Station opened to civilians. Char never thought she'd wear them on an actual flight. Too bad her top was a spandex tube with a single strap, not at all proper for the Imperial Shuttle, but Mike had said to waste no time changing clothes.

A sickly blend of excitement and nausea swept over her. Of course she wouldn't see the car again. It would be stolen as soon as things calmed down a bit, well before she got back. But she

coming back, was she?

It was the ghosts. There were so many in the fields this time. Too many. The Pacific Zone must be headed for quarantine, and Mike knew it. He couldn't breach security by telling her, but he could invite her up, then send her to a clean zone when she returned to the planet surface.

He was a good guy. The best. He'd really watched out for her since Sky was lost. If only Sky had married Mike when he asked. They might have lived together. Sky would be up there above the clouds today instead of buried half a mile below ground.

Char set the Malibu's admin program to ANY DRIVER and left the carbon credit voucher in the glove box. There was still gas in the tank. Someone who couldn't catch a flight might use it to get somewhere safe.

Safe
. As if the word meant something.

At the terminal sidewalk the crackle of ack-ack filled the sky. A private jet without greenlights escaped through the smoke of tiny explosions. Enviros must have set up an anti-aircraft battery outside the airport's perimeter.

Not DOGs. Please, not DOGs.

Inside, the air buzzed with a low hum of impending hysteria. Monitors showed the burning K Street building on a loop spliced with random scenes of mayhem and

in the crawl. Nothing unusual in that, but the talking heads did seem more breathless than usual, excited. Something different was happening. Real news.

"The DOGs call themselves radical environmentalists," the news anchor said to a familiar expert. "But they destroy another little piece of the planet every day, don't they, Don?"

"DOG stands for Defenders of Gaia, Nancy, so you're right. It is an ironic name. They believe the only way to save Gaia, as they call the earth, is to wipe out the technology which they posit is destroying the planet."

Dawn of the Planet of the Apes: The Official Movie Novelization by Alex Irvine
Dead Funny by Tanya Landman
Changing Times by Marilu Mann
Bjorn! on the Fourth of July (A Barbara Marr Short Story) by Cantwell, Karen
Man of Honor (Battle Scars) by Diana Gardin
30 Pieces of a Novel by Stephen Dixon
Story of My Life by Jay McInerney
A Voice in the Distance by Tabitha Suzuma
Gift of the Gab by Morris Gleitzman
The Ultimate Guide to Sexual Fantasy by Violet Blue