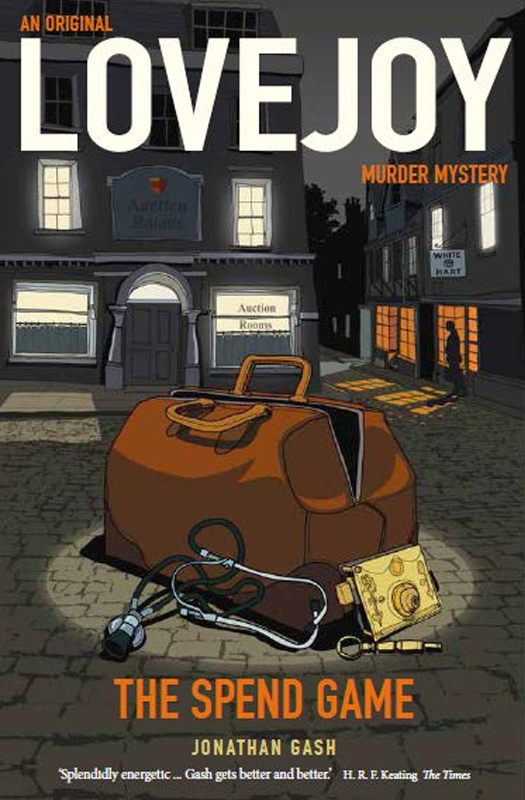 To Wu Ch’ang, ancient Chinese god of wealth and good luck who hands out gold mountains to the humble and pious of heart, this book is humbly and piously dedicated.

A story for John and Julie, Susan, Julia and the Port Sunlight Players, Pat and Roy, Elizabeth. 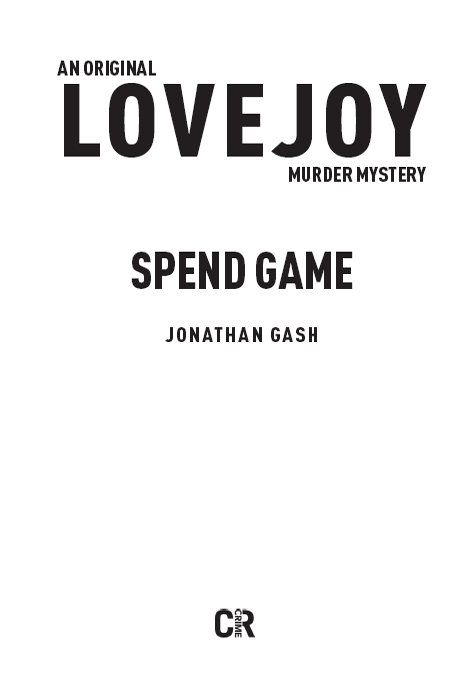 First published in Great Britain in 1980

This paperback edition published by Constable Crime,
an imprint of Constable & Robinson Ltd, 2013

The right of Jonathan Gash to be identified as the author of this work has been asserted by her in accordance with the Copyright, Designs and Patents Act 1988

N
O MATTER WHAT
people say, you can’t help getting into trouble. And the antiques game is nothing
but
trouble – beautiful, lovely trouble all the bloody time.

This story starts where a pretty but terrified woman was holding my hand in a thunderstorm. We were looking down at the dead man in the ditch, and I was frightened too. In fact, I bet I was more scared than she was, because I knew roughly why he’d been killed. She didn’t.

The rain was hurtling down in great falling clouds. We were soaked and it was pitch-black. Occasional sheets of lightning washed the silent night sky into sudden silver, letting us see his face and our own aghast paleness. It was my friend from the auction, all right. We call him Leckie. The rumble of thunder from the east seemed to shut the light away and Sue and I hung on to each other’s hands for dear life. We slithered down the embankment from the road, calling out to see if he gave any sort of answer, though I think we both realized he was killed the moment he was flung clear of his tumbling car.

‘A torch, Lovejoy,’ Sue said frantically. ‘We need
a torch.’ I was impressed. Women are so much more practical. Often useless, but permanently practical. She kept on about a torch, getting me mad.

‘I’ve not got one.’ I was literally shaking.

She sounded snappy. ‘Everybody with any sense keeps a torch in their car.’

‘I’ve not got one,’ I said back doggedly.

‘You should always keep –’

‘Headlights!’ Sue exclaimed, tugging at me. ‘Lovejoy, your headlights! You can turn your car this way with the lights on –’

‘– Then we can see what we already know,’ I finished for her. ‘That he’s already dead.’ She was getting me madder, as well as more frightened. What if the big car came back? It had been deliberate, blundering into a lunatic swerve and chucking Leckie’s little car into the air like that.

‘Have you a lighter?’

‘Then feel his pulse.’ This sort of thing turns my stomach over, but Sue might be right. You never know till you make sure.

We’d seen his flying body leave the car and hit the roadside tree, to flip brokenly aside towards the ditch. All these unlit country by-roads in East Anglia have ditches lined by hedgerows, though they were no shelter. Sue’s blonde hair was straggling across her face from the rain. We couldn’t get any wetter. The sheet lightning showed us how poor Leckie lay crookedly in the glistening mud, folded into the spattering ditch water, his left shoulder humped under a grassy overhang and his overcoat crumpled up above his waist. Leaving Sue’s hand I slid down
towards the muddy bottom and reached along Leckie’s arm, thinking, Where the hell do you find a pulse? His hand felt warm. Dead, but warm. For a minute I pressed anxiously around his wrist, with no real hope of knowing what I was doing.

‘I don’t even know what a bloody pulse is,’ I hissed back, though why we were whispering in a downpour at the bottom of a ditch with the nearest village six miles away, God alone knows. Death does it, makes whispers. Sue clucked from exasperation and slid down beside me with a muddy splash.

I pressed Leckie’s hand towards hers. She gave a small gasp as her fingers touched the cooling skin, but gamely stuck to the task. Every so often I listened for an approaching car, just in case. There had been two men in the sleek motor that had seen Leckie off. They had seemed casual enough to come driving coolly back with the intention of ‘finding’ the accident and reporting it to the police. They might have enough nerve, but would they be so stupid? They’d performed a swift, silent search, very businesslike and rather sinister.

I pulled her up on to the tall roadside grass. We sloshed back to where my contraption was parked in the muddy gateway of a large field. The lightning was still busy battering the low valley. On the underbelly of the stormclouds to the south you could see the orange
glow from our local town’s lights, some miles of wet fields and woods away.

‘Back? To Medham?’ I’d attended the antiques auction in Medham that afternoon. It’s my game. I’m an antiques dealer.

‘But the police, Lovejoy.’

I opened the door and pushed her in. The trouble with women is they think everybody else is law-abiding and peaceable. Their belief happens to be untrue but I usually go along with them to save bother.

‘You
will
phone the ambulance, Lovejoy?’ Sue demanded as I climbed in beside her.

I pretended to reflect a split second, then gave her a smile I hoped was reassuring. In that instant, dwelling on the relative usefulness of honesty and untruth, I settled swiftly for falsehood. It’s more predictable, especially when you’re in adverse circumstances like now. I’ve found that.

‘Of course,’ I said. I switched the engine on and gunned my archaic little bullnosed monster into creaking action. I drove for a few hundred yards by memory and the occasional lightning flash, one hand on the wheel and peering out into the driving rain, until Sue could stand it no longer.

‘Silly me!’ I switched them on and notched up to an aggresive twenty, which for me is flat out with a following breeze.

‘What is the matter, Lovejoy?’ Sue was eyeing me sideways as I drove.

‘It’s the shock, love,’ I said. It was that all right,
because I knew something about Leckie. The more I thought, the more I remembered. We’d known each other on and off for some years.

‘They didn’t even go down to see if he was all right,’ Sue said angrily. ‘Those two men. Just getting out and walking over like that, looking in the car and on the grass. They didn’t even seem to
care.
You should report them.’ (Note: not we, nor I. You, Lovejoy.
You
should do the reporting. That’s a typical woman for you – essential but woolly-minded.)

‘You should, darling,’ she urged me earnestly. ‘Why, they seemed more interested in the poor man’s car than –’

I didn’t want her dwelling on that aspect too much so I broke in hastily. ‘Do you suppose
they
reported the accident?’ I asked innocently. After that we drove on in silence. Sue’s not daft. She didn’t think so either.

I got back to the main road, thankful for the absence of that powerful car’s immense staring lamps and the pair of cold malevolent lunatics that drove it. The storm was still on, but there was plenty of traffic now, switch-back lines of headlights undulating in the darkness, buses full of singing football supporters beering their way homewards from the big match, and juggernaut lorries unerringly finding pools to spray over my windscreen.

We drove back to the motorway café. Sue leaves her car there. It is convenient, only a few miles or so from where we live in our respective dwellings in apparent mutual disdain. Her car’s one of those long low things the size of a small bungalow, so we mostly use hers for our nocturnal discussions among the hedgerows. This
particular night, though, some kind guardian gremlin had nudged me into insisting that we use my own elegant conveyance, a mercifully nondescript little banger I’d painted dark blue to disguise the scrapes. Of course, Sue grumbled like mad, but I get these stubborn moods. In summer there’s lovely sweet grass to lie on. I could see her point. I telephoned from a booth in the hallway while Sue waited outside. The police station asked my name and address. I obligingly invented the name of a mythical Mr Witherspoon of Solihull, poor chap, and reported finding an overturned car and a man probably dead.

‘I stopped four cars for help,’ I lied to confuse the issue in case Old Bill got a rush of blood to the head and started filing our footprints. ‘They’re waiting there for you.’

I gave the name of a distant pub at Kelvedon. ‘In the taproom,’ I told him briskly. It was overdoing it a bit, but I like touches of local colour.

‘Wait there, please, Mr Witherspoon,’ the constable said, all efficient. ‘One of our cars will be with you shortly.’

‘You didn’t mention me, darling?’ Sue checked as I returned to the car. I said of course not. When we’re together in public she develops that reserved ultra-cool look of the secret sinner, a woman ever so polite but who obviously can’t really be bothered with this nerk opposite transparently boring her to death.

It was time to go, Sue being due back home. I raced out with her into the rain. We ran stiff and hunched, holding hands.

‘Drive safely, Lovejoy.’ The accident was on her mind.

We said a protracted farewell. Sue’s husband would be home about ten. She had a safe hour to spare when we finally parted, which is our usual safety margin unless passion’s particularly rampant. Sometimes we cut it pretty fine.

I waved her off into the streaming traffic and splashed back into the café’s brittle glare, but only when I was sure she wasn’t going to turn round with some afterthought. I still had some change. The emergency call had cost nothing. Tinker Dill would still be sober so early in the evening, thank God, even at the weekend. I’m so used to phoning him at the White Hart its number’s engraved on my cortex.

I got through first time. The public bar sounded crammed and noisy. Some charitable soul amputated Tinker from the bar and dragged him to the blower.

‘Whatcher want, Lovejoy?’ He was peeved as hell. ‘You seen me all bleeding day at the auction.’

‘Just listen, Tinker,’ I said, putting my threatening voice on. ‘And don’t radio what I say all round the pub.’ I felt his sulks come over, force five.

‘Shut up,’ I snarled. ‘I told you. Say nothing, just tell me if I missed anything.’ The White Hart’s one of those rambling old East Anglian pubs where antiques dealers congregate in droves. Even the woodworms have ears.

Gloria's Secret by Nelle L'Amour
Golden Ghost by Terri Farley
Down from the Mountain by Elizabeth Fixmer
Cold Winter in Bordeaux by Allan Massie
His to Protect by Alice Cain
Odd Apocalypse by Dean Koontz
A Catered Tea Party by Isis Crawford
Girls' Guide to Flirting with Danger by Kimberly Lang
The Mandie Collection by Lois Gladys Leppard
Falloir (Passion Noire Book 2) by Chase, J.D.