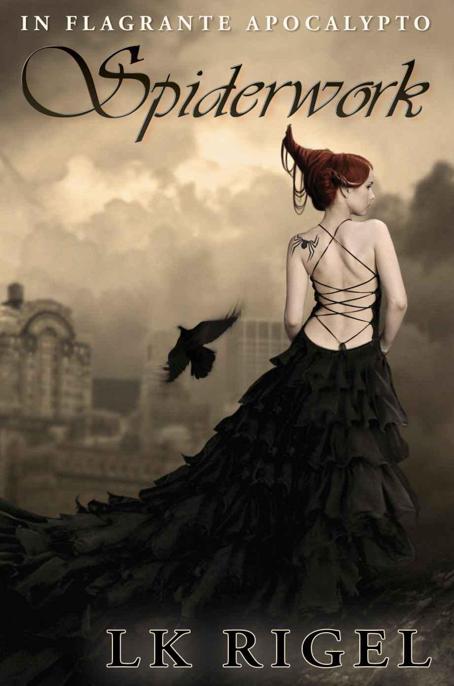 All Rights Are Reserved. No part of this book may be used or reproduced in any manner whatsoever without written permission from the author.
LK Rigel
http://www.lkrigel.com/
Also by LK Rigel
Space Junque (Apocalypto 1
)
Bleeder (Apocalypto 3)

The End of the World

Vain To Deny It

Durga and the Musician

Everything Dies In Garrick

Spiderwork
by
LK Rigel
The End of the World

At night everybody went out to watch the world fall down.

Last night the beach had been crowded with people from the compound at Corcovado. It was the best place to see the dazzling light show. Char sent Jake ahead with the blanket to get a spot for them on the sand while she went back for the jug of coffee she'd forgotten.

She ran into Durga and the other girls crossing the courtyard with their chaperone, the old woman they called the matriarch. They had been living in a boarding school outside Mexico City when the goddess Asherah commanded ten-year-old Durga to flee. Over three hundred people lived at the school, and only the matriarch and these girls had believed Durga.

Everyone else had thought the little girl was insane when she said a goddess had told her to go. Even when her hair turned blood red for no apparent reason. Even when the black widow spider tattoo appeared on her shoulder.

No one believed in gods, not really. The
religios
used sacred texts to justify their lust for power and control while they conveniently ignored the parts about love and forgiveness and caring for their fellow human beings. Hypocrites. Just like the enviros who spouted crap about defending the earth while they set off dirty bombs near power plants and hydro dams.

Char believed. She didn't want to believe, but she'd seen the goddess with her own eyes. She'd received her own divine commands. Her hair had been turned blood red too.

Durga's group had made it off planet to Vacation Station. Jake rescued them when he showed up in his shuttle, the
Space Junque
, to pick up his sister Rani.

"Wait," Durga called out. With her bangs cut straight just above her dark eyebrows, she looked like a child version of a red-haired Cleopatra. Her left shoulder was uncovered. Char had the impression Durga wanted people to see the black widow spider tattoo.

"My sister," she said to Char. "We're going up to the statue. Come with us." The statue was on Mount Corcovado, where they'd been teleported from the
Space Junque
by Asherah's command. Where Rani had died.

The show
. No one could bring themselves to say what it really was: The debris of satellites and ships destroyed, damaged, or crippled by the environmentalist terrorist group, the Defenders of Gaia. Only days ago, a hundred thousand people had been living in orbit. Likely some still lived there -- were dying there -- while vast amounts of space junk de-orbited and burned up in the atmosphere.

There was no way to bring them back to earth, and there was nothing anybody could do about it. The whole world was coming to an end.

"Thanks, but I'm meeting Jake on the beach."

"
Exgusting
.
" Maribel wrinkled her nose. She was only eight years old and Durga's opposite -- blonde and blue-eyed, fragile, sweet, shy.

Char patted her on the head. "Someday you won't think so." To Durga, she said, "I'll see you tomorrow." They were going to bury Rani up there in the morning.

It was a good thing Jake had gone ahead because the beach was already crowded with people from the compound. Char lay down on the blanket and tucked herself under Jake's arm. The sun dipped behind Mount Corcovado, and the streaks of light in the sky grew brighter. The night air was cold near the water, but it was fresh and clean, sweet to breathe.

"I never knew the world could be so beautiful." Since before she was born, the air had been too polluted to see stars very well. A clear view of the dazzling universe had been one of the attractions of Vacation Station, the orbiting resort of choice for the world's elite.

Jake kissed her forehead. "Before the
Junque
crashed, I went around a few times. There were explosions everywhere, on every continent, except for Garrick and Corcovado. It was like some mystical force shielded both places. But that's what a miracle is, right? Something impossible. Your Asherah must have spared these two places from destruction like she chose you and Durga."

"I don't know, Jake. What kind of god spares Garrick?"

"Ooh!" The crowd on the beach applauded as a larger meteor streaked across the heavens. Was it so easy to block from their minds what made that pretty light? It could be the cabin of a shuttle falling back into the atmosphere with people still inside.

"According to the old scriptures I studied in school," Jake said, "most of the gods don't make sense. It's part of the mystery."

"Well, I'm glad Asherah dumped us here instead of in Garrick. If the world is going to end, I don't mind spending my last days here."

Corcovado was pristine, like something from a historical holofilm. You could drink right from a spring. For the first time in her life,
Char
loved being in the world, just physically being alive. Breathing clean air. Feeling a breeze on her face. Tasting fresh water. Civilization had collapsed. The human race had finally destroyed itself. Perversely, she was happier than ever.

Multiple meteors streaked overhead at the same time. "Tell me again about Rani," Jake said. "What you saw."

Rani's soul. What else could it be?

"When you were lost outside the
Space Junque,
Asherah appeared with those beings she calls Empanii. There was one for each of us, and they had taken shapes of people each of us loved. The matriarch's son, Maribel's mother, my sister Sky. And you were there for Rani. The manifestations were so true. The sound of Sky's voice and the way she hugged me. She was wearing the mirror twin to my necklace."

"Empanii," Jake said. "Empathy. Empathic beings. They read your mind to find the form they take."

"The form and everything that goes with it. Mine knew exactly what I wanted to hear."

The glorious blazes continued above, unrelenting, and unchanging in frequency. The wind from the surf cooled, and the people around them began to collect their things and return to the compound.

"Rani recognized you -- the Empani you. She said your name. Sky put her arms around me, and then we were all on Corcovado, on the mountain. Sky -- my Empani -- was gone. Only the Jake Empani remained."

Another group of people walked by on their way back to the compound. One of the men smiled at Char. She recognized him, a cook in the courtyard bistro. He lunged toward her and grabbed her hair.

"Hey, what are you doing?" Jake pulled the guy away.

"I just wanted to touch Asherah's hair," the guy said. "I wanted to know."

"Get out of here before I turn you in to Geraldo," Jake said. "You could be banished from Corcovado for that."

Cripes. The guy turned even paler and ran away. "I was just joking."

"I know you were." Jake seemed amused by the whole thing. "But then, I know you aren't a god. You were saying, about Rani. The Jake Empani was still there, but the other ones were gone."

"I think that's when Rani died. Something came out of her, a shimmering version of her that rose into the air like vapor. My first thought was that it was her soul. I still believe it was of Rani. Rani's consciousness in some form. And I believe she was at peace."

They stayed on the beach until everyone else had gone, and they made love until the sun came up. They just had time to get back, take a shower, and hike up to The Redeemer, the gigantic sandstone statue, its head bent forward and its arms stretched wide as if accepting them all into some promised nirvana.

Durga and the girls were already there, along with the matriarch.

As Char put her arms around the little tyrant, she noticed Maribel holding her mother's hand. "Cripes!" She pointed at the two, walking away from the group toward the mountain's sheer drop-off.

Durga sprang toward them and grabbed the mother while everyone watched in stunned silence. As the Empani's eyes met Durga's gaze, it turned into a white heron. It flapped its wings and twisted out of her grasp and flew away.

They buried Rani's body in the ground about fifty yards from the statue base. It seemed odd how they clung to routine in the face of catastrophe. Breakfast, lunch, dinner, bury the dead.

"Rani was my sister. We had the same father." Jake was the first to speak. His words came slow through his pain. "And she was my best friend."