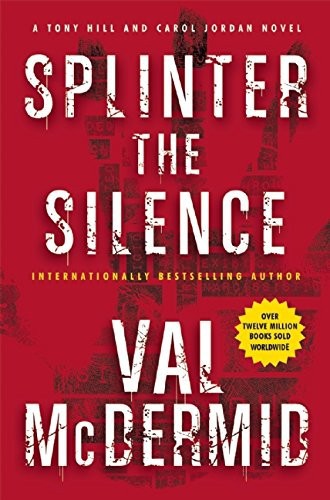 Val McDermid is a No. 1 bestseller whose novels have been translated into more than thirty languages, and have sold over eleven million copies. She has won many awards internationally, including the CWA Gold Dagger for best crime novel of the year and the
LA Times
Book of the Year Award. She was inducted into the ITV3 Crime Thriller Awards Hall of Fame in 2009 and was the recipient of the CWA Cartier Diamond Dagger for 2010. In 2011 she received the Lambda Literary Foundation Pioneer Award. She writes full time and divides her time between Cheshire and Edinburgh.

A Place of Execution

Trick of the Dark

The Wire in the Blood

The Torment of Others

Fever of the Bone

The Writing on the Wall

Christmas is Murder (ebook only)

A Suitable Job for a Woman

This one’s for Leslie Hills for all the

years of friendship – and because you, my dear,

refuse to be silenced.

‘I decided it is better to scream. Silence is the real crime against humanity.’

‘I have come to believe over and over again that what is most important to me must be spoken, made verbal and shared, even at the risk of having it bruised or misunderstood.’

W
eekends were best. It was easy to avoid working then. So it was easier to watch the women he was interested in. Mostly they didn’t go to work then either, so he had a chance to observe their routines and work out the best way to kill them.

He was good at watching. His teachers and later his employers had always commented on his attention to detail. How he would never attempt a project until he’d weighed up the risks and the possibilities. The first time he’d killed, he reckoned he’d still been in a state of shock, but even then he’d been able to make a plan and stick to it. Afterwards, he’d understood that act had opened a door to a mission. Now, his mission had assumed central importance in his life.

Like today. He hadn’t quite made his mind up who was going to be next. He had a couple of names on his mental list and he knew how he wanted to kill the chosen one. It was mostly a matter of figuring out whether the logistics would work. When you were planning on hanging someone, you had to be sure there was something to hang them from. And he was in no hurry. The latest one remained fresh in his mind, a source of deep satisfaction. Perfectly executed.

This one, though… she ticked all the boxes. But he wasn’t going to be rushed into making a final decision. Not like the first time he’d gone out into the wild, as he liked to think of it. Sitting here now, watching a house where nothing was happening, it was thrilling to summon up the memory. Exciting but unnerving too. So many ways it could have gone wrong.

She’d been alone. It was so unexpected, he’d forgotten how to walk and tripped over his feet. He grazed his knuckles against the brick wall, a rash of blood spotting the skin. He couldn’t quite believe it, but she really was alone. No minder, no driver, no PA, none of the chattering bitches she used to get her validation from. Just her, jogging down the five steps from her front door to the narrow sweep of gravel that divided her unfairly lovely home from the street where the likes of him were exiled. He half-expected the door to open again, one or more of her retinue to come blundering after her, running to catch up before she reached the gate.

But no. There was nobody. Only her.

He looked around wildly, his usual determination to blend in with the streetscape torn into confetti and scattered on the diesel breeze stirring the city air. But nobody was paying a blind bit of attention. Late afternoon in North London; nobody was paying any heed to anyone or anything outside their own tight little knot of concern, least of all to her. It wasn’t as if she was recognisable beyond the Twitterati. To the average person in the street, she was simply another North London thirtysomething. Designer jeans and a fashion hoodie hugging her unexceptional frame rather than hiding it, that year’s must-have leather satchel slung across one hip, multi-shaded blonde dye job caught back in a loose ponytail. Hardly worth a first glance, never mind a second one. Hard to believe anybody had ever taken any notice of anything she’d said or done.

Oblivious to his confusion, she opened the heavy iron gate with the gothic creak he’d grown familiar with lately. She closed it carefully behind herself and started walking.

He couldn’t quite believe it was happening. For three weeks, he’d been keeping tabs on her whenever he could manage it. And she never ever ventured out alone. Running scared, he’d decided. Not scared enough to shut up, but scared enough to make sure there was always somebody around to watch her back.

After the things they’d said to her the night before, she should have been hiding under the duvet, cowed into submission. Not striding along the pavement acting like she was the one with the moral high ground instead of acknowledging the truth – that she was a destructive, disruptive, dangerous bitch who deserved everything that was coming to her.

He’d not planned on dealing with her today. He hadn’t been expecting so golden an opportunity. But he wasn’t going to let it slip away. Who knew when he’d get another chance like that? And it wasn’t like he hadn’t worked it all out in his head a hundred times, testing every element of the plan for weak points and figuring out how to overcome them.

‘Get a grip,’ he chided himself under his breath, falling into step behind her, a few metres and a couple of teenage girls between them. He knew it could be a long while till he got her alone again. ‘Get a grip.’

Taking her off the street had been a lot easier than he’d expected. Women like her – middle class, secure in their status, used to the world running the way they wanted – had a false sense of safety. They trusted people until someone gave them good reason not to. She’d trusted him, because he made himself look and sound like all the other pathetic guys who let their women run the show – whipped into line and made into some bitch’s gutless slave.

He’d done his research. He knew the names that would make his bullshit credible. She’d believed the tale he’d spun about her radio station needing her in the studio to cover for a sick colleague. She’d got in the car without a murmur. And then he’d shown her the photos on his phone.

He’d been proud of that. He knew how to plot, how to plan, how to prepare. Her daughter, doing a foundation course at film school, had been laughably easy. He’d pretended to be a photographer doing a project about hostages and protest. He’d got three of them involved, so he didn’t look like a pervert singling out one girl in particular. Then he’d mocked up a series of shots of them apparently being held prisoner and tortured. And now he had a series of carefully edited shots on his phone that provided perfect leverage.

As soon as he showed her the first shot, she had frozen to stillness. A whimper from behind her closed lips. She’d pulled herself together and said, voice wobbling through an octave or more, ‘What do you want?’

‘It’s more about what you want. You want your daughter to come out of this alive, don’t you?’

‘That’s a stupid question,’ she said, a flare of anger lighting up her face.

He wasn’t having any of that. He took his left hand off the gearstick and backhanded her hard across the face. She cried out and shrank away from him. ‘Don’t make me call her babysitter. You won’t like what happens to Madison if I have to do that.’ He snorted. ‘Madison. What kind of fucking name is that? We don’t have any limits. We’ll cut her, we’ll rape her, we’ll leave her so nobody will ever want to touch her again. Except out of pity. So do what the fuck you’re told.’

Her eyes widened and her mouth formed an anguished O. He had to admit, there was real pleasure in seeing her pay the price for her bitching and whining and moaning. She’d called men like him misogynists. That was the opposite of what they were. Men like him, they loved women. They understood the kind of life that suited women best. They knew what women really wanted. Proper women didn’t want to be out there in the world, having to shout the odds all the time. They wanted to build homes, take care of families, make their mark and exercise their power inside the home. Being women, not fake men.

A Little White Death by John Lawton
Red Hot BOX SET: Complete Series 1-4: A Patrick & Steeves Suspense by Kate Fargo
New Species 05 Brawn by Laurann Dohner
We Are All Made of Stars by Rowan Coleman
The Portrait of Doreene Gray by Esri Allbritten
The Principal's Office by Jasmine Haynes
Edge by Michael Cadnum
The Psalter by Galen Watson
Liar Liar by Julianne Floyd
Taken by the Enemy by Jennifer Bene